Tom Tancredo on Leaving Guv's Race, Being Called a C*cksucker

Tom Tancredo squeezing the trigger in a photo from the recent slideshow "How Some of Colorado's 2018 Gubernatorial Candidates Relax." Photo by Kenzie Bruce
On January 30, Tom Tancredo announced that he was dropping out of the 2018 Colorado governor's race, and in talking about his reasons for doing so, he speaks in the sort of unfiltered manner that is incredibly rare for any politician, no matter his ideological beliefs. Take these comments about the angry mood among some members of the electorate as epitomized by Internet trolls.

"The rhetoric is so vitriolic that it just oozes hatred," he says. "You could post something on Twitter that said, 'Gosh, what a lovely day,' and someone would say, 'You no-good, racist, MF, son-of-a-bitch cocksucker. Who cares what kind of a day you think it is?'"

According to Tancredo, the day he knew he'd have to pull the plug on his campaign was January 15, "and the reason why is because we set that as a threshold. A couple of weeks before I actually announced that I was running, recognizing all the things we'd have to deal with, we looked at what we'd raised during the same period four years ago," when Tancredo came up short in the gubernatorial contest with John Hickenlooper. "And we set $150,000 as our threshold, which we thought at the time was very conservative, because we'd raised almost three times that much last time."

By the 15th, though, "we'd raised $75,000," Tancredo continues, "and there were no prospects of an IEC" — an Independent Expenditure-Only Committee, which can raise big-dollar sums for candidates.

Shortly thereafter, Tancredo decided to step down, even though he firmly believes he had more popular support than any other Republican gubernatorial hopeful, including state treasurer Walker Stapleton, the moolah-collection leader by a large margin.

"If the frontrunner drops out, it leads to speculation that something else has to be going on," Tancredo allows. "But honest to God, this is the truth of the matter. We had established a threshold, we didn't meet it, and we recognized that moving any further down that line would jeopardize a lot of things. What if I won the primary — and as I say, it was looking good — but only had a few bucks? We would have had the media, especially Channel 9 and the Denver Post and the Colorado Springs Gazette, all freaking out over my candidacy. That brings you to the realization that you can't rationalize, because you'd be risking too much with far too few odds in your favor." 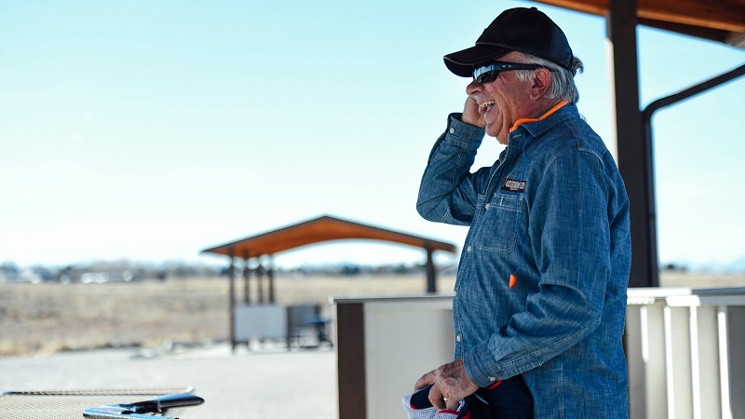 Tom Tancredo chatting at a local gun range, as seen in a photo from the recent slideshow "How Some of Colorado's 2018 Gubernatorial Candidates Relax."
Photo by Kenzie Bruce
In an interview last November, Tancredo doubted the Republican establishment would offer much in the way of financial backing to him. But does he really think the money tenders would have stiffed him if he'd prevailed in the primary? Short answer: probably.

"I think if the Republican Governors Association had seen polling numbers that showed me to be a viable general-election candidate, they might have offered some support," Tancredo allows. "But the Republicans in Colorado...I don't know if they would have given me anything no matter what. Most of these folks are crony capitalists to begin with, and what they want is a cozy relationship with the government. They believe the government is mostly there to provide services for them, and they certainly hate my position on illegal immigration. So I don't think many of them would have come in no matter what."

Did such forces conspire to starve his candidacy in order to clear a path for Stapleton? Tancredo doubts it.

"I don't think there was a conspiracy," he says. "It's not like a group of people were meeting in secret to create that phenomenon. It's just the way it is. Nobody has to create it. Walker Stapleton is the ultimate insider, and I'm the ultimate outsider — and nothing has changed except that, in the past, I was able to raise enough money to make things doable, at least from my point of view. I raised $1 million the last time during the primary. But we weren't going to be able to get anywhere near that this time."

Why not? Tancredo suggests that he may have been perceived as past his sell-by date. "There's a certain attitude about time — that there's a time for everything, and frankly, my time may have come and gone in the minds of a lot of people who were at one point supporting me. They may be thinking, 'He can't get it done, so I'm not going to do that anymore.' And look at what the Republicans have raised against the Democrats altogether. No Republican except Walker has raised squat, while the Democrats have all raised hundreds of thousands of dollars. And, of course, Jared Polis doesn't need to raise anything." 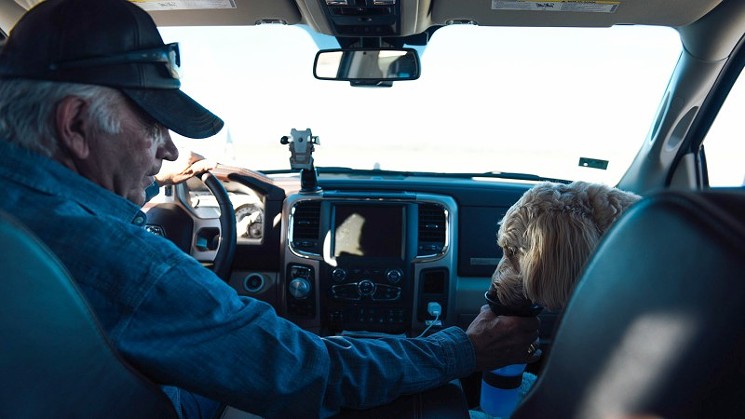 Tom Tancredo and his miniature goldendoodle, Sasha, as seen in a photo from the recent slideshow "How Some of Colorado's 2018 Gubernatorial Candidates Relax."
Photo by Kenzie Bruce
Polis, among the wealthiest members of Congress, has said he will spend some of his personal fortune on his campaign, and that's worrisome to Tancredo for more reasons than one.

"At this point, I will endorse the Republican candidate, because the alternative is so bad," he maintains. "That's another reason why I got out: I don't want to risk it. Jared Polis is a radical leftist. Even though he's trying his best to become a moderate in the eyes of the general public, I think he's beatable — but the only way you can beat him is to have enough money to pull back the curtain and show who's really behind it. Jared Polis is not Mr. Moderate, but he has so much money that he can concoct the kind of picture he wants."

To counter such efforts, Tancredo goes on, "Maybe Walker can go through his Rolodex" — a reference to Stapleton being a member of the extended Bush family that has already given the United States two presidents. "And if he looks like he could be a viable candidate, that should convince the Republican Governors Association to help. But it's going to take a lot."

In Tancredo's view, Stapleton will also face Colorado voters' traditional antipathy for any candidate portrayed as inevitable: "That's absolutely something he's going to have to overcome. I would have had to prove that I'm not the Devil incarnate — not a wild-eyed racist who meets on Lookout Mountain with others wearing sheets. But Walker will have to defend himself against being that ultimate insider, and I hope he has the ability and I hope he's successful, if he's the nominee."

Meanwhile, Tancredo has a firm grasp on his sense of humor. When he's told that his departure makes the governor's competition less interesting, he laughs. "I wish that I could have kept it interesting for everybody, including myself," he admits. Despite those online attacks, he says, "I still enjoy the arena — so I wish I could have made a better run at it."