Art Attack: A Second Friday Weekend to Remember in Denver See work by Denver artist Elena Gunderson in Heads of Hydra's group show End of the World 2.0 at Bardo Coffeehouse. Elena Gunderson
This post-First Friday weekend is packed with diverse offerings, beginning with more art from Gregg Deal, a member of the Pyramid Lake Paiute tribe and a powerful voice for RedLine’s Roots Radical Indigenous programming series through the coming year. Deal’s show drops as one centerpiece of the art center’s 2022 48 Hours of Socially Engaged Art & Conversation event.

Beyond that, Heads of Hydra is offering a strong group show at the Bardo Coffeehouse, and Talk Gallery does the same in Englewood, both in the South Broadway corridor; Pirate cedes some space to the BRDG Project for the topical group show Woe v. Rade; and Ana Anu champions the wisdom of female elders at Leon.

That’s the icing; it’s your job to find the rest of the cake. Happy Second Friday weekend, Denver.

Rough Gems presents: What a Gallery Wants
Union Hall Denver, 1750 Wewatta Street, Suite 144
Saturday, August 13, 10 a.m. to noon
Free, register in advance at Eventbrite
Local artists MG Bernard and Max Kauffman have been around the block a few times, juggling self-marketing and curatorial duties in addition to making art. They will be implementing their combined knowledge and experience to lead What a Gallery Wants, a proactive free workshop for artists needing help with the jobs of self-presentation, networking, finding alternative spaces and financing new avenues — all viable ways of getting work on walls. Ana Anu champions the wisdom of women elders in the exhibition Call Your Grandmother!
Ana Anu, Leon Gallery
Ana Anu, Call Your Grandmother!
Leon Gallery, 1112 East 17th Avenue
Saturday, August 13, through September 24
Opening Reception: Saturday, August 13, 6 to 10 p.m.
A poet as well as an artist, Ana Anu examines the world from a feminist stance in books of poetry, with a third, called Crone-Ology, on the way later this year. Call Your Grandmother! runs parallel to the book, a treatise against what Anu calls the “social erasure” of elders and its prominence in Western culture, and why it should be disposed of. Considering how much of our lives seem to be run by old white men, perhaps it’s time to even up the stakes and take advantage of the wisdom of elder women. "Dreams Are Real," in Zoid Ham's Black Dreamscape at the Storeroom.
Zoid Ham
Zoid Room: The Black Dreamscape
The Storeroom, 1700 Vine Street
Closing Reception: Saturday, August 13, 6:30 to 10 p.m.
African-American poet and visual artist Zoid Ham will sign off on his window display at sidewalk gallery the Storeroom with a closing reception on Saturday evening. An immersive blend of performance, mixed-media art, fashion, poetry and storytelling, The Black Dreamscape is meant to lead to a brighter and more equal future, expressed in all of Ham’s many disciplines. A serene Colorado landscape by Molly Davis.
Molly Davis
Art Inspired by the Land
Canyon Gallery, Boulder Public Library, 1001 Arapahoe Avenue, Boulder
Through September 18
Performance Night: Thursday, August 18, Canyon Theater, 4 to 6:45 p.m.
Get down with nature at the Boulder Public Library’s Canyon Gallery, where Art Inspired by the Land will visually whisk you away into the serene, non-urbanized spaces in and surrounding Boulder. Hosted by Boulder’s Open Space and Mountain Parks department, the group show will be accompanied by an August 18 performance night at the library, with musicians, songwriters, poets and filmmakers showing inter-arts appreciation for nearby wild places and imagery from the exhibition. Gregg Deal, “Textile Series No. 3.”
Image credit: Wed Magyar
End of Silence: A Punk Survey
RedLine Contemporary Art Center, 2350 Arapahoe Street
Through October 9
Gregg Deal is 21st century all the way, with a masterful multi-disciplinary practice that contemporizes the Indigenous brushback against the continuing effects of colonialism and the disenfranchisement of Native communities over centuries. He’s the perfect face of RedLine’s Roots Radical exhibition and programming schedule for 2022 and 2023, which passes the stage over to Indigenous voices, including Deal’s, whose show End of Silence: A Punk Survey combines the gifted artist’s stance with punk values, activism and an in-your-face aesthetic. The exhibition opens at RedLine during its 48 Hours of Socially Engaged Art & Conversation Summit this weekend, with a reception and performances. 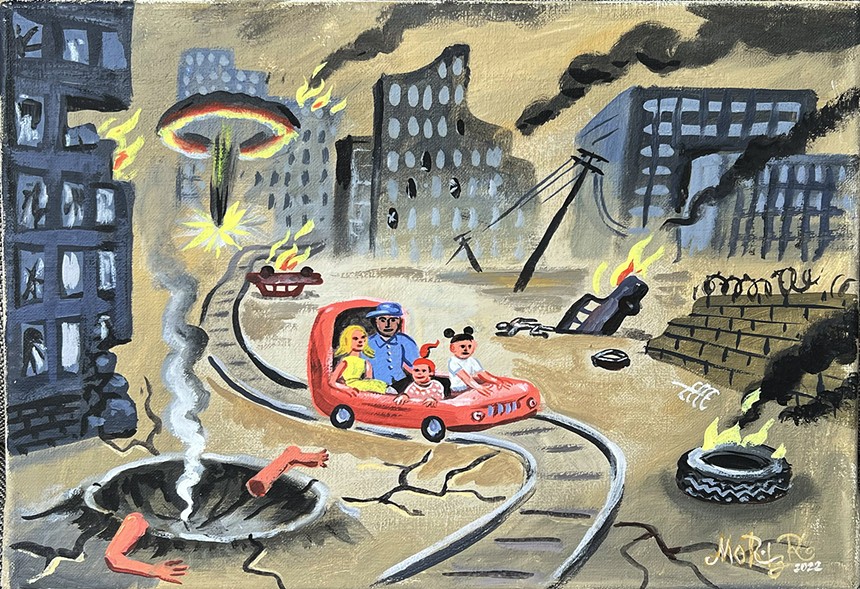 Moritz Reichelt (aka Moritz R®), “Joyride in the Wastelands,” 2022, acrylic on canvas.
Moritz Reichelt (aka Moritz R®)
Heads of Hydra: End of the World 2.0
The Bardo Coffeehouse, 238 South Broadway
Heads of Hydra, the continuing anti-curatorial project of Richard Alden Peterson and Dave Seiler, will quietly open a bit of a blockbuster at the Bardo Coffeehouse: End of the World 2.0, a group show with more than twenty artists on the local, national and international spectrum, including lots of familiar names from Colorado. Musician Roger Green, best known as former guitarist for the Czars and a sideman with Porlolo, Glenn Taylor and the late Ron Miles, will provide entertainment for the crowd. Don’t sleep through this sleeper. 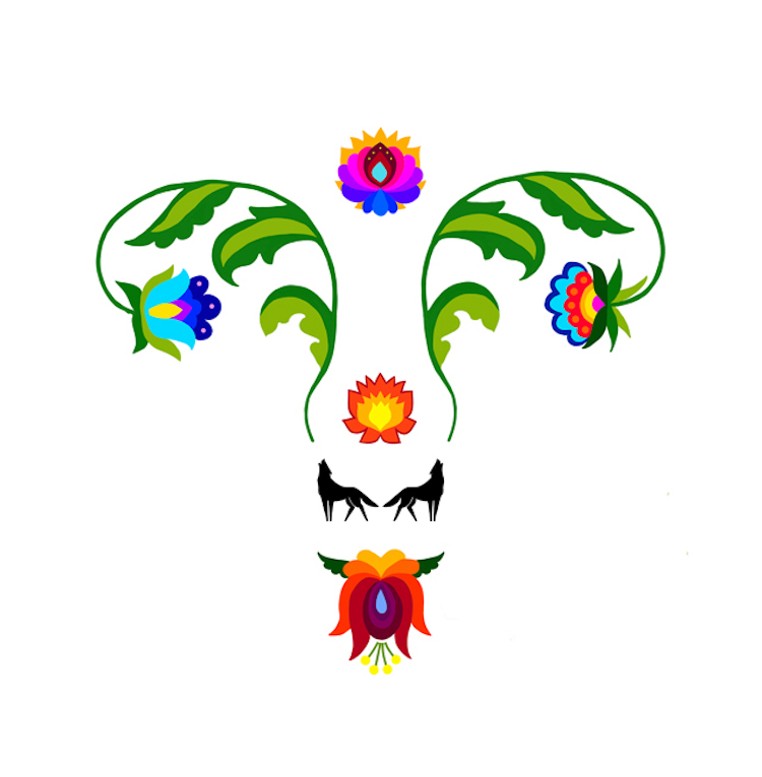 Julie Jablonski, “She Howls.”
Julie Jablonski
Woe v. Rade
Gwen Gehrke, 360 Degrees of Denver
Pirate: Contemporary Art, 7130 West 16th Avenue, Lakewood
Through August 28
The roaming BRDG Project guests at Pirate with a pointed group exhibition unapologetically called Woe v. Rade. Curated by local artist Jasmine Abena Colgan, who put together the words “woe,” aka “a condition of deep suffering from misfortune, affliction, or grief,” and “rade,” meaning “afraid, scared, terrified, fearful” (perhaps in Old English, to be fair), to express the conundrum of American women, whose right to choose recently got kicked back to the Dark Ages. Will the show make you feel better or worse about the situation? If nothing else, it will surely convince viewers that there’s work to be done if we’re going to fight the power.

Group Show
Talk Gallery, 4382 South Broadway, Englewood
Talk Gallery put out a call to artists who’ve shown there in the past or are scheduled to show there in the future, and that call was answered by fifteen or more friends of the gallery, from Mark Brasuell to Peter Yumi — with a whole high- and lowbrow collection of other local favorites in between. Think of it as a preview of Talk’s near future and a first chance to view new works from those who’ve already hung a show there.

Balefire Goods hosts a show of Jaimie Rudy's embroidered photographs.
Jaimie Rudy
Jaimie Rudy, Now Here Nowhere
Balefire Goods, 7513 Grandview Avenue, Arvada
Through September 3
Artist Jaimie Rudy’s embroidered photograph and postcard series, called Howdy From the Middle of Nowhere, comments on the warning signals raised by the divide between candidates (and voters) on issues like climate change during and after the 2016 election. By stitching ominous visuals and messages on idyllic photos of the untouched outdoors, Rudy sends out warning signals to disturb our nostalgia for pristine places.

Mug Shots
Urban Mud, 530 Santa Fe Drive, 720-271-9601
Through September 30
There’s little question about what the title Mug Shots suggests the new show at the ceramic studio/gallery Urban Mud is all about: It’s the mug, perhaps the most egalitarian and iconic clay creation, perfectly functional and beautiful at the same time. Everyone has a favorite mug. Maybe you’ll find yours here.

The Transformed Self: Mexican Mask Collection
Center for the Arts Evergreen, 31880 Rocky Village Drive, Evergreen
Through September 9
An exhibition of the late Dr. Sam Yousem’s private collection of hand-carved ceremonial performance masks from different regions of Mexico is just the start of this new show at CAE. Shown alongside the contemporary artwork of five local Latinx artists — steeped in Aztec lore and design cues from traditional craft — viewers will be rewarded with more context on the Mexican cultural stories from the lore that powers these beautiful masks. Arturo Garcia, Jose Mares, Norberto Mojardin, UC Sepia Ozjuah and Xencs L. Wing are the painters, muralists, crafters and fashion mavens who take the exhibition to the next level.

Jini Kimchi shares her politicized linocuts at Spectra Art Space.
Jini Veenker
Jini Kimchi, Familiar
Spectra Art Space, 1842 South Broadway
Through August 22
Korean-American linocut artist Jini Veenker (aka Jini Kimchi) works with the goal of gaining more exposure for women of color. To drive in her point, she makes prints, some of them quite large, of unsmiling women and creatures who might look whimsical at a glance, but reveal themselves to be something darker in a closer look. As Veenker notes, “Life is beautiful, but it is also a violent jungle.”

Nychos, "Enter the Rainbow."
Nychos, Mirus Gallery
Nychos, Enter the Rainbow
Mirus Gallery, 1144 Broadway
Through September 28
Like many urban artists, Austrian painter Nychos started out in comic art and wall writing before moving on to murals and lowbrow fine art. He eventually found his niche: dissection paintings of bodies, human and animal, revealing each layer under the skin. In Enter the Rainbow, viewers will see the evolution of this style over the last ten years or so, as the artist spends less time with physiological accuracy and lightens up the imagery with color and streamlined translucence.

Progressive BBQ
The Hub at 40 West, 6501 West Colfax Avenue
Saturday, August 13, 4 to 6 p.m.
If you haven’t been to the Hub at 40 West, now two First Fridays into the Lakewood art scene, here’s another reason to check it out: The multi-gallery community that’s now happily at home in the large, renovated building that once held the Denver Drumstick is hosting a free, family-friendly Progressive BBQ, with different dishes — and art bites, too — at each space.

Patrick Marold, "The Windmill Project."
Ent Center
Patrick Marold, "Windmill Project"
Ent Center for the Arts, 5225 North Nevada Avenue, UCCS campus, Colorado Springs
Through October 31; learn more here.
Way back in 2020, when arts life everywhere came to a near halt, the Galleries of Contemporary Art at UCCS (GOCA) in Colorado Springs mounted a constellation of outdoor public sculptures as part of The Space(s) Between. One of them, Patrick Marold’s stunning “Windmill Project,” a site-specific grid of LED-lit windmills on posts, originally scheduled to stand for a year, is still there through October 31. While the installation is open any time, a map, online video guide and additional information will provide further insights and instructions, and you can choose to view the wind-driven light show at sunset, after dark or whenever it suits you.