Art by Corey Dean Wagner. Corey Dean Wagner
Buck Adams, founder of the Denver-based Art for Redemption, isn’t sure why he chose Lady Liberty superimposed over a map of the United States as the theme for an interactive mural built from individual pieces of art made by incarcerated people.

It just kind of came to him.

"America’s the land of second chances,” Adams says. “Lady Liberty is a chance for everyone to be equal. As humans, it’s pretty much guaranteed that we will make mistakes, some worse than others. To be forgiven and to be able to pay your penance and move on is also part of humanity.”

The mural, which will be formally unveiled on August 5 in the RiNo Art District, includes augmented-reality messages about mass incarceration accessible through an app. The mural is expected to stay up for at least six months. The unveiling also serves as a fundraiser for a coffee-table book of inmate art, the launch of an NFT marketplace, and the expansion of the group's print-on-demand marketplace.

Moving on after prison can be easier said than done, Adams admits, especially in the United States, where a felony conviction can make finding work and housing a difficult prospect. Conviction can also come with expensive fines, parole fees and restitution that many inmates cannot afford. Being in prison also costs money, as inmates pay for phone calls to family or friends and food not served in the cafeteria.

“While I was in prison, I made $7.50 a month for my job inside of prison,” Adams says. “I was lucky and had a huge support network and a lot of friends and family and a very dear friend who helped take care of me, and I had some wherewithal of my own. But a lot of guys don’t. I was at visiting time, and I overheard this guy saying his last visitor was in 1989.”

Adams saw all this firsthand doing time in prison — or on “state-funded vacation,” as he puts it — following an assault conviction. He says he was let out early because he set up yoga and meditation programs, which convinced the court to reduce his seven-year sentence. He also worked with Defy Colorado, a nonprofit that inmates and people with criminal histories develop entrepreneurial skills. 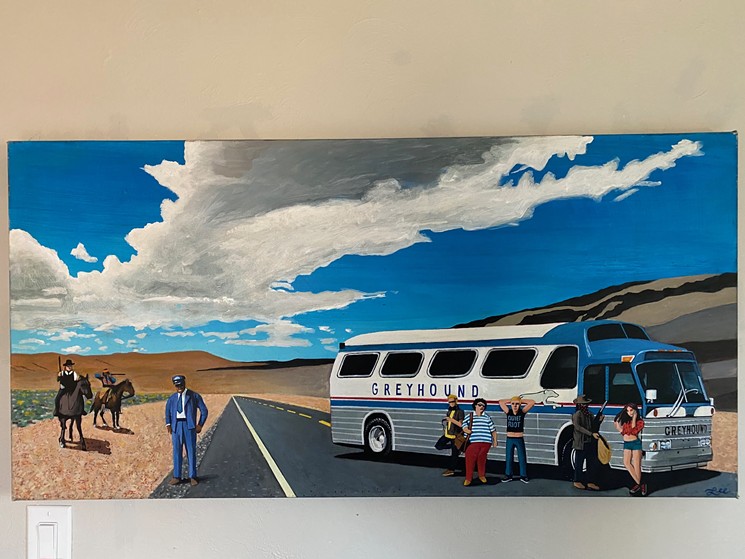 “Prison is a predatory place,” he says. “You can find yourself getting mixed up in things that will maximize your time.”

But Adams also recalls the art his fellow inmates made...often without a way to sell their pieces for cash. “I saw a ton of human creativity and talent,” he says. “I learned through the prison system that they were just trading that talent for jars of peanut butter and packets of tuna or a book of stamps.”

Witnessing that eventually gave Adams the idea for what would become Art for Redemption. He wrote a business plan and started working on making the organization a reality when he was released from prison. He hopes that helping inmates gain some modicum of financial independence, through making and selling art, will also help reduce the high recidivism rates among convicted felons.

The average recidivism rate for the nation is 80 percent, and 70 percent in Colorado, according to Art for Redemption. Even if a portion of the income an inmate can earn from art goes to things like paying restitution or child support, for someone leaving prison, having any money is better than walking out the gates flat broke.

“When you get out, they give you a bus voucher, a backpack, a pair of khakis, a purple shirt and a pair of black velcro sneakers,” Adams says. An extra $25 to $50 a month from art income can be life-changing, especially if an inmate can save for when he or she is released.

Art by Westley Ybarra.
Westley Ybarra
He considers the work of most of the inmates to be outsider art. Much of it is done with pencil or ballpoint pen. It’s often pictures of women, but skulls are popular, as is tattoo flash art. Most of the art created in prison over the past year has been small, because inmates were largely confined to their cells because of COVID-19 restrictions and didn’t have access to paintbrushes and other art supplies.

He’s found that many who mastered their craft want to help others learn to draw and paint. Art, Adams says, is also a creative outlet for people struggling with mental health issues.

“There’s a lot of mental health issues inside of prison, as I’m guessing you can imagine,” he says. “The art side of things, I think, allows a lot of people to work through those emotions and feelings and get in better touch with things that have happened to them or what they did.”

The app for the mural can be downloaded at Zappar. Buck Adams and Colorado Department of Corrections Executive Director Dean Williams will speak at the unveiling, from 5:30 p.m. to 7:30 p.m. on Thursday, August 5, at 3722 Chestnut Place. For more information, visit Art for Redemption online.

Correction: An earlier version of this story described Art for Redemption as a nonprofit. It is not.
KEEP WESTWORD FREE... Since we started Westword, it has been defined as the free, independent voice of Denver, and we'd like to keep it that way. With local media under siege, it's more important than ever for us to rally support behind funding our local journalism. You can help by participating in our "I Support" program, allowing us to keep offering readers access to our incisive coverage of local news, food and culture with no paywalls.
Make a one-time donation today for as little as $1.