Review: An A+ Performance Helps Educating Rita Get a Passing Grade 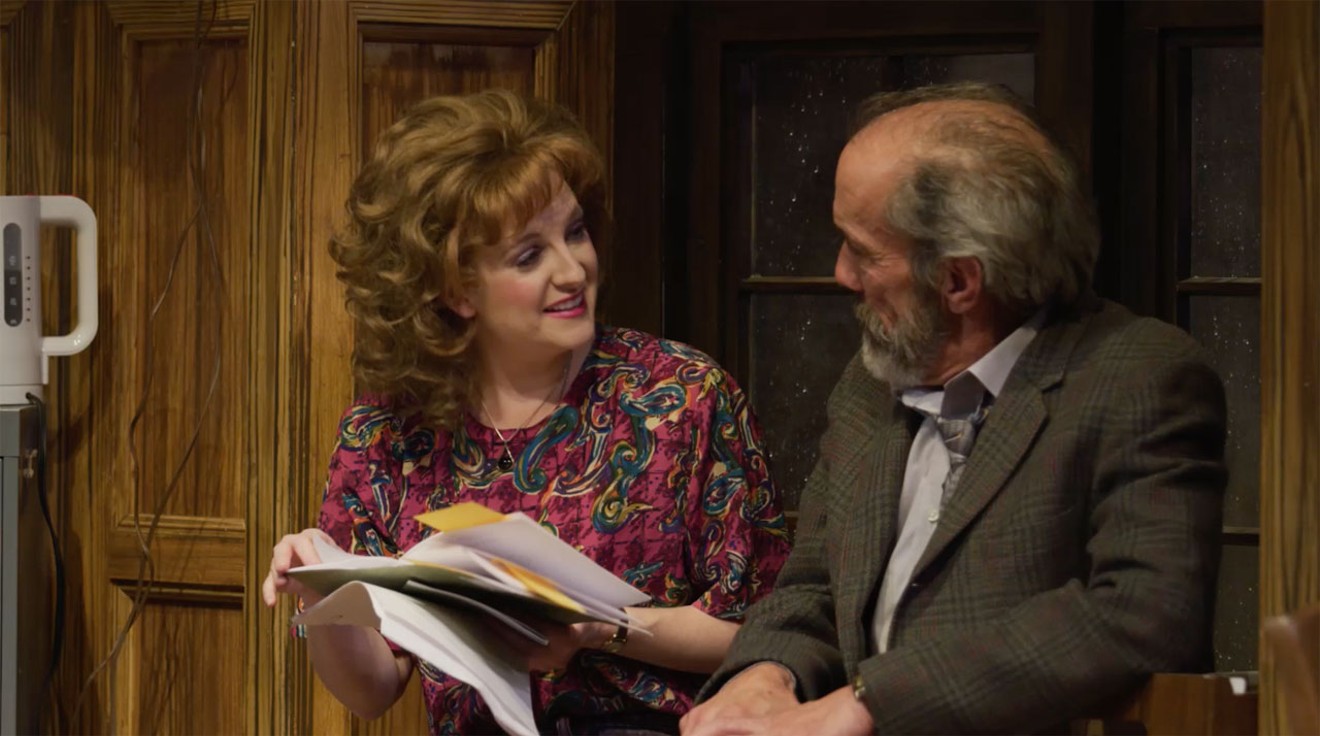 Emily Van Fleet and John Hutton in Educating Rita. The Arvada Center
For a long time, most people in the United States didn’t believe class distinctions existed here. When Roseanne premiered in 1988, there was a lot of talk about the creators’ originality in bringing the topic to the fore and showing the realities of life for a working-class family. More recently, there’s been the underrated sitcom The Middle, in which a family with three children shops for discounted foods and struggles with bills. These days, between the faux populism of Trump and the concern of progressives about working folks, we’ve seen a partial coming to consciousness.

England, however, has had an acute awareness of class since the nineteenth century, and a robust and specific working-class culture. So when Liverpool hairdresser Rita, passionately hungry for an education, bursts into the study of Frank, a university professor, in Willie Russell’s Educating Rita, now at the Arvada Center, she’s entering a different world. Everything is a source of interest and wonder, including the warm, book-lined study itself; the clothes that students wear; the kind of wine to bring to a dinner party he’s invited her to (she brings plonk, realizes it’s inferior and ends up not going inside). Most of all, she’s impressed with Frank’s ideas about literature, ideas he himself finds obvious and somewhat boring. And this bright, lively young woman is equally mysterious to Frank. As Rita comes to appreciate ballet, art and books — ignoring her husband’s objections that the girl with whom he fell in love is disappearing — she also finds herself feeling lost in an undefined space, neither part of her own culture nor belonging in Frank’s.

Educating Rita is the season’s first offering from the Arvada Center’s Black Box repertory company, and in some ways it seems an odd one. A gently funny two-hander that never quite finds its spine, the play was written in 1983, and though artistic director Lynne Collins has occasionally reached into the past for her repertoire — including a stunning Waiting for Godot last year — the company’s most memorable productions have been such sizzling contemporary works as The Drowning Girls, The Electric Baby and Kate Hamill’s adaptation of Sense and Sensibility, with its frenetic cast and dancing furniture. Educating Rita meanders. It starts following hares that it never chases down. Frank is concerned that Rita will lose her uniqueness if she learns to think and critique like a conventional student, but it’s hard to say if she does or doesn’t as she plunges into the university world, talks poetry all night long with her friends, finds interesting secondhand clothes and adorably ridiculous hats, and turns her flyaway hairstyle into a mass of brown bubbles. There’s no climax or resolution to the story, only Rita’s growing confidence and Frank’s slow dissolution.

Still, there are good reasons to see this production. One is that it extols the value of education: We read about Afghan girls desperate to get to school, girls in sub-Saharan Africa thirsty for the knowledge they can’t reach and, of course, Pakistani Nobel winner Malala Yousafzai, shot in the head for her advocacy and founder of the Malala Fund to help such girls. On a far less lethal scale, poor and working-class people in both the States and the United Kingdom know education can be a way out of poverty — not just physical poverty, but poverty of spirit and intellect.

Another reason to see it is the return of fine veteran actor John Hutton to the stage, and the hope that it portends more local performances. It’s unfortunate that the character of Frank is underwritten, however, and not very original; we’ve seen this world-weary, alcoholic professor who long ago gave up on his own writing ambitions many times before.

Then there’s Emily Van Fleet’s rich portrayal of Rita, a woman who is neither a stereotype nor a symbol. She’s funny, engaging, self-aware and, in some ways, smarter than Frank. I’m no Liverpudlian, but one of my best friends at grammar school was, and though it may seem a small technical thing, Van Fleet’s accent strikes me as a major achievement. People from Liverpool are nasal, “work” and “learn” become “werk” and “lern” in their mouths; they squeeze their sentences. The way Rita talks is essential to who she is, and it speaks volumes that Van Fleet paid such meticulous attention to it.

Education can indeed pay off, as her A-plus performance illuminates a B-level script.

Educating Rita
Presented by the Arvada Center through November 11, 6901 Wadsworth Boulevard, Arvada, 720-898-7200, arvadacenter.org.
KEEP WESTWORD FREE... Since we started Westword, it has been defined as the free, independent voice of Denver, and we'd like to keep it that way. With local media under siege, it's more important than ever for us to rally support behind funding our local journalism. You can help by participating in our "I Support" program, allowing us to keep offering readers access to our incisive coverage of local news, food and culture with no paywalls.
Make a one-time donation today for as little as $1.