Phillips is the director of Earth Force Climate Command, a nonprofit whose slogan, "Earth is sexier than Mars," is presented on a sleek website that mimics the likes of Space X. The group is a "network of established and emerging artists, activists, design thinkers and local organizations around the world who are helping to prototype and implement community visions and solutions for the future," according to the site.

And one of those prototypes is landing in Colorado: The Aspen Space Station: Wild Future Outpost will activate numerous installations, gallery shows and events throughout the mountain town and the surrounding area from Saturday, July 23, through September 11.

A red sign shows the three key aspects of EFCC.
Courtesy of Earth Force Climate Command
This is the second time that EFCC has held the event in Aspen, and its team there has grown from four local artists to eleven. "This year is going to be all over," says Phillip. "We're going to be part of Intersect Aspen, which is the art fair that's here the first week of August; we're doing a workshop at the Aspen Art Museum; we're going to be in front of the Red Brick Art Center. And then we have a lot of installations and kind of experiential workshops that are in locations that are only given upon registration." (To register, you'll have to take EFCC's Future Proof Exam and email Phillips at [email protected])

The idea for space stations as a means of climate activism came to fruition far from Aspen. EFCC began in 2019 as a project for refugees in Kenya to become involved with their new environment. Refugees "often have this sense of having no identity or direction, and people have a tendency to look at them as being a burden on the places that they've come to," Phillips explains. "So we were thinking about how we can change the story, and we thought, 'What if we made Earth Force Climate Command, where they are becoming members and they're helping to save the environment or work on climate projects in the countries that they moved to?' That was the original impetus."

While working on alternatives for refugee housing on remote Lamu Island, about sixty miles from the Somali border, Phillips found the "antithesis of space fantasy narratives," she recalls. There were no cars; everything was moved by donkeys or boats. Inspired by basket-like structures on the island, she began to wonder: "What if we built a space station on Lamu?" 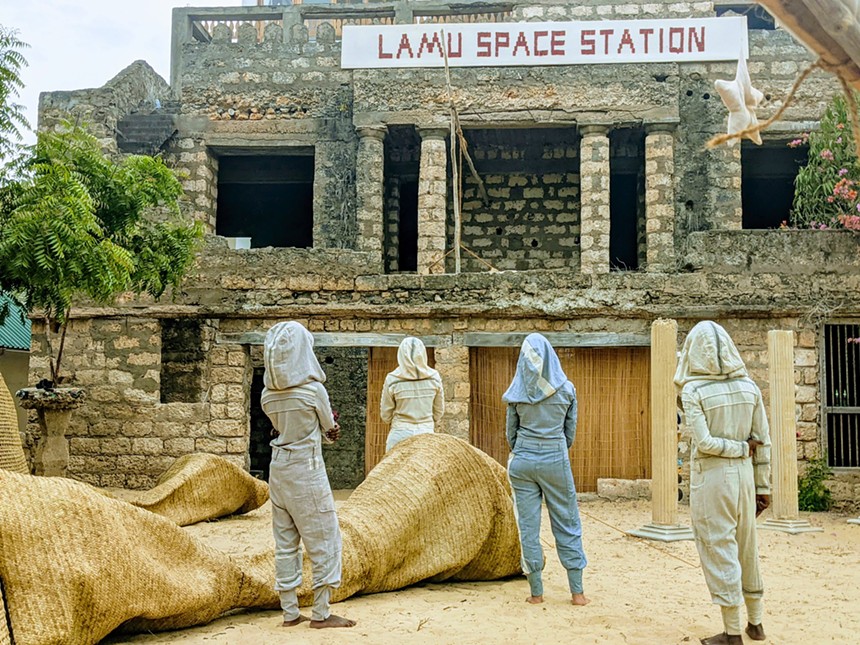 The first EFCC space station was mounted in Kenya.
Courtesy of Earth Force Climate Command
"How do we imagine hyperlocal futures? There's this sort of budding local futurism movement that I think we're very much part of," she says. "What if we have to create a fantasy just based on whatever resources we have at hand in our own location? Because most of us are probably not going to go live on Mars. So the project kind of grew out of that zeitgeist."

EFCC has three basic aspects to its agenda: first, to stay on Earth; second, to enjoy it; and third, to "stop thinking we can torch this planet and then escape to another one," Phillips notes. EFCC has mounted space stations to promote that agenda in Lamu, Lesvos and Khartoum. It will return to Kenya in the winter to build another in Nairobi.

Phillips created a storytelling narrative for the Wild Future Outpost that each of the artists expounds upon through their space stations. This year's plot takes place in the year 2222, with the artists as a "group of scientists, ecologists and natural philosophers who are traveling through this region studying it because forest fires led to the whole West being abandoned for almost 200 years," Phillips explains. "We're...trying to understand: Why did this climate collapse event happen? How has the Earth recovered as time has passed?

"And that was sort of the prompt for the artists. From there, people submitted proposals and ideas based around the narrative, [and] obviously, you can go in many, many, many directions with that," she continues. "I generally kind of keep it pretty open-ended once we've developed the basic storytelling structure to allow the artists to develop their own ideas."

Each space station in Aspen is meant to address a different set of challenges, highlighting futuristic visions as well as placing at the forefront how we should enjoy the beauty around us. Phillips is the artist behind "Sky Bath," a ten-foot-high platform for people to climb up and sky-gaze. "There is a bed that has been built into the tower, and then people lie on the bed, and then you're kind of in the sky. You can experience space very easily," she notes. "You only have to climb ten feet."

Aspen will also witness its first NFT exhibit through the work of DJ Furth, which will be displayed in a mining cabin on Aspen Mountain; there will be an opening-night showing. Furth will also give a talk on NFT art at Hexton Gallery. The NFTs are part of a series called Portraits of An Other, displaying what Furth imagines that people would look like in 200 years if humans merged with androids. The result, Phillips says, is a 90 percent human with some unsettling details that cue the viewer into the android narrative. 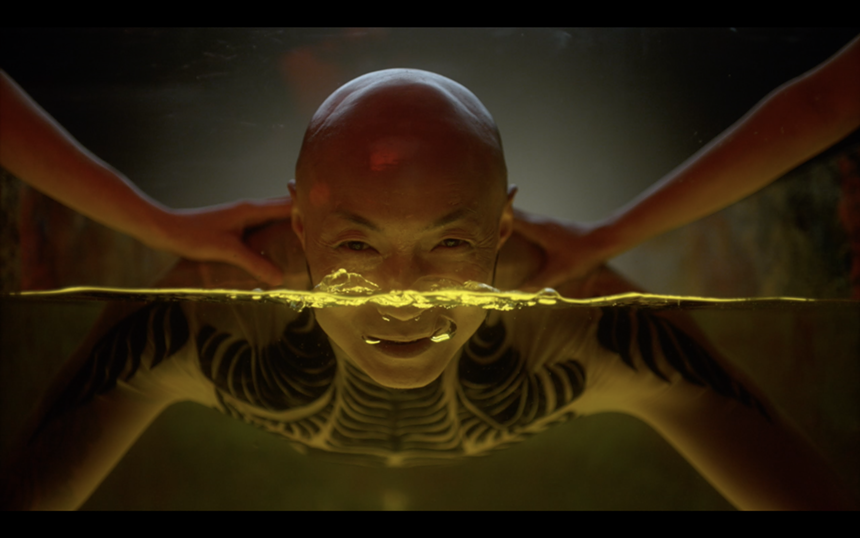 A capture of one of DJ Furth's NFTs.
Courtesy of Earth Force Climate Command
"We also have a very top-secret location where the NFTs will be shown. People will be given the location upon registration, and there will be a hike involved to see them at that location," she says. "It'll be dark, so [the NFTs] will be the only thing out in the woods in the dark — moving portraits."

She adds that "Clarity Fornell is weaving the Aspen Space Suits, and Nori Pao will be helping people to make their prophecies for 200 years in the future on clay tablets, and then we will fire them in a kiln and bury them in a secret location for 200 years!" Artist Chris Erikson has also made a concept-heavy work called "ASAP," which stands for "American Safety Armor Pods." 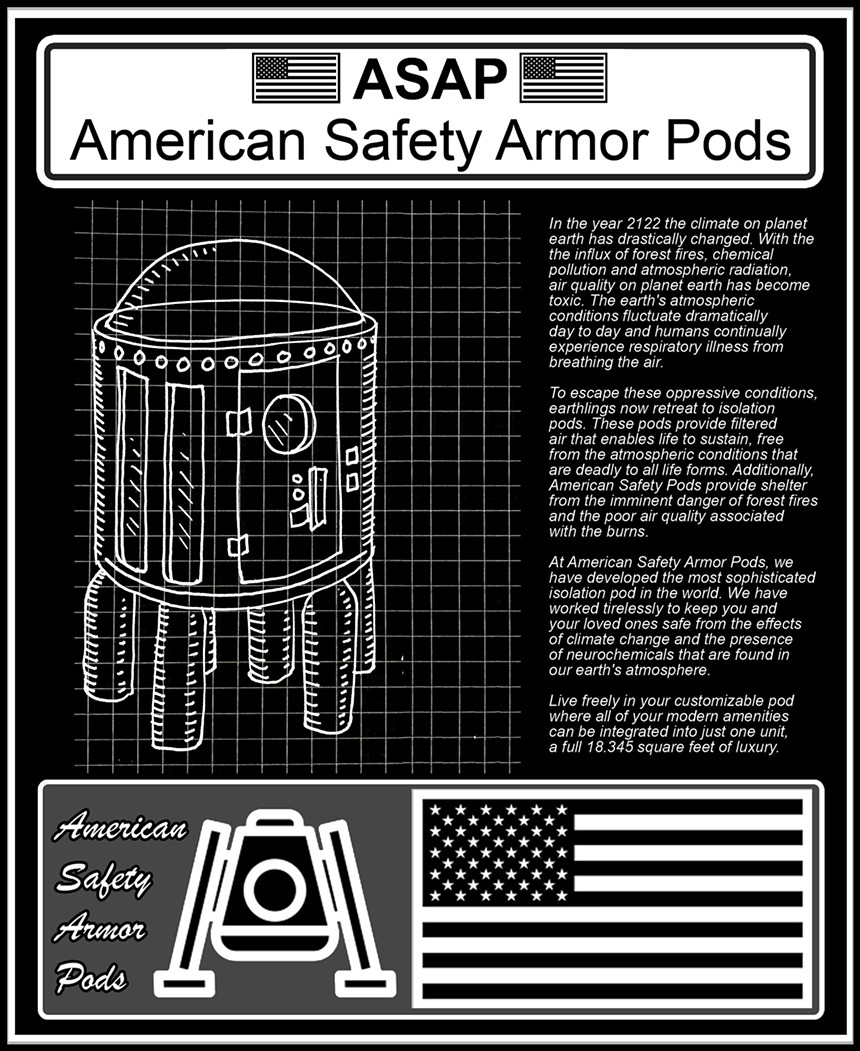 Chris Erikson's "ASAP" design.
Courtesy of Earth Force Climate Command
"It's this fire pod that he visualizes people 100 years from now having to have on their property to take shelter, and when there's a massive climate collapse event," Phillips explains.

Because EFCC is a nonprofit, artists will collect 100 percent of the proceeds if their art is sold.

Storytelling isn't just the basis for Wild Future Outpost: It's how space fantasizing, as Phillips calls it, has morphed into a widespread goal, once for nations and now for billionaires.This past year, Amazon founder Jeff Bezos and Space X founder Elon Musk have been engaged in what pop culture has dubbed the "space race." And Bezos, Phillips notes, was wearing a hat from Aspen-based Kemosabe when he took off in his infamously phallic rocket ship. "We've all been so indoctrinated into the space-fantasy narrative. I think the reason that Elon Musk and Jeff Bezos want to go to space is because they were also indoctrinated into the space-fantasy narrative. You know, we had Star Trek, Star Wars, Dune, all of these things constantly perpetuating this myth about the idea that we're going to go live someplace else besides Earth," she says.

"The two subconscious stories in our culture right now are: one, that Earth is doomed; and two, that our only hope is to escape to this other planet, and that we're going to go to Mars and start over there again," she continues. "And these two narratives, they're linked to each other. Not directly, but I think subconsciously; they're intertwined with each other. And they're super problematic, because neither of them are actually true. They're both just narratives that are being pushed. ... My question is just: How do we start to transform the narrative?"

One way was to create the tongue-in-cheek Billionaire Space Fantasy Recovery Program, which EFCC advertised in the local paper. "No one's answered to that yet," Phillips says, and laughs.

"What I'm hoping and trying to do here," she concludes, "is use something playful like a space station — which is absurd, and totally ridiculous — as a fun way to get people to start having a conversation about the future that's not based around fear."

Wild Future Outpost can be found throughout Aspen from Saturday, July 23, through September 11; find the full schedule here. For more information, visit TheFutureIsOnEarth.org.
KEEP WESTWORD FREE... Since we started Westword, it has been defined as the free, independent voice of Denver, and we'd like to keep it that way. With local media under siege, it's more important than ever for us to rally support behind funding our local journalism. You can help by participating in our "I Support" program, allowing us to keep offering readers access to our incisive coverage of local news, food and culture with no paywalls.
Make a one-time donation today for as little as $1.
Emily Ferguson is Westword's Culture Editor, covering Denver's flourishing arts and music scene. Before landing this position, she worked as an editor at local and national political publications and held some odd jobs suited to her odd personality, including selling grilled cheese sandwiches at music festivals and performing with fire. Emily also writes on the arts for the Wall Street Journal and is an oil painter in her free time.
Contact: Emily Ferguson