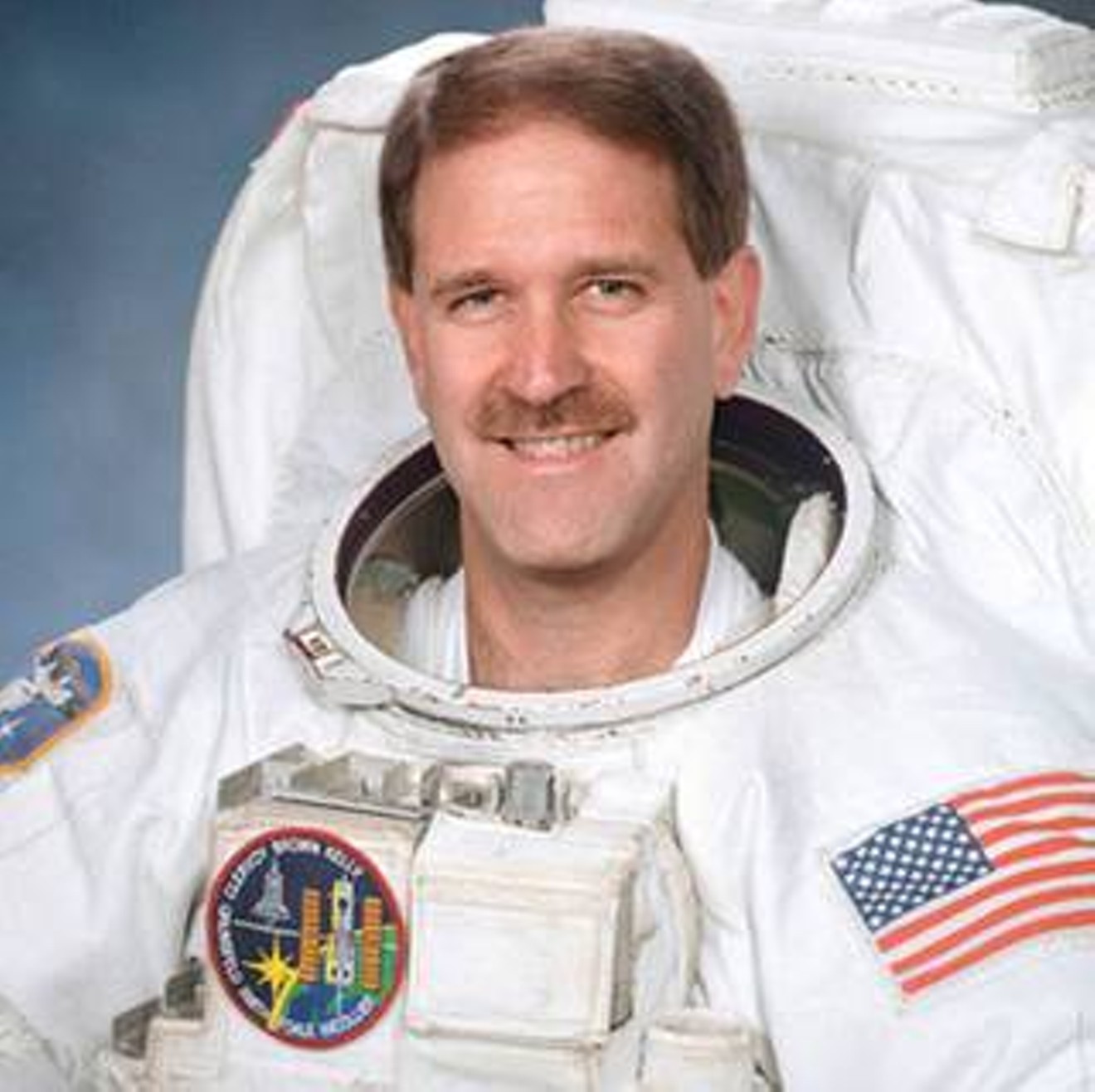 Former NASA chief scientist John Grunsfeld has spent sixty hours on space walks. NASA.gov
As a kid, John Grunsfeld carried a lunchbox celebrating the Gemini space program and was fascinated by Jacques Cousteau documentaries about exploring the ocean floor. So it’s not too surprising that he grew up to become not just an avid scuba diver, but a celebrated astronaut, best known for what NASA calls “extra-vehicular activities” — eight spacewalks in the course of five shuttle missions, including three missions to repair the Hubble telescope.

That’s a total of nearly sixty hours with nothing between him and the formless void but a puffy suit, a helmet and a flimsy tether. “It’s the most magical thing a person can do,” Grunsfeld says of his spacewalks. “It’s insane to do it, but we’ve made it look routine.”

Grunsfeld went on to become NASA’s chief scientist, its associate administrator — and, in many respects, the public face of the agency. He’s been a guest on The Colbert Report and once called Car Talk from the space shuttle to complain about the rough ride he was experiencing in his “government vehicle.” He retired from NASA in 2016. But on Sunday, October 13, he’ll be in Denver on another vital mission, as the featured speaker at a fundraising event to help combat a rare but devastating disease.

Proceeds from the event will go to the National Tay-Sachs and Allied Diseases Association. Tay-Sachs is a genetic disorder that leads to destruction of nerve cells in the brain and spinal cord, causing seizures and paralysis. Although a “late onset” form of the genetic mutation can be survivable, the condition is fatal in infants.

Grunsfeld first heard about Tay-Sachs through his friendship with a colleague, former NASA chief speechwriter Ed Goldstein. In 2012 Goldstein and his wife, Melanie Flamenbaum, learned that their newborn son, Russell, had been diagnosed with Prader-Willi Syndrome, a genetic condition associated with insatiable hunger and developmental disabilities. A few months later, the couple learned that he was also afflicted with Tay-Sachs, making him the only child in America with two distinct chromosome 15 disorders.

Russell outlived his doctors’ expectations, surviving to the age of three and a half. Grunsfeld says he was impressed by the parents’ deep commitment to his care. “What I remember is how they handled it,” he says. “They celebrated his short life, and I have enormous respect for them.”

“Melanie was so devoted to his care, it’s hard to describe,” says Goldstein. “As a parent, you know you just have to help him as best you can.”

A graduate of Denver’s East High and Colorado College, Goldstein is seeking to establish the Russell Elliot Goldstein Memorial Fund to aid Tay-Sachs research and provide support to families going through a similar experience. “A lot of families who have a Tay-Sachs child are far from medical help,” he says. “They need help with travel funds.”

Grunsfeld expects that his talk for the event will focus on hope, achievement and some insight into what those spacewalks were all about. “I was going to spend a little bit of time talking about why we explore space and where we might be going in the future,” he says.

Grunsfeld has spacewalked in the course of Hubble telescope repair operations three times.
NASA.gov
He points out that the Hubble has been orbiting the Earth for almost thirty years, and that half the people now on the planet have been born since it was launched. And the value of the data the telescope has provided about the universe is incalculable.

“If we don’t destroy the planet in the next fifty years, if in a thousand years we actually have a colony on Mars, then that first step by Neil Armstrong will be regarded as an incredibly significant event,” Grunsfeld observes. “But the Hubble is as transformative as Galileo’s first observations.”

Grunsfeld’s experiences also give him hope  that a cure might some day be found for Tay-Sachs. “It’s science fiction now, but maybe it’s not so far off,” he says.

The fundraising event starts at 6:30 p.m. on Sunday, October 13, with cocktails and hors d’oeuvres, at the Jewish Community Center, 350 South Dahlia Street, and includes a silent auction of Rockies and Olympics memorabilia as well as signed photographs by acclaimed photojournalist David Burnett. Tickets are $75 per person, $180 for families, $30 for college students and $50 for seniors, and can be purchased at the JCC website or at the door. For more information, email [email protected] or call 303-710-8454.
KEEP WESTWORD FREE... Since we started Westword, it has been defined as the free, independent voice of Denver, and we'd like to keep it that way. With local media under siege, it's more important than ever for us to rally support behind funding our local journalism. You can help by participating in our "I Support" program, allowing us to keep offering readers access to our incisive coverage of local news, food and culture with no paywalls.
Make a one-time donation today for as little as $1.