A New Documentary Follows a Cardboard Cutout of Cory Gardner 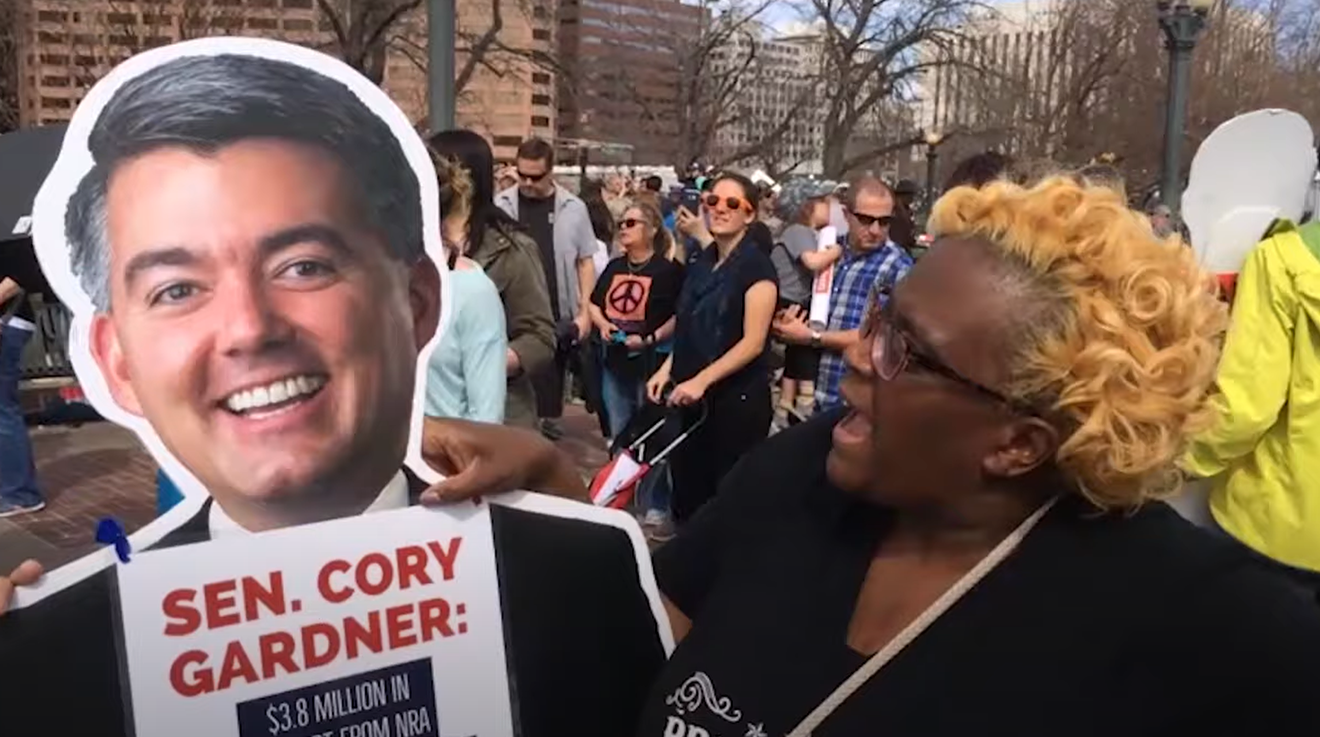 Cardboard Cory Gardner in action. Nick Rosen / Sender Films
Senator Cory Gardner is a terrible subject for a documentary shot in his home state. After all, he’s rarely here. And when he is, he isn’t exactly accessible.

Gardner is the forty-something boy next door from the Eastern Plains with the blinding, impish smile; hair-sprayed salt-and-pepper Bob's Big Boy 'do; and cheeks like buttered rolls that an old-fashioned grandma couldn’t help but pinch. If you’re lucky enough to spot him, he has the energy of an enthusiastic middle-school teacher. But that's when you can spot him: There are corpses who interact more with the people of Colorado than does the incumbent Republican senator.

So when Emmy Award-winning filmmaker Nick Rosen of Sender Films took a break from producing hit climbing films like Valley Uprising and The Dawn Wall to make a doc calling out Gardner for his failure to show up for his constituents, the Boulder-based director had a challenge: How do you make a movie about a pol who's almost never around? Rosen's answer: A cardboard cutout of the senator might be more captivating than the man himself.


Rosen, a progressive Democrat who has worked with Dreamers and helped launch the anti-Trump Colorado Resistance campaign, decided to follow Katie Farnan, a woman with the Indivisible Front Range Resistance. She and her fellow activists were dragging a cardboard cutout of a grinning Gardner all around the state, hosting town halls where suffering people detailed their struggles to the cutout politician.

“I was really struck by the energy and dedication of the Indivisible groups that started popping up in Colorado,” Rosen says. “These are not edgy radicals — just regular people from all walks of life who are so fed up with Trump and the lack of equality and justice in America that they have now devoted their lives to activism. It is not just something they do at election time. It is their passion, their community, their identity. And they are tackling it with fearlessness and wit and tireless energy. I wanted to celebrate that.

“And, of course, I was really pissed that our Republican senator, Cory Gardner, who had barely won his election in 2014 based on a lot of promises of bipartisanship and independent thinking, had become this shameless Trump enabler who refused to show up for his constituents,” the filmmaker adds. “So when I saw that Katie Farnan and her team had come up with this very powerful and slightly hilarious tool for holding the senator accountable, I figured they could use a filmmaker to help them spread the word and tell the story. So that is when producer Caroline Beaton and I started following them around with cameras.”

The scenes they captured show the pathos behind the pageantry. The film makes a compelling case that Gardner has neglected the people of this state, failing to answer his critics' emails, phone calls, letters and requests for meetings, all while becoming a Trump lackey.

“Gardner's cherubic grin and perfect hairline really lend themselves to satire,” says Rosen. “Someone on Twitter said, ‘Why does Gardner always look like a seven-year-old that someone just handed an ice cream cone?' But then that smile belies some pretty dishonest and devious behavior. And the cardboard cutout is a potent metaphor: fake, one-dimensional, a stand-in for an absentee senator.”

And what does Gardner have to say about this cardboard campaign against him?

“I didn't ask them for an interview,” Rosen admits. “People have been calling that office for four years with no traction on any issues, so I hardly expected they would respond about this. Anyway, it's not really about what Gardner thinks. It's about the activists.

“There was one time we were filming with Cardboard Cory at the Pueblo State Fair and Gardner was there, marching in the parade,” he adds. “So we brought the cutout over to try and get close to the senator. I asked Gardner what he thought of Cardboard Cory, and he said, 'Good-looking guy.' Then his security guys asked us to leave. That scene did not make the movie.”

No one knows whether Gardner has seen Cardboard Cory; the senator's office, characteristically, did not respond to Westword's emails and calls for comment. (You can see the movie on YouTube.) But then, that lack of accessibility is one of the movie's main points.

“I'm no expert, but it does not seem to be helping him,” Rosen argues. “Dodging the public is maybe a symptom of the real problem, which is that he votes with Trump, rubber-stamps his nominees, and refuses to criticize this basket case of an administration in any real way. Once he decided to board the Trump train, it was going to be too painful to face his constituents. But even then, I believe it is his responsibility to explain himself in public.”
KEEP WESTWORD FREE... Since we started Westword, it has been defined as the free, independent voice of Denver, and we'd like to keep it that way. With local media under siege, it's more important than ever for us to rally support behind funding our local journalism. You can help by participating in our "I Support" program, allowing us to keep offering readers access to our incisive coverage of local news, food and culture with no paywalls.
Make a one-time donation today for as little as $1.