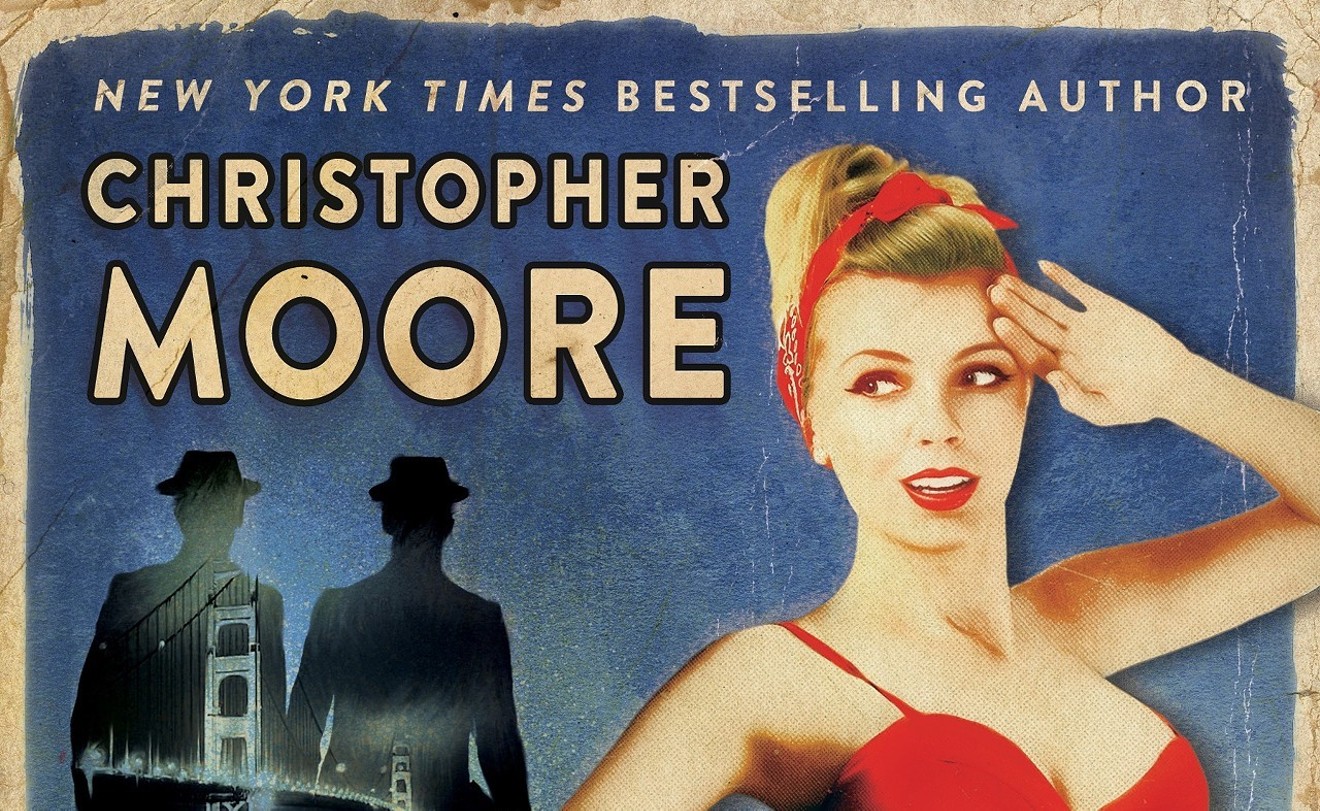 Noted comedic novelist Christopher Moore is bringing his unique brand of madness to the Tattered Cover on Saturday, April 21, at 2 p.m. Tickets for the line (which is a pretty humorous idea itself, if you think about it) are already on sale, and still available. For $33.03, you get a copy of the book, and a place in line where you can stand and wait your gosh-darn turn. But eventually, you’ll get the chance to shake the hand that wrote classics like Lamb and A Dirty Job.

And now comes Moore’s much-anticipated new novel Noir: a zany gumshoe book set on the mean (and sort of ludicrous) streets of post-World War II San Francisco. Along the way, our man Sammy meets a dame named Stilton (like the cheese), a tight-lipped Air Force general; a wisecracking waif; a black mamba named Petey; and lots of laugh-out-loud lines.

To help welcome Christopher Moore to the Mile-High City, Westword decided to ask him exactly 5.280 questions— that is, five normal questions, and just a little over a quarter of a real question, the other .720 comprising Denver hubris and semi-absurdism. Moore, for his part, was kind enough to oblige.

Westword: As a writer, you’ve been classified in several ways over the years. But how do you define your work? Is it comedy in story form? Is it story first, and funny is just the way it comes out? Have you purposely lit out for the literary territories, or are you just trying to make people laugh?

Christopher Moore: These days I tend to think of what I do as comedy, although it is most certainly in story form and specific to the novel. But starting out, I thought I wrote horror stories. I took some to a writer's conference and read them in workshops, and people laughed at the way I turned a phrase, so I just rolled with it and became the guy who writes funny horror stories. As time went on, I left horror behind a little, and the comedy has been up front and the only element consistent to all of my books. I want people to be entertained. If I have something to say about the human condition, I think they're going to be more receptive to it if I've made them laugh in their bathtub. (Or on the bus, or in bed — well, you know.)

You’ve tackled a lot of subjects with your past work: vampires, demons, Jesus Christ, etc. So why the noir genre? Why noir now? What drew you to that?

It's a genre I like more in concept than in reality, but I like the language of 1940s tough-guy stories, and that was the real draw. Also, Noir tends to be relentlessly dark, at least in the classics like James M. Cain and Jim Thompson, and I wanted to bring a sort of high silliness to the genre — characters that were not entirely comfortable with their world of fog and neon.

Do you think of soundtracks for your stories as you write them? Any songs that Noir specifically invokes for you?

I listened to a lot of jazz when I was writing Noir. Bird, Miles, Monk and Coltrane. Probably the song that stayed with me the most was Dave Brubeck's "Take Five." There's a sort of entrancing, "keep on keepin' on" groove to that song. I was in downtown San Francisco one foggy evening about 6 p.m. on a Sunday, and lower Market Street was nearly deserted. As I walked along, there was a guy across the street playing "Take Five" on a tenor sax, and it echoed off the buildings, and sort of filled all the cracks in the street — it was just perfect. I crossed six lanes to put five bucks in the sax player's case. There's a scene in Noir that was inspired by that moment.

Author Christopher Moore
Victoria Webb
What novels or movies did you review to prep yourself for the voice, for the style, for the era? Were any of them comedies? (And please tell me that Steve Martin’s vastly underrated Dead Men Don’t Wear Plaid was one of them.)

The brilliant Dead Men Don't Wear Plaid was definitely in the mix. I also like Shane Black's movies a lot. Kiss Kiss Bang Bang is a nearly perfect humorous noir, and The Nice Guys is great, too. I think the Lethal Weapon movies are also noir in a sense, and they run a nice balance between action and comedy. As for the style, a lot of it was drawn from the stories of Damon Runyon, who had a terrific way of having street mugs tell a story, past events told in present tense, that I've always liked. I reread a lot of Hammett, Chandler, David Goodis, Jim Thompson, and James M. Cain, too, but there's more Bugs Bunny in Noir than there is The Postman Always Rings Twice in Noir.

You’ve gone on record as saying that your books regularly get optioned for film, but that “none of them are in danger of being made into a movie.” If you could choose one — just one — to get the celluloid treatment, which would it be, and why? And who would you choose to play the lead?

Probably Fluke, my book about whale researchers working in Hawaii. I'd like to see the bizarre undersea world I created there. I'd like to see Ryan Reynolds play the lead, Nathan Quinn, a marine mammal biologist. Reynolds is a very talented comic actor, and I've been thinking he'd be great in my stuff since I saw him in Two Guys, a Girl, and a Pizza Place back during the Civil War.

Noir is set in late 1940s San Francisco. If you were to make up a ChristopherMoore book concept for some era of Colorado right here, right now, what (and when, and where) might it be?

Everything I know about Colorado history I learned from James Michener's Centennial, so that said, I think the mountain-man era of the 1800s. I'm not sure how I'd make it funny, but I don't always know that when I start any book, so I guess I'd figure it out. I also think that early period of contact and conflict with the Native American people of Colorado would be interesting to play with. I was a cultural anthropology major, and I've always enjoyed finding the humor in contrasting cultures.