Clark Richert, a true master. Courtesy of Rule Gallery
Clark Richert, a contemporary master of Colorado art, died on Christmas Eve morning at the age of eighty. Richert was widely acknowledged as the premier painter and conceptualist of his generation by his artist peers; he was also highly regarded by his legion of students, mentees and other followers. For more than fifty years, his complex, mathematically based pattern paintings and digital prints have been celebrated by galleries, notably Rule Gallery; in the 21st century, his works have been increasingly valued by museums.

Richert was born in 1941 and raised in Wichita, Kansas; he attended the University of Kansas in Lawrence, where he earned a BFA in 1963. Early on, he was influenced by Mark Rothko, and initially he created abstract expressionist-style paintings that reflected Richert’s sophisticated sense for color.

After graduation, he came to Colorado to study at the University of Colorado with George Woodman, who was then creating paintings based on patterns inspired by Islamic tile work. Richert had seen Woodman’s pieces before he moved to Boulder and was deeply affected by them. During this time, he was the principal force behind the formation of the Armory Group, a loosely affiliated collective of artists showcasing a range of stylistic expressions, from the realist to the non-objective; it included the likes of Margaret Neumann, John DeAndrea, Richard Kallweit and others. "120 Elements" (detail), Clark Richert, 1980s.
Courtesy of Rule Gallery
Richert left the MFA program in 1965 to help found Drop City with Kallweit, Gene Bernofsky and JoAnn Bernofsky. Drop City was an artist commune and collective — Richert bristled at the idea that it was a hippie commune, a common misconception — that was located in Southern Colorado near Trinidad. Another misconception: that the name Drop City referred to dropping acid or dropping out. It actually was inspired by a performance piece in which Richert and other “droppers” dropped things off the roofs of buildings.

Drop City comprised a collection of domed and semi-domed buildings that expanded on the radical structural concepts of Buckminster Fuller, whom Richert had met in Boulder. Unlike most artists then or now, Richert was involved in the practice of advanced mathematics and geometry, and with the revelations unleashed by Fuller, Richert’s trajectory flowed perfectly into the construction of these “domes.” Their surfaces were covered with geometric patterns of hard-edged shapes. These multicolored shapes had been cut out of the hoods of junked cars and then used as building materials. The resulting forms represented three-dimensional expressions of Richert’s simultaneous painterly interests — covering a surface with repeated shapes tessellated into clusters.

Though short-lived, the art collective earned much fame and many accolades; Fuller, pleased with what he saw when he visited the site, chose Drop City for his 1967 Dymaxion award in the field of “innovative and economic housing construction.” This involvement with experimental living made Richert's reputation as an early pioneer of the counterculture — not just here, but nationally.

Drop City was abandoned by its residents in 1969, and Richert returned to Boulder, eventually completing his MFA in 1972. In 1974, he participated in another kind of artist collective, Criss-Cross. Its membership included others interested in using repeated forms as building blocks for their compositions, including Woodman, longtime fellow traveler Kallweit, and Charles DeJulio. It was during the Criss-Cross years that Richert’s aesthetic became well established, creating what could be called his classic style. In the pieces from this period, Richert was using systems of color to lay out complex patterns that were illustrations of concepts he had taken from physics and mathematics. Despite their sometimes indecipherable content, the resulting paintings were so abjectly beautiful and so expertly carried out that they had a broad appeal extending far beyond those who could understand the mind-boggling equations underneath the surfaces.

In the late ’70s, Richert was involved in the founding of two of the region’s earliest artist-co-ops: Edge Gallery in Boulder (no relation to Denver's current Edge Gallery) and Spark Gallery in Denver, on which he collaborated with Paul Gillis, Andy Libertone, Neumann and DeJulio, among others. Spark is still up and running in its original form. "Periodic Pyramid," Clark Richert, 2001.
Courtesy of Rule Gallery
In the later 1980s and into the ’90s, Richert, having relocated to Denver, used his patterning to create the illusion of three-dimensional pictorial space, even including representational elements such as the landscape or the figure. In the late ’90s and into the 21st century, he returned to his earlier Criss-Cross pursuits, but took a looser and more airy approach to the compositions and execution. He also became increasingly engaged with digital technology and worked in films, animations, performances and sculptures, among other media.

In addition to working as an artist, Richert was a beloved teacher. He taught at several art schools over the decades; starting in the ’90s, he served as professor of art at the Rocky Mountain College of Art and Design, impacting the lives of hundreds of students, some of whom later emerged as major artists themselves. A few years ago, he cut back on teaching and was named professor emeritus at RMCAD. "R P Motion," Clark Richert, 2003.
Courtesy of Rule Gallery
All along, Richert exhibited his work at galleries and museums. The most important exhibits of his career came in 2019: two major museum solos at the same time. One, which was curated by Cortney Lane Stell and drilled down on the various themes Richert had explored, was mounted at the Boulder Museum of Contemporary Art. The other, a proper career retrospective curated by Zoe Larkins, was mounted at the Museum of Contemporary Art Denver.

Richert remained active in the art world up to the end; in fact, he's the subject of a solo, Clark Richert: Z-Space, currently on view at Rule Gallery’s branch in Marfa, Texas. Plans for a posthumous Richert show at Rule’s Denver venue are in the planning stages.

Richert’s health began to falter in August, and he was in and out of hospitals and health-care facilities though the fall and winter before passing away on the morning of December 24. He is survived by his longtime partner, Barbara Ittner, with whom he'd lived since 1984, and his children from a previous marriage: Hannah Richert, Luther Richert and Brandon Richert. Given the pandemic, there is no memorial planned for the immediate future; a celebration of Richert’s life could be held next spring or summer. 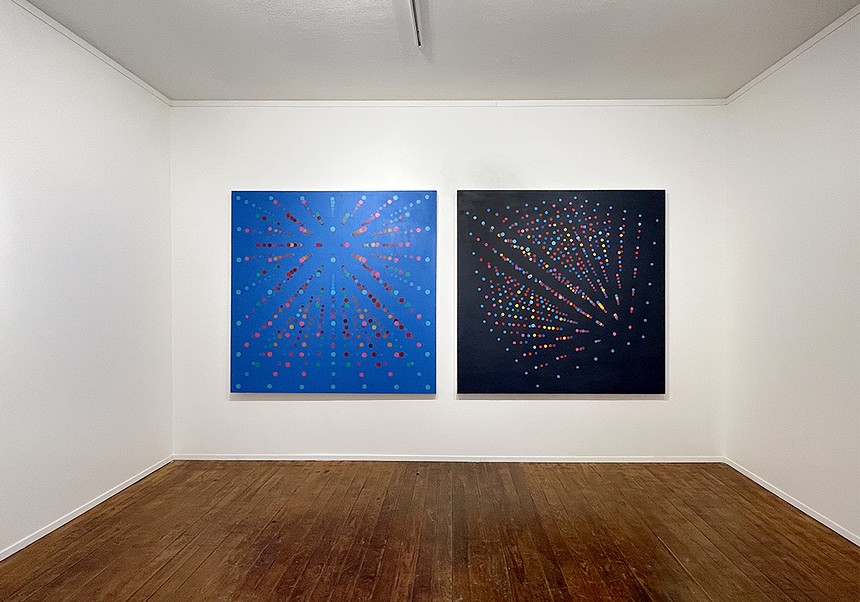 Installation view of Clark Richert: Z-Space, currently at Rule Gallery, Marfa.
Courtesy of Rule Gallery
In the meantime, Richert's work lives on in many private, public, university, corporate and museum collections across the country, including the Kirkland Museum of Fine & Decorative Art and the Denver Art Museum. Richert was an artist's artist, an influential teacher, and a giant in the creative life of our community. He will be missed.
KEEP WESTWORD FREE... Since we started Westword, it has been defined as the free, independent voice of Denver, and we'd like to keep it that way. With local media under siege, it's more important than ever for us to rally support behind funding our local journalism. You can help by participating in our "I Support" program, allowing us to keep offering readers access to our incisive coverage of local news, food and culture with no paywalls.
Make a one-time donation today for as little as $1.