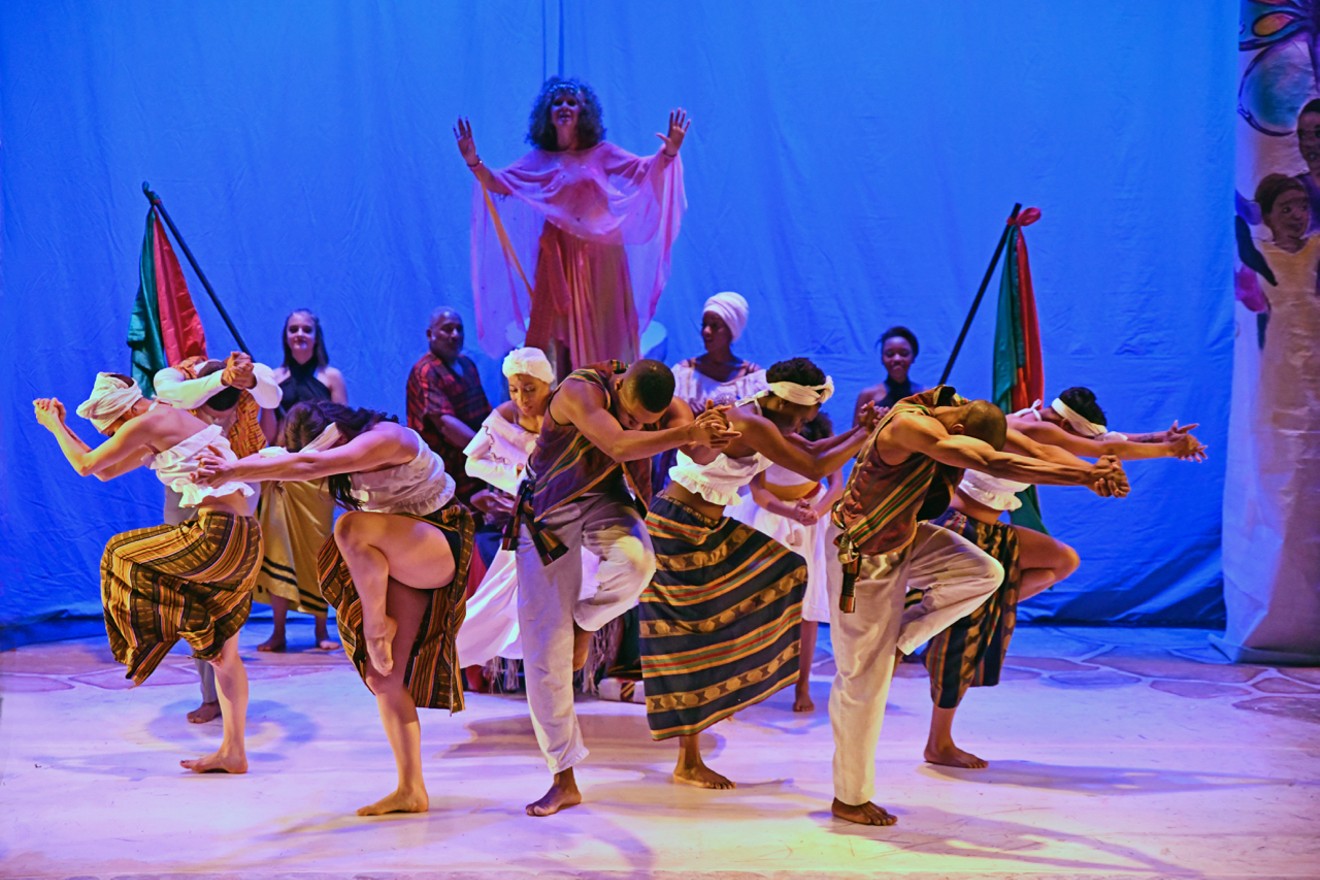 Granny Dances to a Holiday Drum Stan Obert
Christmas lovers hijack our culture each December, as The Nutcracker and A Christmas Carol take over the stages; galleries and markets turn into holiday shopping bazaars; and concerts and radio stations blast Christmas music over their speakers. While vapid commercialism and the Santa Claus myth have largely drowned out the story of little baby Jesus, escaping Christian propaganda is also difficult: Just look at Denver’s City and County Building, with its gaudy lights and tacky manger scene, for proof.

It’s in this climate that for 26 years Cleo Parker Robinson Dance has been pushing a Denver holiday tradition of its own, one that aspires to be multicultural, upbeat and even utopian: Granny Dances to a Holiday Drum.

Being inclusive of non-Christians at Christmastime is a perilous task. Anyone who’s seen the atrocious Frozen-offshoot cartoon playing before Coco knows it (mercifully, Disney pulled it this week). Pretty much everybody who doesn’t believe in Christianity or Kris Kringle is thrown a bone with a mention of Hanukkah or Kwanzaa; in exchange, non-Christians are forced to endure the tyranny of mistletoe and mangers under the premise that everyone’s honored at this time of year.

But no matter how many Merry Christmas greeting cards are traded out for Happy Holidays missives, the whole thing comes off as pandering. The reason for the season is clear. Granny Dances to a Holiday Drum
Stan Obert
Robinson's musical-dance review Granny Dances to a Holiday Drum doesn’t pander; it doesn’t fake interest in multicultural traditions. Those traditions are what the show's all about. And while Robinson herself acknowledges that each year people from some of the cultures that her largely African-American dance company represents point out things she did right — and things she missed the mark on (particularly Hebrew and Spanish pronunciations) — it’s the most respectful embrace of multiple cultures I’ve ever seen, and one holiday performance I wasn’t mortified to take my four-year-old, impressionable Jewish kid to. In fact, we broke out the Hanukkah decorations a little early because of the show, and I left feeling honored as someone whose cultural traditions have spanned Jewish, Celtic and Christian holidays — all of which were represented respectfully and with rigor.

The show is set in a utopian world, a place of pure peace. Just that concept felt radical in this age, when the only thing people in the United States seem to agree on is that we’re living in a divided country. The premise is that an older granny, who has danced around the world, is losing her memory and her recollection of the various cultural traditions she encountered. Two children help her use dance to resurrect those memories and tell the stories of various global holidays, from the Chinese New Year to indigenous cultures' ways of marking the winter solstice.

The songs and speeches of the performers take a stab at explaining each culture’s holiday story in depth, one dance at a time. For many of the African-American dancers in the troupe, it was the first time they learned the principles of Kwanzaa, a holiday of African-American self-determination and community building, Robinson says. For Jews who mistook Hanukkah for a celebration of candles, dreidels and gelt, the performers get into the ins and outs of the story of the Maccabees and their militant defense of the Temple and the importance of specific cultural expression, a notion too often burned away in the great American melting pot, where immigrant assimilation is nearly mandated. The dancers point out that the lesson of cultural pride and expression from Hanukkah is a universal value all people can embrace: that it’s important to own who we are, what we believe, and our own distinct practices.

Opening night was far from perfect, particularly with an out-of-control sound system that interrupted the music and amplified the heavy breathing of dancers wearing mics. Some dialogue was stilted; some dancers — particularly the adorable kids — were a bit lost. The script’s take on hip-hop, that it’s a new art form a granny might not know about, is musty in an era when that genre has become a legacy art form pioneered by some now-grannies and transformed over decades, which isn’t reflected in the cutesy, late-’80s stylization Cleo Parker Robinson Dance performs. Granny Dances to a Holiday Drum
Stan Obert
Most of the dancing, which mixes genres wildly, is compelling, however; the music is catchy and the series of multicultural stories moving. Granny Dances to a Holiday Drum is an exercise in dance as a universal act of love. The production models how people can honor cultures that are not their own through art, but without appropriating them: That's pure joy, and so rare.

Robinson says it was tempting to tackle Donald Trump’s administration in this year’s performance, but ultimately she decided the play would be more relevant if it maintained its positivity and steered clear of jabbing at the Republican takeover of the country and the rise of white supremacy. While it’s tempting to raise an eyebrow at “positivity,” in this case, she made the right call.

Experiencing her fictional world unpolluted by hate and spending a couple of hours enjoying song, dance and love was refreshing. It put at least one perennial grinch in the holiday mood. And it offered a tradition well worth embracing each year.