Colorado Book Award Winners on the Best Places to Write

Maybe you've been outlining the next Great American Novel, cranking out beginning-of-school essays or revising the line breaks of a poem for the hundredth time. The winners of the Colorado Book Awards have likely been there, done that, and now they're sharing their favorite writing nooks around the state. Eight of the 2017 awardees submitted favorite spots, listed below, and five of the authors – Mario Acevedo, Tershia d'Elgin, Wayne Miller, Barbara Nickless and Carter Wilson – will be reading at Mermaid Fine Books, 4220 Tennyson Street, at 7 p.m. on September 1, as part of the Second Annual Lit Crawl on Tennyson Street. Here are the writing haunts recommended by some of our state's best wordsmiths.

Stanley Hotel
Carter Wilson
Revelation: A Thriller
"I have a tradition of going up to the Stanley Hotel in Estes Park every year in the dead of winter and renting one of their haunted rooms for a weekend. I write in the evenings in the restaurant and then do a little ghost hunting on the infamous fourth floor after midnight. I love the spooky vibe there (I’m a thriller novelist), especially in the winter, when it’s mostly empty. Last year, I completed my manuscript for my upcoming Mister Tender's Girl during my Stanley visit."

The Staircase
Jessica Lawson
Waiting for Augusta "With my elementary-school-aged kids at home all day during the summer, I sometimes have to balance mischief-monitoring with the need to meet writing deadlines. By writing on the staircase, I'm able to keep audio tabs on both first-floor and second-floor kiddo shenanigans." 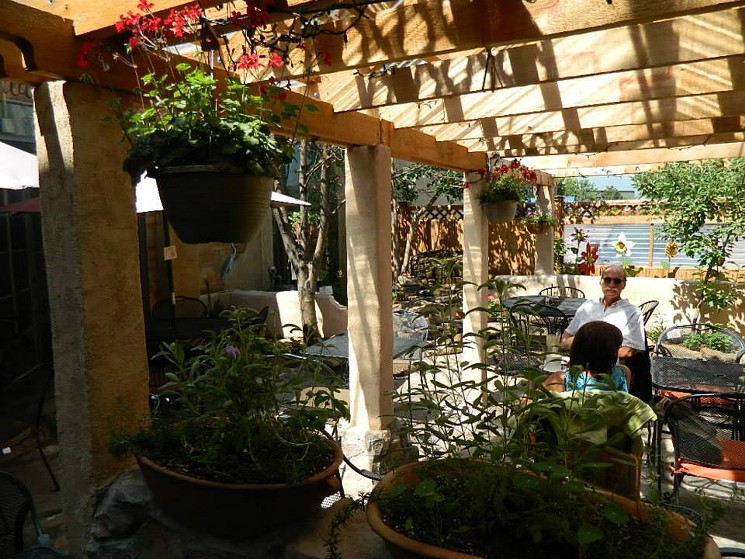 The patio of Poor Richard's, a Colorado Springs staple.
Poor Richard's Facebook page
Poor Richard's/Rico's Cafe
Ashlee Cowles
Beneath Wandering Stars
"I wrote part of Beneath Wandering Stars at Poor Richard's/Rico's Cafe in downtown Colorado Springs. My critique group also used to meet there at that time. I write from home more now that I have a newborn, but it's still one of my favorite spots in town — an eclectic cafe, restaurant and independent bookstore with awesome pizza, chai lattes and craft beer/wine! It's been here for about thirty years, I believe."

Wild Spaces Writing Shed
Diane Les Becquets
Breaking Wild: A Novel
"My favorite place to write is in an 8x8 shed, on a plywood desk, with a window that looks out over the mountains. I love the wildlife, the quiet of the woods, the feeling of being removed, and the beautiful sunsets. The shed is called Wild Spaces. Sometimes I can get lost in that little space. One night I continued to write through a snowstorm and well into the wee morning hours, only to find I'd been locked out of the house. I waded through snow almost up to my hips, with my dog in tow, until I could wake my husband by banging on a window. My writing shed truly is a magical place."

A downtown Denver hotel lobby (the Born Hotel) like one where you might find Mario Acevedo at work.
Linnea Covington
The Lobbies of the Monaco and the Hyatt
Mario Acevedo
editor of Found: Short Stories by Rocky Mountain Fiction Writers "I do most of my writing at home, but when I have a project that demands a lot of prolonged heavy lifting, such as editing and revising a novel, I like to crash in a hotel lobby. They’re underrated places to hang out, which is unfortunate considering all the money hotels spend to make them attractive and comfortable. Sometimes there’s free coffee. My favorite lobbies are in the Monaco and the Hyatt. Avoid hotels along the 16th Street Mall, because the bathrooms are locked to keep the bums out."

Big Bend Station on the South Platte
Tershia d'Elgin
The Man Who Thought He Owned Water: On the Brink With American Farms, Cities, and Food
"Big Bend Station, erstwhile a stagecoach relay, marks the spot where the South Platte makes its exertion to the east. Inside bending sentences, I lasso the follies and successes witnessed there." 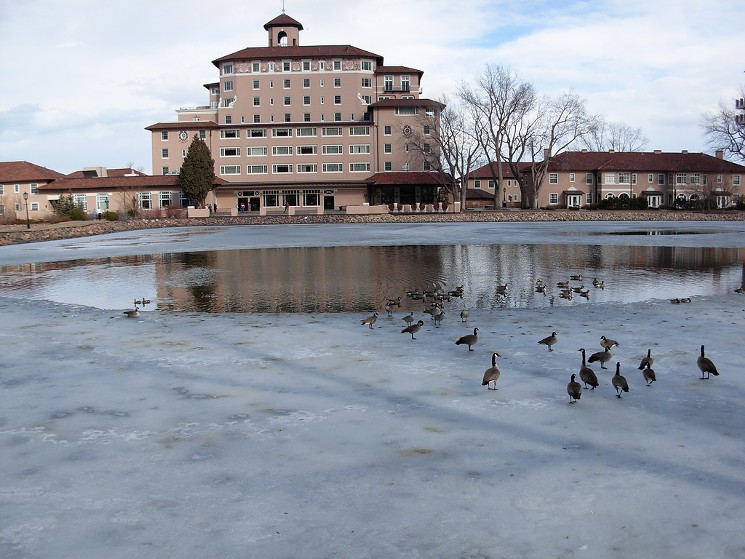 The five-star Broadmoor Hotel in Colorado Springs houses the plush Hotel Bar.
Mack Lundy, under a Creative Commons license.
The Hotel Bar at the Broadmoor
Barbara Nickless
Blood on the Tracks
"I can’t afford to stay at the Broadmoor. Or golf there. Or indulge in a spa day. But an afternoon in their cozy, atmospheric bar with a laptop, a deadline and a chilled glass of sauvignon blanc is about as perfect as the writer’s life gets (okay, minus the deadline). When rain lashes the glass during a fierce squall, I eavesdrop on the polyglot patrons and imagine a tavern where spies meet to trade secrets and hash out deals. Where a discussion of golf scores could actually be about nuclear codes. When I’m deep into plotting my thriller, I find myself sitting with my back to the wall, watching everyone. It’s the perfect place for an agent provocateur. Or a crime novelist."

Driving Home
Wayne Miller
Post-: Poems
I'm mostly a write-at-home sort of guy, but I sometimes find myself writing notes/lines against the steering wheel of my car driving home from work (with my son in the back singing along to Moana) — mostly somewhere on Welton between Colfax and about 25nd Street. I don't know why that's the sweet spot, but it seems to be.

Starting at 6 p.m. Friday, September 1, fiction, nonfiction and poetry buffs can attend readings by the writers of Mile-High MFA, Tethered by Letters, At the Inkwell, Colorado Humanities' Colorado Book Awards, Lighthouse Writers Workshop and the F-Bomb along Tennyson Street (more details here). The night ends with a raffle and drinks at BookBar.