Review: Month of Photography Has Developed Into a Major Event

Woven movie stills by Heather Oelklaus in Elemental Construction at the McNichols Building. Robert Delaney
The Month of Photography, a biennial celebration, was established in 2004 by Mark Sink, a well-known local photographer and advocate for the place of photography in contemporary art. Since that time, it’s ballooned into one of the highlights of Denver’s exhibition scene, if for the pure volume of offerings alone. But the multi-venue event’s title is misleading. First, the various Month of Photography shows and lectures sprawl over three months, not one. Second, the focus of many of these exhibits is not, technically speaking, photography, but stretches into such widely separated pursuits as installation and video. Not only that, but as often as not, the participating artists employ found photographic images instead of ones they have actually lensed.

One of the first MoP shows to open is Elemental Construction, which takes up the topic of collage, a medium that skirts the edges of what is traditionally thought of as photography. The large exhibit, installed on the second floor of the McNichols Building, was curated by Samantha Johnston, the director of the Colorado Photographic Arts Center. (CPAC is presenting its own MoP show, Inspiration/Expression, which was also curated by Johnston.)

Inkjets of atomized portraits by George P. Perez in Elemental Construction.
Robert Delaney
For Elemental Construction, Johnston selected ten artists, half of them from Colorado and the rest from across the country, most of whom she encountered when doing portfolio reviews as part of her CPAC duties. “A lot is happening with collage right now, specifically in photography,” notes Johnston, “with photographers using analog and digital techniques, sometimes both at the same time.” Wanting to reflect this burgeoning interest, she assembled a range of approaches to collage, from actual pasted-up compositions to digital prints. Some of the latter are based on photos of actual collages, while others have been done entirely on a monitor, without any physical cutting or pasting involved, technically making them montages.

Among the standouts are panels by Mario Zoots; he’s made his name with collage, but here the works are prints of collages he did that have been blown up, printed onto photo vinyl, and digitally cut so that the margins follow the contours of the compositions. Zoots juggles irregularly shaped blocks of colors with photos of people and things. Juxtaposition of disparate images is a key aspect of collage, and a couple of other artists put a twist on it by making the transitions smooth, as George P. Perez does in his digital prints of cut-up and incorrectly reassembled portraits. Though the subjects are recognizable as people, Perez has atomized them so that they are pointedly out of focus. Heather Oelklaus is among the few artists doing physical collage, although it's based on found digital images. She creates complex compositions by weaving sliced-up movie stills, using sequential images so that her source materials are both similar and different, and the results are hallucinogenic.

Other standouts include the antique-looking assembled photos by Susan Goldstein, in which she’s put together unlikely combinations of old images. Theresa Ganz offers patterned views of palace ceilings from the annals of art history; she achieved a collideoscopic effect by exploiting a glitch in Google’s Museum Tool search. Turning the addition aspect of collaging on its head, Odette England removes elements, putting voids in old family snapshots. 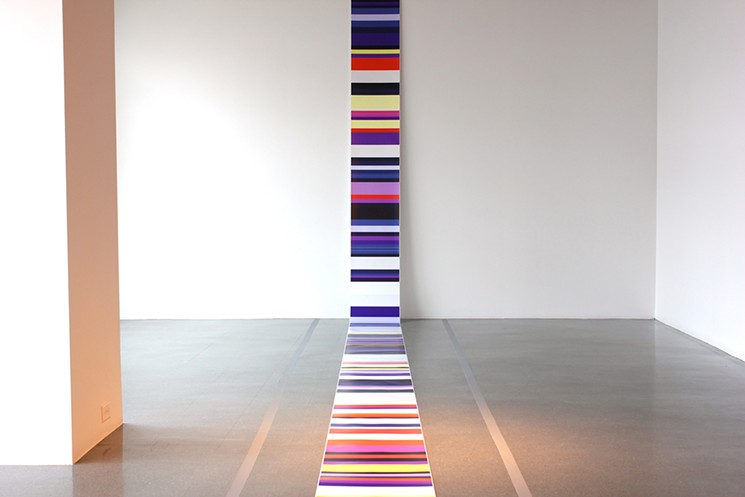 Digital print installation by Krista Wortendyke in Gravity of Perception.
Heather Link-Bergman, courtesy Center for Visual Art
Another early MoP show that goes beyond traditional photography is Gravity of Perception, at the MSUD Center for Visual Art, which looks at conceptual topics via photographic, or at least photo-based, works. The show was put together by a trio of curators: Cecily Cullen, director of the CVA; Hamidah Glasgow, director of the Center for Fine Art Photography; and artist and teacher Natascha Seideneck. Its dominant motif, announced right at the start by the reproductions of photos of Frederick Douglass, is the African-American experience, which five of the artists address, while two don’t. Thus the armature that the three curators use to hold the show together is pretty flexible, and though it’s hard to see a single direct through-line, according to Cullen, “Everything in the show involves an archive or the creation of an archive.” And that, too, is indicated by the Douglass section: during his lifetime, he became the most photographed person of the nineteenth century, creating his own archive.

Dignifying the perception of African-Americans through heroic depictions, as Douglass advocated, is the set of tarot-based montages in poster form by Tya Anthony. The artist recontextualizes the Depression-era Farm Security Administration photos of black tenant farmers in the South, placing them in ceremonial poses surrounded by colorful foliage as they stand in for the face cards.

Photos from the "Bleak Reality" series by Kris Graves in Gravity of Perception.
Heather Link-Bergman, courtesy Center for Visual Art
There’s a lot of strong work in this show. In the window gallery is a piece by Krista Wortendyke that looks like a minimalist installation of a long sheet of paper covered in colored bars that runs down from the wall and across the floor. The colors of the bars are beautiful, but what they represent is not: They correspond to the time of day of shootings in Chicago, with the yellow bars standing in for daytime, the blues for night. The range of blues dominates the piece.

Kris Graves also looks at violence in the "Bleak Reality" series, in this case the notorious police killings of unarmed black men, including Eric Garner, Tamir Rice, Walter Scott and others, that together sparked the Black Lives Matter movement. Traveling around the country, Graves revisited the sites of these killings, taking poetic photos of the places where they happened at precisely the same time of day. As aesthetic objects, the photos are breathtaking, with a deep focus like a Douglas Sirk movie still, which somehow enhances their poignancy.

Lorenzo Triburgo's "Policing Gender" photo series in Gravity of Perception..
Heather Link-Bergman, courtesy Center for Visual Art
Lorenzo Triburgo takes on another serious subject via beautiful objects in "Policing Gender." A trans man, Triburgo became interested in LGBTQ prisoners, and recorded their voices. He didn’t photograph them, believing that making them identifiable would endanger them, so instead he took luscious color photos of luxurious draperies that stand in for the missing prisoners. Triburgo also offers aerial photos of prison grounds that leave the prisons out of the picture, just showing the surrounding woods. Sexual orientation and gender identity are also addressed in the video projection by Marcella Ernest, in which the story of a young Navajo child, Jolene Nenibah Yazzie (now a student at Metro), is heard in voice-over talking about being female and yet dressing as a boy in order to join the dancers in Santa Fe. Ernest uses photos of Yazzie from her childhood interspersed with halftones and non-objective scribbles. The work is longish, but still engaging.

Dozens of MoP shows will be opening over the next few weeks, but these thoughtful group exhibits have already expanded the very idea of a photograph.

Gravity of Perception, though March 23, MSUD Center for Visual Art, 965 Santa Fe Drive, 303-294-5207, msudenver.edu/cva.
KEEP WESTWORD FREE... Since we started Westword, it has been defined as the free, independent voice of Denver, and we'd like to keep it that way. With local media under siege, it's more important than ever for us to rally support behind funding our local journalism. You can help by participating in our "I Support" program, allowing us to keep offering readers access to our incisive coverage of local news, food and culture with no paywalls.
Make a one-time donation today for as little as $1.