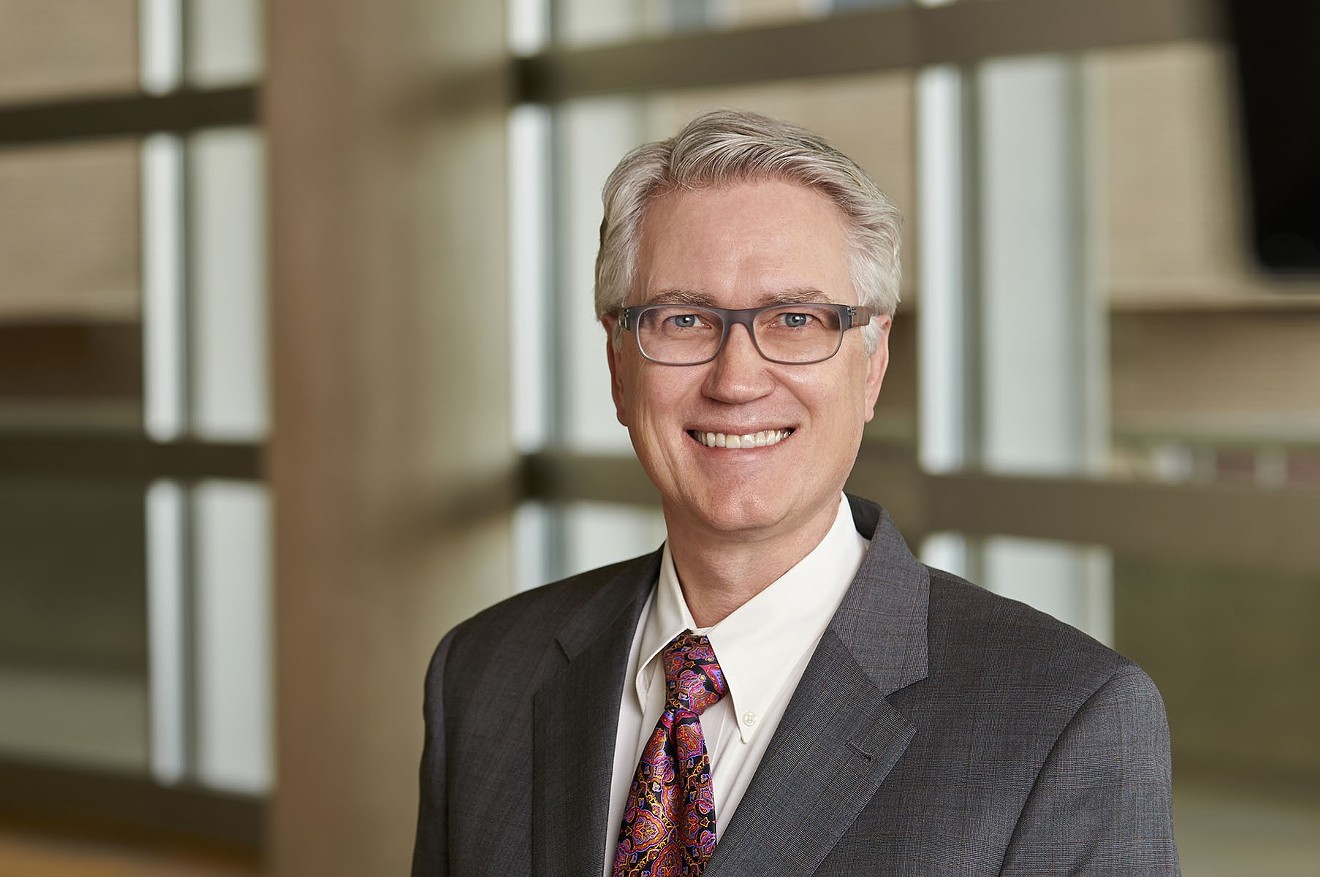 Kent Thompson, the departing producing artistic director of the Denver Center for the Performing Arts Theatre Company, was actually forced out of the position by DCPA CEO Janice Sinden, according to trustee Jim Steinberg, who resigned over the ouster. DCPA
Update: Rumors have swirled since Kent Thompson announced he was leaving the Denver Center for the Performing Arts, and on February 3 we reported that former DCPA trustee Jim Steinberg had serious concerns about that announcement. On February 7, the DCPA Board of Trustees released the following statement in response to our original story (read it in its entirety below):

In response to inaccurate statements printed in Westword made by former Trustee Jim Steinberg, the Denver Center for the Performing Arts’ Board of Trustees affirms that CEO Janice Sinden reviewed with each Trustee the resignation of Producing Artistic Director Kent Thompson, which he announced on January 6, 2017. Furthermore, the Board fully supports all decisions connected with Mr. Thompson’s resignation made by CEO Sinden. Mr. Thompson’s contributions to the DCPA have been invaluable — including his current production of The Christians and the upcoming Colorado New Play Summit. We appreciate his willingness to continue to serve in an advisory capacity through September as he consults on our transition plan. We wish him every success in the future.


On February 11, Jim Steinberg sent this response to the DCPA board's statement:

The CEO of the DCPA did inform Trustees of Kent Thompson’s non-renewal and pending “resignation" only AFTER the decision to let him go had been made and Mr. Thompson was informed of the decision. At no time prior to Mr. Thompson being informed that his contract was not being renewed was the board ever consulted regarding this decision.


Original story published on February 3: The Denver Center for the Performing Arts' announcement that Kent Thompson, producing artistic director for the Theatre Company, would be leaving after March 3 was met by surprise, confusion and a lot of speculation in local arts communities, particularly because the announcement came in the middle of the theater season. Thompson has guided the company for twelve years, mounting many popular and critically praised productions, with particular focus on work by women and writers of color. He created the Women’s Voices Fund, which commissions and produces new plays by women, and set up a nationally acclaimed annual New Play Summit to workshop, showcase and produce original works.

Thompson, who signed a letter of resignation, did not respond to requests for comment. He is quoted in the official press release as saying, “After twelve seasons, I believe it’s now time to move on to other opportunities in professional theatre.... I wish the DCPA, the Theatre Company and the entire theatre community of Colorado much success in the future.”

But Westword recently received a copy of a resignation letter from longtime center trustee Jim Steinberg of the Harold and Mimi Steinberg Charitable Trust, and Steinberg has vouched for the letter's authenticity. It indicates that Thompson is not leaving voluntarily.

“I am disappointed at the non-retention of the Producing Artistic Director,” Steinberg wrote. “Having invested more than $2,000,000 in the Denver Center for the Performing Arts during my board tenure, I would have at least expected the courtesy of a phone call for an in-depth discussion regarding the change of the Artistic Director. But now, more than three weeks after our Artistic Director's dismissal I have not had any conversations with either the Chair or the CEO.”

The chair is Daniel Ritchie, who retires from the position in March; Janice Sinden was named the center’s president and CEO in August 2016, after a five-year stint as Mayor Michael Hancock's chief of staff.

Steinberg, who served on the DCPA board for almost seventeen years, went further. On Monday, he released an official statement detailing the sequence of events surrounding Thompson’s leaving, information he said he acquired through a phone call with Sinden:

“On the morning of Monday, 19th December, at the beginning of Christmas week, Kent Thompson ... met with Janice Sinden. ... At that meeting Ms. Sinden told Mr. Thompson that she would not renew his contract that was set to expire on 30th June, 2017, and that he would have two days to accept the proposed terms of separation. The remainder of the year would then be spent finalizing ‘the messaging.’ The Board of Trustees was neither consulted with nor advised of this action prior to it being taken and was not given a reason for the action afterwards. At no time between her hiring and the above action being taken was a formal job evaluation of Mr. Thompson ever done. Mr Thompson was given the option of leaving immediately, Ms. Sinden’s preference, or directing a final show, The Christians, which was scheduled to begin rehearsals the following week. He chose to stay and direct the piece (The Christians opened last week) and was then given until the end of the run, 3rd March, before having to vacate his office and the premises.”

“That information was not accurate,” Sinden responded in an interview. “I think it’s unfortunate that it made it outside to the community. Kent resigned and put out a public statement. We honor Kent: He’s wonderful and has made wonderful contributions to this organization.”

Steinberg administers the Harold and Mimi Steinberg Charitable Trust, which was founded in 1986 and supports around 150 theaters around the country. It gives generous biannual grants, alternating between established and emerging playwrights. Over the years, recipients have included Sarah Ruhl, Rajiv Joseph, Lynn Nottage and Tony Kushner.
No one outside the organization knows exactly why Thompson left, but there has been a fair amount of churn recently at the Denver Center. Sinden’s predecessor, Scott Shiller, came on board in May 2015, but resigned a year later, saying he could no longer serve the organization “due to significant divergence in my vision for the company and that of the leadership of the DCPA board of trustees,” according to the Denver Business Journal. Shiller did not return a phone call from Westword.

The selection of a new artistic director will have a large impact both on the center itself and on the rest of the Denver theater community. Sinden, who oversees the Denver Center Theatre Company and Denver Center Broadway, which brings in touring musicals, as well as a multimillion-dollar overhaul of the physical complex, will supervise the hire, along with Ritchie.

“This will be a really important hire, so we’re not necessarily going to commit to a tight timeline,” Sinden says. “I have met with the leadership team of the theater company and had a conversation with them about division of duties and selecting the next season and management of future seasons. I had a good talk with Kent.

“We have a general idea of what we’re looking for,” she continues. “The team is meeting internally to assess where we’ve been for the last twelve years and over the last forty. We’re listening to all the voices in the company, their needs, wants and desires going forward. I also have part of the search committee identified — who from the company will participate, boardmembers.” The new chair will also sit on the search committee, and “we’ll fortify our partnership with a variety of outreach efforts. I will identify a national search firm that will partner with us; they’ll take the reins for a period of time, help us look through the candidates, do the screening. Having led many national searches, I feel confident in my ability to keep everyone well informed and inclusive in our process.”

She adds that the new artistic director “should have a tremendous amount of creative authority; I’m not sophisticated enough in my love of art to make those decisions. It should be someone mindful of what’s going on in the world, who our patrons are, the Colorado community — someone who has a collaborative spirit, but at the end of the day, they should be the ones who make the decisions.”

Sinden intends to continue the Women’s Voices Fund and the New Play Summit: “They bring very important value to the theater community as well as the DCPA.” She adds, however, that “the director may come in and have their own ideas about what works for them and what they’ve done in another community.

“We take this very seriously; this is a really critical role. We want to continue to have a world-class organization with a world-class leader,” she concludes.

“Right now I think it’s going to be a tougher position to fill than they think,” comments Steinberg. “I may be wrong, but as people understand what happened here, there may be some hesitancy to go to work for a CEO who doesn’t know the field. It is messy, and this is heartless. You don’t do this to somebody on Christmas week after twelve years.”