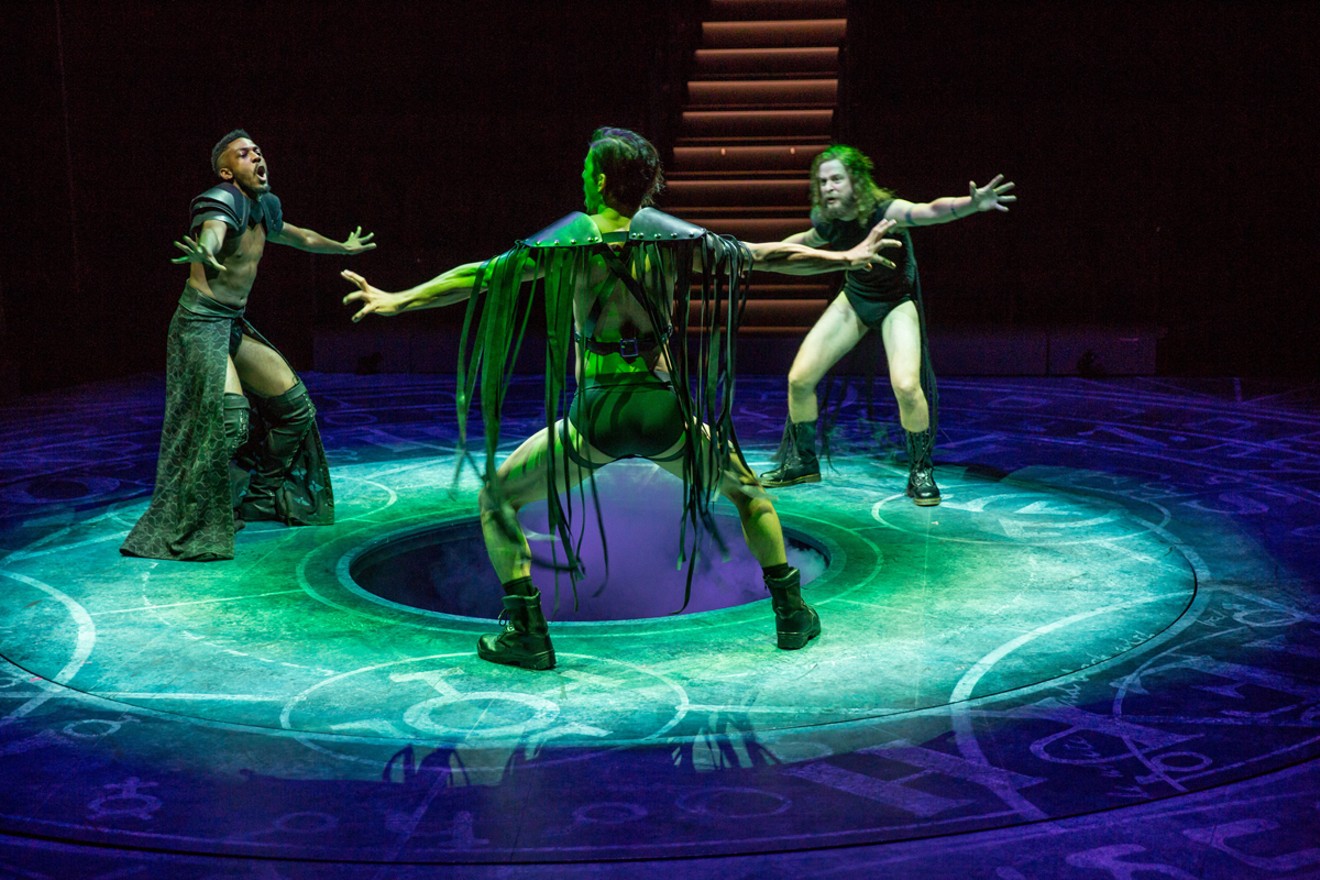 Thaddeus Fitzpatrick (left), Kim Fischer and Joe Goldammer in Macbeth. AdamsVisCom
At the start, I was riveted by the Denver Center’s Macbeth, which boasts an all-male cast, a heavy use of tech and the animating concept that the story is being acted out as part of an annual ritual by a group of warlocks. But shortly after the first scene between Macbeth and Lady Macbeth, the production’s shortcomings began to crowd out whatever creative new insights it provided. The willingness to invent and take risks suggests the possibility of an interesting future for director Robert O’Hara, but this show is an eye-watering, head-thumping, brain-mashing mess from which the play’s deepest aspects are missing.

Macbeth is the first production staged in the newly renovated Space Theatre; it's also the first production of the new season while the organization searches for a new artistic director; Kent Thompson left in March after more than a decade in the position. We won't be able to see the company's future direction until that position is filled, but in the meantime, this is an interesting choice.

The all-male cast actually works pretty well, since this is a very male tragedy, filled with war and warriors and with a murderous struggle for the crown at its center — though it’s Lady Macbeth’s ambition that spurs her husband to fatal action. As Lady Macbeth, Adam Poss is one of the most successful pieces of casting. He doesn’t assume either stereotypically male or female gestures; in a mildly androgynous costume, he asserts power without strutting, admits vulnerability without sentimentality. Lady Macduff has perhaps the most touching scene in the play, as she teases her young son — supposedly around eight, but played here by a mature and bearded Joel Reuben Ganze, who also plays Macduff senior — and later attempts to fend off her killers. Daniel Kyri, wearing a fall of golden hair, does wonders in the role. With his long, shaggy locks and jolting walk, Ariel Shafir appears a truly wild and savage Scottish fighter, and perfect for Macbeth, but I found my attention wandering during several of his scenes; I really couldn’t tell if the problem was his performance or that overwhelming tech.

Because ultimately, this Macbeth is more about special effects and directorial notions than character or story. A murder represented by thundering music, flashing lights and dark figures standing in shadow may work in a way — at least the first time. But at the heart of murder, there’s human suffering and terrible human rage, and we never see murderer or victim as real people. What we get throughout the evening is big sound, startling roars of thunder and flashes of lightning, a revolving platform filled with hieroglyphics, a trap door from which ghouls emerge and into which corpses fall, a ceiling pentagram that changes shape and color. The costumes are a miscellany in which black leather predominates; some are interesting, even illuminating, others distracting.

And sometimes the tech just plain misfires. At one point, a sort of swirl of light makes the round trap look almost like a kiddie pool. The effect is enhanced when the lights brighten and you see three men lying around, bare-bodied but for what look like swimming briefs. Except that these aren’t sunbathers; they’re the supposed corpses of King Duncan and his attendants.

Then there’s Macbeth’s hallucination as he prepares to murder Duncan: “Is this a dagger that I see before me?” As Shafir utters this famous line, we see a blue, vaguely dagger-shaped light. Peering a little closer because it seems a bit lumpy for a knife, you realize it’s a white-gloved arm with blue light shining on it. Then you notice several warlocks have glided into position around the playing space, each holding up a gloved, blue-lit arm to suggest a host of ghostly knives. But these are living actors, not disembodied images, and you can’t help pondering the irony that these elbow-length gloves look less like daggers than something a debutante might wear to a ball. At that point, you realize Macbeth has finished speaking and you haven’t actually heard what he’s said.

This is a play about battle, but the fights are the weakest part of the production. The characters refer often to their swords, but no sword ever materializes — unless you count those gloves — and the actors go at each other bare-handed. Everything in Macbeth leads up to that final, climactic battle. “Turn, hellhound, turn,” declaims Macduff…but no significant fighting follows.

O’Hara gets points for originality and guts, but he needs to trust more in the words, the subtleties underlying them, and Shakespeare’s pulsating silences.