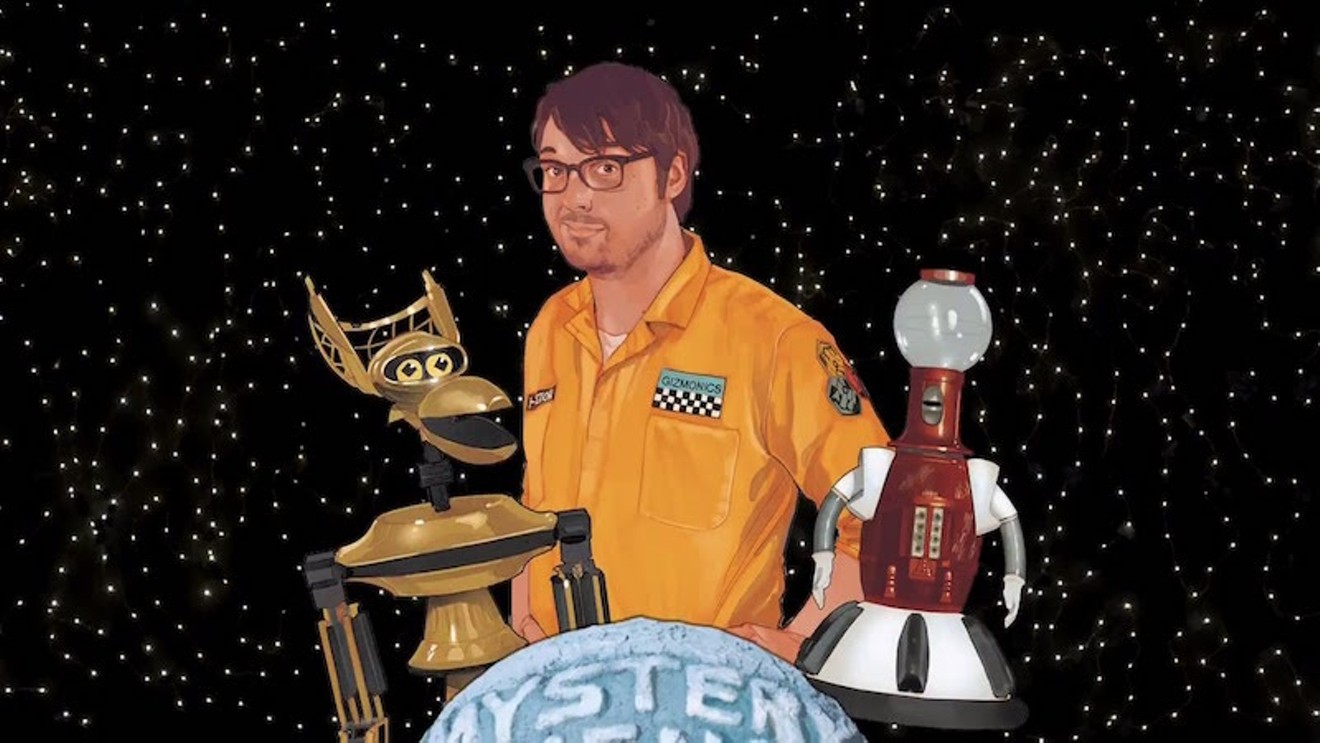 The Satellite of Love cruises through the Paramount Theatre on July 18 for Mystery Science Theater 3000 Live. Mystery Science Theater 3000
Now that the dog days of summer are here, it's time for another Westword inventory of the ten best comedy shows in Denver. Though July is dedicated to both ice cream and hot dogs, Denver's comedians, producers and vendors haven't taken the summer off. Indeed, so robust are the comedic offerings that winnowing the list down to ten was a challenge that led to omissions like Steve Martin and Martin Short's two-man show on July 22 at the Bellco Theatre (which sold out long ago, anyway, but here's a ticket link if you're willing to face price gouging on the resale marketplace). With everything from the triumphant return of erstwhile local Chris Charpentier to visits from movie-riffing robots and none other than Dave Chappelle, we're confident your ribs will be sufficiently tickled in July. Here's our top ten, in chronological order.


Chris Charpentier
Sunday, July 2 and Wednesday, July 5
Comedy Works Downtown
The Denver comedy scene loves nothing more than seeing one of its own succeed, and over the past few weeks, former hometown boy Chris Charpentier has left locals swelling with pride. On Tuesday, June 20, Charpentier smashed his late-night debut with a well-honed set on Jimmy Kimmel Live!, while his friends and fans organized viewing parties all over the city to celebrate. Charpentier, who's also appeared on Uproarious, Flophouse and Those Who Can't, reaches another career milestone this week with a pair of headlining engagements at his home club, the Downtown Comedy Works, at 7 p.m. on Sunday, July 2 and 8 p.m. on Wednesday, July 5. Visit Comedy Works events calendar to learn more and buy tickets, $14.

Pussy Bros.
Pussy Bros.
Friday, July 7, 7 p.m.
El Charrito
The Pussy Bros. is a Denver-based stand-up-comedy super group featuring Christie Buchele, Janae Burris and Rachel Weeks, who've united to forge their own path through a historically male-dominated industry. Among the funniest comics in town, the Bros. have toured the country together, co-headlined a comedy festival and produce a pair of monthly stand-up showcases. One of the Comedy RoomRoom at El Charrito's earliest successes, the first Friday Pussy Bros. show remains a highlight of the five-star dive bar's increasingly busy entertainment calendar. The group's July lineup is packed with out-of-towner comics like Oliva Cathcart (Atlanta), Nicole Conlan (New York City) and Judge Drizz (Los Angeles), along with Lila Bear (a recent transplant from Memphis) and the triumphant return of Brad Galli and headliner David Rodriguez. Admission is free. Visit the Pussy Bros. Facebook page to learn more.

Geoff Tice
Guest List: Comedy Album Recording
Friday, July 7, 8 p.m. and 10 p.m.
The Bakery Arts Warehouse
Last July, local comedian Ben Bryant took a big gamble on a new venture, a monthly standup and sketch comedy showcase called Guest List at the Bakery Arts Warehouse, a DIY-friendly venue that had never hosted comedy before. Investing large sums of time and money (scarce resources for comedians) into renting the space, curating the lineups and attracting a crowd, Bryant weathered the dizzying highs and dispiriting lows of producing a comedy show, persisting until he reached the milestone of a one-year anniversary. To celebrate, he's inviting forty different local comics (including Westword's own Byron Graham) to perform streamlined three-minute sets and compiling the results into an album. Essentially a mixtape of some of Denver's best comedians circa 2017, the recording is divided into two different shows, with one beginning at 8 p.m. followed by another at 10 p.m. on Friday, July 7. Visit Guest List's Facebook events page to learn more and follow the Eventbrite link to buy tickets, which cost $10.


Dave Chappelle
Thursday, July 13
Bellco Theatre
After years away from the mic, many Dave Chappelle fans worried that he'd pull a J.D. Salinger act and never perform again. Luckily for everyone, the appeal of the stage is irresistible, and over the past few years Chappelle has pursued comedy with renewed vigor. In addition to hosting the infamous post-election episode of Saturday night live and touring constantly, Chappelle recently released a pair of one-hour specials for Netflix, with a third on the way. Thanks to frequent appearances on local stages, Coloradan comedy nerds have benefited from the Chappelle renaissance more than almost anywhere else in the country, but that's no reason to delay seeing one of the country's greatest living comedians. Remarkably, the show hasn't yet sold out. Visit the Bellco Theatre's events page to learn more and buy your tickets, $69.50 - $89.50, post haste. Lucky ticket-holders for Chappelle's sold-out Red Rocks show on July 15 know the importance of acting quickly all too well. Bellco Theatre recommends arriving early, and like every Chappelle performance, phones and cameras are strictly prohibited.

Read on for more of the best comedy events in July.

Hari Kondabolu
July 13-15, showtimes vary
Comedy Works Downtown
A veteran TV writer and correspondent on the unfortunately canceled Totally Biased with W. Kamau Bell, Hari Kondabolu has emerged as one of the sharpest political commentators in comedy. As a standup, Kondabolu has performed on such tastemaking shows as Conan, John Oliver's New York Standup Show, Jimmy Kimmel Live! and his own Comedy Central Presents half-hour special. Over the course of two albums, 2014's Waiting for 2042 and 2016's Mainstream American Comic, Kondabolu established the sharp political commentary and unique perspective that's won him fans all over the world. Fittingly called "The Best Political Comedian You Don't Know Yet" in a Wired profile, Kondabolu can be heard with his former boss W. Kamau Bell on the Politically Re-Active podcast. Visit the Comedy Works events page to learn more and buy tickets, $18-$26.


Mystery Science Theater 3000 Live
Sunday, July 18, 8 p.m.
Paramount Theatre
Recently resurrected by Netflix with a new cast and story line, the return of Mystery Science Theater 3000 was a boon to movie geeks and comedy nerds alike. The show's influence on both cinema and joke-telling is hard to overestimate; even locally produced shows like the Mile High Movie Roast or Cartoons and Comedy couldn't exist without the example of the '90s basic-cable staple. While Meltdown's Jonah Ray fits comfortably into the Joel/Mike role, Tom Servo (voiced by Baron Vaughn) and Crow T. Robot (Hampton Yount) still manage to land the best jokes. Luckily for local fans, the Satellite of Love is swinging through Denver on the Mystery Science Theater 3000 Live tour. Jonah and all the robots are crashing the Paramount Theatre at 8 p.m. on Sunday, July 18, to provide their special brand of mocking commentary during a screening of fan favorite Eaargh, in addition to a secret surprise movie and a boatload of new jokes and riffs. Visit paramountdenver.com to learn more. Tickets, $39.50-$49.50, are available via Altitude Tickets.

Luenell
July 20-23, 7:30 p.m. and 9:45 p.m.
Denver Improv
Luenell Campbell may be billed by her first name only, but that's because there's no mistaking her for anyone else. A prolific character actress and standup veteran, Luenell first rose to national prominence as the opening act on Katt Williams's American Hustle Tour and concert film of the same name. In addition to performing on Snoop Dogg's Bad Girls of Comedy and Stand-up in Stilettos, Luenell has had memorable roles in everything from comedies like Borat or the Think Like a Man and Hotel Transylvania series to action thrillers like The Rock and Taken 2. Headlining all weekend at the Stapleton stalwart comedy club, locals have six opportunities to see her perform. Don't miss them. Visit the Denver Improv events page to learn more and buy tickets for $20.


Propaganda! Featuring Michelle Biloon and Justine Marino
Friday, July 28, 8 p.m.
Soiled Dove Underground
Since relocating to the Soiled Dove Underground a few months back, Propaganda! has put together a series of packed showcases by bringing top-notch headliners to the Lowry-adjacent concert venue. This month is no exception as hosts Stephen Agyei and Eric Henderson (along with Matt Monroe, who still produces the show from Portland) have put together one crackerjack of a showcase. With local stage-smasher Anthony Crawford and visiting New York comic Nicole Conlan opening for co-headliners Michelle Billoon (The Late Late Show) and Justine Marino (Roast Battle), this is some propaganda you might want to believe. Visit Propaganda's Facebook page to learn more. Admission costs $10 via Ticketfly.

Nikki Glaser
July 28-29, 7:15 p.m. and 9:45 p.m.
Comedy Works South
After developing her voice on the Midwestern club circuit, Nikki Glaser made a smashing television debut in the seventh season of Last Comic Standing, where she stood out with her frank material and unflappable stage presence despite only advancing to the semi-finals. In the years since, Glaser has worked exclusively in television, appearing on @Midnight and The Late Late Show With James Corden, as well as in the film Trainwreck and several sketches on Inside Amy Schumer. Lately, Glaser seems to have found a home on Comedy Central, where she hosted her own series, Not Safe With Nikki Glaser. The network also produced her latest one-hour special, Perfect, which premiered last April.  A favorite among Denver comedy nerds, Glaser has headlined Sexpot shows and participated in last year's High Plains Comedy Festival, but now she's returning here to headline one of our finest local clubs. Visit Comedy Works' events page to learn more and buy tickets for $28.

Looking for more to do? Visit Westword's online calendar.