Dee Covington and Chip Walton look forward to retirement. Courtesy of Curious Theatre Compan
Curious Theatre Company’s founder and producing director, Chip Walton, recently announced the company’s 25th season, which opens September 10 with Heroes of the Fourth Turning, by Will Arbery. This announcement was coupled with another, more startling one: Walton and co-founder and education director Dee Covington — to whom he is also married — will leave the company they created 24 years ago after consulting and collaborating through the coming season with talented actor-director Jada Suzanne Dixon, who has been part of the Curious team for a decade and will take over as artistic director.

The 25th season will consist of five plays that, according to the announcement, explore the question: “What does it mean to be an American now?”

Curious has occupied a unique space in the Denver theater ecosystem. It was perhaps the first mid-sized stable, professional theater to occupy the space between the ever-growing Denver Center Theatre Company and a handful of smaller theaters, which often seemed to appear and then vanish. Using the motto “No guts, no story,” Walton has been dedicated to showing contemporary work, most of it politically progressive and exploring significant issues. He assembled a semi-permanent group of talented artists as well as creative tech people to form an ongoing company. And Covington, among other outreach tasks, created Curious New Voices, a summer playwriting workshop for young students, some of whom went on to professional careers.

At a Curious production, you could always expect strong acting and artistic, sophisticated tech. Some years back, Walton and Covington were able to purchase the charming old church at 1080 Acoma Street that housed the company, brightening the auditorium and creating a comfortable upstairs pub where patrons could get drinks while mingling and discussing plays with each other before a show or during the intermission.

My first visit to Curious — and my first assignment as a regular reviewer — took place less than a week after 9/11, when the world seemed to be tilting dangerously on its axis. Walking down the aisle to my seat, wondering if attending theater wasn’t a frivolous thing to do during this time of crisis, I saw a white-haired man sitting in a wheelchair in the front row, solid as a rock, a walking stick planted firmly at his feet. I recognized him immediately — as I imagined almost everyone else in the house already had. This was Henry Lowenstein, a man who had witnessed some of the worst that humankind was capable of. An Austrian Jew, he escaped as a child on England’s kindertransport. He somehow emerged from that terrifying and utterly disorienting time as a father to the Denver art scene, forming a theater in which he created vibrant and significant productions, hiring diverse talents long before Black Lives Matter, and bringing intriguing contemporary work to a town that had never heard of Sam Shepard or Athol Fugard before his arrival. Lowenstein died in 2014. Seeing him in the audience at a shaky moment in time was deeply comforting. His presence also suggested something about the relevance of Walton’s vision that I would come to later understand.

The play that night, Coyote on a Fence, was about two prisoners on death row: One, played by Terry Burnsed, was thoughtful, literate and possibly innocent; the other, played by Gene Gillette, was a member of the Aryan Nation, who talked about mud people and a Jewish cabal that runs America. His crime was blocking the doorway of a Black church with his truck, trapping the congregants inside, and setting the building on fire. Questions of good and evil surged through the text. Even the prison guard who was paid to assist at executions (played by Judy Phelan-Hill) could never bear to watch an execution carried out. Skillfully directed by Walton and acted with power and intelligence, Coyote on a Fence explored questions pressing almost everyone’s mind that night.

Over the years, Curious has introduced us to dozens of contemporary plays, many by writers of color. Casts were diverse. Some of the productions were controversial, some outright shocking. In Bruce Graham’s White Guy on the Bus, an apparently reasonable man suddenly reveals a violently murderous racism. The production must have required some of the most emotionally difficult acting work that the two talented leads — Sam Gregory and Jada Dixon — had ever undertaken. Appropriate, written by Branden Jacobs-Jenkins, included an entirely white cast, yet dealt with some of the darkest facets of our country’s racist history. Directed by Jamil Jude, it seemed to scrape away your skin inch by inch as you watched.

Then there was the lyrical work of Quiara Alegria-Hudes and the sheer triumphant power of Tarell Alvin McCraney’s The Brothers Size. As well as the incisive originality of Tony Kushner’s Homebody/Kabul, in which Covington began the evening with a riveting hour-long monologue that earned her a Best of Denver award — one of many Curious received from Westword over the years.

The artistic fare wasn’t always heavy or serious. There was — among other comic offerings — the wicked howling humor of Robert Askins’s Hand to God, in which a satanic hand puppet possesses the body of a young puppeteer, wreaking havoc and horror, and the satiric comedy of Yasmina Reza’s God of Carnage. 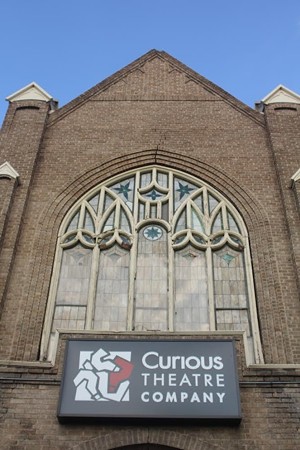 Sometimes we saw pure magic on the Curious stage. In an early production of Cloud Tectonics, by Jose Rivera, a fantastical and beautifully designed bubble dominated the action. Within it, time stopped and miracles were possible. Outside, time slipped its tether and sped at least one of the characters into instant old age.

“We have always been pretty uncompromising about trying to do work that was an absolute reflection of whatever was happening in our country or our time,” Walton says. “This has always been our north star, beyond commercial considerations or possible controversies or audience tastes or anything else. ... We have always been a passionately mission-driven organization, and that may be our proudest accomplishment.”

Covington, who says she has always been a political artist, concurs. “I believe theater has the power to open eyes and hearts and change the world,” she says.

Both directors say they’ll miss many aspects of their work at Curious. “The collaboration with so many talented and visionary artists,” Walton says. “The thrill of starting to create a vision for a production together, the resiliency throughout with evolving and adjusting that vision, the discoveries and surprises at every step, and the realizations on opening night of all that we’ve accomplished, as well as all that’s still to be discovered throughout the production run.”

As an entrepreneur, he adds, he will also miss accomplishing something so many people thought was impossible, and also the pleasure of working with the theater’s patrons. He notes that some people may think of dealing with patrons solely in terms of fundraising, but he sees it as “building our Curious community.”

Covington, too, has a deep connection to Curious. She has done a great deal of acting and directing over the years, as well as her outreach work, including Curious New Voices. “I will miss dreaming my visions into motion,” she says.

Perhaps surprisingly, Covington will also miss the kitchen. “From that warm and welcoming place I have created opening-night parties, subscriber brunches, sponsor dinners and community events,” she comments, adding, “Some of my favorite memories are centered around a group of artists slicing, dicing and stirring ingredients for events while catching up on our lives. It has been a place that connects us all as family.”

Covington oversaw Curious’s artistic company, and this, too, is something she’ll miss. “I have fiercely believed in the power of this constellation of exemplary artists to come together to create a body of work that is accelerated each and every time we meet again on the Curious stage," she reflects. "Who we are, and what we are to one another in that circle, radiates out to the stage, the community, to the world.”

But there are aspects of the work that neither Walton nor Covington regret leaving. “It will be nice to step away from the stress and challenges that are just baked into running a cultural nonprofit, especially in the performing arts,” says Walton. “It’s easy to just see the art that happens on the stage, but there is so much foundational work that has to happen before the lights go down.”

The building housing the company is “beautiful and spiritual and so lovely,” comments Covington. “It is also fraught with heating and cooling challenges:  A terrible, horrible, awful smell that emits from the basement... No real off-stage wing space, which presents a lot of design challenges. No budget for building improvements that this dear old space requires and deserves. We’ve made it work for 25 years. But it has been at times a beast.”

And yet “we did exactly what we set out do at the very beginning,” says Walton. “We paid artists — never enough, but much more than many. We provided health insurance and pensions to union members. We created together an artistic home for so many artists, and a body of work that speaks for itself.”

“I have occupied a very blessed seat at the table that is Curious," Covington adds. "At this table I have dreamed up many amazing programs, events, plays, artful moments. ...What I have had the support to accomplish here is so deep and far-reaching. I am personally waiting for the day that a Curious New Voices playwright will win a Tony or a Pulitzer, or be produced on the Curious stage.”

Asked what the future holds, both directors say that after working with Dixon on a smooth transition, they are ready for a break.

“Like Ram Dass said, just sit in a cabin in the woods for a while, until someone tells me what to do next. ... I think I’m just going to trust that advice,” says Walton.

Covington says she’ll simply “unplug and feel out what happens next. Learn more Spanish. Trust that everything is unfolding just as it should.

To learn more about Curious Theatre Company and find showtimes and tickets, visit curioustheatre.org.
KEEP WESTWORD FREE... Since we started Westword, it has been defined as the free, independent voice of Denver, and we'd like to keep it that way. With local media under siege, it's more important than ever for us to rally support behind funding our local journalism. You can help by participating in our "I Support" program, allowing us to keep offering readers access to our incisive coverage of local news, food and culture with no paywalls.
Make a one-time donation today for as little as $1.