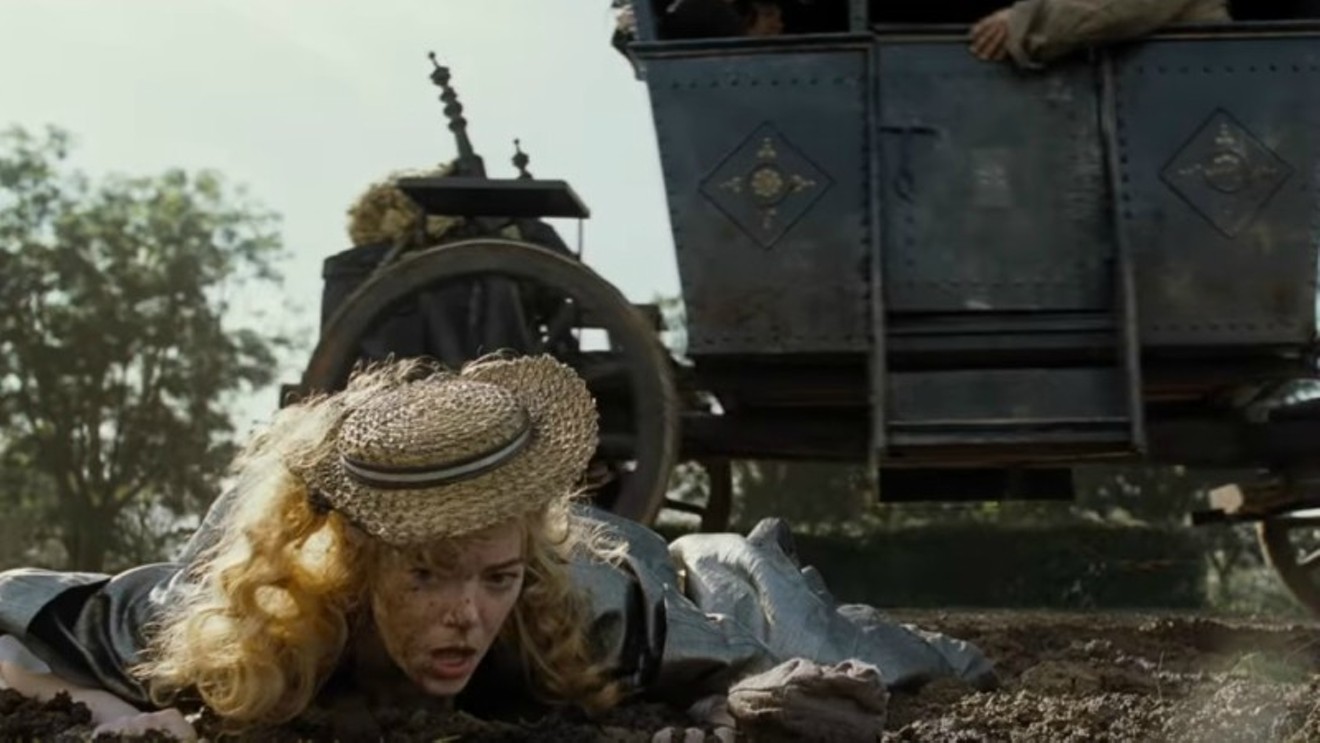 Emma Stone getting dirty in The Favourite. Denver Film Festival via YouTube
Again this year, Denver Film Festival artistic director Brit Withey is offering his must-see picks for each day of the fest — including many flicks that movie lovers might otherwise miss amid the flood of silver-screen goodies. Today he spotlights a selection for October 31, The Favourite, and provides an overview of other festival highlights.

The Favourite
Directed by Yorgos Lanthimos
8 p.m. Wednesday, October 31
Ellie Caulkins Opera House
"I'm a huge fan of his films," the Denver Film Festival's Brit Withey says of Yorgos Lanthimos, director of The Favourite, which opens the 41st annual edition of the Mile High City staple tonight during a red-carpet presentation at the Ellie Caulkins Opera House. "I've seen everything he's made before, and this one sounds amazing. Everyone who I've talked to who's seen it says it's really remarkable."

As a bonus, the film's biggest name, Emma Stone, is a fest favorite thanks to her appearance at the Ellie in 2016 on behalf of La La Land, a thoroughly entertaining modern musical for which she went on to win the Academy Award for Best Actress.

This time around, Stone plays the impoverished cousin of Lady Sarah (Rachel Weisz), the companion to Queen Anne (Olivia Colman) in an eighteenth-century England conjured up from the twisted imagination of Lanthimos, whose previous films, including 2015's The Lobster, are "an acquired taste," Withey admits. "They're quirky and they push some buttons. If someone came to me and said, 'Are you considering a film of his for one of your red carpets?,' I would have said, 'Oh, no. We would definitely want to play it in the festival, but a red carpet?' This one seems to be a step in a different direction, though. I think it's a great choice for opening night."

Here's a look at the trailer for The Favourite.


The eleven days of DFF41 that follow will include screenings of more than 200 films long and short, including ten from Hungary, this year's country of focus.

Withey reveals that Denver Film Festival co-founder Ron Henderson "came in and programmed the Hungarian section. He has deep ties to many of the film-sale agents who work with Hungarian films, and when he and I went to the Berlin Film Festival in February, we noticed a fair amount of films from Hungary in the program and decided to go that way."

Thus far, Withey has caught two of the Hungarian films included in the fest. He calls Jupiter's Moon, screening at 8:45 p.m. on Saturday, November 10, and 6:45 p.m. Sunday, November 11, at the UA Pavilions, "a really unusual look at the Syrian refugee crisis. When it started, a lot of refugees were flowing into Hungary, and it really affected the political bent of the country. They started closing down borders and made a right-wing switch. But Jupiter's Moon is sort of a magical realism film. It's the story of a refugee who is wounded crossing the border into Hungary, and after that happens, he flies up into the sky in sort of a martyr-like pose — but he's an unwilling martyr. It's a very strange little film, and also a really interesting one."

He also lauds Budapest Noir, which he describes as "a pretty straightforward throwback noir film." The flick will unspool (figuratively, at least) at 6:30 p.m. Friday, November 9, and 1:30 p.m. Saturday, November 10, at the UA Pavilions, and its director, Éva Gárdos, will be on hand for both screenings.

These offerings are hardly the only ones with an international flavor at the festival. "We also have a new sort of spotlight section on U.K. and Irish cinema," Withey points out. "We put together a six-film focus, including a couple of documentaries and several narratives spread throughout the program." 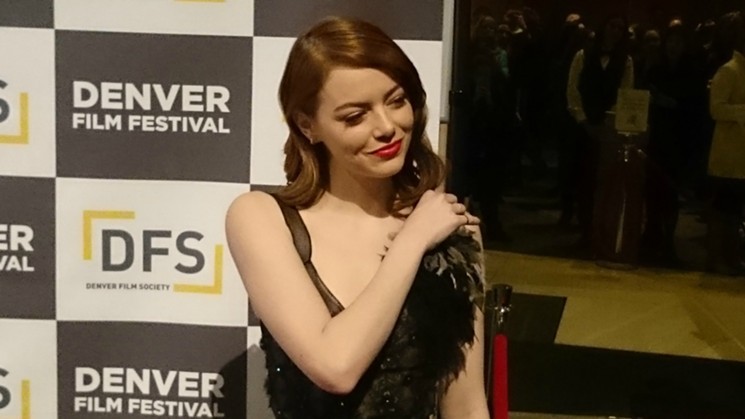 Emma Stone at the 2016 Denver Film Festival.
Photo by Michael Roberts
Among the offerings is Anna and the Apocalypse (11:45 p.m. Friday, November 9, and 9:30 p.m. Saturday, November 10, at the Sie FilmCenter), whose online blurb teases: "Just in time for Christmas, the apocalypse has begun, and the undead are descending on the sleepy Scottish town of Little Haven. Now teenaged Anna and her friends must fight — not to mention sing and dance — to survive in this zany, candy-colored zombie holiday musical." Additionally, Withey points to Swimming With Men (7:30 p.m. Monday, November 5, and 1:45 p.m. Tuesday, November 6, at the Sie FilmCenter): "It's kind of like The Full Monty, except with middle-age men in Speedos who want to compete in the world synchronized-swimming championship. The festival definitely leans dark, so it's always nice when we get in some nice crowd-pleasing films for people. And this is one."

A growing area of programming for the festival involves the Virtual Reality & Immersive Experience section. Ticketed selections are supplemented by exhibitions in the festival annex, on the second floor of the McNichols Building, 144 West Colfax Avenue, that will be free and open to the public November 1 through 11; the hours are 3 to 8 p.m. Monday through Wednesday, 3 to 9 p.m. Thursday and Friday, and 11 a.m. to 9 p.m. on Saturday and Sunday. "I'm super-excited about all the VR stuff," Withey enthuses. "I've kind of dipped my toe in a little bit — putting on a headset and having this experience. But the technology is evolving so rapidly that now you're able to experience this with fifteen or twenty people together, and they last for thirty minutes. It all sounds extraordinary."

There are older-school presentations, too, Withey says: "We've got a couple of political-journalism panels happening this year," including "Politics, Journalism and the Death of Private Life," set for 5:30 p.m. Thursday, November 8, at the festival annex prior to the screening of the Gary Hart-themed film The Front Runner. "I think they'll be very timely. And we've got a great partnership going with Arthyve, another nonprofit here in town, which has commissioned local artists to create new work from abandoned film. They're taking found film and repurposing it into new short films that we're going to show at the McNichols building annex" at 7:30 p.m. on Sunday, November 4.

That's not enough? Click to access all of the Denver Film Festival's selections and to purchase tickets.
KEEP WESTWORD FREE... Since we started Westword, it has been defined as the free, independent voice of Denver, and we'd like to keep it that way. With local media under siege, it's more important than ever for us to rally support behind funding our local journalism. You can help by participating in our "I Support" program, allowing us to keep offering readers access to our incisive coverage of local news, food and culture with no paywalls.
Make a one-time donation today for as little as $1.