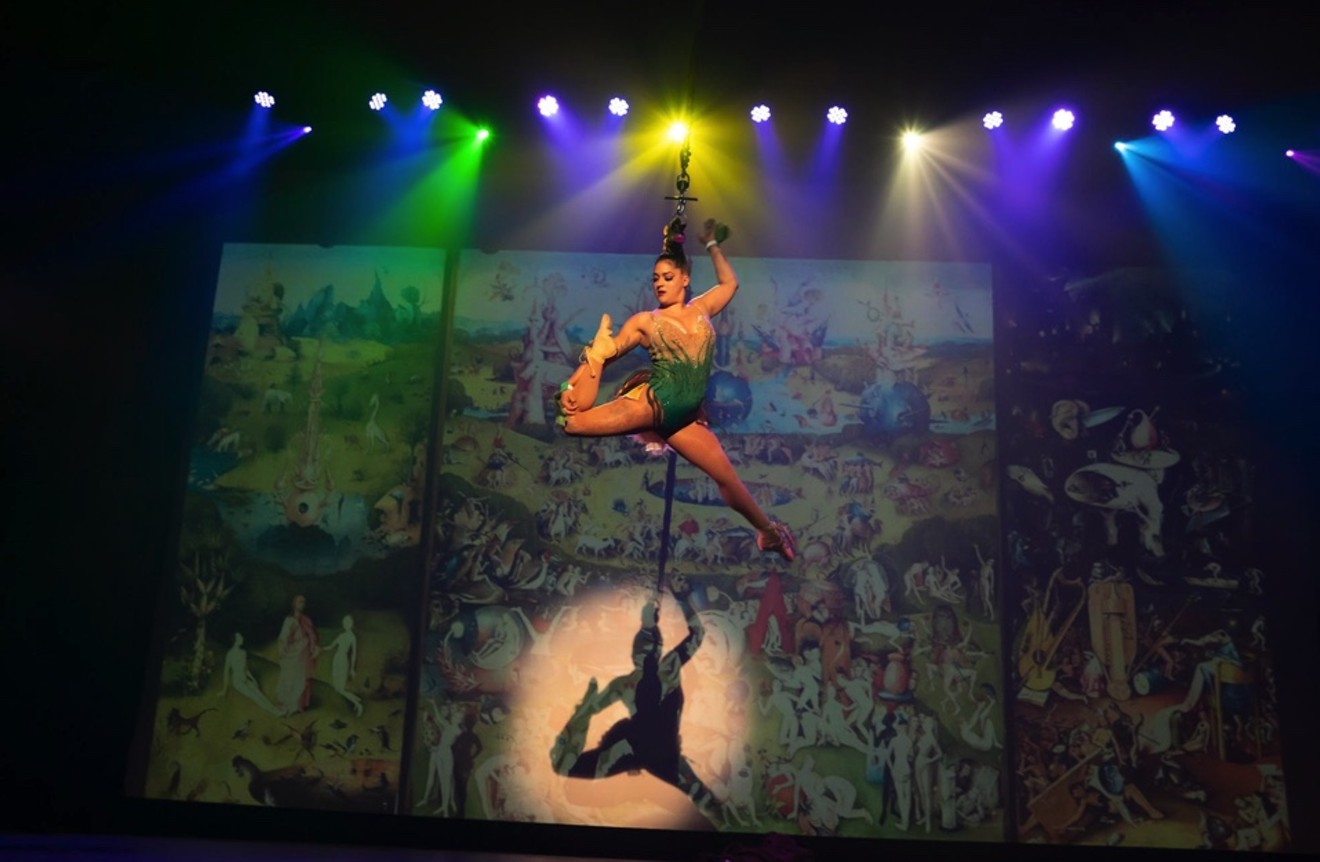 "I’m Native American. In my tribe, you don’t cut your hair unless you’re in mourning or going off to battle, so my entire life I’ve had hair down to my knees. It’s really sacred,” Morphet-Tepp told us in June. "I’ve had super-healthy hair my whole life, and when I saw hair hang, I was like, ‘That’s my act — that’s for me! That’s why I’ve had this hair for thirty years!’”

She's performed around the country with several circus companies, and the Go-Big Show even put her act on TV in January, when she lifted celebrity judge Rosario Dawson in the air during her performance. And last month, she produced and curated a show with the Bindlestiff Family Cirkus in New York City using an all-Indigenous cast.

Now she's trying to add yet another impressive accomplishment to her résumé: setting a world record for holding the most weight while suspended by her hair. She hopes to hold 300 pounds, and given that she's swooped drunk men off the floor at parties, Morphet-Tepp has a flying start.

"I've been training heavy weight-basing for two years," she says. "It started as preparation for TBS's Go-Big Show. Even though my performance partner was twice my size, we decided I would base him for the show, and that started my journey in seeing how much weight I could lift hair hanging. It turned out to be a lot more than I imagined!"

This is the first time someone has attempted a hair-hang world record, but Morphet-Tepp also hopes to beat the record "weight lifted with hair" through the feat.
"No one else has attempted this particular record. I will be setting it for the first time. The most similar record, 'weight lifted with hair,' is only set at 200-ish pounds; however, I wrote in for a new record, as the previous way weight was lifted by hair is dangerous on the neck," she explains. "My new record will be anatomically wiser, with me maintaining my spinal alignment through the lift! The man who set that record wasn't suspended by his hair. Rather, he essentially did a squat with weights clamped to his hair and his chin tucked. Since I'm breaking that record and setting the record for suspended weight holding, I wanted to find a safer way to do it rather than having my neck cranked into a vulnerable position. Why anyone wanted to lift weight the other way is beyond me."

Morphet-Tepp is aiming to set the world record at the Denver Circus Collective studio at 2 p.m. today, November 10. While that's not open to the public, you can catch her in person on December 3, when she'll be headlining Carnivale de Sensuale: Krampus at the Oriental Theater.

"I hope that people see what I do and hear my story and feel inspired to achieve their dreams, whether or not they initially even seem doable," Morphet-Tepp says. "We are capable of more than we know! I also just wrapped up producing the first all-Indigenous variety show ever in NYC. I wasn't initially sure if that was doable, either, but was willing to try — and lo and behold, sheer magic came from those efforts."
KEEP WESTWORD FREE... Since we started Westword, it has been defined as the free, independent voice of Denver, and we'd like to keep it that way. With local media under siege, it's more important than ever for us to rally support behind funding our local journalism. You can help by participating in our "I Support" program, allowing us to keep offering readers access to our incisive coverage of local news, food and culture with no paywalls.
Make a one-time donation today for as little as $1.
Emily Ferguson is Westword's Culture Editor, covering Denver's flourishing arts and music scene. Before landing this position, she worked as an editor at local and national political publications and held some odd jobs suited to her odd personality, including selling grilled cheese sandwiches at music festivals and performing with fire. Emily also writes on the arts for the Wall Street Journal and is an oil painter in her free time.
Contact: Emily Ferguson