Twelve Things to Do for Free in Denver This Weekend

"I Only Have to Land It Once," at Black Book Gallery. Alphonzo Rawls
It's another big week for arts and entertainment in the Mile High City, with Denver Arts Week continuing through November 13, the Denver Film Festival rolling through November 14, and holiday happenings just beginning.

Keep reading for twelve of the best free events in Denver this weekend.

Time to start shopping!
Courtesy of A Paris Street Market
Rue de Noel, a Paris Street Christmas Market
Saturday, November 13, 10 a.m. to 5 p.m.
Douglas County Fairgrounds and Events Center, 500 Fairgrounds Drive, Castle Rock
Once a year, the old-school A Paris Street Market flea gussies up for the holidays with a Christmas version. But the holiday selection is still eclectic, with the vintage aura you know and love: old-fashioned molded and glittered glass ornaments, jolly plastic lawn Santas and reindeer in mid-flight, and anything else you might find packed up in Grandma’s attic, including gift items, clothing, art and antiques. Admission and parking are both free; learn more here and RSVP at Eventbrite.

Bighorn Sheep Festival
Saturday, November 13, 10 a.m. to 6 p.m.
Strousse Park, 600 Sixth Street, Georgetown
Gateway Visitor Center, 1491 Argentine Street, Georgetown
Georgetown, that historic little mountain community up I-70 with vintage shops and Victorian houses, also has a great spot for viewing bighorn sheep, and the town built a whole festival out of that awe-inspiring view. The Bighorn Sheep Festival is a full-day fest complete with spotting scopes, a photography contest, an archery workshop, a fun run, nature hikes, campfire s’mores and more. It’s a family affair like no other, and it’s free. Find a festival map and information here.

Balefire Anniversary Open House
Saturday, November 13, 10 a.m. to 7 p.m.
Balefire Goods, 7513 Grandview Avenue, Arvada
Balefire Goods in Olde Town Arvada opens its doors wide this weekend for a fourth-anniversary celebration equally suitable for old friends of the jewelry boutique and folks who’ve never been there before. There’ll be bites and bubbly, live demos and a trunk show with the metal engravers of Tuggle Designs, discounts and more. It’s also a chance to shop Balefire’s current Affordable Art Show, and shoppers who spend more than $50 in the shop will receive a free gift. Get in the mood for shopping local; learn more here. RSVP at Eventbrite.


DFF Virtual Reality Arcade
Saturday, November 13, 10 to 11:45 a.m. and 7 to 8:30 p.m.; Sunday, November 14, 10 to 11:45 a.m.
The Festival Annex, McNichols Building, 144 West Colfax Avenue
As part of the 44th Denver Film Festival, the Virtual Reality Arcade is returning. Explore the best of new-cinema storytelling through twelve virtual-reality experiences curated from all over the globe — including favorites from SXSW, Tribeca, Venice International Film Festival and Sundance. Although the VR includes paid programming, there are free times daily; find the full schedule here.

Armando Silva "SOMOS" Unveiling
Saturday, November 13, 11 a.m. to 1 p.m.
Anythink Huron Street, 9417 Huron Street, Thornton
Muralist Armando Silva is the final artist in the Boulder Museum of Contemporary Art at Anythink Fall Artist Showcase, which included textile artist Alejandra Abad at Anythink Wright Farms and photographer Juan Fuentes at Anythink Bennett. In October, Silva conducted a series of workshops with local teens, the themes of which inspired the "SOMOS" interior mural now installed at Anythink Huron Street. Silva will be on hand for the unveiling, which will include interactive programming. Light refreshments will be served at this free event; find out more here.

An Alien Resistance exhibit for IS Fair.
Courtesy of IS Fair
IS Fair 20202021
Saturday, November 13, and Sunday, November 14, noon to 6 p.m.
Globeville Rec Center, 4496 Grant Street
Fort Greene Bar, 321 East 45th Avenue
Explaining what IS Fair is could fill many screens, but as the people who run this show explain, it’s a “pseudo-science fair for free-thinking adults, artists, miscreants, pranksters and anyone with a good story to tell” who gather every four years in a different city to share tri-fold exhibits and short films. Denver organizer Peter Miles Bergman notes that it’s been a good while since the fair was last here (it was supposed to return in 2020, when the Denver fair had to be postponed). But now’s the time: IS Fair is free, in every sense of the word; learn more and find the full schedule here. 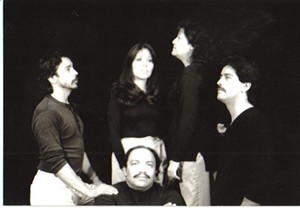 Clockwise from left: Tony Garcia, Sherry Coca Candelaria, Debra Gallegos, Rudy Bustos and Angel Mendez Soto.
Su Teatro
Intro to Chicano History: 101
Saturday, November 13, 3 p.m.
Su Teatro, 721 Santa Fe Drive
Since they started out without a space, performing political street theater in the ’70s, Tony Garcia and a host of Su Teatro stalwarts have been creating art for and about the Chicano community for fifty years. To celebrate, they’ll bring back several favorites from over the years this season, including the storytelling-in-song called Intro to Chicano History: 101, which joyfully shares “500 years of Chicano history in 2 hours!” Catch a free concert reading with the original cast members this weekend at Su Teatro’s now permanent home on Santa Fe Drive. It’s free, but you’ll have to register online in advance here.

Outlets at Castle Rock Tree Lighting
Saturday, November 13, 3:30 to 6:30 p.m.
Outlets at Castle Rock, 5050 Factory Shops Boulevard, Castle Rock
Santa arrived at the Outlets of Castle Rock last Saturday, bringing a 55-foot white fir tree from the Shasta-Trinity National Forest. Santa will be back for the tree lighting on November 13, with an appearance by the Denver Broncos Cheerleaders, music from the Radio Band, a fireworks show and a live performance by Grammy Award-winning country-music artist CAM. Find out more here.

Slay the Runway
Saturday, November 13, 6 to 8 p.m.
Roser ATLAS Center, ATLAS Black Box Experimental Studio B 2, 1125 18th Street, University of Colorado Boulder
Something remarkable happened when a dozen LBGTQ kids, ages twelve through eighteen, came together once a week for two months at Longmont's Firehouse Art Center and the Boulder Public Library's Building 61 Maker Space to learn not only how to make and upcycle garments, but also how to become more comfortable in their own skin as neurodiverse teens. After the tutelage of experts in fashion design, fiber art, makeup and multimedia, they're now ready to show off their fashions and personalities at Slay the Runway, a one-time show in the ATLAS Black Box at CU Boulder. Admission is free, but space is extremely limited; make reservations in advance at Eventbrite.

Mexican Film Festival Double Feature
Saturday, November 13, 6 to 10 p.m.
Active Adult Center, 11181 Colorado Boulevard, Thornton
Thornton Arts and Culture slips in one last Día de los Muertos event with a pair of films: Book of Life, an animated movie about Day of the Dead and other cultural traditions of Mexico and Latin America (for ages seven and up); and Macario, a 1960 supernatural tale from Mexico set on Day of the Dead eve that received an Academy Award nomination — the first Mexican film to do so (for ages thirteen and up). The program is free, but register in advance.

I Only Have to Land It Once: A Group Show Dedicated to Skateboarding
Opening reception Saturday, November 13, 7 to 10 p.m.
Black Book Gallery, 3878 South Jason Street, Englewood
Black Book Gallery presents work from thirty artists who encapsulate their skateboarder subculture in myriad mediums. With works by Shepard Fairey, who gained nationwide renown with iconic murals of Andre the Giant, and Luke Ramsey, whose graphics have been featured in the New York Times and Cartoon Network, this is a free-spirited show you won't want to miss. It runs through December 13, but the reception promises to really get things rolling; find out more here.

Do you know of a great free event around town? Send information to [email protected]
KEEP WESTWORD FREE... Since we started Westword, it has been defined as the free, independent voice of Denver, and we'd like to keep it that way. With local media under siege, it's more important than ever for us to rally support behind funding our local journalism. You can help by participating in our "I Support" program, allowing us to keep offering readers access to our incisive coverage of local news, food and culture with no paywalls.
Make a one-time donation today for as little as $1.