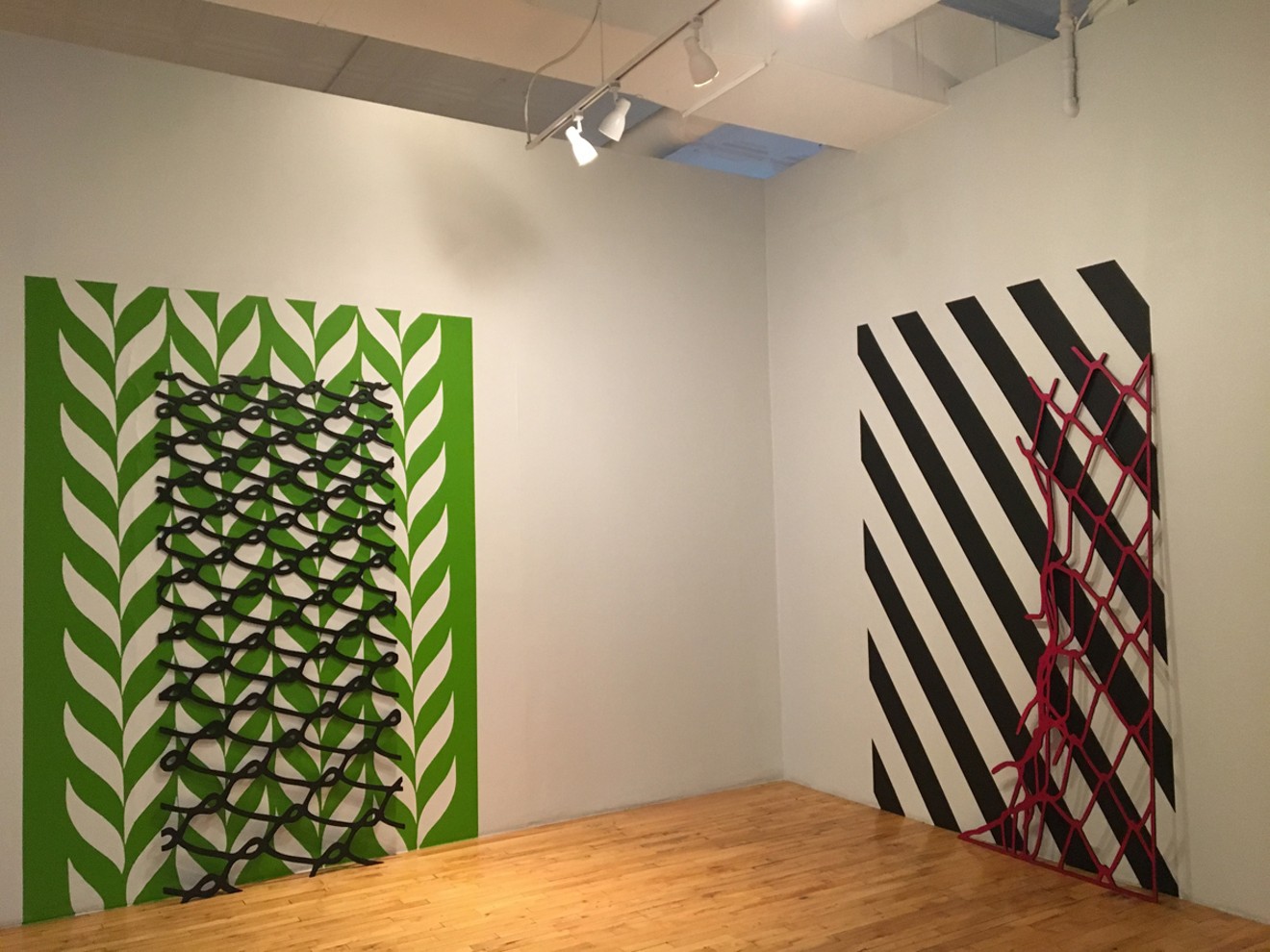 Wall installations by Jaime Carrejo in Espacio Liminal/Liminal Space at the Museo de las Americas. Robert Delaney
Long one of the most important landmarks of the Art District on Santa Fe, the Museo de las Americas is now also one of the most emphatic, with a new coat of paint that puts the “shocking” in shocking pink. The new look outside coincided with the unveiling of the current spring/summer show inside: Espacio Liminal/Liminal Space, a fairly loose group exhibit that focuses on seven young Latinx artists who all live around here, some well-known in the contemporary scene and others just emerging.

The show was put together by Frank Lucero, who is making his curatorial debut with Espacio Liminal/Liminal Space. Lucero made some very reductive decisions in organizing the exhibit; in a brief statement, he puts it in the context of identity, noting that “being Latino is not a singular experience.” He was interested in exploring the transition and transformation that he's observed himself in the community, Lucero explains, with the “liminal space” of the title being that place between one point and the next. This concept of the "in-between" evokes the present-day conflicts on the Mexican border, though only by implication, and, more lightheartedly, the invention of Spanglish. As a result, the show is sort of like seven degrees of assimilation, with each of the artists following his or her own stylistic path.

Lucero asked each of the included artists to create something for this exhibit, which means that everything is new. The artists were also instructed to leave all their pieces untitled; the space by the works includes no didactics, just the artist's name. Lucero says he thinks this makes the show more accessible to a non-art audience, but it can be problematic. Still, Espacio Liminal/Liminal Space gets away with the broad theme and lack of backstory content because it's such a dazzling visual experience.

That begins right at the start with a section devoted to Jaime Carrejo, who grew up in Texas near the Mexican border and now lives in Denver. The initial space is filled with an installation that’s been suspended from the ceiling: a length of ready-made chain-link fence holds a box that resembles a miniature coffin, a morbid allusion underlined by the cut flowers on top of it. This piece is accompanied by wall reliefs for which Carrejo has set laser-cut rubber renditions of fencing lattice directly on top of patterned painted walls. The chain-link and the fencing lattices suggest the idea of separation and the dichotomy of Carrejo's own identity — born and raised in the U.S., but also having Mexican-American ancestry — that's guided his conceptual art practice.

Frank T. Martinez paintings in Espacio Liminal/Liminal Space.
Robert Delaney
In the gallery to the left, Lucero has installed a set of twenty small abstracts bracketed by a pair of major paintings, all by Frank T. Martinez. The Denver artist has exhibited his non-objective paintings for over a decade; in the past few years, he’s embraced an eccentric version of geometric abstraction in which stripes or other patterns are set against, or held in place by, odd shapes that have been defined by thin painted lines. The small paintings here are studies for the large ones, allowing Martinez to work out details and ideas. They're more experimental, as he tries out organic lines and dots, and by the time he gets to the final paintings, he’s reduced everything to straight lines and bars on clearly expressed color fields. They work beautifully with Carrejo’s wall installations.

Opposite the Martinez paintings are a small group of darkly colored, blobby humanoid figures by emerging Colorado artist Jacob Gutierrez. They look to be made of cast metal (but since there’s no information, they could be clay or plaster or something else). In these works, spindly figures with exaggerated feet and hands are caught as though they are moving or even dancing. Stylistically, they seem like a cross between Picasso’s approach and that of Giacometti, and are oddly engaging.

Painting by Diego Rodriguez-Warner in Espacio Liminal/Liminal Space.
Robert Delaney
In the large main gallery, Lucero has split the wall space between Denver artists Sierra Montoya Barela and Diego Rodriguez-Warner, who both contribute paintings, more or less. Barela does a kind of neo-pop in which she puts together meticulously painted hyperrealist elements in unlikely combinations, in the manner of a collage. In one, the pictorial content has been split in half, with a lineup of house plants across the bottom, and a watering can and other supplies on a plywood board above. In another, a wedding picture leans against a wall that has a religious mosaic to the right and a sunburst clock above. Rodriguez-Warner, one of the stars of the show, displays an array of paintings on carved wood that show his incredible skill at blending wood carving and painting is such a way that it’s hard to tell where one starts and the other begins. His abstracted figural shapes are based on various traditions from Asia, Europe and the Americas, and he collapses them into a coherent vision that’s uniquely his own. Even in a strong show like this, his work maintains its considerable power.

Alejandra Abad's solar prints.
Robert Delaney
Back toward the front is the work of two artists who employ photo-based methods. In the niche area just off the main space are solar prints that look like blueprints; these are by Boulder’s Alejandra Abad, and this is her first significant show. She also contributes a video projection that is closely akin in color and sensibility to the prints, with stuffed cushions and bolsters in bone shapes. In the small gallery beyond are altered photos by Denver's George Perez, who cuts, and sometimes even tears, photographic prints. One piece is an oversized portrait of a man that's barely readable as such, assembled from straight-cut photo fragments that don’t correspond to the pictorial elements of the man's face. In another, Perez has hung a grid of sepia-toned photos with their centers crudely ripped out and replaced so that they are essentially blank.

Altered photographic prints by George Perez.
Robert Delaney
Denver saw the flowering of the Chicano art movement in the 1970s, and though none of the artists in Lucero’s Espacio Liminal/Liminal Space are heirs to that magic moment, the Museo, founded in the 1990s, certainly is. That fact alone links the young artists on view there now to their predecessors, who pioneered the idea of making art that came out of their shared cultural identity.

Espacio Liminal/Liminal Space, through August 24, Museo de las Americas, 861 Santa Fe Drive, 303-571-4401, museo.org.
KEEP WESTWORD FREE... Since we started Westword, it has been defined as the free, independent voice of Denver, and we'd like to keep it that way. With local media under siege, it's more important than ever for us to rally support behind funding our local journalism. You can help by participating in our "I Support" program, allowing us to keep offering readers access to our incisive coverage of local news, food and culture with no paywalls.
Make a one-time donation today for as little as $1.