Everybody Dies in Everybody, a Comedy From the Catamounts 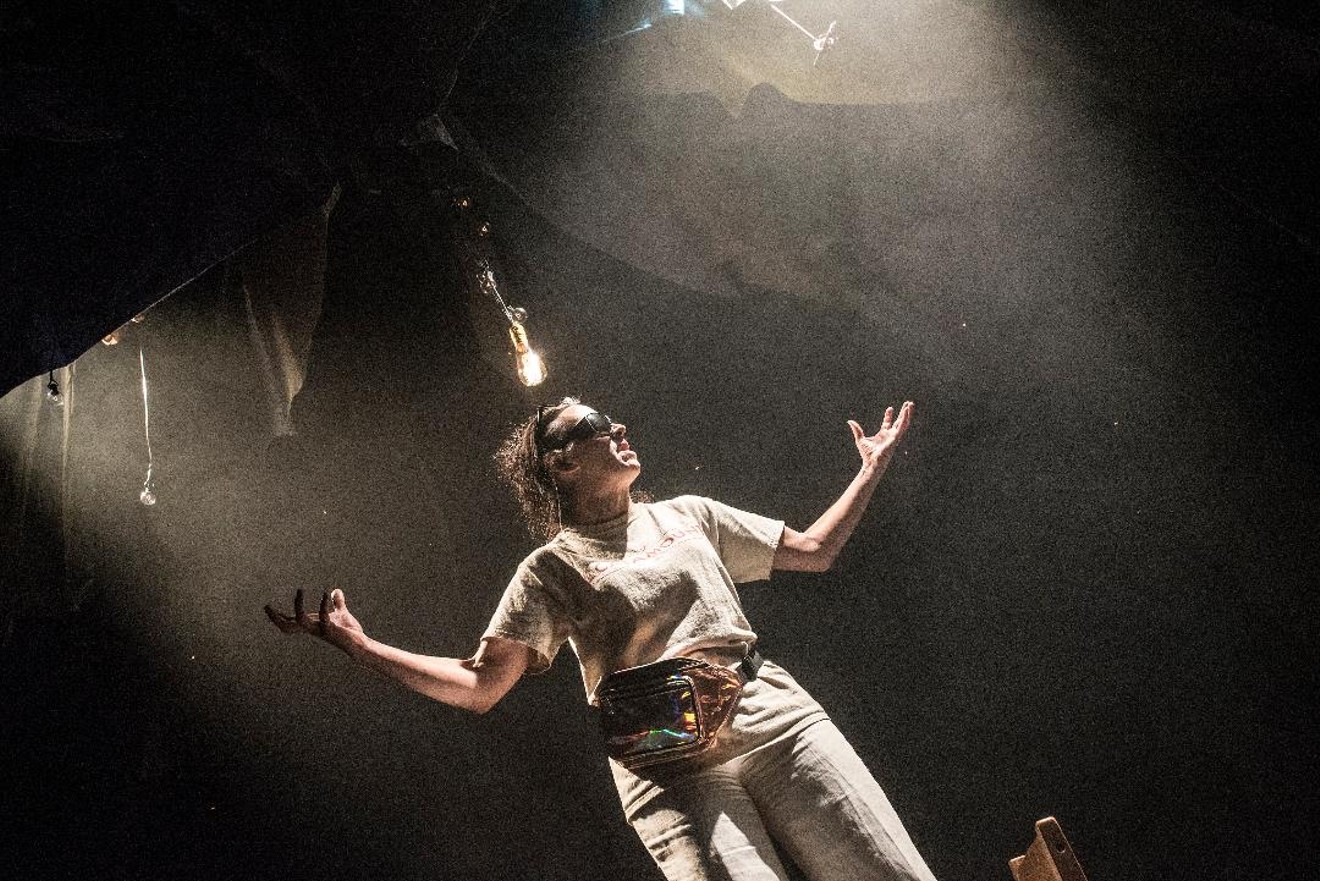 Karen Slack as God in Everybody. Michael Ensminger
In the fifteenth-century morality play Everyman, God summons Everyman — who represents everyone living — to his death, where he will give an account of his life. Terrified, he begs for reprieve, and God allows him a companion on his journey...if he can find one. Because as soon as Friendship, Kindred and Goods learn his destination, they desert him. At the very end, his only companion is Good Deeds — but since he hasn’t really accomplished many of these, Good Deeds is very weak. Though the play is stiffly moralistic, the basic concept still resonates. Who or what will accompany each of us on that lonely final walk? While I’ve always thought that it was fair enough for God to judge Everyman on the goodness that he put out into the world, it wasn’t very compassionate: Surely Everyman’s final companion should be Love.

Apparently playwright Branden Jacobs-Jenkins had a similar thought. We’ve seen his work in the area before, in fine productions of the brilliant plays Appropriate and Gloria at Curious Theatre. Now the Catamounts, ever experimental and daring, have mounted his Everybody, a take on the old morality tale, in a regional premiere.

The setting is evocative: a large, bare space surrounded by chairs, which we’re exhorted not to move. Seated in a large circle, we can watch the audience members opposite us as they view the action; some cast members are seated among us. Colorful fabrics hang from the ceiling, along with various props. Nine actors play all of the roles, some of them interchangeably night by night and picked by chance, so that almost every performer will have to memorize the entire script and each performance will have unique nuances. Director Julie Rada’s interpretation, like the author’s intention, is clear: We are all Everybody, and every one of us will die.

Ilasiea Gray as Love in Everybody.
Michael Ensminger
Jacobs-Jenkins hews fairly closely to the framework laid down by Everyman, though of course he riffs on it, mocks and modernizes it, and changes that ending.  Unlike Everyman, though, this play is a comedy. Characters argue about the nature and even the existence of God, and God herself seems a bit confused. Played by a very funny Karen Slack, at the beginning of the evening she’s working as the Usher, who tells us to silence our devices and provides a little of the original Everyman’s history. Toward the end, she’ll be called on to represent Understanding. The Death she orders into action on the night I saw the play was a nicely tousled Edith Weiss. Family and Friendship are played as fairly farcical folk, and Stuff is downright hilarious. Love, in the person of Ilasiea Gray (who keeps the role throughout, I believe), comes into the theater late, seats herself with unapologetic dignity, gets up after a bit to insert herself into the action, and proceeds to take over. She’s not exactly nurturing, at one point ordering Everybody to take off his clothes and run around the stage to the point of exhaustion; perhaps this is Jacobs-Jenkins’s take on the self-flagellation that Everyman performs to atone for his sins. But domineering or not, it’s Love who remains faithful to the end. Also, Bad Deeds — everything wrong that Everybody has ever done — comes rushing to scramble into the grave with them. I’m not sure why Jacobs-Jenkins makes this substitution, since we know from Shakespeare that “The evil that men do lives after them./ The good is oft interred with their bones.”

I don’t think this Jacobs-Jenkins script is as impressive as those of Gloria and Appropriate. That we're all mortal isn't exactly a revelation, and there are many writers of all kinds who have more memorably explored the fear, nihilism, cynicism and yearning this knowledge brings. But the tech and direction for the production are precise and clever, the acting lively, and the production worth your time.

Still, I do wish some of the scenes were less rapid and shrieky. If you really wanted a quiet moment now and then to absorb the ideas, there wasn’t a chance in hell you’d get it.

Everybody. Presented by the Catamounts through October 12, Dairy Arts Center, 2590 Walnut Street, Boulder, thecatamounts.org.
KEEP WESTWORD FREE... Since we started Westword, it has been defined as the free, independent voice of Denver, and we'd like to keep it that way. With local media under siege, it's more important than ever for us to rally support behind funding our local journalism. You can help by participating in our "I Support" program, allowing us to keep offering readers access to our incisive coverage of local news, food and culture with no paywalls.
Make a one-time donation today for as little as $1.