Life Is Strange
Haven Springs, the setting for Life Is Strange: True Colors, looks like an idyllic picture ripped right out of a Colorado tourism guide, and for good reason: Its developer, Deck Nine Games, is based in Westminster, as are many of the actors behind the characters. True Colors sets out to tell the story of one girl changing her lot in life, but the Colorado backdrop inspires much of the narrative.

The first Life Is Strange game was created in 2015 by French developer Dontnod; Deck Nine was brought on to develop a prequel to the series: Life Is Strange: Before the Storm. Deck Nine got its start as Idol Minds, founded in Boulder in 1997 by Mark Lyons and Scott Atkins, who'd both previously worked for Sony Interactive Studios America. The studio has a long history of video game development but rebranded as Deck Nine Games when it began focusing on narrative-driven adventures in 2017, the year that Before the Storm was released. The release of Life Is Strange: True Colors last month marks the first time Deck Nine has developed a mainline entry in the franchise.

True Colors follows Alex Chen as she travels to Haven Springs, Colorado, to reunite with her long-lost brother. In all Life Is Strange games, the main character has a kind of superpower; Alex has the ability to read and influence other people’s emotions, which plays into her growing relationship with the close-knit community of Haven Springs.

“We tried to infuse our game with as much Colorado flavor as we could," says Jonathan Zimmerman, narrative director of True Colors. "I think the reason why a small town attracted us is, honestly, it was a scopeable community for us to tell a story about. We wanted Alex to be able to affect the world around her, and if the world was New York City, that’d be a very different story; it’d be very difficult to tell. But in a place like Haven, one person really can make a big difference.”


The actress behind Alex, Erika Mori, is from Denver; the actor who plays her brother, Gabe, is Han Soto, who's from Boulder. As part of their research for the game, the pair traveled to various nearby mountain towns including Black Hawk, because Han wanted to “be a sinner and go gambling,” Mori says. A tour of the Argo Mill and Tunnel in Idaho Springs also inspired some of the design and narrative direction of True Colors.

“I think that’s something that really inspires us about Colorado, that inspires us particularly about the small mountain towns of Colorado. You might have an idea in your head of it all being homogenous and it all being one unified flavor, and there are these unifying elements to it, but the people that come there come from all walks of life,” says Zimmerman. “At its best, these communities can be some of the most inclusive communities out there, and we wanted to honor that and honor just what we love about being parts of those communities in Colorado,”

Developing a video game is a years-long project, and because Life Is Strange is so focused on character, elements of the actors' personalities can start to seep in as well. Mori quickly found that she had a lot in common with the way Alex was written, and that only increased with time.

"When I first got on set, the Alex I auditioned for was much more guarded, much more brittle and bitter. Had a bite to her," Mori recalls. "And as we worked with this character and her relationships with her brother and the other people in the town, there certainly was a softening that occurred. But that didn’t necessarily take away from the steel of her core. I think it was important that she become a character that people want to root for, and who wouldn’t push away the people in the town who she was trying to meet. I know that the writers did start writing for me like they started writing for Han as they got to know us as performers and as humans way better. So it just made our jobs like a thousand times easier.” 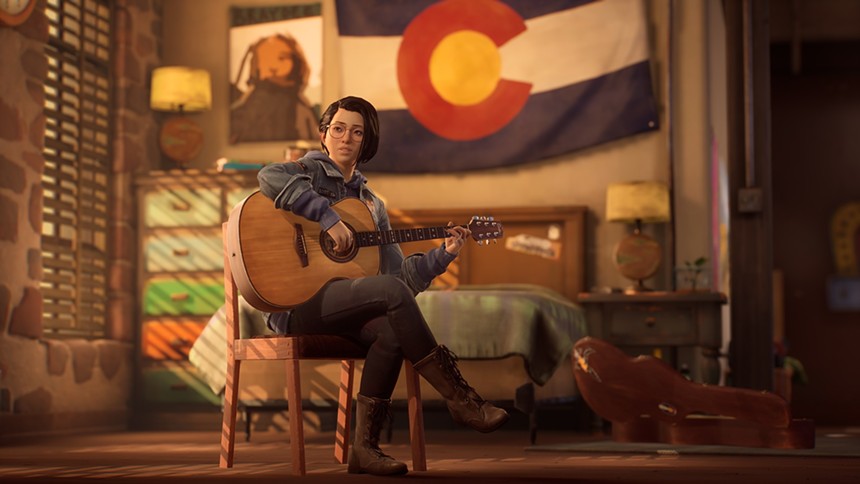 Life Is Strange
The Life Is Strange series often diverges from the typical idea of a video game, since it’s more concerned with telling a deeply personal story than providing some kind of intense gameplay experience. That's a concept baked into the philosophy that Deck Nine used in designing True Colors, which feels like an even more personal story than past games in the franchise. Alex and Gabe grew up in the foster-care system, and shortly after their long-awaited reunion, Gabe dies in a tragic accident. Soto went to juvenile detention himself when he was younger, which helped him add an extra element to his performance.

“I feel like what we did recognize early on was that we did want to make it a story about one person’s ability to forge a life for herself, despite everything in the world trying to make that impossible. I think what we became really enamored with were the seemingly little victories in that, that actually mean the world to Alex,” Zimmerman explains. “So, like Alex having a home, we wanted that to feel like it was massively impactful to the player. And Alex just kind of forging the relationships that she does, each person she becomes close with, that she opens herself up to, that she lets in, because of how difficult it is to let anyone in and what it means to her. We wanted those to feel like major victories. So I guess you could say we took a macro lens and zoomed in really close on seemingly small things, and we tried to show how huge they were for her.”

At its core, Life Is Strange is a game about the human experience, with Colorado at the heart of the process.

“I would set all of our games in Colorado," Zimmerman says, then adds, "If it's a Martian terraforming story, it might be hard. There’s something really special about getting to speak to our home and this place that we love. I came to Colorado as a transplant — I think so many of us did — and we all kind of found this thing we were looking for, whether that’s in Deck Nine or in other elements of our lives and finding our roots and forming families.

"There’s a kind of ‘Head west, young man’ ethos to people coming together in this place and forging lives together, communities, and I think that will remain in the DNA of Deck Nine as a studio," he concludes. "Maybe it won’t be in every story we get to tell, but I think as long as it’s a part of who we are, then I can imagine it infusing stories for as long as we get to keep making them.”
KEEP WESTWORD FREE... Since we started Westword, it has been defined as the free, independent voice of Denver, and we'd like to keep it that way. With local media under siege, it's more important than ever for us to rally support behind funding our local journalism. You can help by participating in our "I Support" program, allowing us to keep offering readers access to our incisive coverage of local news, food and culture with no paywalls.
Make a one-time donation today for as little as $1.