Apartment 212: A Horror Film Shot in a RiNo Warehouse 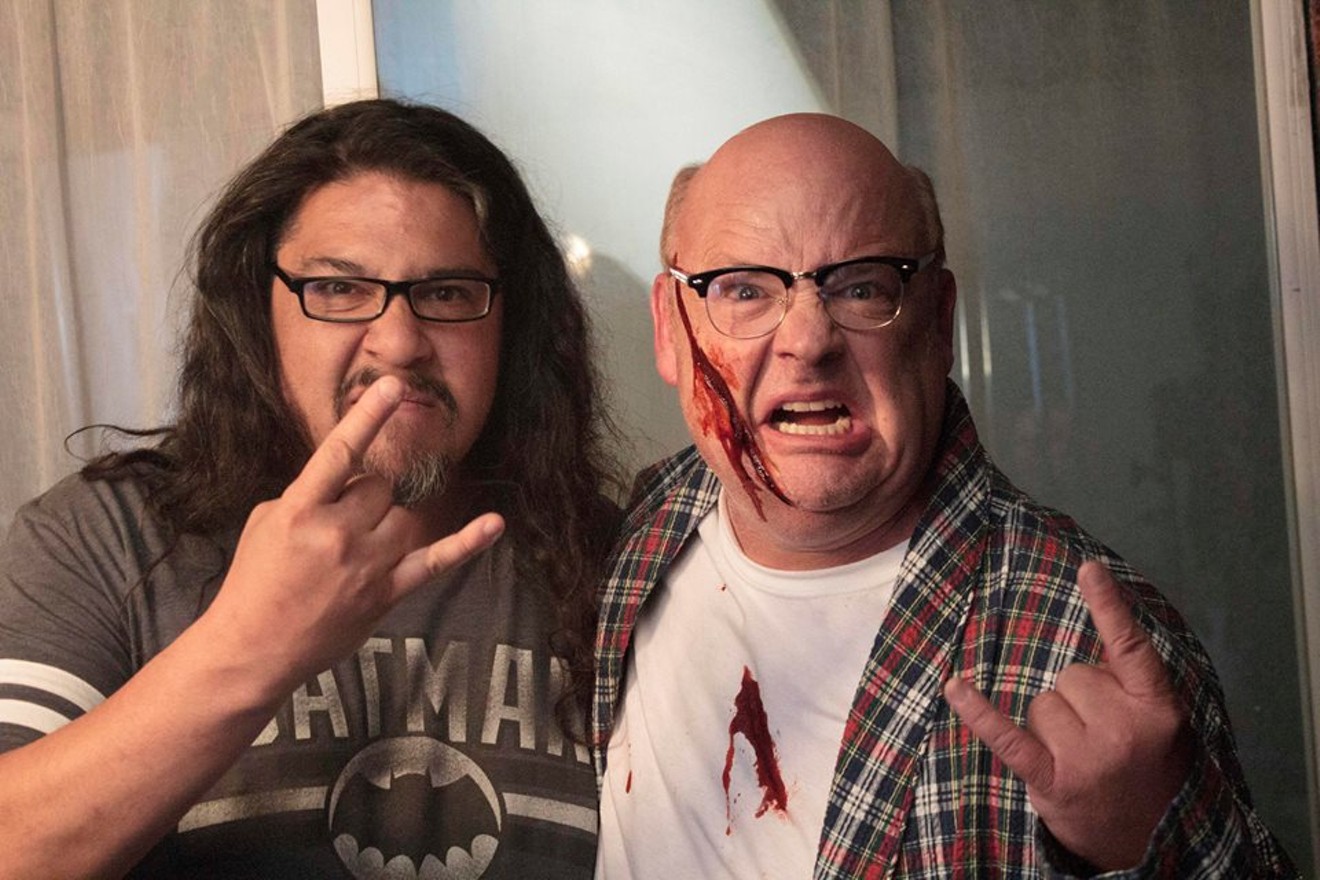 Local filmmaker Haylar Garcia (left) and actor Kyle Gass on set for Apartment 212, a horror film shot in Denver. James Dimagiba
Denver filmmaker Haylar Garcia shot horror film Apartment 212 at an industrial space in the RiNo neighborhood. The film was a hit last year on the horror-film-festival circuit and secured distribution with Gravitas Ventures. On Friday, March 16, the movie will be shown in theaters in ten cities including Chicago, Los Angeles and, of course, Denver; it will also be available through video-on-demand and iTunes.

The film tells the story of a young woman who moves into a new apartment after leaving an abusive relationship, only to wake up and discover mysterious bites all over her skin. Comedic actor Kyle Gass, known for the role of Eugene in "Elf," plays her next-door neighbor.

We spoke with Garcia and Gass about their experience creating Apartment 212.

Westword: Haylar, will you tell me about how you got started making films in Colorado and what drew you to horror?

Haylar Garcia: I used to be a musician for many years. Then I made the transition to film because it seemed like another way to tell stories that had a good challenge to it. So I kind of gravitated toward that, and I spent a long time getting there. I don’t specifically only do horror; I have for the last two films because it’s easier to get funded. It has a good commercial outlet, and so it’s a good way to make movies and get people to invest in them, because they have a little bit better of a return rate.

Kyle, you’re a musician too, correct? Was that how you got involved in the movie — a musical link?

Garcia: I’m glad I did, too, despite the restraining order.

Gass: It was weird. Haylar gave me his demos the first day of shooting: “Can you help me out?”

Garcia: Could you help out a brother with a music career? I tried to pull the musician card, for sure.


But how did you get cast in the film?

Gass: Haylar sent me an email and I think the script. Yeah, it was standard with an agent and a script. If I get an offer, I’m likely to do it.

Garcia: He refuses to audition.

Gass: That’s right. I wish I did, but unfortunately…

Garcia: [Laughs] Yeah, we reached out to Kyle. I think he was touring at the time, so it took a little while. But once he was off-tour and we talked about the script, we were very happy to learn that he was going to agree to the movie. We were super-happy.

Kyle, have you done horror films before, or not really?

Gass: You know, I don’t think I have. I actually did a small bit in Idle Hands a while ago. Does that count? And then they kicked me out. Like, "Wow, I’m not good enough to be in this mediocre film?" [Laughs] It was one of the worst films. I was cut out of Dumb and Dumber, the first sequel without the stars. And I was like, “Wait a minute. I think this is one of the worst movies ever made, and my scene got cut.” Maybe that was part of the problem, but enough about me.

Will you tell me about the inspiration behind the film and what went into making it?

Garcia: Even when we do horror, we like to do something that has a social message as well. Because we always feel like good horror, that stuff that sort of lives on no matter what the budget, the stuff that lives on within the horror cultures [leans] toward social stuff. We always strive to do that. That’s what we wanted to do in this one specifically, with not only the surface topic of domestic violence, but also just the idea that all of us have things that eat at us if we don’t face them. They take us apart a piece at a time. So we thought it was really important to do that. ... The making of [the movie] was a whole other animal. We were just really lucky to have such a great cast, people like Kyle, Sally Kirkland, Penelope [Mitchell] and Chris Johnson. They all brought the movie to a level that is hard to achieve, and it’s not something that you can just do all the time in smaller markets like Denver. We got lucky to get that together. We also had a really good local cast. But it was that combination of having a small, manageable film with some really awesome talent. It was kind of a cool sweet spot.

Garcia: I call them deficits; I wouldn’t necessarily call them weaknesses. We have great crews here. We have film investors. We have all of the ingredients. It's just that we don't have ongoing industry. The film commission has done a really good job with the incentives. It would be nice if all the politics went away and we could get a little more incentive money for both out-of-state and in-state films. But to tell you the truth, the only deficit that Colorado has is that we’re just lacking industry. Other than that, all the ingredients are here, and you can always bring people from out of state, like Kyle, to do stuff. So that's the only thing I see.

Gass: That’s probably why it’s not called Denver-wood. It’s a little off the charts.

Kyle, as an actor, was there anything specific that you enjoyed about this role or the film that was a different experience?

Gass: Well, I was cast as kind of an outsider, a kind of loser-ish sort of frumpy guy. I guess that’s how I appear, so it was right in my wheelhouse. I felt a kinship with him right away. I liked him right off. It was a fun part.

Garcia: Kyle tends to be a little bit low-key when it comes to how well he did in this movie. There is the surface of what he talked about with that character, but there’s so much more going on about the character. I won’t go into it and ruin it, but Kyle knocked it out of the park.

Garcia: Kyle, although mostly known for being a funny guy and a great musician, has pretty awesome acting chops in this movie. Because without what he brings out on the drama side, there is nothing to juxtapose that sort of shlumpy character from next door who turns out to be super-lovable...

Garcia: The part where you [chase] everybody with a chainsaw? That part? Oh, shit.