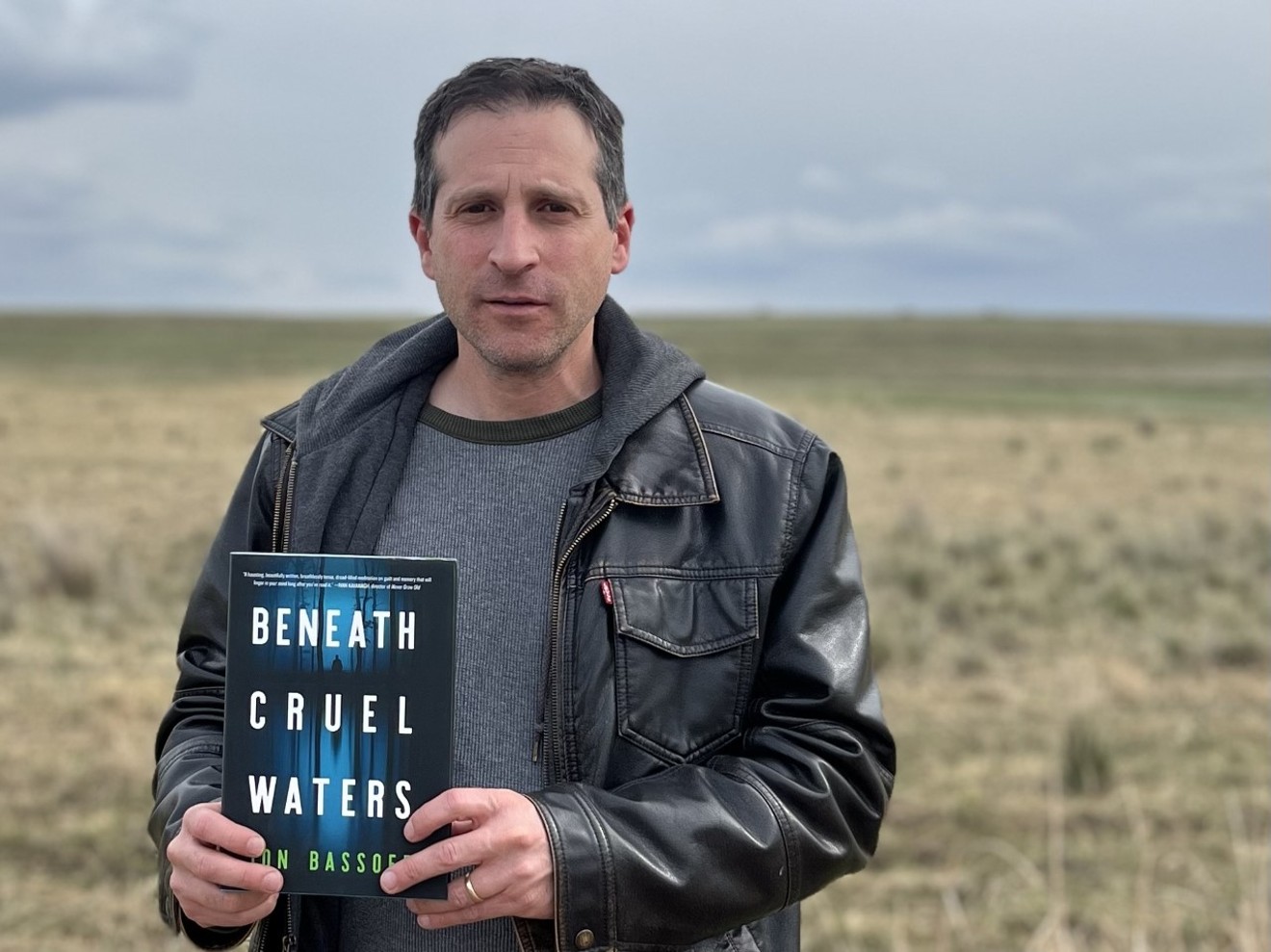 Jon Bassoff, with his latest novel, in the Colorado plains. Jon Bassoff
Colorado author Jon Bassoff's new novel, Beneath Cruel Waters, bears similarities to the classic eastern plains novels of the late Kent Haruf. But Bassof says it's a coincidence that his protagonist shares the name of the town thst Haruf wrote about, Holt. “I love those books,” says Bassoff. “Maybe it was some psychological piece that got stuck in my head, but it wasn’t a purposeful call-out. Looking back, though, there’s a nice connection there. One I don’t mind at all.”

The press from Blackstone Publishing calls the book "nouveau-noir Americana." Bassoff says he isn't sure what genre he'd label it, but he recognizes the noir elements.

“My roots are in noir,” he says. “A lot of my early stuff was written from the point of view of sociopaths and psychopaths, but it still had a lot of that noir aesthetic from the films of the 1940s. There’s a lot of that in this book, as well. I’m influenced by the Southern Gothic writers, so even though it takes place in Colorado…I still had the ghost of Flannery O’Connor floating around my head.”

Blackstone
The setting is as much a character in Bassoff’s new suspense thriller as the people who inhabit it, both in the present and — most hauntingly — the past. “When most people think of Colorado, they think of skiing or the mountains," Bassoff says. "But there’s that whole other half of the state out east. For a book like this, that sense of openness and loneliness and isolation fits well [with] the family dynamics I was writing about.”

Bassoff, who also teaches high school English in Longmont, says he drew inspiration from that town to build his fictional Thompsonville. “I imagine it being farther east, on the plains," he explains. "Maybe it’s more like Longmont from thirty years ago, but there’s some name-drops of places in town. In a lot of ways, I’ve romanticized some of these places — the seedy bars, the small-town hurt and the neighborhood with dilapidated houses falling apart. That’s what does it for me.”

The book is told in the third person, which is something of a departure for Bassoff, as well. “I wrote a lot in the first person with my earlier books,” says Bassoff. “You as the author know what’s going on, and you’re deciding what to keep from the reader. With this book, it was more of a challenge. What do my characters know? What do my characters not want other characters to know? What do I as the author want my readers to know, and when and how should they know it? The book has a couple of reveals, and I didn’t want them to be like a Sixth Sense kind of thing, where I pull back the curtain. ...  It’s the fine balance between doing a cheap trick and being fair with the readers.”

Beneath Cruel Waters is, at its core, a coming-home story. But this homecoming isn’t welcoming: There’s no dinner on the table, no pie being baked, no smiles, hugs and handshakes. There are unlit porch lights, things found under floorboards, questions, longing and buried memory. “When you’ve got a coming-home story,” says Bassoff, “you know it’s going to be about the past. There’s no other way around it. But you have to make it about experiencing the past in the present. I grew up in Boulder, and I used to go back and just drive around the old neighborhood. I don’t know what I was looking for, really. In some ways I think I wanted to go back in time and fix things, fix mistakes.”

Bassoff says that’s what he sees his novel's protagonist doing: trying to go back home to recognize and rectify old trauma.

Don’t think for a moment, though, that Beneath Cruel Waters is too much a departure for Bassoff fans. “This book’s a little bit different than the stuff I’ve written in the past,” admits Bassoff. “I’ve learned to step off the gas a little bit. I wanted this novel to be a little more subtle. Dark, but a little less weird.” He claims this exodus was by design as well as the way that the story needed to be told.

“I wanted to try writing to a wider audience, sure. I wanted to try something new," he says. "But this still has all the hallmarks of a Bassoff book. Religious extremism. Violence. Mental illness. All the things that make America great.”

Jon Bassoff’s novel Beneath Cruel Waters is available now at your favorite booksellers.
KEEP WESTWORD FREE... Since we started Westword, it has been defined as the free, independent voice of Denver, and we'd like to keep it that way. With local media under siege, it's more important than ever for us to rally support behind funding our local journalism. You can help by participating in our "I Support" program, allowing us to keep offering readers access to our incisive coverage of local news, food and culture with no paywalls.
Make a one-time donation today for as little as $1.