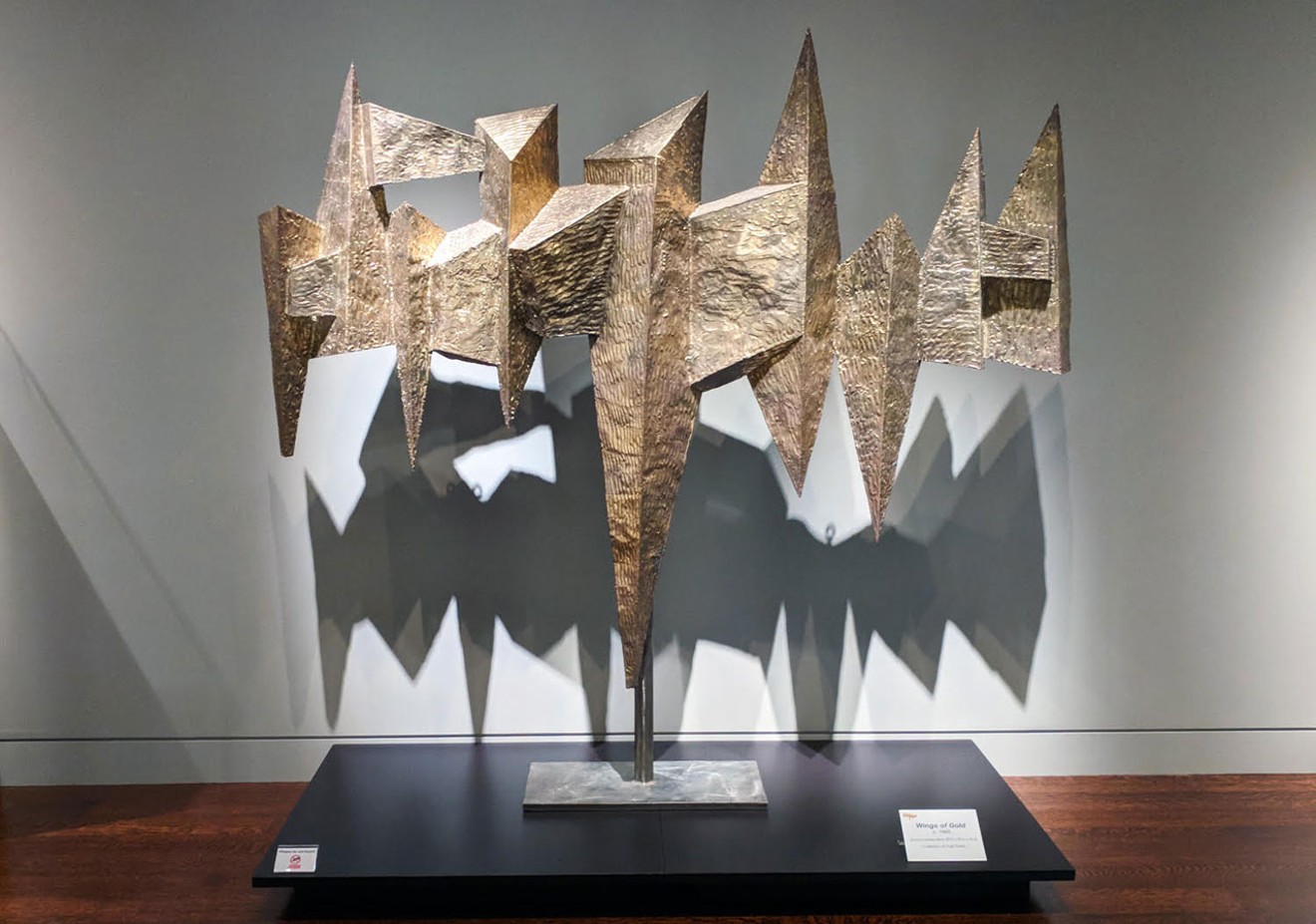 The Kirkland show, on view in the museum’s gallery for temporary exhibits, has the epic title Welded & Fabricated Poetry: The Artistic Life of Elizabeth Yanish Shwayder; it was curated by museum founder Hugh Grant and deputy curator Christopher Herron. The Kirkland focuses not only on Colorado art, but also on international design, and in a clever move, Grant made the call to use minimally detailed modernist furniture in lieu of sculpture stands. It may sound odd, but it works with Shwayder’s taste for gold bronze and dull aluminum, contrasting nicely with the mellow tones of the mostly wooden furniture.

Shwayder, who is in her nineties, says she’s been interested in art-making since she was a small child, and began painting seriously in the 1950s (though none of her early paintings are in the show). She tried her hand at a number of mediums before landing on sculpture in the early 1960s, taking both formal and informal lessons from several top local talents, including Wilbert Verhelst and Edgar Britton. From the start, her sculpture was abstract, and she recalls urging Britton to embrace abstraction and move away from figuration — which he did for a while. Herron designed the Shwayder show so that it’s essentially chronological, starting on the left and going clockwise around the room. This allows the viewer to follow Shwayder’s stylistic development, though her signature formal vocabulary was almost completely laid out from the start.
Shwayder’s classic pieces, which date from the ’60s and ’70s, fall into two distinct categories: airy constructions of rods, and solid, sometimes triangulated shapes. Exemplifying the first type is “Extroverted Tower,” with a multiplicity of thin rods creating a vertical spire of skeletal bars in vaguely geometric arrangements.
Representing the second is “Bronze Crystals,” three quasi-geometric shapes with their inverted pyramidal points resting on a rough-cut block; the entire composition was done in cut and welded steel plates, then covered in gold bronze.

There’s a direct line from “Bronze Crystals” to what is arguably Shwayder’s masterpiece, “Wings of Gold,” also made of bronze-coated steel. The inspiration for this piece was the winged insignia on her son’s Navy pilot uniform; it comprises a horizontal row of wedges held aloft on a partly hidden spike. Along with the full-sized sculpture, the show includes a gorgeous, cast-bronze maquette of “Wings of Gold.” (A variation was also created for the BMH Synagogue.)

Over the years, Shwayder also worked with welded copper and cast paper, among other things. Some of her sculptures are completely non-objective, while others, including several metal parodies of cactuses, are abstracted out of the recognizable world. Examples of just about every type of work she did are included in the fifty pieces in this show — the largest ever dedicated to Shwayder’s oeuvre, and a can’t-miss exhibit.

Installation view of Robert Mangold’s “PTTSAAES” sculptures at Michael Warren Contemporary.
Courtesy of Michael Warren Contemporary
The Mangold sculpture mounted on the facade of the Kirkland is a smart segue to a second can’t-miss solo, PTTSAAES: Works by Robert Mangold at Michael Warren Contemporary on Santa Fe Drive. Mangold, who is in his eighties, moved to the Mile High City around 1960 to teach at the University of Denver, where Vance Kirkland was also teaching. (In the local art world, there are maybe only three, not six, degrees of separation.) He left DU in 1964, and the following year, he joined the faculty of the then-nascent Metropolitan State College, establishing the art department there.

Mangold’s most readily recognizable sculptures are his “Anemotive Kinetic” whirligigs. The Anemotives are made of colored scoops on wire arms that take on overall spherical shapes and twirl as the wind catches them. But his pieces were always about movement, whether the sculptures actually moved or simply evoked movement while static. The latter type are on display at Michael Warren. All from the “PTTSAAES” — Point Traveling Through Space At An Erratic Speed — series that he’s been working on for several years. Using tubular steel or tubular stainless steel, Mangold cuts and welds the metal in imaginary representations of the trajectory of particles traveling through space. The steel ones are powder-coated in different colors; the stainless-steel ones are scratched and polished. The tubes zig, zag and reverse on one another, suggesting to the viewer that these fantasy particles are running into phantom obstacles that cause them to change course repeatedly. Some, like the wall reliefs, evoke bolts of horizontal lightning; the floor pieces are more like tents.
Mangold is very committed to the idea of a particle traveling unimpeded through space — and two pairs of bas reliefs, mirror images of one another and meant to be mounted on either side of a single wall, clearly lay that out. In each of them, Mangold creates the illusion that the point is so insubstantial, it can pass through solid matter.

One grouping in the show is a miniature suite representing a gigantic piece that Mangold had proposed for Burns Park a few years ago that was never built. Mangold had created one of the original sculptures installed there for 1968’s Denver Sculpture Symposium, but sadly, it was demolished in the ’70s after he complained to the Denver parks department about how badly it had been maintained.

Though there are no monumental “PTTSAAES” sculptures in Burns Park — or at Michael Warren, for that matter — you can see four of them along Fiddler’s Green Circle near the intersection of Arapahoe Road and Greenwood Plaza Boulevard. That group is on view through the spring as part of the Museum of Outdoor Arts Sculpture on the Green program, and definitely worth a drive after you catch both the Shwayder show at the Kirkland and the Mangold exhibit at Michael Warren.

PTTSAAES: Works by Robert Mangold, through October 13, Michael Warren Contemporary, 760 Santa Fe Drive, 303-635-6255, michaelwarrencontemporary.com.
KEEP WESTWORD FREE... Since we started Westword, it has been defined as the free, independent voice of Denver, and we'd like to keep it that way. With local media under siege, it's more important than ever for us to rally support behind funding our local journalism. You can help by participating in our "I Support" program, allowing us to keep offering readers access to our incisive coverage of local news, food and culture with no paywalls.
Make a one-time donation today for as little as $1.