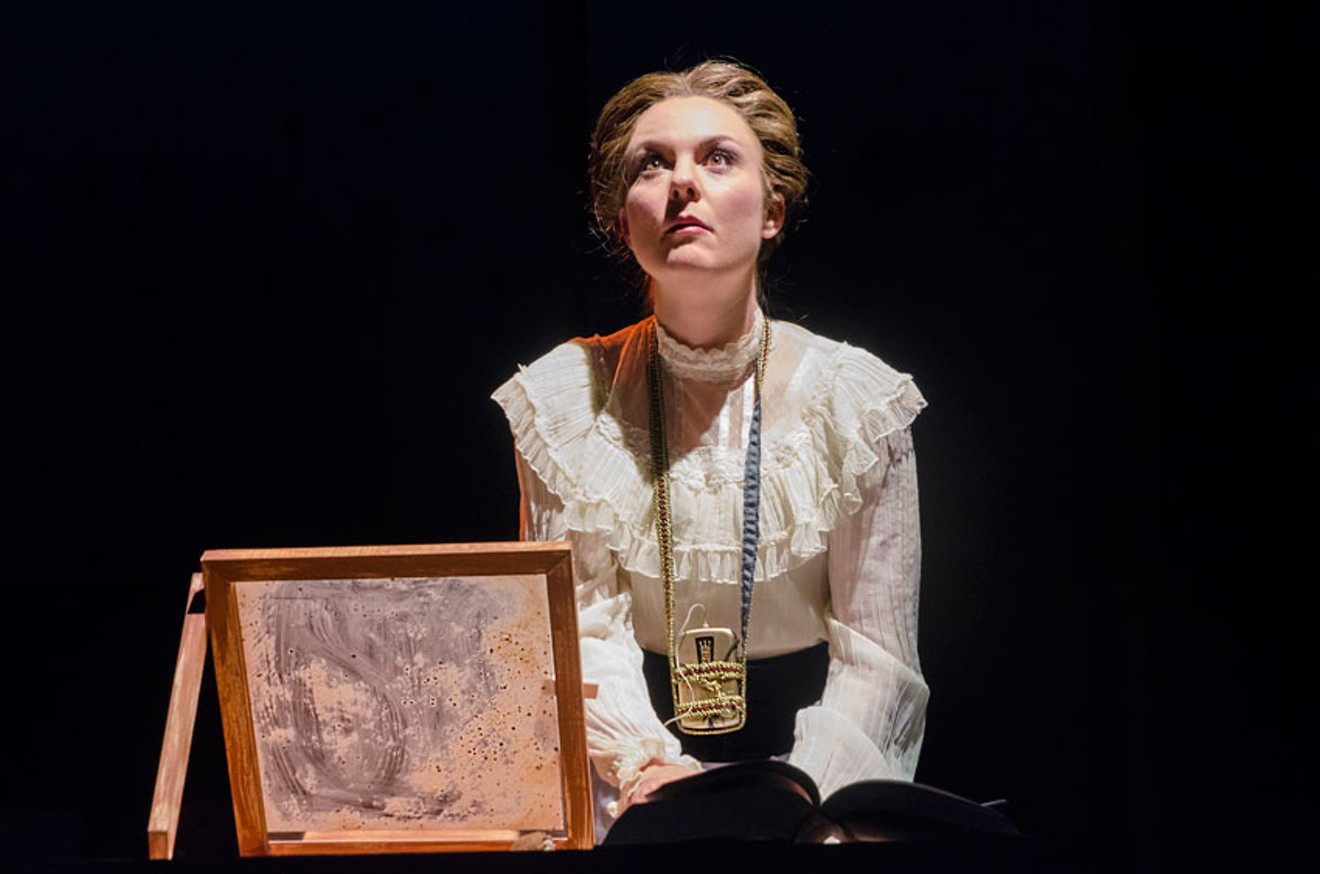 Anastasia Davidson in Silent Sky. Michael Ensminger
The infuriating invisibility of women’s accomplishments through history, the way women’s work was claimed by men or enabled men’s work without the women ever receiving recognition — this is one of the most potent themes of the feminist movement. When Virginia Woolf wrote an essay about what would have happened had Shakespeare had an equally talented sister, here was the answer: We’d never have heard of her and she’d have committed suicide. Not many people have heard of composer Robert Schumann’s talented musician wife, Clara. And women in science have been particularly slighted.

Playwright Lauren Gunderson, whose publicity continually reminds us that she is one of the most produced playwrights in the country (and is certainly one of the most produced around here) is rescuing one such woman — the scientist Henrietta Leavitt — from obscurity in Silent Sky, currently being staged by the Boulder Ensemble Theatre Company, with Anastasia Davidson in the lead. Leavitt, in fact, was considered for a Nobel Prize in 1924, but the idea was dropped when the committee realized she had died three years earlier.

Gunderson is an uneven playwright. We saw her slight but funny The Taming last September, when it was staged by the Catamounts, and her genuinely brilliant and exciting Book of Will — which dramatizes the way Shakespeare’s plays were preserved in print only through the persistence of two of his actors — at the Denver Center in January. In Silent Sky, we learn that Leavitt was one of the “women computers” who worked at the Harvard College Observatory collecting data on the stars. Her contribution was to notice the variable brightness of stars, to realize that brightness could be related to size — and knowing a star’s size would enable astronomers to calculate its distance from Earth. In a sense, she showed us where we were in space, and that space was infinite. At least that’s how I understand it. Here’s a more precise explanation from famousscientists.org: “She found that a certain type of star, the Cepheid variable, pulses at a rate that’s related to its brightness. A Cepheid variable star’s pulse rate reveals the star’s true, fundamental brightness: the amount by which the star’s brightness is dimmed by distance allows that distance to be calculated.”

Leavitt seems to have been a rather reserved and silent woman. Her father was a minister, and she had several siblings, one of whom, Margaret, appears in the play. She studied mathematics and astronomy at Radcliffe, suffered deafness — hence the play’s title — and died of cancer at the age of 53. Gunderson is obliged to flesh out her character and imagine her life, including her relationship with Margaret (given a sympathetic performance here by Rachel Turner), and her interactions with the two other women at the lab — Annie Cannon (portrayed by Karen Lamoureaux with as much expressiveness as the role allows), who made significant discoveries of her own, and the Scotswoman Williamina Fleming (a very funny Leslie O’Carroll), who began her career as a maid in the home of observatory director Edward C. Pickering, perhaps an indication of how little the women’s work was valued. Gunderson also creates a purely fictional character, Peter Shaw, who begins as the butt of the women’s mockery and ends up being Leavitt’s love interest. Austin Terrell handles the transformation with dignity. That mockery, incidentally, provides some of the play’s funniest moments. “At present, we’re cleaning up the universe for men and making fun of them behind their backs,” says Williamina. “It’s worked for centuries.”

There’s very little dramatic invention here, however. The narrative is flat, and the characters rarely feel real. The dialogue sometimes flashes into humorous or idiosyncratic life, but the rapturous talk of beauty, mystery and wonder feels ungrounded, because we don’t get the gritty underpinnings — and it doesn’t help that Davidson is cast against type, coming across more as an ingenue than a serious and brilliant woman. Science can be a hard grind, but these women never suffer backaches, snap at each other or become jealous; this being a feminist play, they’re constantly affectionate and mutually supportive. Silent Sky deals with an important topic, and I can imagine its usefulness in the classroom. But it feels more like a young-adult novel than a living dramatic work.