Local Author Scott Carney May Like the Cold, but His Book Sales Are Hot 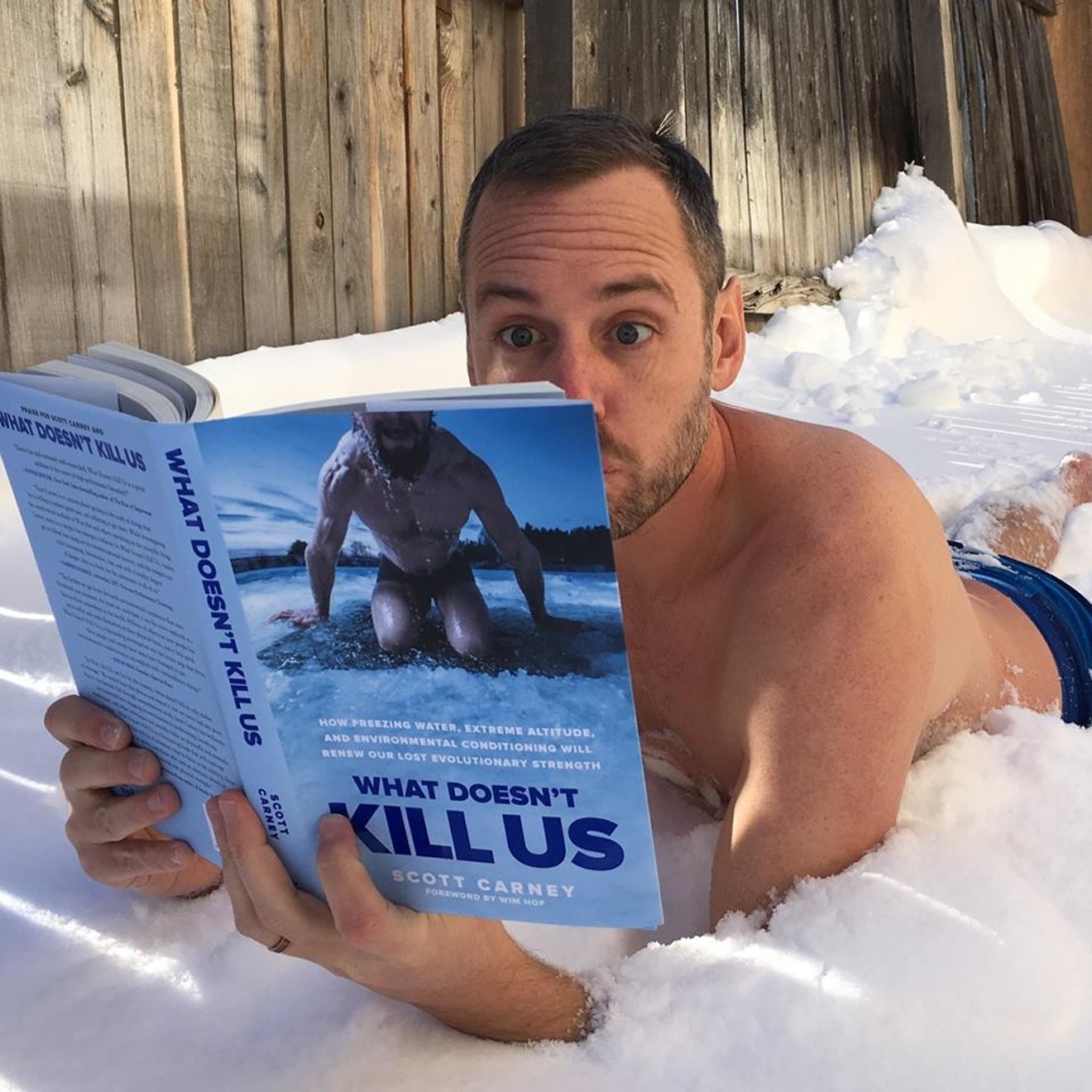 The author in the snow outside his Denver home. Courtesy of Scott Carney.
Denver-based journalist Scott Carney knows that his neighbors – as well as members of Denver City Council – think he's crazy. They're not entirely without reason; on freezing days, Carney goes on runs wearing nothing but shorts, shoes and gloves. He wears the same thing when he's shoveling snow outside his home in the Regis neighborhood. And when he sent an e-mail to Denver City Council members asking for permission to do a polar plunge in any of the city's lakes or streams, he was flatly denied on the grounds that it was too dangerous. Even by Colorado standards, Carney seems to go out of his way to make himself really, masochistically cold.

But there is a method to his madness: the Wim Hof Method, to be exact.

For nearly three years, Carney studied the techniques and health benefits touted by Dutch fitness guru Wim Hof, who goes by the nickname "the Iceman.” Hof is something of an international celebrity, having achieved all sorts of incredible athletic feats in extreme, frigid conditions, from climbing most of Mt. Everest (up to 22,000 feet) in spandex and hiking boots to standing nearly two hours submerged in ice. Wim Hof, aka "the Iceman."
Courtesy of Scott Carney.
Of particular interest to Carney were Hof's claims that his regimen of breathing exercises, meditation and exposure to cold can increase overall fitness and, in some cases, cure serious illness.

That's because Carney originally suspected that Hof was a charlatan. In 2013, he traveled to a training retreat in Poland to meet the Iceman and expose his deceptions. But as he later chronicled in an article for Playboy, he was surprised to find that the Wim Hof Method demonstrably improved his own strength and endurance.

"To go into something so critical and realize, 'Wow, this works,' I knew I needed to write a book," recalls Carney.

On January 3 this year, that book was released by Rodale. Titled What Doesn't Kill Us: How Freezing Water, Extreme Altitude and Environmental Conditioning Will Renew Our Lost Evolutionary Strength, it is already proving to be a runaway hit, in its fourth printing and maintaining an impressive spot in Amazon's top 700 books nearly a month after its release.

The local author says that he's been overwhelmed by the book's success. "What's really heartening is that I'm getting messages from people [around the world] who not only read the book, but say they're now jumping in their pools in the middle of winter or taking cold showers," says Carney.

Readers willingly exposing their bodies to short bursts of cold means that they are subscribing to Carney's message.

"The point of the book is to reintroduce changes in your daily life that simulate what our ancestors learned,” he says. “The core message is that comfort and a desire for the environment to supply all of our needs factors out our body's ability to adapt, which is an essential human trait."

Now, Carney hopes that interest in the subject will spur on more scientific research, especially building upon isolated but promising case studies that suggest that regular exposure to stimuli like extreme cold can help with serious conditions like rheumatoid arthritis and Parkinson's disease.

And while Hof plays prominently in the book and supplied the foreword for it, Carney does not play personal publicist. The journalist acknowledges that Hof's “method” incorporates techniques that are practiced by endurance athletes around the world, even if they haven't marketed them as successfully as Hof has.

Carney interviews some of these other practitioners, including surfing legend Laird Hamilton.

Laird Hamilton doing underwater training.
Courtesy of Scott Carney.
“[Wim Hof] is a prophet and a madman,” says Carney. “On one hand, [he's] incredibly inspiring and has proven that humans have this resilience that we don't think that we have.... However, he's also a train wreck of an individual. He struggled with alcoholism for years. He's a smoker. Whatever people have read about his diet, they're wrong. It's just random, like rolling the dice in the refrigerator. Once I saw him eat a jar of pickled clams and mayonnaise. It was fucking out there."

"But I think that if we realize that [Hof] has failings, in some ways it makes his teachings more valuable,” Carney adds. “Because if even someone as weird, crazy and off-the-rails as he is can do these things, then so can you."

Case in point: the author himself.

Carney never anticipated that, in the course of his training, someone like him could develop the physical and mental fortitude to climb shirtless to just below the summit of Mt. Kilimanjaro – a feat he accomplished while researching the book. See footage of it in the trailer below.


"I don't have a great gym habit. I'm not an endurance runner. I basically shouldn't even be allowed to live in Colorado,” he says with a laugh.

And while Carney admits that it's still difficult for him to turn the knob from hot to cold in his shower, he recognizes the benefits of some momentary discomfort.

“I think more people will do these things," he says.

Carney has a number of upcoming events along Colorado's Front Range. Tonight, Tuesday January 31, you can catch him at a book signing and reading at the Boulder Book Store, at 1107 Pearl Street in Boulder.

Carney is also starting a Wim Hof Method breathing, yoga and meditation group that will meet regularly in the Denver area. That group can be found on Facebook. Its first gathering will be a polar plunge in Boulder Creek ahead of tonight's signing at the Boulder Book Store.