The Holiday Theater: lit up and ready to welcome Denver again. Nikki A. Rae
The Holiday Theater is getting a new lease on life. A long-term lease, specifically, at below-market rates, to support its newest tenant: Denver's Museum of Contemporary Art, which kicks off its official residency in the historic Northside cinema space with an opening party on Thursday, April 7.

The 400-seat venue on West 32nd Avenue was dubbed The Egyptian when it opened in 1926, reflecting the public's love for all things Egyptian after the 1922 discovery of King Tut’s tomb. But by 1953, both the zeitgeist and the Northside neighborhood had changed, and the name was changed to the Holiday Theater. It was the first in Colorado to run Spanish-language films in the 1960s, and continued to do so through the ’80s, when it closed as a commercial enterprise after becoming a fond cinematic memory for many Northsiders over the previous decades.

After it shuttered as a theater, the space was used for many things: a restaurant, a shop and, most recently, a place of worship for the Highlands Church, which relocated in 2020. The space was once again empty, and once again at risk for being lost to the ages. 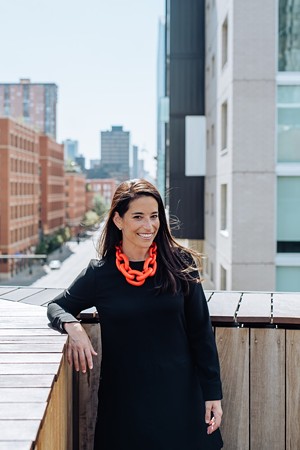 MCA Director Nora Burnett Abrams
Hip Photo 2
“When creative minds get together, really cool creative projects can emerge,” says Nora Burnett Abrams, the Mark G. Falcone Director of MCA Denver. “When the property became available, we were in no place to acquire it. We were still in the depths of the pandemic, and the timing wouldn’t have worked out because everything was moving fast.”

Cue the entrance of the Denver Cultural Property Trust, the philanthropic brainchild of MCA boardmember Mark Falcone and Continuum Partners LLC, a new organization devoted to saving Denver landmarks from the rapid development of the city that surrounds it, especially in Highland. The nonprofit entity was able to purchase the property for $5.1 million, which included not only the Holiday, but also apartments above the venue and retail spaces alongside. The MCA has signed a long-term lease at the Holiday at below-market rates — part of that philanthropic plan — for a little over one third of the 18,000 square feet of space.

The MCA has already been presenting events in the theater, and now will expand the lineup. The Holiday will be a “hub for the arts,” with the “aim to realize one-of-a-kind creative experiences for audiences that spark curiosity, challenge conventions, inspire, and delight,” according to the MCA website.

“We’re really excited to launch our initiatives,” says Abrams, “and really to launch collaborative projects and see where they grow.”

The idea of using the Holiday and “being in a space that’s very different from our building downtown was very intentional," Abrams continues. "We have a vision of living as a sort of decentralized museum. We live in the cloud, we live downtown, and now we’re going to live at the Holiday. Each of those environments bring with it new opportunities and possibilities.”

A significant amount of original detail remains from the old Egyptian Theater decor, uncovered by some restoration work in the early 2000s. Workers back then found decorated alcoves and plasterwork hidden by renovations in the ’50s, and thereby preserved over the decades. Abrams says the MCA is committed to respecting and celebrating that history.

“We’re taking a very non-intrusive approach,” she says of the renovation work. Aside from upgrades to audio/visual systems and some paint here and there, the space will be protected for what it was, and what it can be once more. “The intention is to keep the history as visible as possible to be able to engage with it again. We really want to bring that history into the present tense.” The inside of the Holiday Theater
Nikki A. Rae
Two of the first three events scheduled are already sold out: the Holiday Theater Opening Party will take place on Thursday, April 7, and include performances by Grupo Tlaloc Danza Azteca, Colorado Poet Laureate Bobby LeFebre, neighboring North High School Jazz Band, Cleo Parker Robinson Dance, poet Eleanor Perry Smith, and much more. On Friday, April 8, the venue rocks out with a concert featuring Chicano Batman and Los Mocochetes, plus an after-party with DJ Lengua (aka exhibiting artist Eamon Ore-Giron).

The Bill Frisell Trio will perform at 6 p.m. Tuesday, April 12. Grammy Award-winning guitarist Bill Frisell was called “the most important and innovative exponent of jazz guitar in his generation” by the Atlantic; he'll play with bassist Thomas Morgan and drummer Rudy Royston. Tickets are $40 and are still available.

Future programs include the MCA's long-running and fascinating "Mixed Taste" double feature that in the past has brought together such disparate elements as “Public Transportation & Polyamory,” “Incorrupt Saints & Hot Pockets” and “Church Signs & Icelandic Hip-Hop,” as well as events showcasing other artists and authors, and local organizations such as Lighthouse Writers Workshop.

Programs, installations and productions at the Holiday Theater will be ticketed through the MCA website, and museum members will get first access and discounts on programming.

The Holiday Theater is at 2644 West 32nd Avenue. For more information, see the MCA/Holiday Theater website.
KEEP WESTWORD FREE... Since we started Westword, it has been defined as the free, independent voice of Denver, and we'd like to keep it that way. With local media under siege, it's more important than ever for us to rally support behind funding our local journalism. You can help by participating in our "I Support" program, allowing us to keep offering readers access to our incisive coverage of local news, food and culture with no paywalls.
Make a one-time donation today for as little as $1.