Milagro Is the Luchador Superhero We Didn't Know We Needed

Milagro is not your typical superhero. Ross Radke and Matt Strackbein
It was 2004, and Longmont-based comic book artist Matt Strackbein was trying to think up a fresh new comic superhero who didn’t repeat the typical played-out plots that illustrate the genre's popular characters. He also wanted to create a hero who wasn’t the standard white American male, such as Spider-Man, Batman, Superman, Captain America. "Here’s another hero with a secret identity who wears a mask. They're just coming up with a new name and type of ability, but it’s the same old story,” he says.

“I don’t know how that has lasted as long as it has,” Strackbein adds. “The appeal wore off for me right away."

His desire for a more original storyline found a perfect match with lucha libre, a type of professional wrestling that is wildly popular in Mexico and has spawned movies, comics, toys and just about any merchandise and media that you can think of. The wrestlers are often huge celebrities who don’t take their masks off in public. They make an excellent, idiosyncratic fit for Strackbein's concept behind Milagro, the titular character of his upcoming grindhouse, noir-style comic book, Milagro: Héroe de las Calles.

After all, Strackbein, who creates art and comics under the moniker the Letterhack, had already decided that one of the components he wanted for the character was someone who was wearing a mask before becoming a hero. “This was in reverse,” he says. “It was kind of like an accidental hero. That was appealing, because it’s like the guy is already walking around the streets with a mask on and never takes it off.”

He came to that realization almost two decades ago, when he was trying to break into comics and developing every single idea he came up with, writing treatments and scripts and making full pitches. The frenzy of activity and consistent practice helped Strackbein purge the more rudimentary ideas from his head. 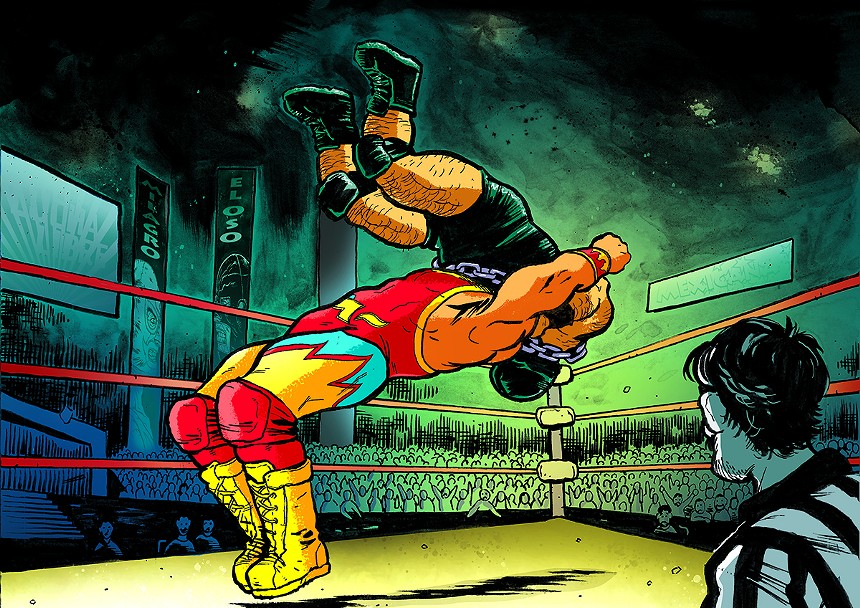 Guillermo Xegarra learned how to wrestle so he could depict the sport authentically.
Ross Radke and Matt Strackbein
“I came up with the idea when I was sitting around going, ‘How do people come up with these ideas?’” he recalls. “That’s the cliché question that everyone gets asked: ‘Where do your ideas come from?’”

Milagro is certainly a unique idea. He's a famous luchador who accidentally kills his mentor in the ring while in a drug-fueled rage and, now disgraced, roams the streets of Mexico City in shame. Occasionally, if somewhat begrudgingly, he helps out others in an effort to make amends and find redemption. He has no superpowers; he’s just a badass. And he never takes off the mask.

“You get this guy in a mask who fails at being a wrestler,” Strackbein says. “Then he’s been homeless, and you find a path to redemption. Beyond that, I wanted it to be a real ultra-violent fight comic, because I think that kind of stuff in the real world is terrible, but if you do it correctly in a comic or movie, it’s just entertaining.”

Strackbein collaborated with Oregon-based artist Ross Radke and Louisville-based writer Guillermo Xegarra to turn his idea into a full-color comic that's set to be released in advance of a book signing with Strackbein and Xegarra at Time Warp Comics & Games on Saturday, January 29.

Milagro is not a wrestling comic, says Strackbein, though he and his collaborators went to great lengths to make the fight scenes in the book as accurate as possible. Xegarra learned how to wrestle in the interest of authentically depicting the sport.

“Wrestling is an art form in itself,” Strackbein says. “We couldn’t just say he’s wearing a luchador mask and say he’s a wrestler. He’s got to be able to do the moves. We homed in on specific styles of wrestling the guy would use in the story.”

Because two of the three collaborators are white men, they also spent a lot of time making the illustrations of Mexico and its residents as culturally sensitive as possible. That was an important part of the creative process, Strackbein says, adding that Xegarra, who is a first-generation American with South American parents, conducted tons of research and helped guide Strackbein and Radke as they created the art. That included reading history and news articles in an effort to give the settings and people an air of authenticity and avoid dumb stereotypes about the country and its people. It would be too easy — and inaccurate — to throw a sombrero on Milagro’s head and say he's Mexican, Strackbein says. They didn’t want that.

There are more Milagro stories to be told in the future.

“There's a lot of backstory to the character that we don’t roll out in this volume,” Strackbein notes. “He does have abilities we don’t really go into detail about. We plan to.”

Milagro: Héroe de las Calles book signing, 2 p.m. Saturday, January 29, Time Warp Comics & Games, 3105 28th Street, Boulder. Copies of the book will be available at Time Warp, as well as Newcastle Comics, 508 5th Avenue in Longmont, and rossradke.com.
KEEP WESTWORD FREE... Since we started Westword, it has been defined as the free, independent voice of Denver, and we'd like to keep it that way. With local media under siege, it's more important than ever for us to rally support behind funding our local journalism. You can help by participating in our "I Support" program, allowing us to keep offering readers access to our incisive coverage of local news, food and culture with no paywalls.
Make a one-time donation today for as little as $1.