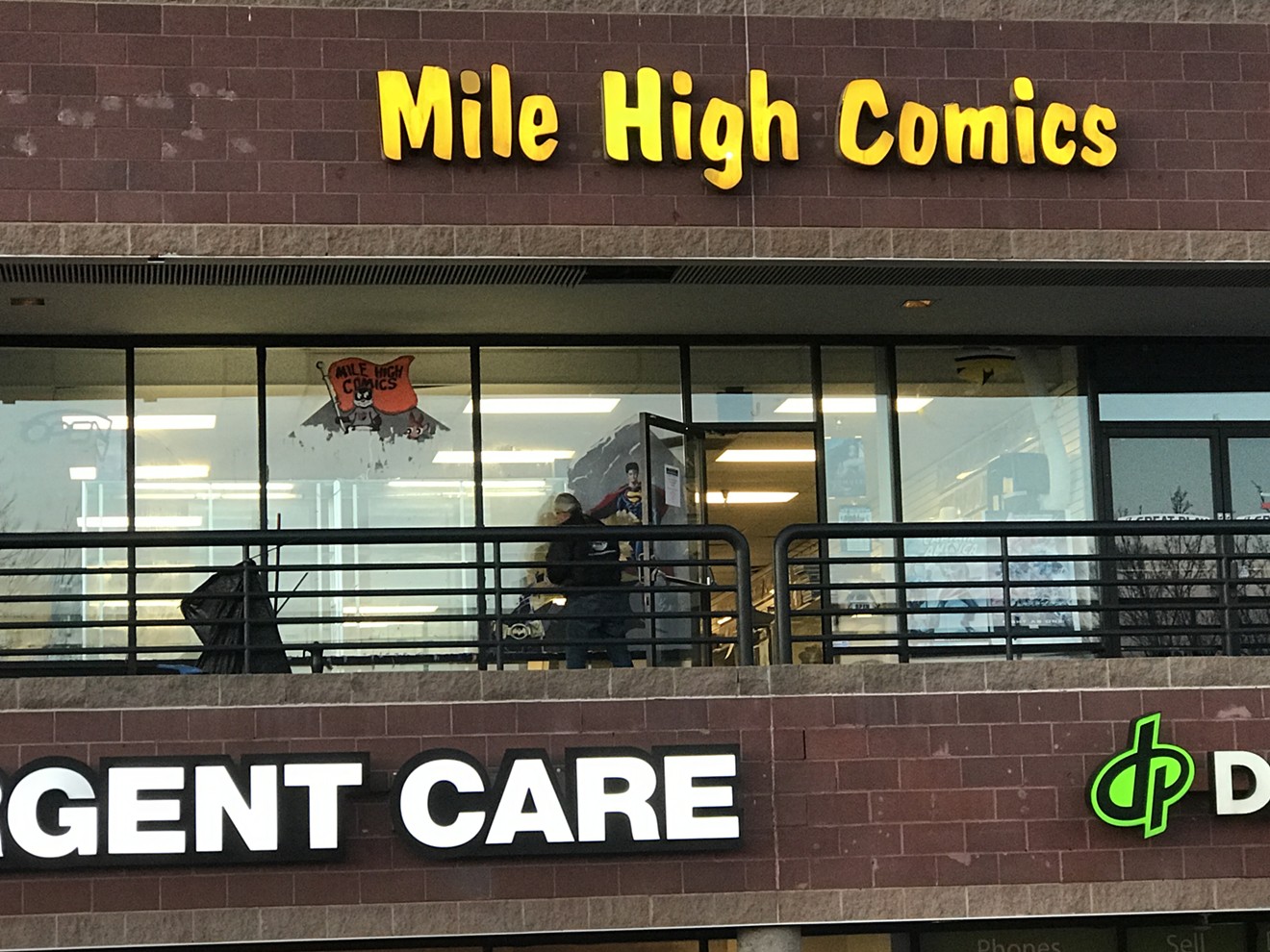 Mile High Comics' Colorado Boulevard location is shutting down after 28 years. Kyle Harris
On Sunday, December 30, a man with a long gray ponytail stood outside the Mile High Comics Glendale location, scraping away a painted image of Superman.

Inside, most of the toys and comics that once filled the shelves were gone; the company's president, Chuck Rozanski, had spent days lugging them to his Dodge minivan and driving them to the Mile High Comics flagship store at Jason Street.

The store manager looked like he could use a hug. Asked by customers if the shop was closing, he didn't answer directly, and instead pointed to a stack of fliers.

“It is with a heavy heart that I must pass on to you the news that we are closing our Glendale location permanently on December 31st,” Rozanski says on that flier. “Our decision was based upon many factors, including rising operating costs, intolerable parking shortages, and the lack of air-conditioning.”

The most heartfelt reason for closing, though, is the departure of Aaron Tucker, the shop’s manager. Rozanski describes him as “the heart and soul of this wonderful operation for nearly twenty years,” and adds, “We simply cannot conceive on continuing to operate this location without his boundless energy and enthusiasm.”

But hard times hit the center in the early ’90s, and it was demolished by 1995. The land where the legendary funland once stood now serves as the site of the Glendale Home Depot. This is the sort of oddball collectible you can find at Mile High Comics.
Kyle Harris
Mile High Comics moved to an upstairs spot in a building at 760 South Colorado Boulevard. Over the years, the price of rent has skyrocketed. With too little parking and a second-floor location that cost more than $5,000 a month, keeping the store alive was no longer worth it to Rozanski and his company.

“The complete lack of parking in that shopping center made a mockery of the $5,000+ in rent that we were paying each month, especially for a smallish second floor location,” Rozanski tells his customers in a blog post.

But it’s not all bad news for Mile High Comics, the venture that Rozanski launched in his parents’ basement in 1969. His newer megastore at 4600 Jason Street — a 65,000-square-foot jaw-dropping warehouse loaded with high-end collectibles, boxes of $1 comics and a seemingly endless supply of antique toys — has been doing gangbuster sales, and as a whole, Mile High Comics has been growing. The Mile High Comics superstore at 4600 Jason Street.
Kyle Harris
But regulars at the Glendale store will have to turn the page.

“As regards the future, we would ask you to please shift your patronage to either our Jason St. location, or our Lakewood store,” Rozanski writes. "This month has been the all-time best sales month in the 8-year history of Jason St., with our reputation as being THE fun place to spend a day with your kids grows with families throughout the Denver area. As of last evening, our sales at Jason St. were at an awesome 132.2%! of last December, so it only makes sense for us to stop paying outrageous rent in Glendale. I will actually miss having a store on the east side of town, but I definitely will not miss writing those rent checks..."

But east Denver will definitely miss Mile High Comics, a one-of-a-kind venture that's attained a legendary reputation across the country, even if it couldn't offer enough parking in Glendale.
KEEP WESTWORD FREE... Since we started Westword, it has been defined as the free, independent voice of Denver, and we'd like to keep it that way. With local media under siege, it's more important than ever for us to rally support behind funding our local journalism. You can help by participating in our "I Support" program, allowing us to keep offering readers access to our incisive coverage of local news, food and culture with no paywalls.
Make a one-time donation today for as little as $1.