"Insomnia," from the series Acciones para Recordar (Actions to Remember), by Karîna Juárez. Denver Art Museum
The way that women have contributed to and influenced the field of photography throughout the twentieth century is no small topic to address, let alone curate into a comprehensive exhibit. But the Denver Art Museum’s Modern Women / Modern Vision: Works From the Bank of America Collection, on display Sunday, May 1, through August 28, offers a beautiful interweaving of parallel stories: the evolution of photography as an artistic medium, the social and political change occurring over the course of a century, and the women behind the cameras who were documenting, reacting to and commenting on it all.

Loaned to the Denver Art Museum through the Bank of America Art in our Communities® program, this collection showcases more than 100 photographs from around fifty female photographers, with works spanning from 1905 to 2016. “The photographers chosen for this exhibition tell the story of how women have helped lay the groundwork for the development of this genre of art,” says Raju Patel, market president of the Bank of America Denver. Although the show was originally created by the curatorial staff at Bank of America, each museum that it travels to has its own creative freedom in the layout, gallery graphics and overall vision for the exhibition.

“These are all really important photographs by people who were prominent in the field at the time they were making these pictures,” says Eric Paddock, curator of photography at the DAM. He and senior curatorial assistant Kimberly Roberts spearheaded the DAM’s unique version of the show along with exhibition designer Tom Fricker. And they’ve created a seamless journey through this impressive collection, relating many of the photographers and their work to each other either chronologically, thematically or conceptually.

“Throughout the exhibition, I think there will be a lot of very recognizable, well-known names,” says Roberts, “But then mixed in with that, there’s a lot of women who people might not have been aware of.” This is perhaps the most compelling feature of the show. It provides the chance to see not only many famous works from photographers such as Sandy Skoglund, Diane Arbus and Berenice Abbot (who also has a photo in the DAM’s current Curious Visions exhibit), but also their lesser-known contemporaries, giving you a larger understanding of specific time periods and movements.
click to enlarge For example, one of the most iconic pieces you will see in the collection is Dorothea Lange’s "Migrant Mother" (1936), which has been widely circulated and replicated throughout the century. “She’s enormously prominent,” says Paddock. “But we also have these two pictures by Marion Post Wolcott, who was working for the same government agency, at the same time, in different parts of the country, and I just think these are magical, remarkable, powerful pictures. So there are some surprises.”

Of these early works in the collection, Paddock notes, “These women embraced photography as a path to independence and economic freedom. But also in the way they used the camera; there’s something innovative in each of these people’s work that had some influence on later photography.”

Many of these early pieces reflect the photographers' social and political awareness while acting as a documentation of the times — a theme that also shows up in the more modern works of Cindy Sherman and Barbara Kruger. “They are examples of photographers who are reacting to, or playing off of, second-wave feminism," Roberts says. "So both of those [women’s works] are very much inspired commentary." Denver Art Museum
Indeed, one of the most powerful sets of photos in the exhibition is Barbara Kruger’s Untitled (We Will No Longer Be Seen and Not Heard) (1985), a series of nine consecutive panels employing mass-media imagery and typography, somewhat reminiscent of Warhol’s pop art, that comments on consumerism, advertising and the oppression of women. “She was really in the vanguard of feminist artists,” remarks Paddock.

Another captivating collection is a series of six photos by Diane Arbus, including "Identical Twins" (1967) and "Mexican Dwarf in His Hotel Room" (1970). “I’m always really interested to see Diane Arbus’s photos, and I’m more interested to see how people respond to them," Paddock says. "I think people tend to approach these photos with a bit of a smirk, and I find that the longer you look at them, the more closely and open-mindedly you look at the people in the photos, the more pathos there is, the more empathy there is...and I think they have a lot to tell us about what it is to be human, and about how to behave toward others who aren’t like us.”

There are also moments of beautiful coevality and synchronicity between women of the same region and time period, such as the juxtaposition of six photos by Mexican photographers Graciela Iturbide, Mariana Yampolsky and Flor Garduño, who shared various professional and educational relationships with each other throughout their careers. “There’s a creative professional lineage that’s going on there. They’re all independent, but there’s a lot of interesting interconnections between the three women,” says Roberts. “It’s interesting to see all three of those artists exhibited together.”

A large section of the exhibit explores the medium of photography as it entered into the wider dialogue about art. “Whether it was painting, sculpture, performance [or] video," Paddock says, "this work kind of inflected what artists in other mediums were doing and have done since then.” These mid-century women were setting the stage for photography to continue evolving while also drawing inspiration from their own predecessors. "Revenge of the Goldfish," by Sandy Skoglund.
Denver Art Museum
A beautiful illustration of this is a piece from Carol Espíndola’s series La Atlantida (o la utopía del cuerpo femenino) (Atlantis [or the utopia of the female body]), created around 2016. In it, Espíndola depicts Botticelli’s famous Renaissance painting "The Birth of Venus," but replaces Venus’s figure with her own hunched-over form, intentionally shielding herself from the proverbial male gaze.

“It’s a conceptual piece talking about women's bodies,” Roberts explains. “She did a whole series reinventing well-known works with her performance, in a way.” Through this concept-driven work, it’s clear to see how earlier feminist photography of the ’60s, ’70s and ’80s paved the way for modern-day artists such as Espíndola to continue exploring the topics of gender, oppression and representation in today’s world.

Also among the modern-day works in this exhibit are two photographs by Carrie Mae Weems: "After Manet" (2002) and "Untitled (Woman With Daughter)" (1990). The latter is part of a powerfully intimate series called the Kitchen Table Series, of which Roberts says, “It’s kind of this theater of the human experience, of everyday life [and] the things that go on in a house around a kitchen table. These are all kind of performed for the camera in this very familiar space, and so I think it’s a very relatable series.” 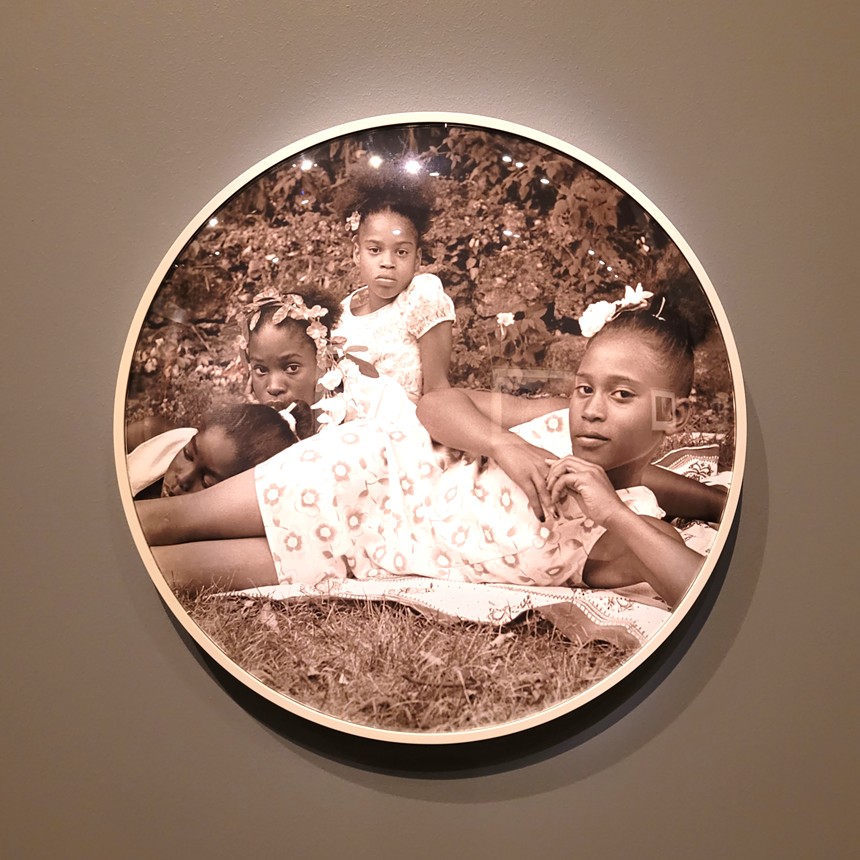 Denver Art Museum
The diversity of subject matter, technique and conceptual ideas that we find in today’s collection of photography is remarkable, and this exhibit tells the story of how we got here. Through Modern Women / Modern Vision, it’s clear to see how the profession of photography has grown, evolved and benefited from the many talented women who’ve embraced the medium over the past 100 years.

“I think this can be a real eye-opener for people," Paddock concludes. "I hope they’ll discover work by artists they didn’t know, and they’ll discover ways of seeing things and ways of making photographs that they couldn’t have imagined otherwise.” Denver Art Museum
Modern Women / Modern Vision: Works From the Bank of America Collection, Denver Art Museum, 100 West 14th Avenue Parkway, Sunday, May 1, through August 28. This exhibition will be included in general admission. For tickets and more information, visit the Denver Art Museum website.
KEEP WESTWORD FREE... Since we started Westword, it has been defined as the free, independent voice of Denver, and we'd like to keep it that way. With local media under siege, it's more important than ever for us to rally support behind funding our local journalism. You can help by participating in our "I Support" program, allowing us to keep offering readers access to our incisive coverage of local news, food and culture with no paywalls.
Make a one-time donation today for as little as $1.