Viviane Le Courtois's "Dirt Soup," in mid-creation for Axis Mundi. Christopher R. Perez
The psyche is vulnerable in ways we might never fully understand, and it makes sense that environmental concerns, now in overdrive, might mutate our gut reaction to them, en masse. Axis Mundi: Environmental Melancholia, Collective Social Mania and Biophilia, a complicated three-part group exhibition facilitated and mounted by artist Regan Rosburg and PlatteForum, follows those convoluted paths of modern eco-psychology through layers of art, science and our delicate symbiosis with nature.

Axis Mundi opens on Saturday, September 16, in the main exhibition space at PlatteForum, in the Temple, and spreads out to nearby satellite venues at the Land Library and the Olympic Building, comprising works by 21 artists overall.

At the heart of the project is Rosburg's take that society is not properly digesting the effects of the world's current environmental swan dive.

“Axis Mundi approaches the whole idea of climate change, human involvement and changes happening around the planet — not from a place of hard information or science, but instead from the perspective of psychology,” Rosburg elaborates. “But in spite of all the information we have about climate change, our mentality hasn't changed enough to change people’s behavior.”

Darya Warner, "A Tribute to Edison."
Courtesy of PlatteForum
Her theory of our society's psychological state is threefold. It begins with the onset of melancholia, a static mindset in need of release: “You don't truly mourn something until you go through the ceremony or symbol, like a dove release or burning a love letter,” Rosburg explains. “Otherwise, your melancholia becomes stagnant, an unprocessed place where you get stuck. Unsolved melancholia then transitions into mania — addictions are common, or people are driven to consume and go shopping. Those two things, melancholia and mania, form an endless loop.”

We never come to terms with our place in nature when the overwhelming evidence of human abuse looms large, she implies. 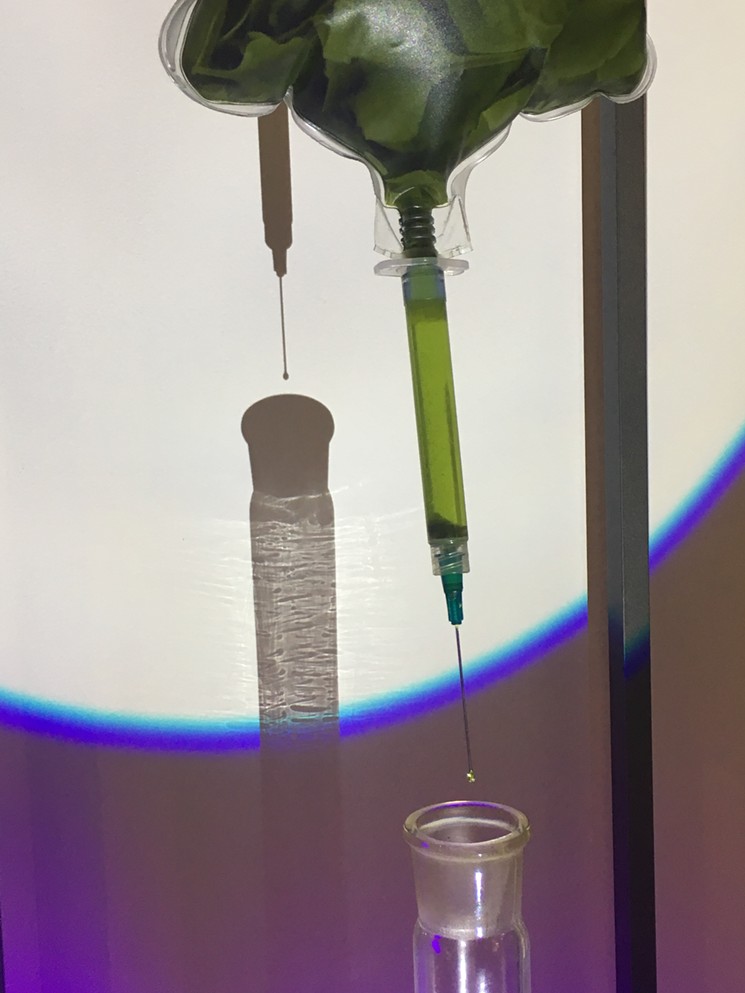 Tarah Rhoda, "Ourglass."
Courtesy of PlatteForum
More than anything, Rosburg hopes the exhibit will spur healing conversations — and perhaps turn the eco-psychological circle of despair and acting out around. She thinks artists have the power to lead the way toward “finding one’s way out of the circle intact and in tune with nature. It’s the biggest contribution artists can do right now,” she says. “We’re only as sick as our secrets.”

The works in Axis Mundi take many forms and levels of complexity. Some, like Tarah Rhoda’s “Ourglass,” look like a science experiment, Rosburg notes. For that installation, a laboratory setup extracts chlorophyll from a bunch of spinach in an IV bag, transforming the resulting liquid into a deep red solution resembling hemoglobin as it drips into a beaker. Darya Warner, on the other hand, suspends bioluminescent algae inside lightbulbs and encourages viewers to interact with the natural light show.

Sit down and talk over some of Viviane Le Courtois's "Dirt Soup."
Courtesy of Viviane Le Courtois
In contrast, Viviane Le Courtois’s participatory outdoor installation “Dirt Soup,” involves several human elements, beginning with a canopy of woven plastic bags created with the artist before the exhibit by community members. During the September 16 opening at the Land Library, Le Courtois will serve soup in homemade clay bowls beginning at 7 p.m., inviting people to slow down and sit together, sans electronics and the Internet, over a simple dinner, to talk face-to-face about climate change and whatever else is on their minds.

Rosburg’s own megalithic installation expands on “The Relentless Memorial,” a contemplative space she created earlier this year for another environmentally based exhibit, Storm Warning, at the University of Denver’s Vicki Myhren Gallery, by asking viewers to drop their manias and possessions at the door. “It’s meant to completely eliminate the tendency of people to walk through the work, taking pictures, which immediately removes them from the experience,” she says.

Rebecca Di Domenico, "The Wounding."
Courtesy of PlatteForum
Buried in more than three tons of nurdles (tiny plastic industrial pellets used to manufacture products), it’s a structure built from black recycled plastic wings and embedded with natural minutiae: wasp nests, leaves, flowers, bones and other found objects. From a distance a pitch-black, oil-slicked monolith, the installation is “scary on approach, but up close, it’s beautiful, full of these weird things that keep people locked into exploring it,” notes Rosburg. “It’s a tactile, visual representation of the massive scale of the problem, where people can experience an unmediated hold on their part in it.

Axis Mundi opens with a reception from 6 to 9 p.m. on September 16, and runs through October 7 at three Curtis Park locations within walking distance: PlatteForum, 2400 Curtis Street; the Land Library, 2612 Champa Street; and the Olympic Building, 2565 Curtis Street. PlatteForum will also host an Axis Mundi Temple Talk from noon to 1:30 p.m. Saturday, September 23, with exhibit artists and experts Ren Adams, Vivian Le Courtois, Suchitra Mattai and Dr. Sean Stewart discussing environmental melancholia’s relation to shifting baseline syndrome, and the manifestation of consumption and mania in today’s society. Both events are free. For more information on Axis Mundi, visit the exhibit website.