Roland Bernier’s acrylic alphabet (on the wall); “Word Works” (on the floor) at the Arvada Center. Robert Delaney
Beginning in the 1980s and up until a year before he died in 2015, Roland Bernier was a fixture in Denver’s contemporary art scene — a respected artist’s artist and a dedicated advocate for the visual arts. He and his wife, Marilyn Bernier, were keen supporters of the community of artists here, taking an egalitarian approach to seeking out their efforts whether they were on display at alternative spaces, galleries or museums — and for his part, Bernier showed his own work at all three types of venues over the decades.

Now, six years after he died, the Arvada Center — working together with Bernier’s representative, Walker Fine Art — is taking a fresh look at his conceptual work in a major exhibit, Roland Bernier: In Other Words. The show reveals that Bernier’s vision is still as crisp and cutting-edge as ever. It’s hard to believe that everything on display isn’t brand-new instead of being years, sometimes decades, old.

Born in Providence, Rhode Island, in 1932, Bernier grew up in poverty, quitting school when he was sixteen to take a job designing jewelry — already an artist as a kid. He enlisted in the U.S. Air Force and wound up stationed near Austin, Texas. After being discharged, he used the G.I. Bill to enroll at the University of Texas, completing a BFA degree there and going on to earn an MFA in 1960 at the University of Southern California. After moving back to Texas for a short time, he relocated to New York in 1966 when his first marriage fizzled out, then briefly lived in Baltimore, hometown of his second wife, Marilyn. The couple set off to find themselves in 1972 and headed west. They wound up in Denver with no intention of staying permanently, but they were out of money, so Bernier found a job teaching art at the Park Avenue Center. This allowed them to permanently settle here, and the rest is Denver art history.

A few years ago, Collin Parson, the Arvada Center’s gallery director, began planning a major presentation of Bernier’s oeuvre scheduled for January 2021. But when the center was closed for months in 2020 in response to the COVID-19 pandemic, Parson needed to push back the date. 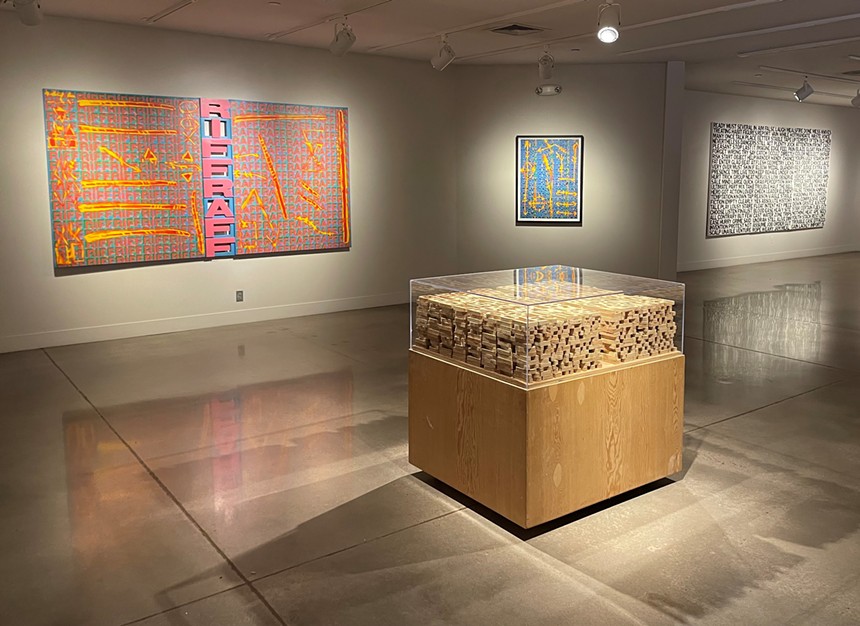 Installation view of Roland Bernier: In Other Words at the Arvada Center.
Robert Delaney
Bernier was tremendously prolific. Over long periods, he embraced abstraction, ultimately creating pseudo alphabets of enigmatic symbols that were arrayed in loosely organized grids. He called this sprawling body of work, which was done in the 1980s, his “Graffiti” series. In his compositions from the ’90s, beginning with the “Arty-Fax” series, Bernier began to incorporate words, which were painted or cut out of plywood. At one point, everything else was eliminated from his pieces, leaving behind works made up entirely of random words, a direction that would occupy Bernier for the rest of his life.


Nearly all of the pieces included in the Arvada show come from these final stages of Bernier’s career, though Parson has included some related material dating back as far as the 1960s that anticipates the later works. I understand why Parson zeroed in exclusively on the word-based pieces, and showcasing those is surely the call that Bernier himself, who turned his back on his earlier techniques, would have made. Nonetheless, I was sorry to see that Bernier’s elegant abstracts and marvelous “Graffiti” works that he’d done in the 1980s had been left out.

Appropriately enough, Roland Bernier: In Other Words starts off with a group of those ’60s drawings that have a neo-Dada feeling in which abstract shapes in watercolors and inks are juxtaposed with words and letters done with transfers arranged into off-kilter arrays. In one, various shapes hang below an arcing line above which the title, “Just about now,” is spelled out in a simple black typeface. In “567 See,” three open-ended outlined shapes are accented by letters and numbers, and across the bottom center is the word “bed.”

The show then fast-forwards a quarter of a century to a gallery full of the much larger and more ambitious “Arty-Fax” paintings and works on paper, along with related pieces from the 1990s. This is where the show really gets off the ground.

For a large five-by-ten-foot diptych, one panel is predominantly gray over a field of red and yellow, and the other is in blue with dark over lighter shades. Using stencils, the gray has been employed on one panel to spell out the word “TRUE” repeatedly in an all-over pattern; on the other, in dark blue, the word “BLUE” is handled in the same way — hence the title, “TRUE BLUE.” A striking element of the painting is a compass-like circular form pierced by jagged yellow arrows trimmed in red-orange that anchors the blue panel. Roland Bernier’s “TRUE BLUE,” acrylic on canvas, at the Arvada Center.
Robert Delaney
A closely related piece, which is also monumental, is “RIFF RAFF,” in which both panels are covered in lines of text spelling out the title, with a three-dimensional ladder in blue connecting the two panels. Giant pink letters run vertically down the ladder, and they also spell out “RIFF RAFF.” In both of these pieces, and several others in this group, the words actually have a semi-narrative quality, but most of the time Bernier used words regardless of what they might have meant.

“Ready, Aim, Fire,” acrylic on canvas by Roland Bernier, at the Arvada Center.
Robert Delaney
Bernier also used cut-out letters to create freestanding sculptures like “Word Works II,” an unfinished plywood box topped by stacks of plywood letters spelling out words covered by a clear acrylic case. Though only the top-most words are legible, the stacks below are also theoretically readable in that they also spell out words. For these sculptures, and for many of the paintings, words with the same number of letters have been chosen, but sometimes Bernier spontaneously chose words regardless of how long or short they were, relying on his unerring instinctual sense for building the compositions while arranging them.

As viewers proceed through the show, with one standout after another, they'll notice that although Bernier never wavered from his interest in the formal power of printed words, he explored the idea in a range of ways. In some, he takes a minimalist direction, draining the color and using black and white only, such as in “Ready, Aim, Fire,” or even more strikingly in another black and white painting, “Duck Soup,” wherein the words are essentially completely hidden beneath the paint, so that it reads like a two-tone color field. In other cases, sculptural shapes or figurative images are used. A good example of this is “Death in Venice,” a row of five identical shovels covered in prints of white type on black grounds. Elsewhere, in “Soap Opera,” Bernier has covered letters in color photocopies of detergent packages.

“Soap Opera,” wall relief in wood and photocopy by Roland Bernier at the Arvada Center.
Robert Delaney
The exhibit comes to a crescendo in the Atrium gallery with an oversized alphabet rising above our heads, and in front, a mammoth version of the “Word Works” sculptures made up of stacked plywood letters on a plywood box. When I finally arrived at this part of the show, my head was spinning at the very idea that one person could have done so many elaborate paintings and sculptures. And then the show ends on a poignant note, an empty frame with “Bernier” in the lower-right corner and a column of panels with the name “Bernier” in a lyrical cursive. According to his widow, Marilyn, these pieces, created in 2011 and 2013, respectively, are about Bernier facing the end of his own life.

Roland Bernier: In Other Words opens with a reception from 6 to 9 p.m., Friday, September 17, and will run through November 14 at the Arvada Center, 6901 Wadsworth Boulevard, Arvada. Reservations and face masks are required. Visit the Arvada Center online for more information.
KEEP WESTWORD FREE... Since we started Westword, it has been defined as the free, independent voice of Denver, and we'd like to keep it that way. With local media under siege, it's more important than ever for us to rally support behind funding our local journalism. You can help by participating in our "I Support" program, allowing us to keep offering readers access to our incisive coverage of local news, food and culture with no paywalls.
Make a one-time donation today for as little as $1.