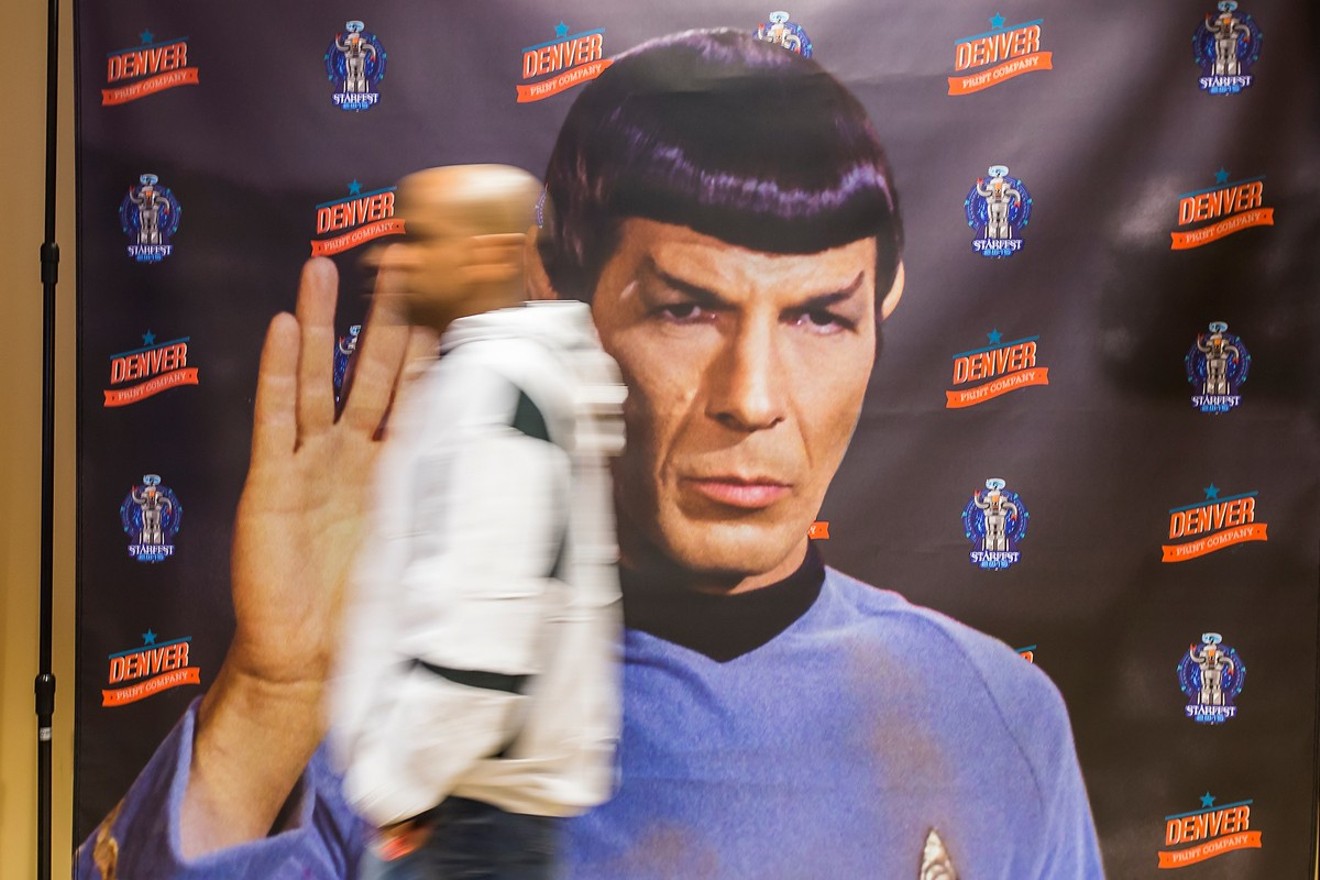 StarFest has lived long and prospered. Danielle Lirette
This is the final frontier for the StarFest enterprise. After 45 years of fandom, one of Denver’s most popular nerd-loving events is ending its run with one last weekend celebration from May 13-15 at the Hyatt Regency Denver Tech Center. Special guests for this final sci-fi hurrah include Terry Farrell (Star Trek: Deep Space Nine), Brent Spiner (Star Trek: The Next Generation and Picard), Michelle Hurd (Picard) and Zach McGowan (Black Sails). Tickets are still available, with weekend admission starting at $65.

Like the StarFests that have come before — at least in recent memory — the convention is better described as a “collection of festivals.” What began as a simple sci-fi fan event to meet celebrities grew over the years with additional events, including ArtFest; a Harry Potter-esque wizarding experience, Avistrum; ComicFest; CosPlay; GameFest; HorrorFest; KlingonFest; ModelFest; and ScienceFest. And then there are the aspects that tie the whole collection together, from the hub of the Main Room to the super-popular Federation Ball on Saturday night. Each section of the experience is on site and available to all attendees.

“When I was sixteen years old,” she recalls, “I remember watching the first Star Trek episode, and I was sold. I sent a script to [Trek creator] Gene Roddenberry. He sent me back the nicest letter, thanked me for caring about the show and sent me an autographed picture of [William] Shatner and [Leonard] Nimoy with the Enterprise.” He also said that the show didn’t accept unsolicited manuscripts, but encouraged her to keep writing.

As seminal as that experience might have been, Walker says the inspiration for StarFest itself came from a 1976 science fiction convention in New York City. At the time, she was part of a national organization called the Star Trek Welcommittee, which had been founded in 1972 to answer questions and support the fandom surrounding Star Trek, and she made the road trip to NYC to see the fan events just starting to pop up.

“I remember driving back,” Walker says, “and thinking, 'Why can’t we have something like this in Denver?'”

Walker and her sister Karoline Jobin, who’d gone with her on the trip, started talking about how it might be done. Walker laughs when she remembers thinking, “How hard can it be?”

With the help of family and friends, the first StarFest — then called StarCon — happened over Mother’s Day weekend in 1977. While Walker says having the event on Mother’s Day was a “big mistake,” the timing could not have been better in another respect: About two weeks later, a little movie called Star Wars debuted in theaters.

While Star Wars was far from the worldwide pop-culture juggernaut that it’s become in the decades since, there’s still excitement in Walker’s voice when she talks about it as a factor in StarFest's opening year.

“We got contacted by these guys at Lucasfilm,” she says, “and we met them out at Stapleton. They were on their way to another show, but we met these guys at the gate — some of their publicity people, I imagine. They had a big suitcase, and one of them gave us the trailer and a stack of little fliers to hand out. People loved it. We must have run that trailer at least a hundred times. We felt so cutting-edge.”

But not even Walker imagined how big Star Wars would be. “I remember turning to my sister as we drove away from the airport and saying how crazy it was that they wanted us to run this trailer all weekend,” says Walker. “It was a lot of fun.”

And the convention did well — well enough that it broke even financially. Walker reports that it never stopped breaking even throughout all these years. “It was never meant to turn a profit,” she says. “It was a labor of love for everyone. No one got paid; we were all volunteers. What money we had left over from each convention just got socked away to pay for the next one. It was very grassroots.

Walker and her family never really needed to make money on StarFest; they had their own company, Mile High Trailers, still operating today out of Kiowa. StarFest became a family operation as well. When her husband, Stephen, came aboard in the early ’80s, he made one big change: adding a second annual convention named StarFest, the name that’s stuck.

“He thought the word ‘con’ had a negative connotation,” Walker remembers. Even the Walkers' twins — only three years old in 1977 — helped with the event as they grew up right along with it.

StarFest kept getting bigger and better. There were two conventions a year for a while, partially because of how TV shows at the time would go on hiatus in the late spring, making their stars more available. It would eventually pull back to just one, but also made forays to other locations, including Colorado Springs; Billings, Montana; Wyoming and even Australia for a few years. Over time, the Denver show would keep adding all the “sub-fests," events devoted to comic books, model-building, cosplay, the horror genre and more.

Walker remembers a time when meeting a celebrity was a very different experience. “It used to be that guests came and didn’t charge for autographs,” she says. “They’d speak twice a day. It was just totally a different world than it is now.” Walker says the convention held out on such charges as long as it could, but when baseball players started charging fans for autographs, it slowly became the standard.

Still, celebrities have been the core draw from year one, which became evident as the event grew in attendance and recognition. In 1988, Patrick Stewart was new to the Trek canon as Captain Jean-Luc Picard, and made StarFest his first convention appearance; he’d repeat that Denver visit when the show ended. Not to be outdone by Stewart, William Shatner made the first of three appearances at StarFest the very next year. Many stars would follow, from original Spock Leonard Nimoy in 2007 to Zachary Quinto, not yet the new Spock, in 2008. In the last 45 years, hundreds of sci-fi celebs have come through Denver, courtesy of StarFest.

Two of Walker's favorite guests: Tom Cruise, who came to the convention in 2004 to promote his then-upcoming film Interview With a Vampire, and John Travolta, who arrived in 2000 to talk about the notorious Battlefield Earth. “I was really impressed with John Travolta,” she says. “He was so nice. Tom Cruise was the same way.” She also mentions director Francis Ford Coppola admiringly, saying he enjoyed Denver so much that he decided to premiere his film Dracula here.

And yet all good things must come to an end. “I’m getting older,” Walker says simply. “I’m 72. My kids are almost fifty. We’ve all just gotten older, and it’s a lot of work. We’ve loved it, absolutely loved it, but we thought 45 was probably a good stopping point.”

Last year, StarFest lost its emcee, Kevin Atkins, who'd been there from the start. “He was a very dear friend,” says Walker. “We’re going to miss him a lot. He was the glue that held the main events room together. He was so good. People knew him. It’s like a family.”

Exactly like a family — that’s always been the way of StarFest, a family-run fan event that in turn creates family among its attendees year after year. “And nothing can make you crazier than family,” jokes Walker. “And happier. And happier.”

So yes, it’s the end of Starfest. But it might only be the end of StarFest as run by the Walker family. Could someone else buy it and keep it going? “There have been people asking,” says Walker. “And we’re open to the idea if someone really wants to do it. It’s hard, but there are a lot of capable people who could probably take it over.” But there are no details, deals or even offers yet to report.

Meanwhile, Walker has a message for the many fans of StarFest, now that it’s time to bring the ship to dock.

“I hope they feel that they had a place to go," she says. "One that made them feel comfortable and accepted and a part of something that was exciting. That they had a good time. That it was special. That they were among friends.”

The final voyage of StarFest will take place at the Hyatt Regency Denver Tech Center, 7800 East Tufts Avenue, May 13-15. For tickets and more information, see the StarFest website.
KEEP WESTWORD FREE... Since we started Westword, it has been defined as the free, independent voice of Denver, and we'd like to keep it that way. With local media under siege, it's more important than ever for us to rally support behind funding our local journalism. You can help by participating in our "I Support" program, allowing us to keep offering readers access to our incisive coverage of local news, food and culture with no paywalls.
Make a one-time donation today for as little as $1.