Get happy in Nederland. carouselofhappiness.org

We asked Erin K. Barnes, author of the just-released Easy Weekend Getaways from Denver & Boulder,  to embrace the chaos and describe her top ten attractions in Colorado.

Even if most Coloradans will enjoy a stay(at home)cation this July 4 weekend, we can dream, can't we? Her winners:

Barnes loves the stories behind how many of the mountain towns like Leadville — a former silver mining stronghold that was once the second-most populated city after Denver — were created, by “people who came here to strike it rich, and were really bold and adventurous, committed to their own stubborn dream.” Although about three-quarters of the gold-seekers returned home, the people who stayed created a “sinful, bold, adventurous vibe.” Another favorite? Central City, originally called City of Central, another mining settlement that was a result of the Pikes Peak Gold Rush and was once known as “the richest square mile on Earth.”


9. The rush of the Arkansas River near Buena Vista

“It feels different there, like you’re near the ocean,” Barnes says of the river that famously offers some of the country’s best Class II-IV whitewater rafting, especially through Browns Canyon near Byoona Vista, as the locals call it. “The rush of the river is big and calming, and the people are super-cool.”

8. The Carousel of Happiness in Nederland

While serving in Vietnam, a Colorado soldier dreamed of creating a carousel...and when he returned to Nederland, he did just that. “There’s the history, and I love to take my kids there,” she explains. “It’s old-timey Americana, and it just feels good.” Until recently, Nederland was also host to Frozen Dead Guy Days, a quirky festival celebrating a famous frozen dead guy named Bredo Morstoel (the festival has since moved to Estes Park, and Grandpa Bredo, as he’s known, may soon follow).


7. The free-thinking, Hunter S. Thompson version of Aspen
“I hadn’t gotten to really explore,” Barnes says of this period and part of Aspen. “It was a place for free thinkers and a lot of cool cultural institutions. Really influential people spent time there.”

6. Bishop Castle
“Sometimes I think that’s my favorite place. Just going there is such an experience,” she says. 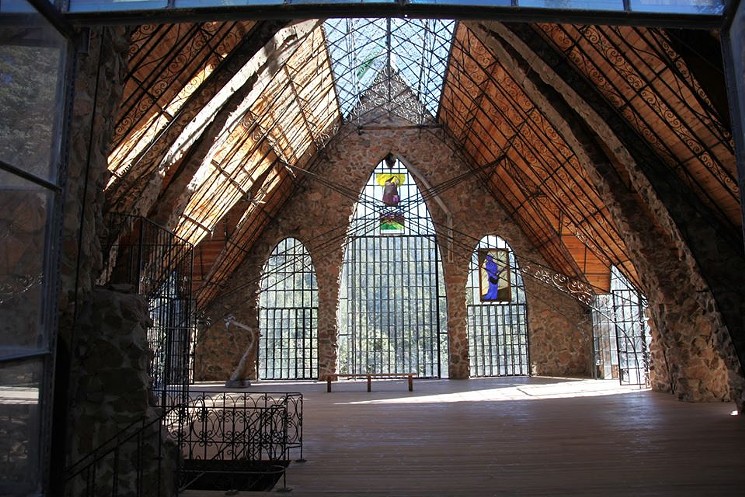 A weird and wonderful experience in Wetmore.
Bishopcastle.org
5. The Stanley Hotel in Estes Park
This landmark exemplifies the “ultimate Colorado stubbornness for a dream,” Barnes notes. “Imagine building a hotel so grandiose when there were barely any people in the town.” The Stephen King tie-in just adds to the allure.

4. The Black Monarch and the town of Victor
Yes, Barnes does publicity work for the revamped hotel and the old mining town, but she took the job “because I was so drawn to them,” she explains. “They embody the weird.”

3. Red Rocks
“Don’t ignore the amazing things we have here just because you’re a native,” Barnes reminds us. “This is the most Colorado place ever: You can watch live music, do yoga, drink beer.” When it reopens, that is.

2. San Luis Valley with the UFO Watchtower and the Great Sand Dunes
“It’s a hot spot for the spiritual. I like hot spots for everything,” says Barnes, who particularly likes the Great Sand Dunes. “I’m not a huge mountain person; I’m more of a beach person. I had this intense connection the first time I visited. It feels like the magic of the Sand Dunes inspires people to do really extraordinary things.”
click to enlarge The neighs have it!
Erin K. Barnes
1. Blucifer
Yes, she knows that “Mustang” at Denver International Airport is “kind of a weird choice,” maybe even a controversial one, since making the sculpture killed its creator, Luis Jiménez. “But for an airport to choose that is really inspiring and cool, especially since airports usually have bland art, hotel art,” Barnes notes. “It’s one of the first things to welcome people to Colorado. That’s amazing to me. I love it as a piece of art. It’s terrifying, and when you gaze into the eyes, you feel its power. It feels like Blucifer is alive.”

And since her book is all about getaways, does she have a particular favorite way to spend a weekend in Colorado? (Assuming everything is open, of course.

"My favorite weekend getaway is really hard to narrow down," Barnes admits. "It would either have to be Marble Distilling Co. in Carbondale; Strawberry Park Hot Springs in Steamboat, because there's also so much other stuff you can do (everyone loves Steamboat!); wine tasting in Palisade or mountain biking in Crested Butte."
KEEP WESTWORD FREE... Since we started Westword, it has been defined as the free, independent voice of Denver, and we'd like to keep it that way. With local media under siege, it's more important than ever for us to rally support behind funding our local journalism. You can help by participating in our "I Support" program, allowing us to keep offering readers access to our incisive coverage of local news, food and culture with no paywalls.
Make a one-time donation today for as little as $1.