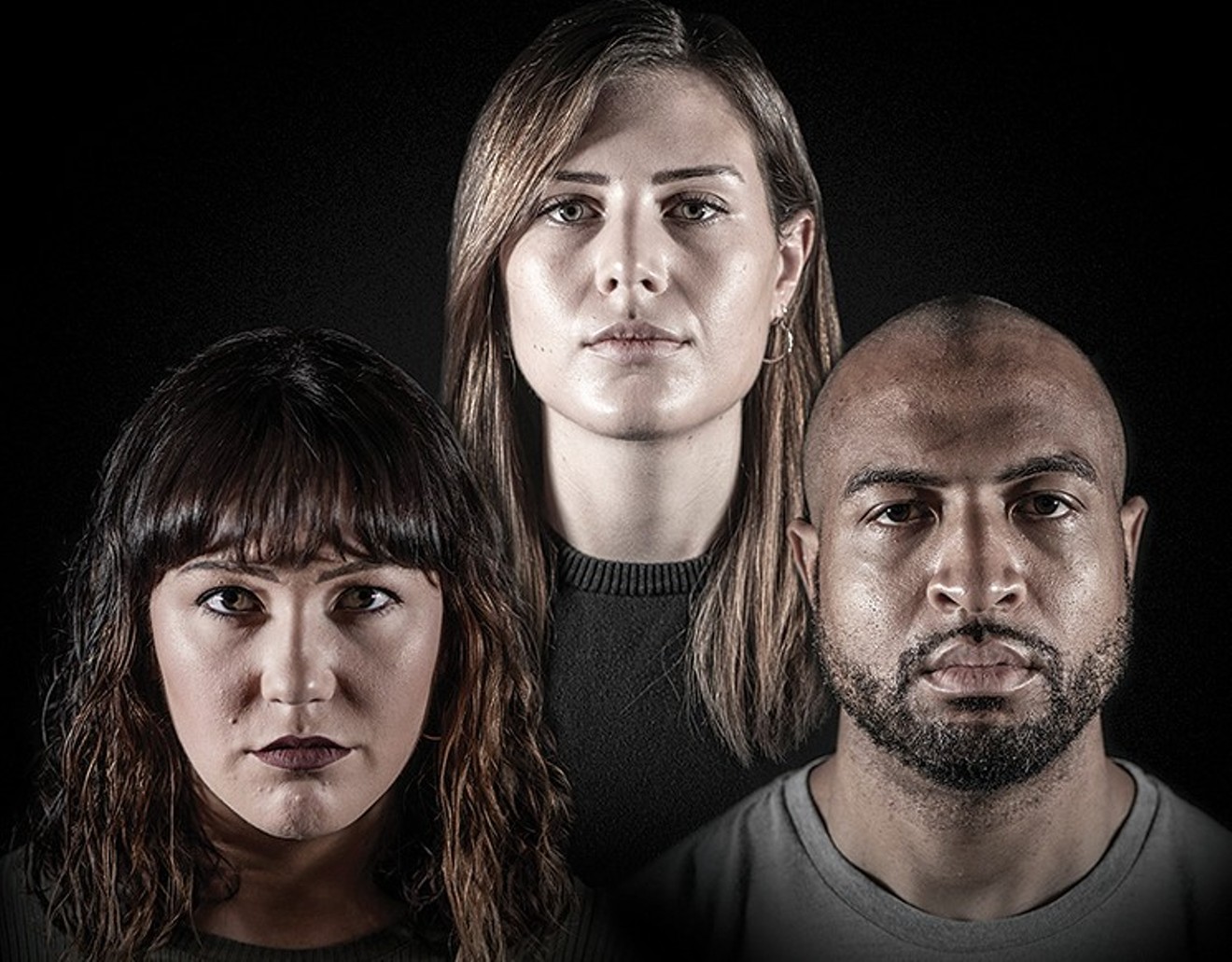 PSL members Eliza Lucero (from left), Lillian House and Joel Northam are in the film In Defense of Justice. Evan Semón
In a usual year, this week in January would see a calendar filled with events connected to the National Western Stock Show and Martin Luther King Jr. Day. But this is not a usual year. Most MLK events have moved online; find out more about Denver's MLK lineup here, and Aurora's here. And Honoring the Legacy has rounded up Stock Show entertainment into a virtual corral.

While the Phipps IMAX Theater has reopened, local stages remain dark — but both Buntport and Theater 29 are debuting enlightening online entertainment this week. Keep reading for twelve of the best things to do around town this weekend, including watching the premiere of a documentary about the fight for justice for Elijah McClain.

Phipps IMAX Theater Reopening
Starting Friday, January 15
Denver Museum of Nature & Science, 2001 Colorado Boulevard
Last week the DMNS reopened the Planetarium; this week the IMAX Theater returns, taking the audience to the middle of the action to explore the newest frontiers in science and some of nature’s wildest places on a three-story-high screen. The lineup includes Hidden Pacific 3D, Into America’s Wild 3D and Superpower Dogs 3D; get the complete schedule and ticket prices here.

"Hope Onto Many"
Starting Friday, January 15, 6 p.m.
Boulder Ballet presents the debut of a five-minute original dance film created by Lance Hardin and Ray Bailey TV, with music by Michael Shulze, in collaboration with Chautauqua in the fall of 2020. It will be released on January 15 and can be streamed through January 31; tickets are donation-based, and all funds go to support Boulder Ballet. Find out more here.

LOOK: Video Plays for Uncertain Times
Starting Friday, January 15, 7 p.m.
Theater 29 and the Lulubird Project have assembled a group of video plays by Iliana Lucero Barron, James Brunt, Tami Canaday, Collin Hood, Amber Irish, Melissa Lucero McCarl, Pamela Nocerino and Matthew Schultz. The theme and parameters of LOOK were devised by Theater 29 creative director Lisa Wagner Erickson to reflect and incorporate pandemic-prescribed means of communication. “I am impressed with how the playwrights and theater artists have incorporated handheld devices into the creative process, using cell phones to rehearse and block their respective video-plays,” says Erickson. The collection will debut at 7 p.m. January 15 at theater29denver.com. The show is free to watch, but Theater 29 encourages you to donate to the Denver Actors Fund. 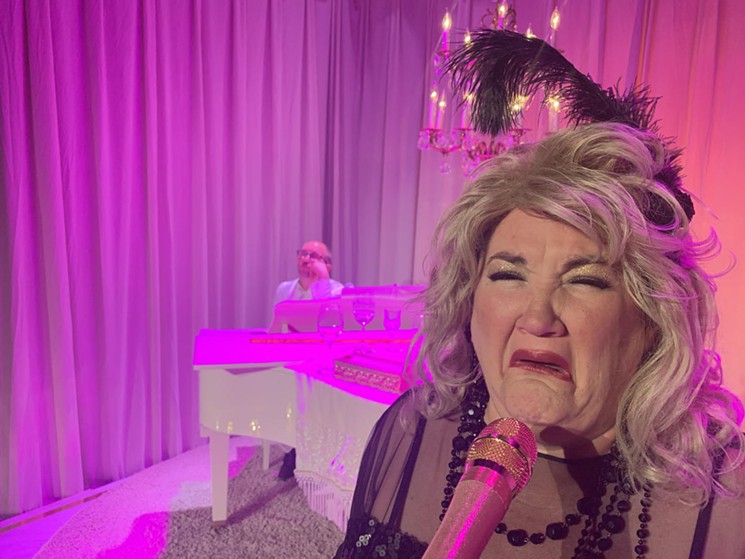 Virtual Orchid Showcase
Saturday, January 16, through January 22
Orchid collectors look forward each year to the annual orchid show at the Denver Botanic Gardens, a jaw-dropping display of delicate blooms. But after COVID-19 changed everything, the event had to be canceled in 2021 — almost. Though it won’t be the same experience, it’ll still be a beautiful one: The Virtual Orchid Showcase, which will be spread ingeniously over the DBG’s social media platforms, not only promises growing tips, trivia and a kaleidoscopic view of rare orchids, but also people at home a chance to share images of their own otherworldly specimens with the online audience via Twitter on Sunday, January 17. Learn more here.
In Defense of Justice in Denver Premiere
Saturday, January 16, 2 p.m.
The National Committee for Justice in Denver is hosting the digital premiere of the documentary film In Defense of Justice; it focuses on the case of Elijah McClain, who died after being stopped by Aurora police on August 24, 2019, as well as the protesters who now face charges for demanding justice for McClain. The viewing is free; register here.

Battle of the Books
Saturday, January 16, 5 p.m.
As part of its Winter of Reading, Denver Public Library presents Battle of the Books with James Mustich, author of 1,000 Books to Read Before You Die. Five local luminaries will battle to advocate for their favorite books, and attendees will vote to name a champion and have the chance to win book-themed door prizes. Joining Mustich: Governor Jared Polis; city librarian Michelle Jeske; Soul Food Scholar and author Adrian Miller; MSU Denver Chicana/o Studies JTOH director and author Dr. Elizabeth Renee Fajardo; and Manuel Ramos, author of Chicano noir crime fiction. Their books will be announced during the event, which is free on Zoom, but you must register here.

Love in the Time of COVID-19: An Apocalypse Cabaret
Saturday, January 16, 7 p.m.
Opera on Tap has been hosting an installment of its apocalypse cabaret every month; the theme for January is "Here's Hoping." The show is under an hour, and interactive: You can chat with the performers. It's free to watch on Facebook, but donations are definitely accepted to keep the shows going and help the group's singers through tough times. Join in here.

From Legacy to Possibility: A Virtual Celebration of Martin Luther King Jr. Day
Sunday, January 17, 10 a.m., through Monday, January 18
The Dairy Arts Center is hosting live programming celebrating MLK throughout the weekend, including a public poetry workshop, virtual slam poetry performances, cinema, music and more! The events kick off with a poetry workshop with Assetou Xango at 10 a.m. Sunday. All programming is free; find a schedule and register here.

Consumed: Tales Inspired by the Wendigo
Sunday, January 17, 6 p.m.
From desolate snowy mountains and apocalyptic wastelands to New York's sex clubs and virtual encounters, the Denver Horror Collective brings you visions of horror inspired by the Wendigo. Headliners Steve Rasnic Tem (Lakewood resident and winner of the Bram Stoker, International Horror Guild, and British Fantasy Awards) and Dana Fredsti (author of the Plague Town trilogy), along with Colorado dark scribes P.L. McMillan and Christophe Maso, will read excerpts from their Consumed stories set to chilling video and unnerving musical backgrounds; other contributors will discuss their works. The event is free; get the Zoom link through DenverHorror.com. 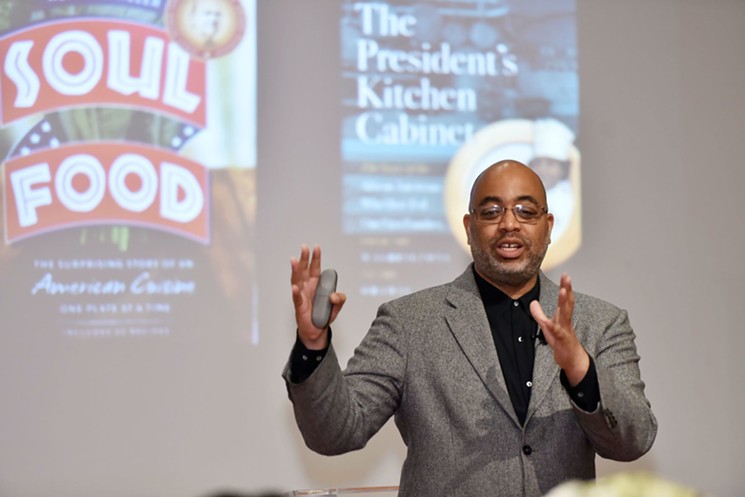 Adrian Miller is busy this month.
DPL
Of the Spirit: Conversation About Faith, Race and Ethnicity
Sunday, January 17, 7 p.m.
Adrian Miller, executive director of Colorado Council of Churches (and a busy man this week) will moderate the third online Changing the Legacy of Race & Ethnicity panel conversation hosted by Colorado Humanities, with Reverend Diana Thompson, a Kaikyoshi minister at the Tri-State/Denver Buddhist Temple; Reverend Joan Bell-Haynes, executive regional minister of the Central Rocky Mountain Region Christian Church (Disciples of Christ); Carlos Zarur, who's taught in the University of Colorado anthropology department and the Jewish Studies Program and is currently finishing his doctoral dissertation on Sephardic Jews in Syria and Lebanon; and Kamel Elwazeir, president of the Islamic Society of Colorado Springs. Sign up for the free program at coloradohumanities.org.

Time Travel Tuesdays: Retro Film Series
Debuts Tuesday, January 19
The Aspen Historical Society and Aspen Film present a new retro film series featuring historic looks at Aspen. The lineup debuts on January 19 with Aspen Before Lifts (1945/46) and Until We Meet in Aspen (1949); sign up for one date for a suggested donation of $10, or get the eight-show series for $60. Learn more at aspenhistory.org.

Know of other great events around town? Send information to [email protected]; we'll be updating this list through the weekend.
KEEP WESTWORD FREE... Since we started Westword, it has been defined as the free, independent voice of Denver, and we'd like to keep it that way. With local media under siege, it's more important than ever for us to rally support behind funding our local journalism. You can help by participating in our "I Support" program, allowing us to keep offering readers access to our incisive coverage of local news, food and culture with no paywalls.
Make a one-time donation today for as little as $1.