Hats are not required at Denver Fashion Weekend. Jim Wills

Vintage Whites Market began as a small garage sale in Montana in 2010.
Courtesy Vintage Whites Market
The Vintage Whites Market, which began in 2010 in Montana as little more than a garage sale with five vendors, has quickly become a major traveling flea market with a caravan of 200 vintage vendors selling retro wares from near and far. Several Colorado businesses will be cut into the mix when Vintage Whites hits the National Western Complex at I-70 and Brighton Boulevard beginning with a VIP early-bird shopping event on Friday, March 31, from 5 to 8 p.m. General shopping runs from 10 a.m. to 5 p.m. on Saturday, April 1; highlights include an appearance by special guest Cari Cucksey of HGTV’s Cash & Cari, a vintage fashion show by Meek Vintage, haircuts and shaves by Piper’s Parlor to keep guys busy and gussied up while the ladies shop, live music, food indoors and out, and miles of aisles of shabby chic. Admission is $25 on Friday and $7 Saturday (early-bird price includes both days; children ages twelve and under get in free). Go to thevintagewhitesmarket.com/colorado for tickets.

There will be no excuse for having nothing to do in Boulder in the coming week: Boulder Arts Week 2017 offers folks a free checklist of cultural events blossoming over the next nine days, from March 31 to April 8. “Boulder has the third-highest concentration of artists in the nation,” notes Arts Week director Emily K. Harrison, and the week’s events showcase places that are brimming with art shows, concerts, plays, movies and performances throughout the year in the shadow of the Flatirons. Boulder Arts Week kicks off with a free opening party at 5:30 p.m. Friday, March 31, at Twisted Pine Brewing Company, 3201 Walnut Street; for a complete list of arts week offerings, visit boulderartsweek.org.

After a brief hiatus, Lucha Libre & Laughs surges back into the ring with color commentators Sam Tallent and Nathan Lund resuming their rightful places in the booth. Referee/producer Nick Gossert has assembled a knockout lineup both in the ring and on the mic to close out March in classic LLL style at the Oriental Theater, 4335 West 44th Avenue, on Friday, March 31. With the comic stylings of Kyle Pogue, Mallory Wallace, Preston Tompkins and headliner Dante Powell, LLC also boasts a heated match that pits Mike Sydal against Denger Dean, and a triple-threat heavyweight championship bout between Caleb Crush, Zema Ion and current title-holder Lonnie Valdez. Doors open at 7 for the 8 p.m. show. Find tickets, $10, at theorientaltheater.com.

April Fool’s Day is for throwing up your hands and giving up trying to make sense of a world that’s always trying to trick you into believing nonsense. Kickstart that process at Party America’s Denver Onesie Pub Crawl, an excuse to dress up in one-piece pajamas or kigurumi costumes and wander from bar to bar with hundreds of your fellow fools. The party runs (and walks, skips and crawls) from 5 to 12 p.m. Saturday, April 1, beginning at the Church, 1160 Lincoln Street, where you can check in from 5 to 7 p.m. before heading out to enjoy drink specials in your PJs at multiple participating venues. Tickets are $15 in advance at partyamericaevents.fwscart.com.

Beyond nourishment, food is a link to the past, a means of carrying on family and cultural heritage. The Fourth Annual Forward Food Summit highlights this aspect of food through education and entertainment. Interactive conversations will focus on indigenous perspectives on food and passing traditions between generations. Organized by the Denver, Boulder and Colorado Springs chapters of Food Rescues, the summit ties into the nonprofit’s mission to deliver fresh produce, by bicycle, to food-insecure neighborhoods in Colorado. The two-day event starts at 9:30 a.m. on Saturday, April 1, at the Mercury Cafe, 2199 California Street. Tickets are $15 to $35, with scholarships available. For more information or to purchase tickets, visit denverfoodrescue.org. Proceeds benefit the three Front Range Food Rescues.

On Saturday, April 1, test your flexibility, balance and sense of adventure with yogini and healer Devine Willerth. To celebrate the grand opening of AIReal Yoga, her new aerial yoga studio, Willerth is hosting a daylong event packed with thirty-minute sample classes, lectures on aerial yoga, and drawings for free classes and goodies. You don’t have to be a devout yogi to get in on the action. With aerial yoga, Willerth explains, “Silk slings allow users to get inverted with ease, without putting pressure on the joints.” The result? “Practitioners get into the body on a really deep and centered level,” Willerth says. “It’s safe and supportive — plus it’s fun.” AIReal Yoga classes will run every 45 minutes, 10 a.m. to 5 p.m., at Sukha Healing Arts, 77 East Vassar Avenue. Class space is limited; reserve a spot in advance online for $10 at vagaro.com/sukhaheals/online-scheduling.

Inspired by an unsent love letter back in 2002, Mortified has spent the past fifteen years expanding, with outposts cropping up everywhere from Austin to Oslo. Combing through the detritus of adolescence, Mortified scours the world for old poems, journals and even home movies, and lets their owners showcase them on stage. Hailed by This American Life, The Today Show and the AV Club, Mortified unites its listeners in gratitude that their teen years are behind them. We can think of no finer way to celebrate this April Fool’s Day than commiserating with Mortified’s embarrassed speakers on Saturday, April 1, at 8 p.m. at the Boulder Theater, 2032 14th Street in Boulder. Tickets, $18, are available at bouldertheater.com.

Giving blood isn’t particularly funny, especially if you’re squeamish about watching your own veins get sucked dry. But it is an honorable and generous act, which is why Bloodlines: Blood and Punchlines aims to also make it fun for you. Bloodlines, a comedy showcase in partnership with Bonfils Blood Center, will bring a dozen Denver comedians to VFW Post 2461, 1350 South Broadway, from 11 a.m. to 3 p.m. on Saturday, April 1, to entertain folks before or after they roll up their sleeves; anyone feeling particularly jovial can even sign up to be bone-marrow donors. The laughs start up at noon (a $5 donation is suggested); call 720-838-3980 or visit facebook.com/events/1920493288172687 for details. 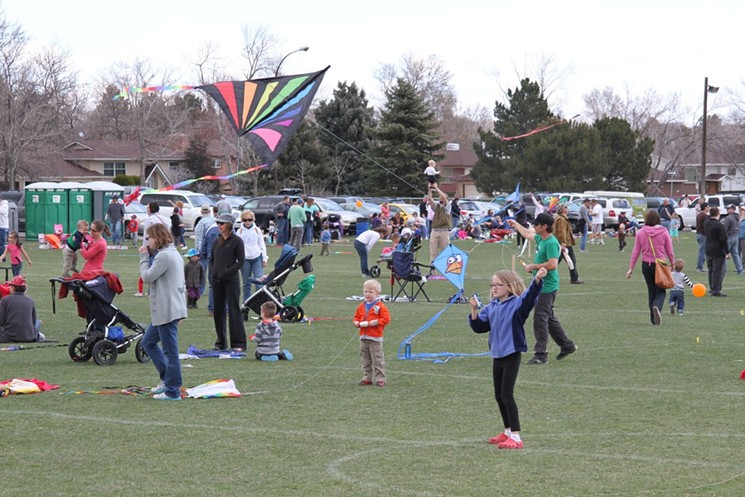 Get swept up in free fun from 10 a.m. to 3 p.m. on Sunday, April 2, at the sixteenth annual Arvada Kite Festival, held at the Stenger Soccer Complex, 11200 West 58th Avenue in Arvada. Attendees can bring their own kites, buy new ones from on-site vendors, or simply watch high-flying exhibitions from professional flyers. Little ones can burn off their surplus energy in the Fit2beKids Kids’ Zone, where they can complete a speed and agility camp, jump for joy in a bouncy castle and roll around in human-sized hamster balls. With shopping, face painting and a range of food options, the Arvada Kite Festival soars to the highest heights of fun. Learn more at arvadafestivals.com.

Su Teatro’s annual four-day XicanIndie Film Fest has long been the place for cutting-edge works by independent Chicano filmmakers, as well as works of world cinema that rarely make the local multiplex. That makes it the perfect venue for Clever, a poignant study of the life and work of Gerardo Lopez, a former gangbanger with L.A.’s notorious MS13 who now works as a gang interventionist in Denver. Local documentarian Alan Dominguez (The Holes in the Door) deftly traces his subject’s battle for survival on the mean streets and the events that led up to his break with gang life. Lopez will be on hand for a question-and-answer session after the screening, which kicks off at 2 p.m. on Sunday, April 2, at Su Teatro, 721 Santa Fe Drive. For tickets, $7 to $10, call 303-296-0219.

Throughout the tumultuous rise and fall of yacht-rock superstars Hall & Oates, guitarist and backup singer John Oates documented his experiences in handwritten journals. These formative scribblings form the basis of his new memoir, Change of Seasons, a thorough account of his career, replete with a songwriter’s flourishes. On Monday, April 3, at 6 p.m., the Rock and Roll Hall of Famer will be at the Tattered Cover, 2526 East Colfax Avenue, for a reading, book signing and meet-and-greet. The $29.99 ticket, available at eventbrite.com, includes a copy of the book. Find out more at tatteredcover.com.

Curmudgeon historian Phil Goodstein returns to City Stacks Books & Coffee, 1743 Wazee Street, on Monday, April 3, for Denver History Night, an ongoing lecture series that focuses on a different formative era each month. This month, to mark the centenary of World War I, Goodstein will deliver a lecture detailing the Great War’s impact on the home front, particularly how the pro-war propaganda campaign came to influence both public policy and discourse. The lecture begins at 6 p.m., and admission is free. Learn more at facebook.com/events/221897568284340.