Review: The Diary of Anne Frank a Triumphant Tearjerker at Arvada Center 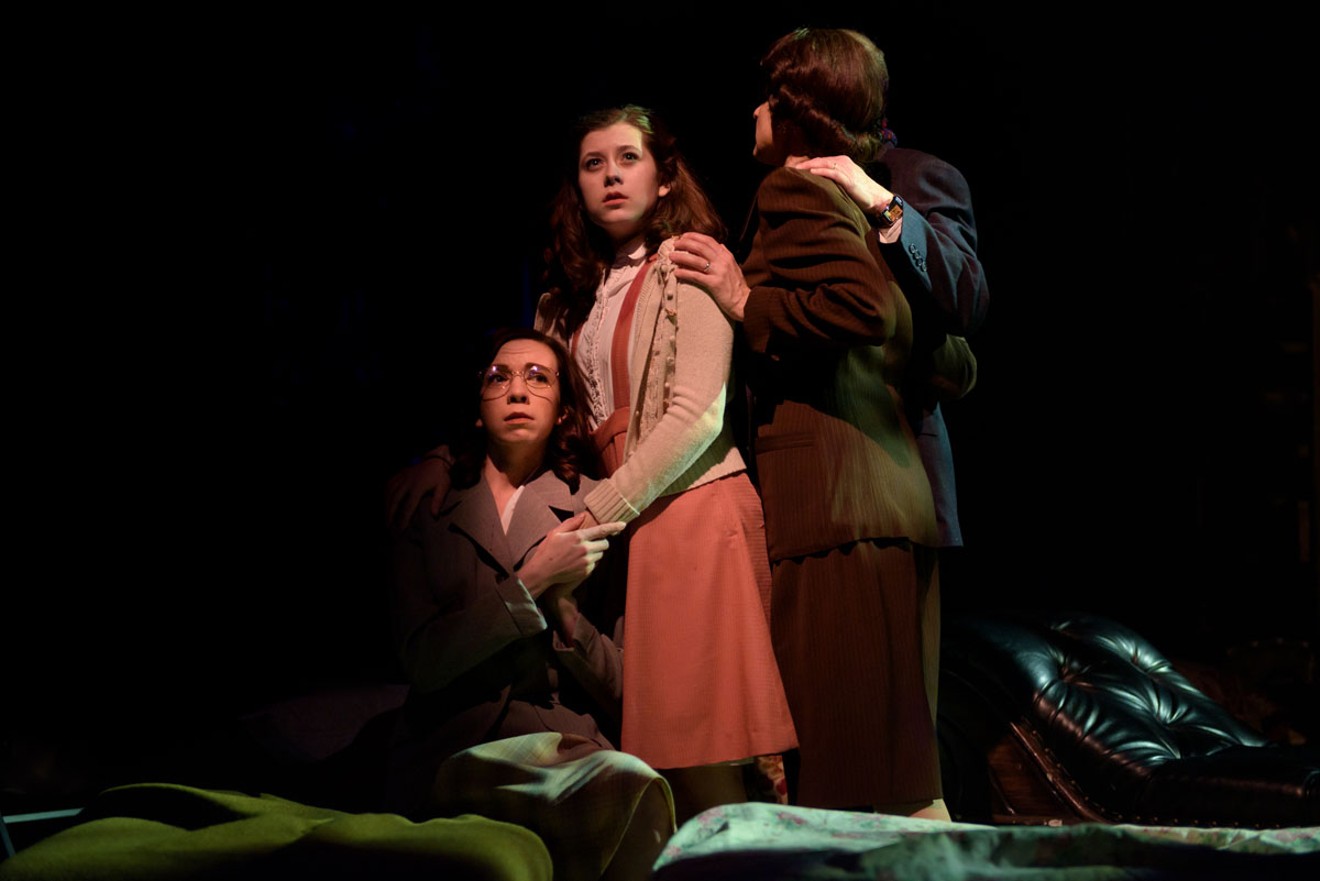 Annie Barbour, Darrow Klein, Emily Paton Davies and Larry Cahn in The Diary of Anne Frank. Matthew Gale Photography
Almost everyone knows the story of Anne Frank, the young Jewish girl who hid from the Nazis with her family in the secret annex of a building on an ordinary street in Amsterdam, and the diary that kept her soul — and her story — alive. Anne and her parents, Otto and Edith Frank, and her sister, Margot, shared the space with their neighbors, Mr. and Mrs. Van Daan and their teenage son, Peter. A little later, a terrified dentist, Mr. Dussel, sought shelter there. Eight people were crammed into the tiny space, forced into silence through the daylight hours, sharing a single toilet that could only be flushed after dark. Added to the tension was the shared knowledge of what was happening outside and the sounds of German voices, BBC news reports and Allied bombings.

The Diary of Anne Frank reveals the inner life of a bright, precocious girl, full of life, inchoate longings and contradictions. At the beginning she’s thirteen, all irrepressible id, but as she matures, she becomes gentler and more thoughtful, ruminating about what it means to be Jewish, speaking of sex, her body — and the feelings beginning to stir for Peter.

There are flaws in the script (adapted by Wendy Kesselman in 1997 from the original 1957 version by Frances Goodrich and Albert Hackett), but it’s hard to imagine a better production than the one directed by Christy Montour-Larson at the Arvada Center. I had seen the play before, but this is the first staging that brought tears to my eyes. Those tears were a response to the horror of the war and what we know about Anne’s fate, of course, but they also arose unexpectedly for the daily griefs of the annex inhabitants: the usually decent man so hungry he steals bread meant to be shared; the woman clinging to the luxurious fur coat that represents her sole connection to the life she’s lost; the tremulous, neurotic dentist whom Anne loathes and no one else particularly likes. In short, the daily squabbling and humiliation of people robbed of privacy and a sense of individual identity.

The problems with the script are particularly noticeable in the second act. The scenes between Peter and Anne have no juice or sexual tension; they simply don’t sound like exchanges between young people. Other scenes feel dated or obvious. The moments that spark are often the unexpected ones, those that force us to realize that, yes, these are real people behaving the way real people do when cramped and trapped.

There are many good things about the production — set, lighting, costumes — but its primary power comes from Montour-Larson’s cast. Darrow Klein is as perfect an Anne as I can imagine, never playing for pathos. Larry Cahn is a gentlemanly Otto, and Emily Paton Davies shines quietly as his anxious wife, Edith. Frail and quiet, Annie Barbour’s Margot hovers in the shadow of her younger sister. Daniel Crumrine is an appealing Peter. Then there are the helpers: Lance Rassmussen is entirely convincing as conventional and very European Mr. Kraler, and Regina Fernandez charms as brave Miep Gies. Zachary Andrews’s Mr. Dussel is irritating, self-serving and so vulnerably human that you ache for him. The Van Daans have some of the best-scripted action, but it doesn’t hurt that they’re played by Abner Genece and Emma Messenger, actors who add depth to any production they grace. It was when Messenger’s Mrs. Van Daan, vain, materialistic and irritating — for heaven’s sake, the woman flirts with upright Otto — lists for her unhappy husband the delicious foods she’ll cook for him after the war that my tears began.

My only quibble with Montour-Larson’s direction is how she handles the ending. It’s terrifying enough when soldiers erupt into the annex; you don’t need slow-motion movement and black masks. Otto’s recitation of the characters’ fates would be more moving if delivered low and quiet rather than tear-drenched. I lived my childhood among Holocaust survivors, and I know how most of them spoke of their dead. These people couldn’t afford to cry. And could someone please kill the rising swell of song ending the show? Silence and darkness would be enough.

The Diary of Anne Frank, presented by the Arvada Center’s Black Box Repertory Theatre through May 19, 6901 Wadsworth Boulevard, Arvada, 720-898-7200, arvadacenter.org.
KEEP WESTWORD FREE... Since we started Westword, it has been defined as the free, independent voice of Denver, and we'd like to keep it that way. With local media under siege, it's more important than ever for us to rally support behind funding our local journalism. You can help by participating in our "I Support" program, allowing us to keep offering readers access to our incisive coverage of local news, food and culture with no paywalls.
Make a one-time donation today for as little as $1.