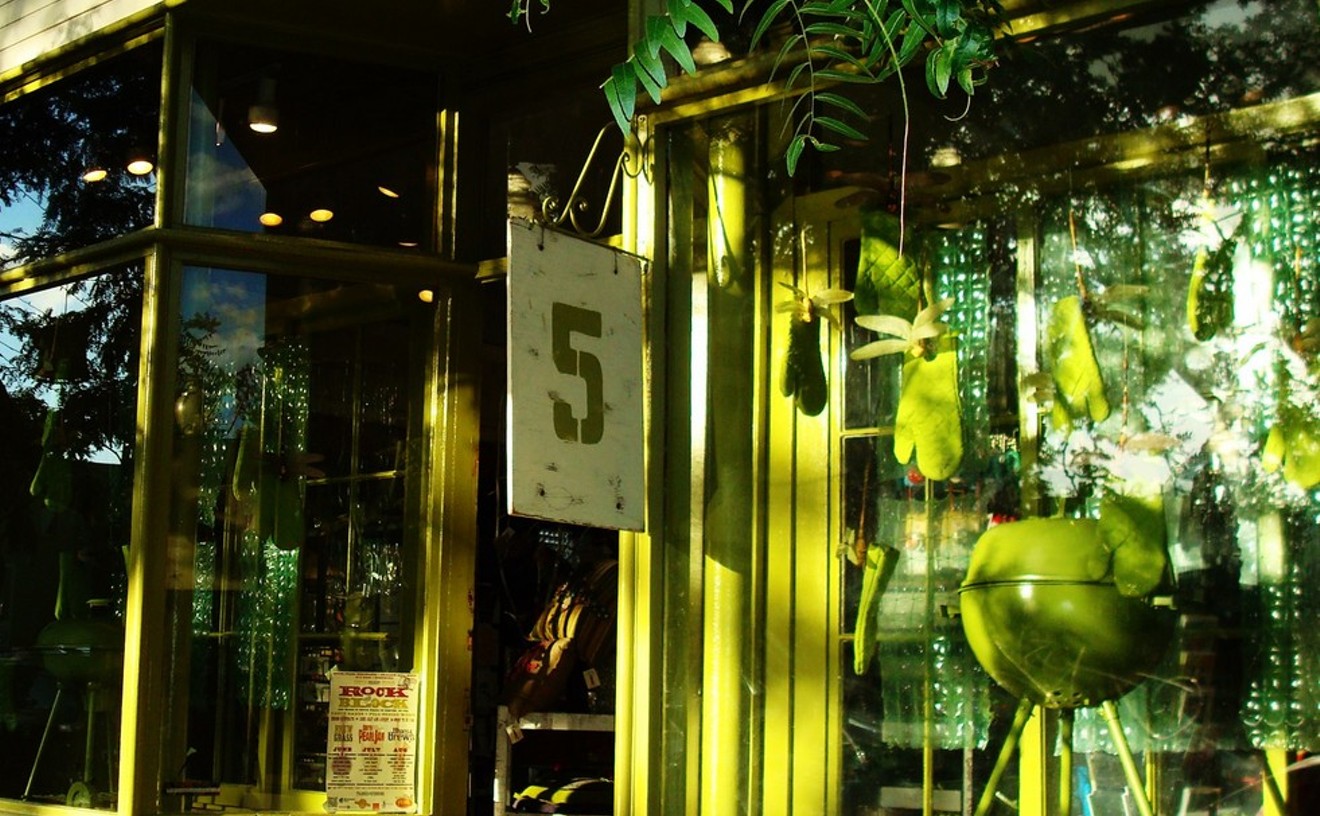 Charlotte Elich, the powerhouse muse behind 5 Green Boxes, seems to have been born putting things together in a pleasing way, and her sensibilities are in full swing when she tackles her window displays each season. Elich is a genius of dreamy whimsy, blowing up vintage clip art into mystical creatures "riding" a rusted bicycle and long-dead Victorian ladies who grasp big red hearts at Valentine's Day. At Christmastime, a herd of deer might be found traveling through, and at Halloween, tutu-clad muertas might dance a clacking jig. Plus, her affinity for turning unlikely objects — pink rubber gloves, perhaps — into something funny and engaging is masterful. No matter what she comes up with, the purpose of drawing people inside always seems to be served.

Debuting this month, Denver Public Library's ambitious Creating Communities project is nothing less than the creation of a vast virtual storehouse of info on Denver's neighborhoods and quirks, consisting of thousand of digitized photographs, assessor records, city directories, maps and more — all readily accessible to folks interested in uncovering the history of their block or their town. One section, myDENVER, invites participants to upload their own photos, reminiscences and research inquiries. 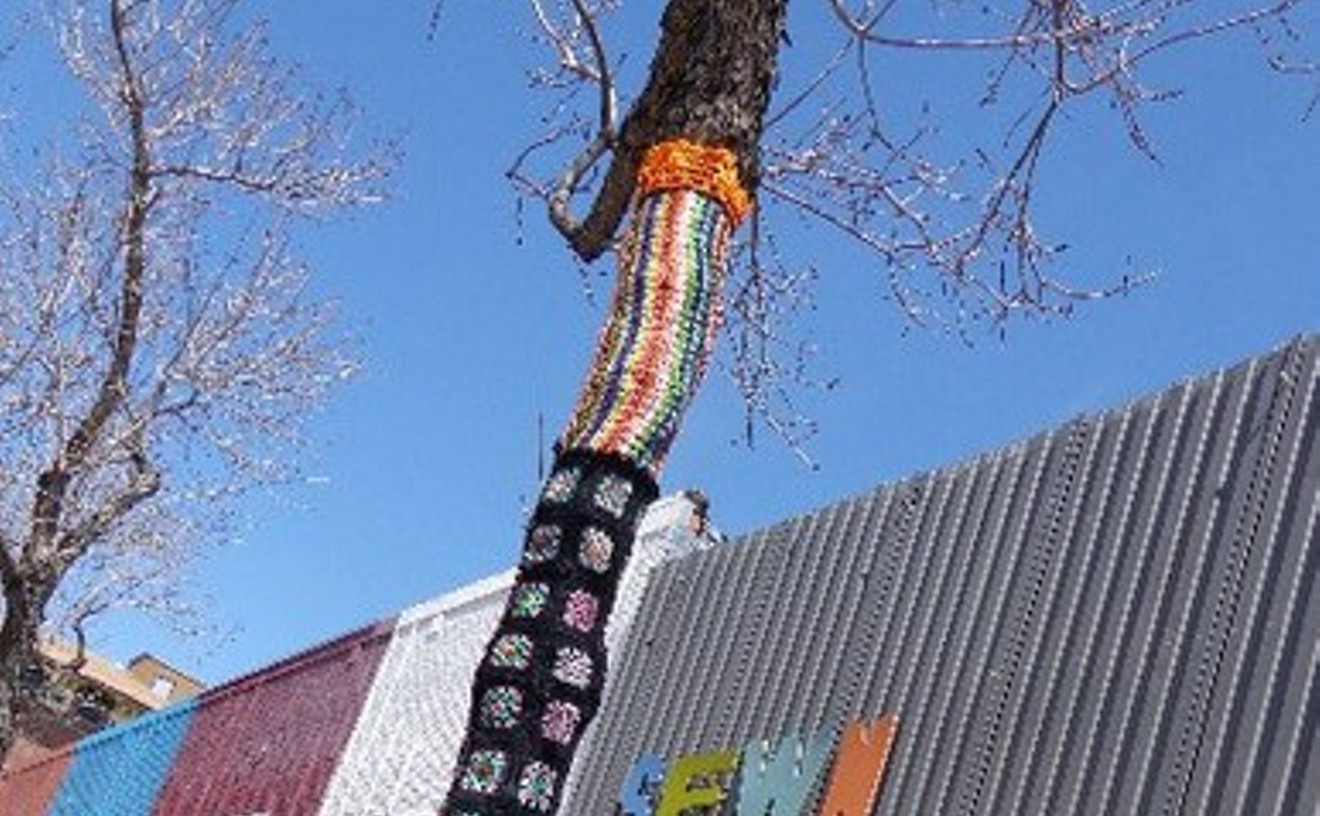 It feels as if friends and colleagues Jil Cappuccio and Kirsten Coplans, both talented seamstress/upcyclers, have been working toward opening SEWN together for a long time; the two have been recognized in the local retail fashion scene as a team for some time, sharing craft-show booths and pop-up boutiques to sell their wares. And once they discovered how well their particular lines go together, they merchandised them as mix-and-match partners, easily accessorized with one of Jil's whimsical tapestry bags or their shared passion: an array of vintage Frye or cowboy boots. Since then, they've worked pieces by other designers into the mix. But this kismet goes even further than that when you consider the neighborhood shift that allowed Cappuccio and Coplans to hang the SEWN shingle over their door at 18 South Broadway, former home of Fancy Tiger Clothing, which moved up the street. As a result, SEWN, which opened at the end of January, not only ups the overall vibe of the street, but also brings a new level of cozy comfort by offering clothing that's original and trendy without being the least bit pretentious or body-conscious. Welcome to the neighborhood. 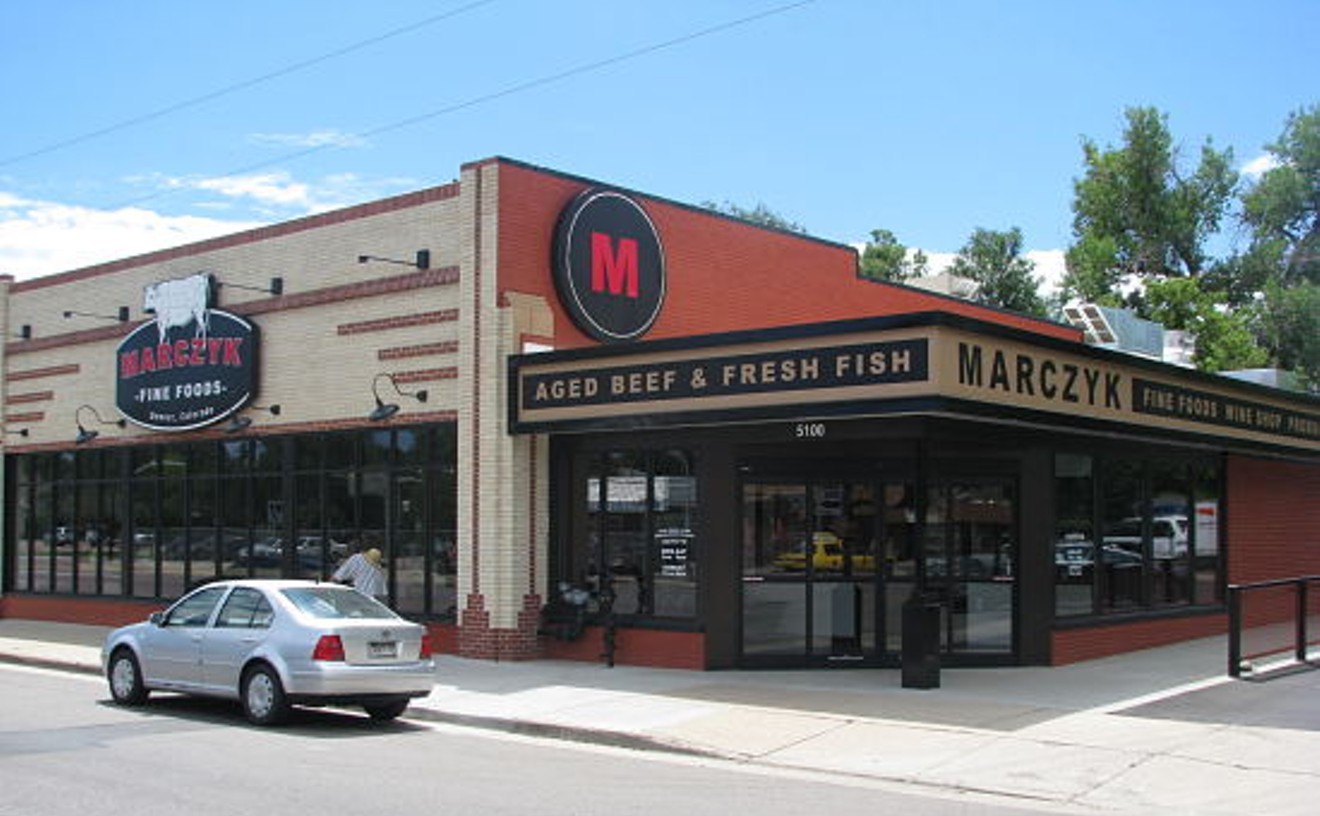 Almost a decade after the first Marczyk Fine Foods opened in Uptown, the same crew opened a second store last summer at the corner of Colfax Avenue and Fairfax Street, in a circa 1925 building that had once been a Safeway, then a hardware store. The stunning renovation has already won awards: The structure was stripped to reveal its arching wooden ceiling and seems bigger than the original store, although it's actually a bit smaller. Like the first Marczyk, it features a small liquor store — the 875-square-foot Fairfax Wine and Spirits, which has the original oak floors — but the rest of the space is devoted to a full deli with market-prepared meals, fresh meat and seafood counters, and sparkling displays of fresh produce and specialty items. Just as impressive as the interior, though, is how the store has revitalized this stretch of Colfax. Outdoor seating by the parking lot encourages shoppers to sit and enjoy their purchases — as well as all the sights of Denver's colorful main street.

We're all for shopping local, but there is and long has been a demand among city-dwellers for stylish and affordable garments of the sort sold by the Swedish-owned department store H&M, which was, after all, the Holy Grail for thousands of Denver fashionistas before the retailer opened last year in the downtown mall. So let's celebrate that, too. H&M brings a certain savoir faire to our civic image and keeps folks with little cash looking like a million bucks to the rest of the world. 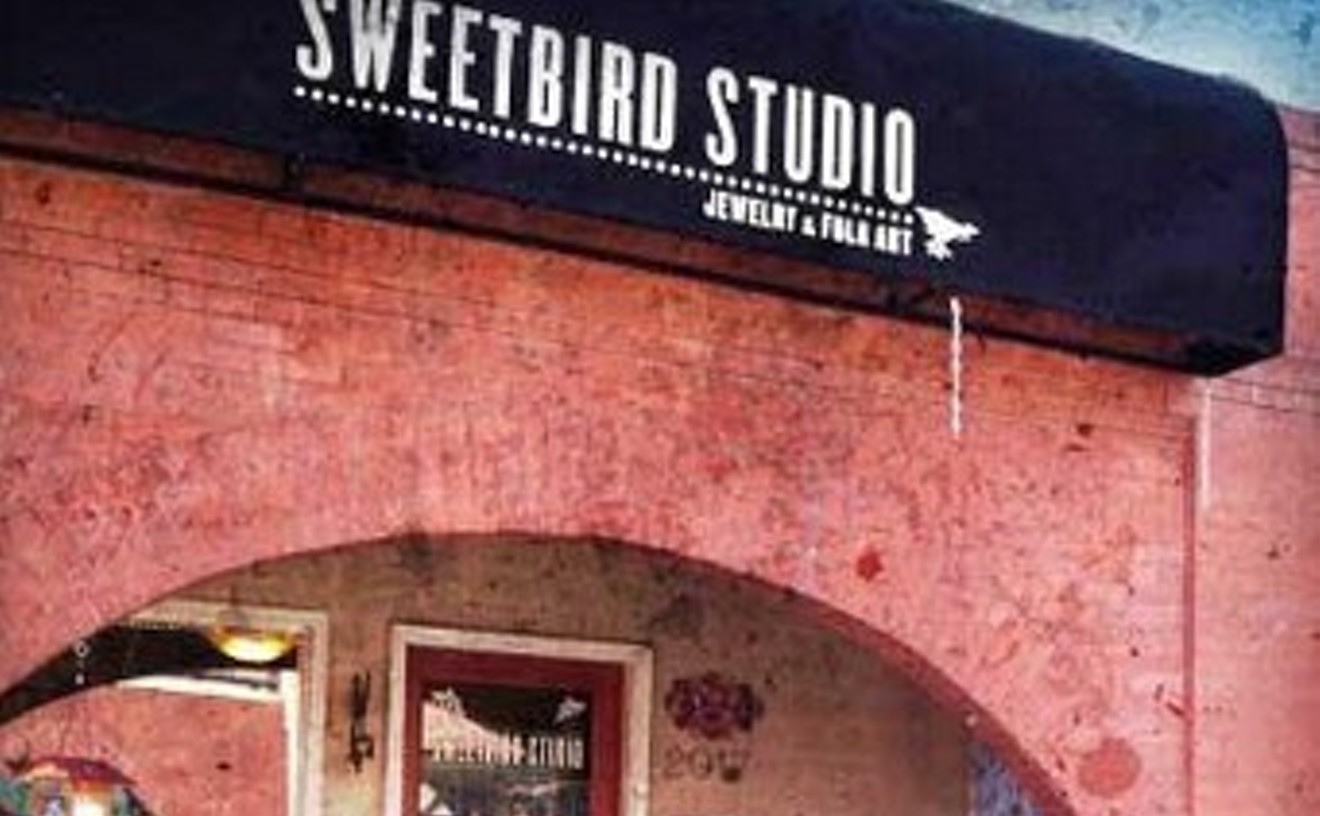 Though technically not on Pearl Street proper, Sweetbird Studio is right around the corner, and we're glad it is: Dedicated to the "wearable shrines of intention" created by Boulder jewelry artist Nancy Anderson, the shop is home to one-of-a-kind retro-cowgirl pieces she crafts from found objects, stones and sterling silver. They have to be seen to be believed, and lucky for us, Anderson has a retail shop. That's worth turning the corner for! 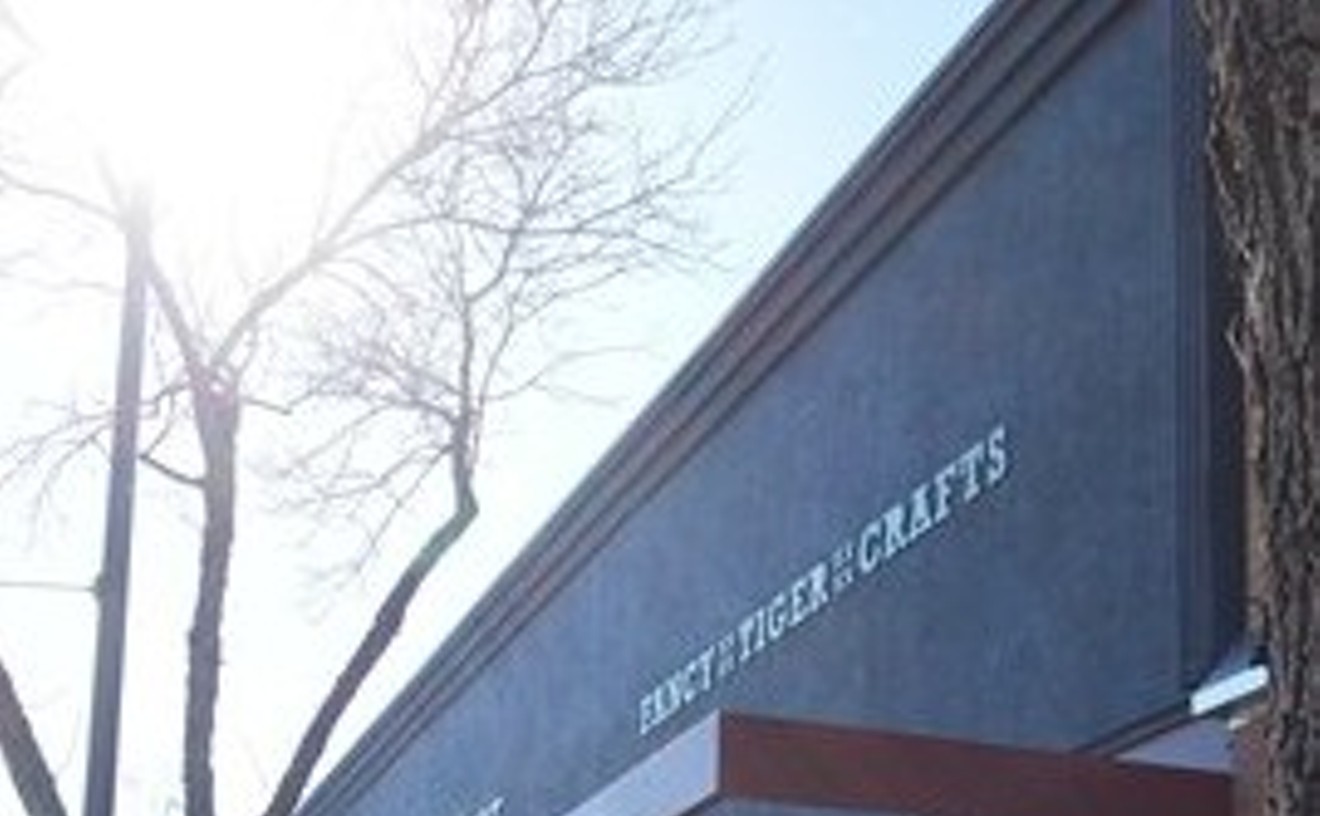 The banding together of hip resale giant Buffalo Exchange and the Fancy Tiger empire of clothing and craft stores on this half-block of Broadway, complete with a small parking lot, is a perfect example of new urban merchandising. It gives people a reason to stop, shop and — just maybe — continue down the street to see what else is there. Dubbing it Tigalo, a whimsical name that combines Tiger with Buffalo, gives it even more curb appeal. These three stores, after all, were made for each other; together they create a kind of funky multiplex that brands the rest of the neighborhood. And by moving its two shops next door to each other in a larger space, Fancy Tiger also made way for the new boutique SEWN to join the Broadway lineup. All that moving around is creating a stronger retail district, and we think Tigalo is its strongest link. 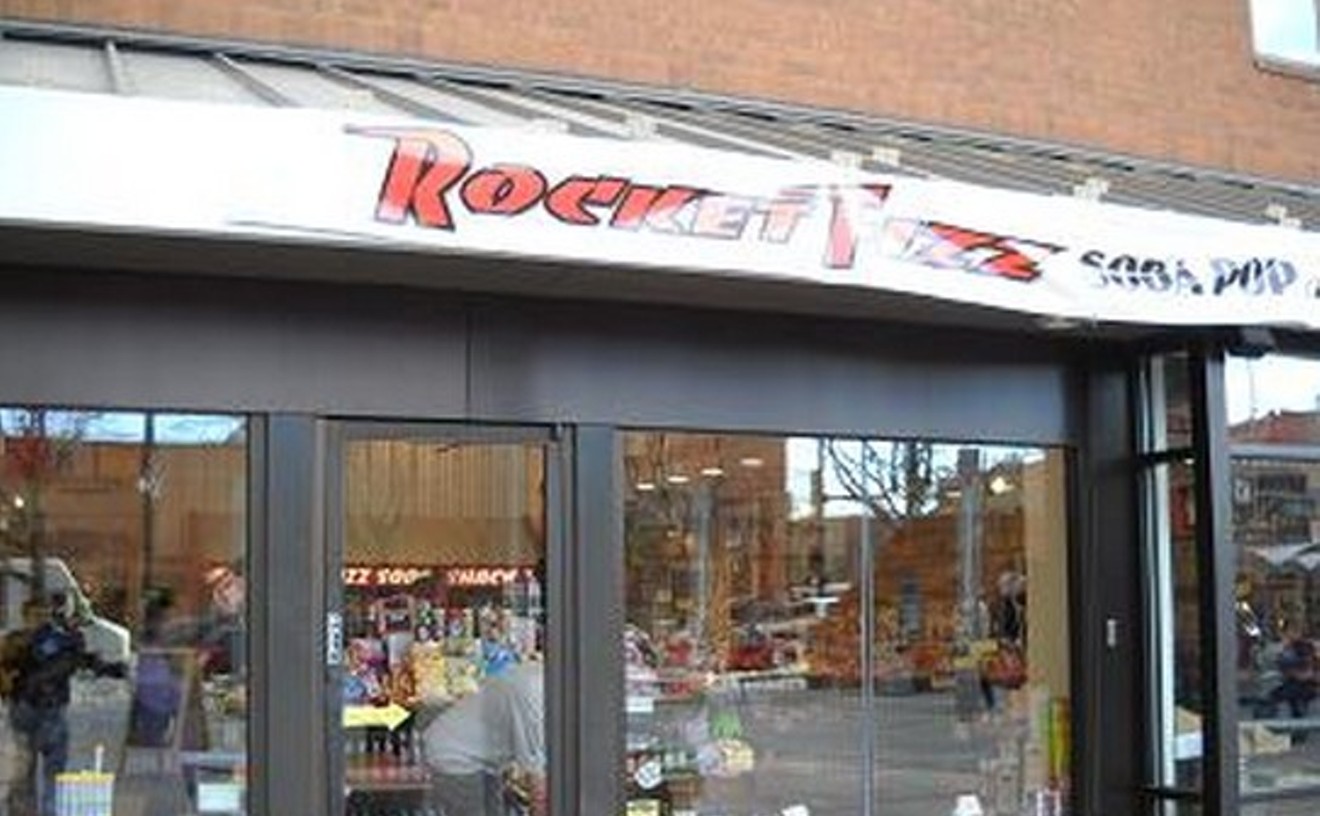 Forget Proust's madeleine. For many of us, a search for things past is a quest for a candy-soaked childhood, and Rocket Fizz has all those elusive treats, from Zagnut bars to giant wax lips to those fake cigarette packs of gum that set you on the road to hell. The impressive chain opened a spacious store in Writer's Square earlier this year, and independent operator Patrick Evans has the place well-stocked with vintage signs, rare sweets, exotic sodas, taffies and suckers, and an astonishing array of Japanese strangeness. Bacon soda, anyone?

Home renovation materials, large appliances and furniture aren't cheap, but Habitat for Humanity's metro Denver thrift store lets customers pick and pull everything from lumber to light fixtures at huge discounts. Since 1979, store profits have made it possible for all donations to fund Habitat's homeownership program for low-income families. Donations of cash, materials or appliances to the store are tax-deductible, and there's even a deconstruction team that will travel to homes or businesses to take salvage items at no charge. The store itself is a treasure trove of inexpensive building materials, home improvement and decor items, tools, vintage and newer washers, dryers, refrigerators, dishwashers and the occasional convection oven. Inventory changes every day, and the staff is always willing to help load or unload the heavy stuff.

This fresh Cherry Creek North storefront is all about going green: A forward-thinking lost-and-found of furniture and other items crafted from reclaimed materials of all kinds, the project of owners Daniel Louis and Keir Myers opened last spring, and it'll make you rethink everything you ever thought you knew about home decor and design. The pair has found uses for just about anything under the sun: marble countertop remnants, tin ceiling tiles, compressed wood scraps, old window frames, barn wood, wine barrels and fence pickets — you name it, they've used it well. And that's just the furniture. On a smaller scale, you'll also find handbags fashioned from vintage car upholstery, coasters cut from vinyl records and chairs hammered out of old street signs; they also offer patio furniture made from construction-site scraps. In the 21st century, what's old is new.