Angelo's, which got new owners and a complete renovation in 2013, may have changed from a pizza joint to a Taverna, adding a swanky oyster bar in the process and many more new menu items, but it still occupies the same spot where Angelo's has been for forty years, in the same neighborhood, with the same distinctive stained-glass windows. And in addition to those oysters — offered fresh and grilled, with some amazing toppings — it still slings pizza, ravioli, lasagna, spaghetti and meatballs and other comforting, traditional Italian dishes, which is saying something in a town that has been losing its red-sauce joints at an alarming clip over the past few years. Twirl your fork through some pasta and marinara and enjoy a little Denver history. 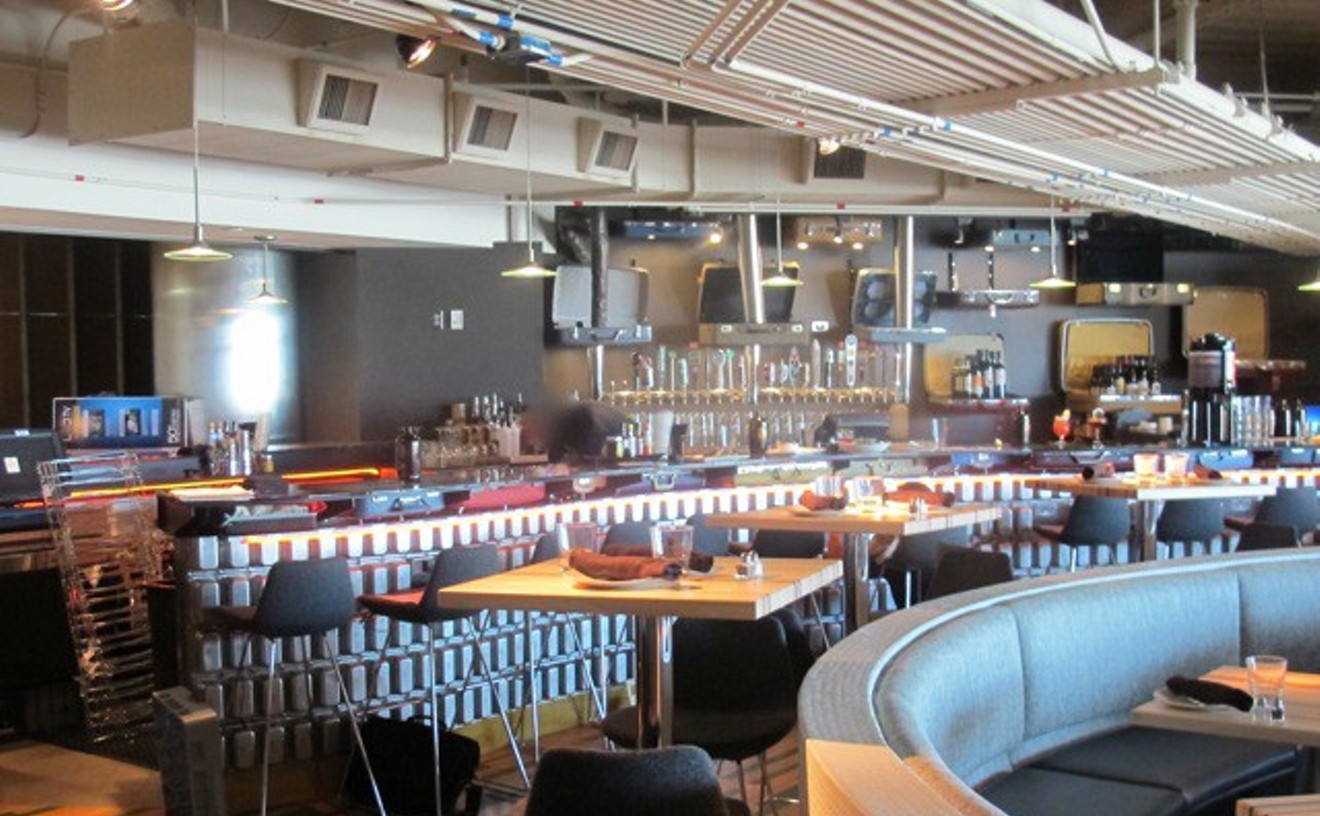 Over the past few years, Denver International Airport has worked hard to make sure that travelers can get a true taste of the city. And their efforts paid off last year when several excellent hometown restaurants opened at DIA. The best of them? Root Down, which not only offers many of the "field-to-fork" menu items that made Justin Cucci's original eatery in LoHi such a hit — including great veggie and lamb burgers — but decor flavored with the same wry, international eye. Don't miss the vintage carry-on cases — packed with accessories from the era — under the glass-topped bar, the collection of globes, and the thoughtful seating for solo diners: little cubbies looking out over the big windows. DIA's Root Down is a soaring achievement.

Falling Rock Tap House is decorated with hundreds of beer bottles — but that's not even the most impressive part of its glassware. For years, this craft-beer bucket-list spot has boasted a bottle list that includes rare Belgian specialties, ever-rarer craft-beer delights, and bottles that you can't get anywhere else in Colorado, like the ones that owner Chris Black brewed in conjunction with various breweries in other states. You can also try several vintages of some beers to sample how beer changes as it ages. Pop your top at Falling Rock.

And in this corner, and still the heavyweight champion of Colorado...Falling Rock Tap House! Craft-beer bars have proliferated over the past five years, popping up everywhere from Colorado Springs to Boulder to Fort Collins, but Falling Rock remains the king, both in terms of numbers — more than eighty taps — and variety of craft beers available. You'll find the best, the rarest, the oldest, the newest — but no crap on tap — at Falling Rock. 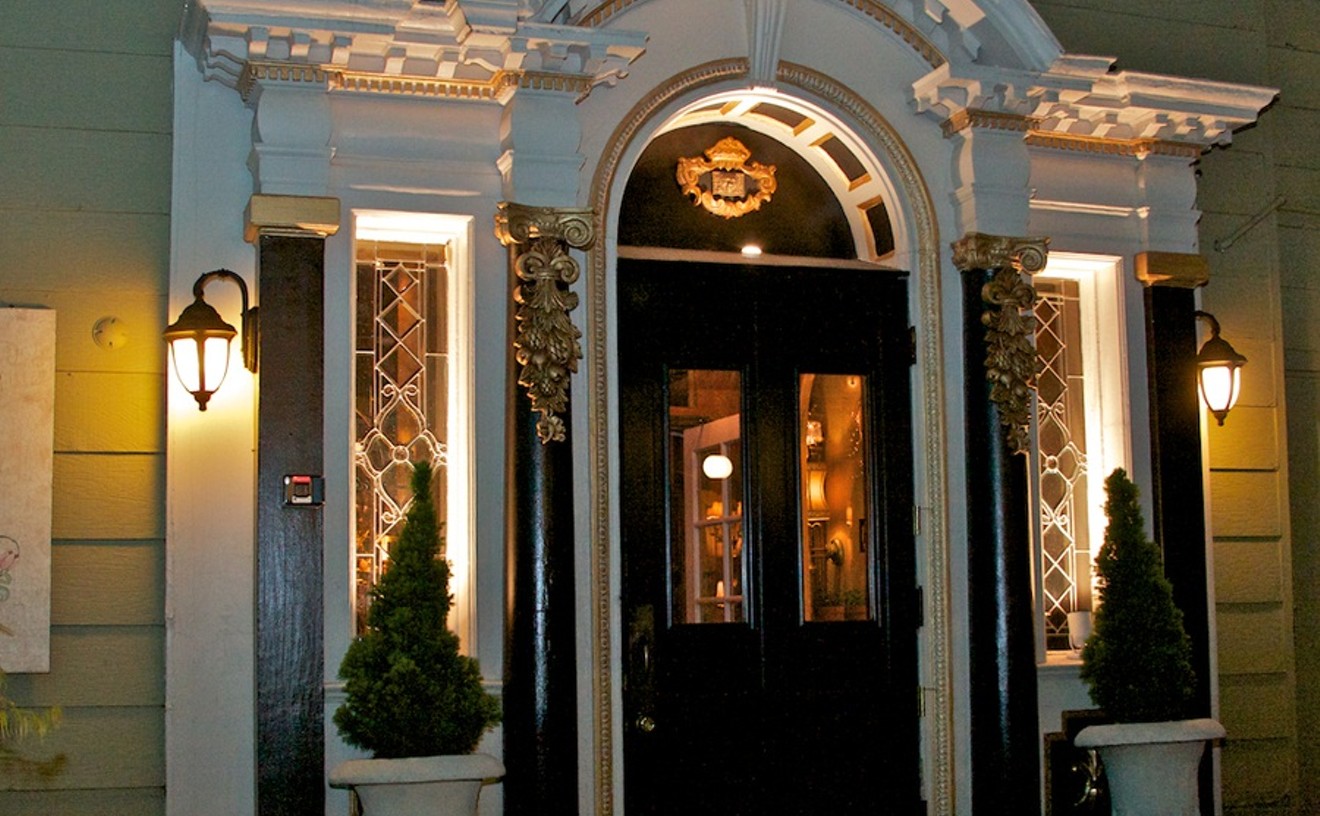 From the outside, the Black Crown looks like a ridiculously adorable home, and the inside is jaw-droppingly opulent, with extravagant chandeliers, stately sofas draped with shawls and enough antiques to outfit an antique store. There are two smashing outdoor patios — the one in back is ideal for canoodling — as well as a bona fide piano bar that features everything from sexy burlesque and cabaret to solo artists belting out show tunes and standards. The fetching cocktail list is geared toward refined boozing, and the witty, locally driven menu anticipates every imaginable food mood, with truffled pâté, beef Wellington, honey-smoked salmon mousse or a simple cheese plate. The Black Crown rules Broadway with that increasingly rare combination of polished and playful.

Amid the tattoo parlors, fluorescent-lit liquor stores and celestial shops that promise to predict your future squats Solera, chef-owner Goose Sorensen's longstanding — and beautifully mature — restaurant. A jovial bar occupies one side of the space, providing a gathering place for spirit disciples to sip bartender superhero Matty Durgin's updated cocktails and oenophiles to explore the world-spanning wine syllabus — a list that's both familiar and whimsically eclectic. The other side is a romantically rustic dining room full of dark woods and pops of color against the white linens, where gracious servers deliver such delicious dishes as paella assembled with plump clams, fleshy mussels, slices of Spanish chorizo and saffron-scented rice. Or share that paella on the patio, an enchanting sanctuary inspired by picture-postcard-perfect courtyards along the Mediterranean that will transport you far from Colfax.

There's no shortage of Mexican restaurants on Federal Boulevard, but Tarasco's is something special. While the tiny corner joint may not have all the frills of fine dining, the service is as warm and accommodating as at any starred restaurant in town. And every dish on the menu shines, no matter how simple the preparation. Grilled nopales (cactus paddles) come on a wooden board with a thin but tongue-blistering sauce. A humble vegetarian corn tamal rises to the level of haute cuisine with nothing more than a drizzle of Mexican crema and a hint of salsa verde. A seven-chile mole cloaks tender chicken or pork with richness and complexity while avoiding cloying sweetness. Tarasco's also cooks up an equally delicious but slightly tangier green mole and a rare yellow mole; go with friends to try them all. And despite the lack of a liquor license, beverages are well covered by a roster of fruit and vegetable juices and smoothies.

When your city is one of the sunniest in the country, it's no wonder that restaurant patios are filled with diners soaking up the rays — even in the doldrums of winter. For a real oasis of outdoor tranquility, stop by Sassafras, a lovingly restored, porch-wrapped Victorian that offers breakfast and lunch daily. The stone-cobbled courtyard is filled with mature trees that sway with the breeze, pots of all sizes planted with rainbow-hued blooms, and shade-yielding umbrellas over tables and rustic wooden benches. It's an idyllic setting for feasting on the kitchen's delicious Southern-style dishes, which taste even better with the sun on your shoulders.

The most notable wine lists are crafted by serious grape geeks who determinedly seek diversity, deftly compiling syllabi that feature both esoteric and safe choices and offer value in every price range. When Bob Blair, chef and owner of Fuel Cafe, introduced his vino roster in 2008 — the year Fuel opened — it was short, crisp, and perfectly fine, but over the years, that scroll has grown into an unbelievably impressive and fascinating global selection, stamped with beautifully chosen bottles that represent a swell of grape types: riesling and gewürztraminer, muscadet and malbec, syrah and pinot noir, carménère and carignan, and gamay — and that's the abbreviated version. For a restaurant that excels in the kitchen, it's only fitting that there should be a wine list to match. Fuel uncorks funky but approachable surprises and delights from interesting producers — and nothing is poured with pretense or contempt.

Courtesy The Bagel Deli Facebook
Many places claim ownership of the Reuben, New York's prized gut bomb, but in Denver, no one does it better than the Bagel Deli, an iconic joint owned by Rhoda Weiner and husband Joe Kaplan. Their Reuben, a grilled, full-figured sandwich stuffed with melted Swiss and hand-sliced corned beef that's flabbed with just the right amount of fat, is pure dazzle, and while the corned beef alone is worth the price, even the tangy sauerkraut, drained so that the seeded rye holding it in doesn't become soggy, is noteworthy. The sandwich's mile-high size makes it entirely too lofty to shove into your mouth, which means that you'll need to eat it sideways, or with a knife and fork. And even then, you'll waddle out with leftovers for a midnight snack.