In Personal Portrait, Rose McGowan Turns to E! to Recruit Her Army 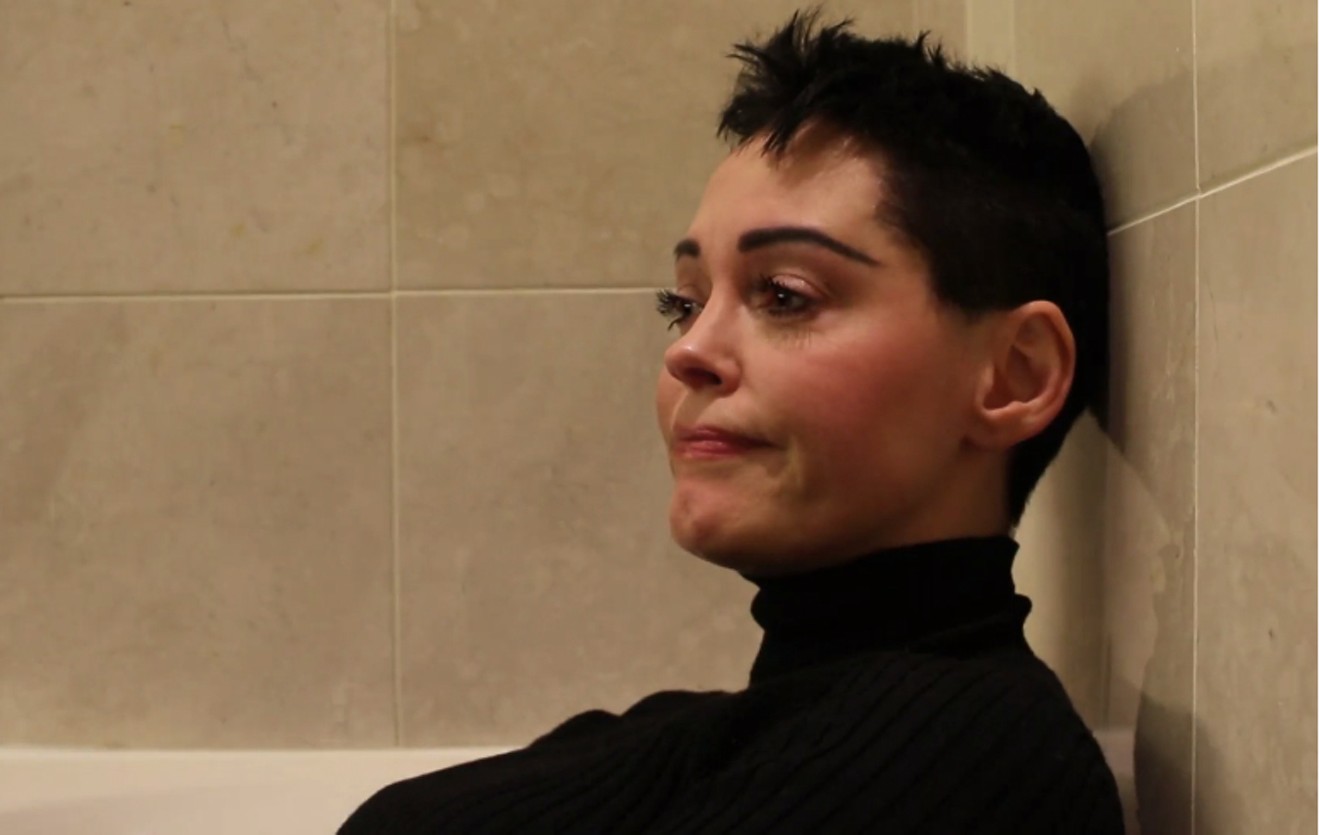 Actress Rose McGowan appears in the E! documentary Citizen Rose, an extremely personal portrait of Harvey Weinstein’s loudest accuser in the weeks following the outpour of rape and assault allegations against the once-powerful producer. Screenshot
Citizen Rose airs on E!

Earlier this month, at the Television Critics Association press event in Los Angeles, Rose McGowan and a team of producers assembled for a panel on the E! documentary Citizen Rose, which premiered Tuesday night. Usually these panels are preceded by a sizzle reel of highlights or a short video introduction from a performer. McGowan’s clip was different. She spoke directly into what appeared to be a laptop webcam, which cut off her face so you couldn’t see her eyes. In a low but emphatic voice, she implored the roomful of critics to be respectful — and to refrain from uttering the name that we were all thinking. As she spoke, images of McGowan dancing listlessly in a sheer white dress began to overlap the webcam video. A friend later told me she heard a couple of dudes sitting behind her snickering throughout the clip.

Sure, those guys were pricks. But I have to admit, I found myself fighting that same gut reaction to Citizen Rose, an extremely personal portrait of Harvey Weinstein’s loudest accuser in the weeks following the outpour of rape and assault allegations against the once-powerful producer. “Do I make you uncomfortable?” McGowan asks in voiceover at the start. “Good.” Her face fills the screen — properly framed, this time — and she stares at the camera head-on, fingers swiping below her eyes as if erasing phantom tears. Swarming the image are overlapping visions of a younger McGowan, in different roles throughout her early career — “The one you’ve read about,” she narrates. The whole thing has an ambient, art-school feel; I half expected her to start painting a canvas with her period blood.

At times she might come across as unhinged. When Amber Tamblyn visits her in a New York hotel room, McGowan tells her she was too afraid to open the door earlier to accept a delivery. The two embrace as Tamblyn prepares to leave, and McGowan whispers, “If I die, you have to keep all my work to be studied.” If that sounds crazy, well, what’s crazier is that McGowan is totally right. She should be paranoid; Weinstein had the fucking Mossad following her!

Over two hours, we follow McGowan from speaking engagements to interviews to private hotel meetings. At one point, we accompany her to a magistrate’s office in Virginia, where she turns herself in on charges of drug possession — she and her lawyer contend the drugs were planted, more of Weinstein’s handiwork. Most often, the viewer is her interlocutor: She peers directly into the camera, her big brown eyes daring us to confront the woman behind the headlines. “I’ve had the monster stuck to me for twenty years,” she says; McGowan has accused Weinstein of raping her in a hotel room at the Sundance Film Festival in 1997. Throughout the doc, she refers to him only as “the monster,” and when anchors say his name in clips of newscasts, it’s digitally altered to sound like gibberish. When his picture appears on the screen, his eyes are blacked out.

Citizen Rose is strongest at the start, when it juxtaposes McGowan’s present-day anguish with the media coverage of her as a young starlet in the late 1990s and early 2000s. Young Rose obediently perches on late-night talk-show couches, poses on the red carpet and peers out from the covers of magazines in skin-tight dresses, her long, dark hair framing her dimpled chin. The images are superimposed on top of each other, a hazy collage of manufactured sexuality; it’s a period she characterizes as “the selling of me as a bad girl.” What the Hollywood-media complex peddled as a come-hither, brooding gaze, McGowan reveals, is the “vacant” stare of a woman completely detached from her own self.

Now 44, McGowan seems to relish showing us what a real Hollywood “bad girl” looks like: We see her in her bathroom, shaving her head and singing along to her own music (in 2015, she released a single with the French electro band Punishment), two white sheet masks under her eyes like battle paint. We see her in the streets, marching alongside ordinary women demanding an end to domestic violence. We hear her speak at the Women’s Convention in Detroit, with an introduction by civil-rights activist Tarana Burke, the woman who a decade ago coined the phrase “me, too.” In her speech, McGowan calls Hollywood the “messaging system of your mind.” By the end of the talk, every woman in the room is on her feet, screaming and cheering. “My name is Rose McGowan,” she concludes, “and I am brave and I am you!”

Of course, not every woman in that convention center has the profile or the means to alchemize her trauma into a commercial venture like Citizen Rose. McGowan repeatedly tells the camera that she’s doing this for all the women out there who’ve been hurt. And while I don’t doubt the sentiment, I sometimes found it hard to take at face value — especially in a film that showcases how every person who crosses McGowan’s path, from Ronan Farrow to Asia Argento to some dude outside a gas station convenience store, congratulates her on her bravery. McGowan criticizes the Time’s Up movement — she tells the camera that the all-black outfits planned as a “protest” at the Golden Globes was just a PR stunt — that was launched by a group of powerful Hollywood women in the New Year with the goal of ending systemic workplace abuse; it includes a legal defense fund for women across industries. McGowan may have plans of her own that she doesn’t reveal in the film, but on its own, Citizen Rose comes off more as a promotional opportunity for her forthcoming book, Brave, than any outward-facing initiative. (E! also plans to run four more episodes of Citizen Rose in the spring.)

There’s a lack of context to much of what ends up on the screen, like the “Rose Army Retreat” we witness in Colorado in November 2017, or just what exactly it means to be a member of the “Rose Army.” At one point, McGowan takes a stab at a definition, explaining that Rose Army is a “secret code” that means “you think differently.” (The top Google result leads you to RoseArmy.com, where you can sign up to be on an email list.) She also says the name isn’t a reference to herself, but to the flower, because she once saw a picture of a rose pushing up through cracks in concrete. Also, they have thorns.

So, yes, my eyes rolled at some of this, and at the spectacle of a celebrity — one who is undoubtedly traumatized yet has access to support and a cheering public that the average victim of sexual assault does not — performing a kind of grief that too many women know all too well. And yet performance is a natural mode for someone who’s been onscreen since she was a teenager. McGowan has dared to enter uncharted territory for a woman in Hollywood — to go rogue like this and find that you have actual support, however self-serving the industry backing (the E! series, the book deal) may ultimately prove to be. I suppose McGowan’s critique of Time’s Up as a cynical PR fix could apply to Citizen Rose. There’s a clear difference of intent here, though: Hers isn’t to smooth away the rough edges of this moment as red-carpet solidarity might, but to call attention to them. And anyway, to say it’s unseemly for McGowan to profit off this moment seems fundamentally backward. This moment is happening in large part because of her refusal to sit down and shut up. The least we could do is listen to what she has to say.