Bill Gunn’s Revolutionary Ganja & Hess Gets the Restoration It Deserves 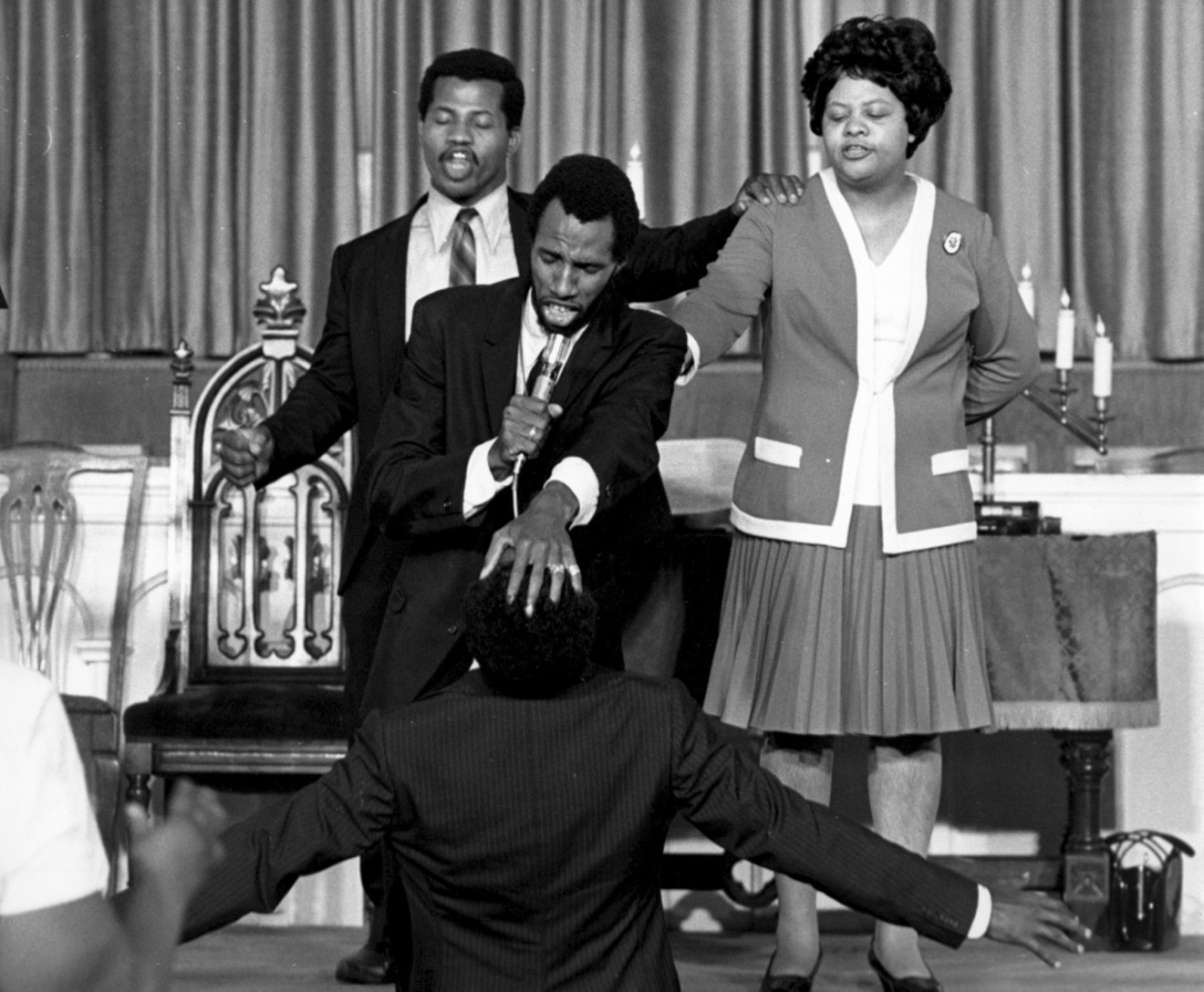 Sam Waymon (middle), who appears in Bill Gunn's experimental horror feature Ganja & Hess as the Rev. Luther Williams, also composed and performed the wildly imaginative score. Kino Lorber
When Bill Gunn’s experimental horror feature Ganja & Hess (1973) premiered at Cannes, it received a standing ovation and the critics’ choice prize, but when it came to releasing the film, its green producers, who’d commissioned Gunn to make a “black vampire” movie à la Blacula, balked. It wasn't the exploitation film they thought they’d be getting from the accomplished playwright and actor, despite a story about a prominent anthropologist, Dr. Hess Green (Duane Jones), who gets stabbed by his crazed assistant, George Meda (Gunn), becomes immortal, then falls in love with the assistant’s wife, Ganja (Marlene Clark). Instead, it was a fever dream of monologues, African song and mythology, American anxiety and meandering uncut scenes about personal pain and suicide. After Cannes, the film was recut from 110 minutes to a slim 76 and retitled Blood Couple, with the narrative refocused on Gunn’s most sensual scenes of blood and lust; the director’s name was removed at his request. The Museum of Modern Art, luckily, was given an original cut of the film, and from this original, Kino Lorber has restored Gunn’s vision in all its bizarre glory — and not without its faults.

The approach to the restoration of Ganja & Hess can be defined by one flaw Kino Lorber retained: a hair in the grate. In the first scenes of the film, after a prologue explaining the rules for this story’s particular vampirism, a preacher in a church talks about Jesus Christ to his congregation, while the voiceover of actor Duane Jones as Dr. Hess drones on about bodies and blood, his musings more sound collage than dialogue. A long hair appears in one shot, running up the lower left quarter of the screen. Removing it digitally would be simple for the restoration team — time-consuming, but simple. Yet the hair remains, a signal that this remaster will not be an “improvement,” like so many other films that become so polished in the restoration process that the grains get sanded away. Not here. What you see is what Bill Gunn saw, and what he saw was full of color.

The colors Gunn favors come from the natural world, particularly the reds of blood, the greens of nature and the browns in his actors’ skin tones. But in shooting with this palette, Gunn also crushes the blacks, so scenes of low lighting tend to feature Jones as a silhouette against his environment. Whether this is purposeful is no matter; the effect is all the more haunting when the bright greens of plants and vines in so many shots seem to be reclaiming Dr. Hess, as though he is no longer human but now the possession of nature.

Gunn eschewed exploitation’s tendency toward empty sensation and imbued the film with an undercurrent of realistic misery. Scenes often seem entirely improvised, so you wonder if there was a full script at all. Or if, say, as Meda philosophizes about seeing himself as both the victim and the killer in his own attempted suicides, Gunn was riffing on the dynamics of his own depression. The story can be difficult to track yet is also wildly intriguing; the characters present themselves as experts on their own psychology, as though even in madness they can contextualize why they are mad.

This is exemplified when Ganja explains why she’s decided to stay with her wealthy new lover Hess after she’s discovered that he’s keeping her husband’s body in his freezer and has possibly murdered him. She digs into her memory and relays a story about the day a slap from her mother woke her up: “That day I decided that I would provide for Ganja always, do what had to be done, take whatever steps had to be taken, but always take care of Ganja.”

Clark, who’s best known for films like Switchblade Sisters, Night of the Cobra Woman, Black Mamba and Gunn’s erotic thriller Stop, delivers a revelatory performance of power, fear and vulnerability. While her co-star Jones couldn’t have cared less about securing more film roles — this and his part in Night of the Living Dead were two of only eight he ever deigned to step out of the NYC theater for — Clark was still a film actress. It didn’t help her cause that almost all of her movies had delayed releases, meaning she was rarely asked for interviews or taken on press tours. Ganja & Hess faced an especially long road — not just to get on screen, but to be understood.

In a rare interview with Fangoria’s Chris Poggiali in 2000, Clark expounds on the ups and downs of the film’s initial U.S. release. She says she remembers the New York premiere and how she felt like the “star of the party” afterward. But the next day, critics published a barrage of negative reviews, decrying the elliptical approach to what on the surface seems a typical genre film. Clark was crestfallen — this character and film she loved so dearly was rejected. “They didn’t get it. Many critics believe that black people make very straightforward, literal movies — so Bill was an enigma to them,” she tells Poggiali. “They just did not understand what he had done.” Kino Lorber’s faithful remaster gives the critics a chance to reconsider and give credit where it’s due to this forgotten genre-subversion classic.
KEEP WESTWORD FREE... Since we started Westword, it has been defined as the free, independent voice of Denver, and we'd like to keep it that way. With local media under siege, it's more important than ever for us to rally support behind funding our local journalism. You can help by participating in our "I Support" program, allowing us to keep offering readers access to our incisive coverage of local news, food and culture with no paywalls.
Make a one-time donation today for as little as $1.