The sole authenticated photograph of Emily Dickinson (1830–'86) was taken when she was sixteen years old: The daguerreotype revealing a slight young woman with a searching gaze and the slightest hint of a smile as she holds a floral spray on her lap stands as one of the most famous portraits of an American writer. Paradoxically, this instantly recognizable image depicts a homegrown genius about whom so little is verifiable — and one who rarely traveled past the grounds of her family’s home. How could such a life be dramatized for the screen? (Onstage, the Julie Harris–starring one-woman show The Belle of Amherst opened on Broadway in 1976; the actress toured with and revived the production into the '00s.)

In his compassionate and intelligent Dickinson biopic A Quiet Passion, Terence Davies honors his subject by remaining true to this observation from the poet herself: “To live is so startling, it leaves but little room for other occupations.” Lucidly portrayed by Cynthia Nixon, Dickinson in Davies' film, even in the writer’s more anguished later decades, is ever alert and ablaze, sustained by family, friends and her own feverish mind. However circumscribed she was physically, Dickinson constantly exceeded boundaries.

Her contentious spirit is highlighted in the opening scene, as adolescent Emily (Emma Bell, who inhabits the role for the film’s first 20 minutes), surrounded by a dozen or so of her classmates at Mount Holyoke Female Seminary, dares to defy the school’s pious founder during an exercise meant to emphasize spiritual well-being: “I am not even awakened yet — how can I even repent?” The response, at once brash and eminently reasonable, typifies Dickinson’s exchanges with her interlocutors in A Quiet Passion; no convention or bit of received wisdom goes unchallenged.

But this most outspoken of young women, the middle of three children, was also an exceptionally devoted daughter and sibling. “I only want my family. It is not perfect. It is not paradise. But it is far better than anything I could know,” adult Emily tells a similarly forthright friend, Vryling Buffam (Catherine Bailey), an incorrigible coquette whose barbs and bons mots seem to anticipate Oscar Wilde’s a few decades later (“Going to church is like going to Boston. You only enjoy it after you’ve gone home”). More than just a graceful chronicle of a singular figure, A Quiet Passion richly portrays the joys of kin, a camaraderie vivified by the astute performances of those who play the poet’s nuclear brood, especially Keith Carradine as her father and Jennifer Ehle as Lavinia, Emily’s younger sister, whose inveterate cheer is sometimes eclipsed by her more saturnine sibling’s moods. 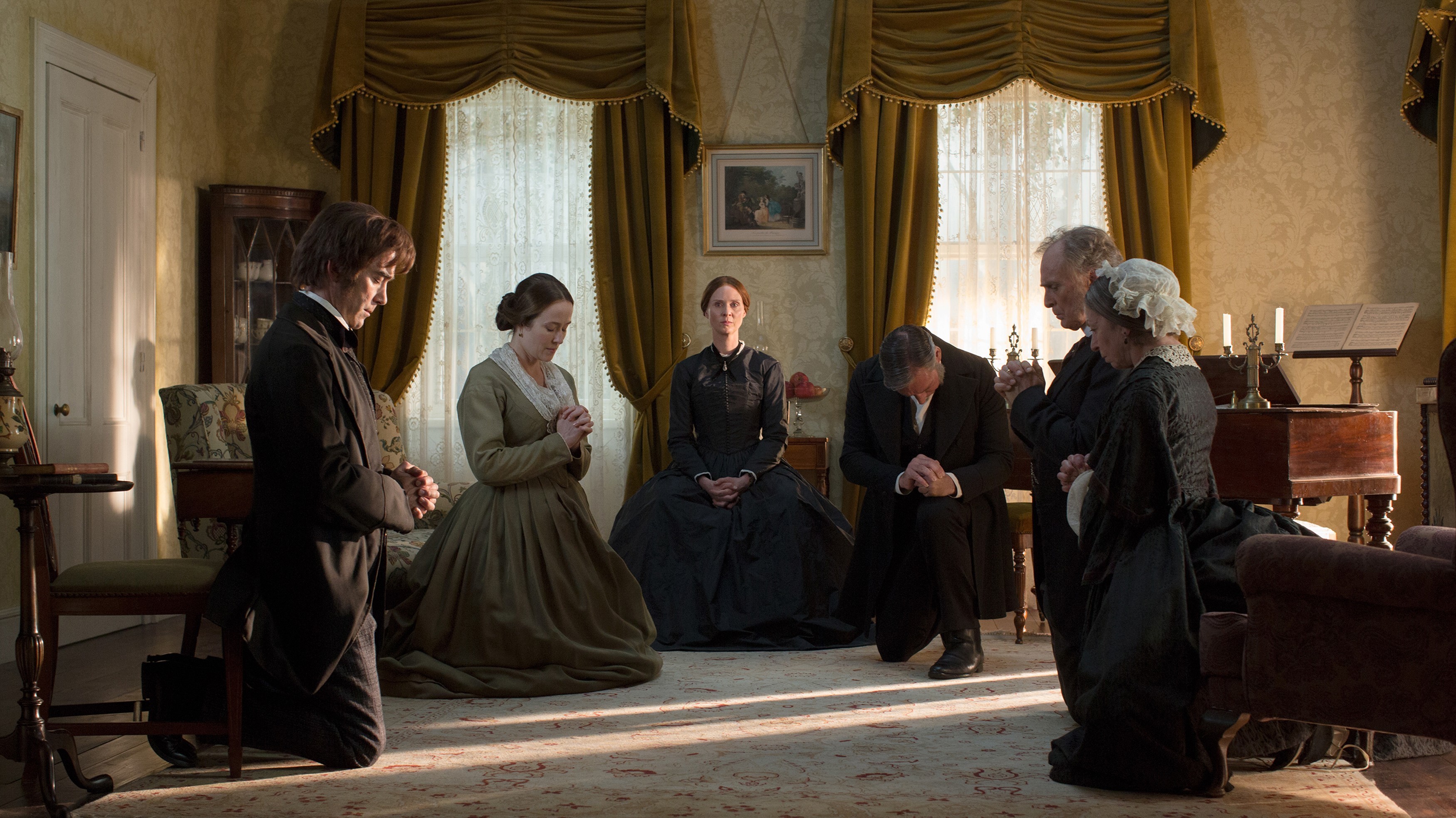 Courtesy of Music Box Films
The textured examination of family life in A Quiet Passion links it to the writer-director’s first two features, both inflected by autobiography. Distant Voices, Still Lives (1988) is first-person history at a remove: Davies, the youngest of 10 children born to a working-class Catholic family in Liverpool in 1945, imagines his clan in the years before he existed. In The Long Day Closes (1992), the filmmaker’s 11-year-old movie-mad surrogate finds in his own cramped, densely populated house the same magic that buoys him at the cinema.

A Quiet Passion, like those earlier films, is filled with moments of the camera slowly alighting on one family member then another, the Dickinsons gathered in the same room but each absorbed in her or his own activity or reverie. Davies' gift is for emphasizing the comfort and stimulation this cocooning provides Emily while also hinting at its potential for immurement, an eventuality realized in the last act, which covers the years when the writer rarely ventured past her bedroom doorway.

A Quiet Passion is Davies' first biopic, but it continues and expands the director’s shrewd literary adaptations, the genre that, save for one title, he has exclusively worked in since 1995. Just as Davies' majestic page-to-screen transfers The House of Mirth (2000) and Sunset Song (2015) are elevated further by the exceptional performances of the lead actress (Gillian Anderson in the former, Agyness Deyn in the latter), his deeply sympathetic, multilayered examination of one of this nation’s premiere poets — a legend largely considered unknowable — is made all the more nuanced by the woman playing her. Whether sitting silently at a desk, assembling the tiny hand-sewn booklets that contained several of Dickinson’s nearly 1,800 poems or engaged in badinage with a sibling or friend, Nixon is quick to reveal the wonder the writer saw all around her, worlds that only she could summon.

That elan shines through especially in Nixon’s reading of Dickinson’s poems, mostly presented in voice-over, though one of her best-known lines of verse — “I’m nobody! Who are you?” — serves as Emily’s words of greeting to her infant nephew. That line also provides the title of an exquisite exhibition devoted to the writer currently on view through May 28 at the Morgan Library and Museum. Among the many treasures of the show, which I saw a week after viewing A Quiet Passion: a lock of Dickinson’s hair, a bright auburn matched exactly by Nixon’s locks. The vitrine-enclosed tress may be the most corporeal artifact we have of the poet; both her body and soul are made ineradicable in Davies' lovely film.

KEEP WESTWORD FREE... Since we started Westword, it has been defined as the free, independent voice of Denver, and we'd like to keep it that way. With local media under siege, it's more important than ever for us to rally support behind funding our local journalism. You can help by participating in our "I Support" program, allowing us to keep offering readers access to our incisive coverage of local news, food and culture with no paywalls.
Make a one-time donation today for as little as $1.
Melissa Anderson