Canna City, a recreational dispensary in Commerce City. Jacqueline Collins
Colorado marijuana sales fell from March to April, according to the state Department of Revenue, but historical data shows that 2021 is set for one big year.

Despite April 20 (4/20) being one of the largest sales days or weekends of the year since marijuana was commercialized, April tends to see a dip in transaction revenue from March, staying flat or slightly dipping every year since recreational sales began in 2014.

Marijuana sales trackers attribute the flatline to an extra day on the calendar in March, along with a dirty little secret among dispensaries: 4/20 might actually drag April's sales total down. Although April 20 attracts a lot of customers, most of those purchases are relatively large as shoppers take advantage of bulk deals on the marijuana industry's own version of Black Friday and St. Patrick's Day, leading to a drop in transactions for the rest of the month.

Over $768 million worth of marijuana products were sold in Colorado from January through April of this year, according to the DOR, responsible for more than $143 million in tax revenue. That's 32 percent higher than the same span last year, and business isn't likely to slow down, as April to May traditionally marks a seasonal rise in marijuana sales. 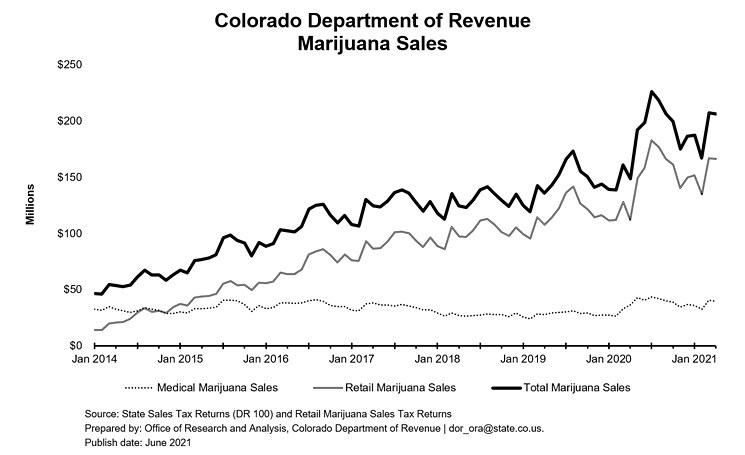 Colorado Department of Revenue
KEEP WESTWORD FREE... Since we started Westword, it has been defined as the free, independent voice of Denver, and we'd like to keep it that way. With local media under siege, it's more important than ever for us to rally support behind funding our local journalism. You can help by participating in our "I Support" program, allowing us to keep offering readers access to our incisive coverage of local news, food and culture with no paywalls.
Make a one-time donation today for as little as $1.