Dispensaries in California and Colorado might look the same, but what about their customer habits? Scott Lentz
Entrepreneurs and consumers have been holding their collective breath as California readies itself for retail cannabis sales, which that state's voters approved in November 2016. California expects to have regulations and license programs in place for retail cannabis businesses by early next year, though the exact date that stores will open is still unknown.

Despite the lack of retail presence, California's medical marijuana industry is spurring one of the largest legal pot markets in the country, medical or recreational. Several cannabis-industry studies have shown that California's market is already larger than those of Colorado or Washington, which both opened retail pot businesses in 2014. And even though they're in a medical-only market, California's cannabis consumers already display strong similarities to their Colorado counterparts, according to data from BDS Analytics – but on the recreational side.

Using sales data in the two states from March to July of this year, BDS found that California and Colorado both preferred flower, as well as similar varieties and strains. According to BDS, 55 percent of California's medical marijuana patients bought flower from dispensaries, while 47 percent of Colorado consumers did the same. However, hybrid strains cornered nearly a third of those sales in each state, and two strains – Blue Dream and Gorilla Glue – were among the four highest-selling strains in both markets. BDS also found similarities in California and Colorado's feeling on pre-rolls (not much: they accounted for just 5 percent of sales in each) and edibles purchasing habits. 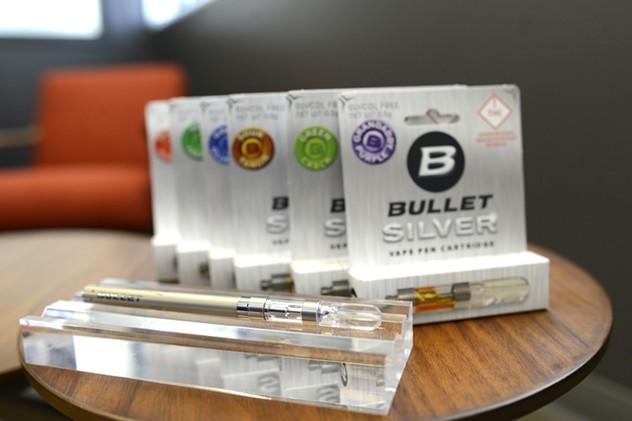 Vaporizer cartridges filled with THC distillate, like these Bullet Silvers, are quickly trending upward in Colorado.
Scott Lentz
Concentrates were a different story. While the broad definitions of what each state's consumers prefer match up, things start to differ with the specifics of those products. Coloradans like to dab, and the data shows it. Californians, on the other hand, prefer pre-filled cartridges of hash oil for vaping.

Concentrates for vaporizing accounted for 36 percent of concentrate sales in Colorado, good for the highest-selling extract – and still nowhere close to California, where the same category accounted for a whopping 61 percent. Here are the top three concentrates in each state:

California (average price per gram: $29.64)
Colorado (average price per gram: $25.33)
Distillate is also much more popular among THC vapers in Colorado than in California. According to BDS data, distillate-filled vaporizer cartridges made up 32 percent of the pre-filled cartridge sales in Colorado dispensaries, just 7 percent less than the top seller, CO2 and butane hash-oil cartridges. But in California, only 4 percent of cartridges sold were filled with distillate, while 84 percent were filled with CO2 and butane hash oil.

Pre-rolls, while selling at the same rate in both states, were largely filled with different types of cannabis. The vast majority of pre-rolls sold in Colorado (93 percent) were filled with standard buds and leaves, but only 69 percent of California's pre-rolls were filled that way, the data shows. That's because Californians like to add a little extra to their joints: For example, 31 percent of pre-rolls sold were infused with hash or kief.

It's important to note that although both markets are showing comparable trends, the sizes of Colorado and California's cannabis arenas aren't even close. Legal cannabis sales in Colorado from March to July added up to around $653.33 million, according to BDS, which pales in comparison to California's $1.13 billion during the same span – and the recreational market hasn't even opened there yet.

On the bright side, Coloradans continue to enjoy lower prices: The average price per gram of flower in Colorado ($8.15) was more than $3 lower than in California ($11.22), while concentrates and vaporizer cartridges were also several dollars cheaper per unit on average.