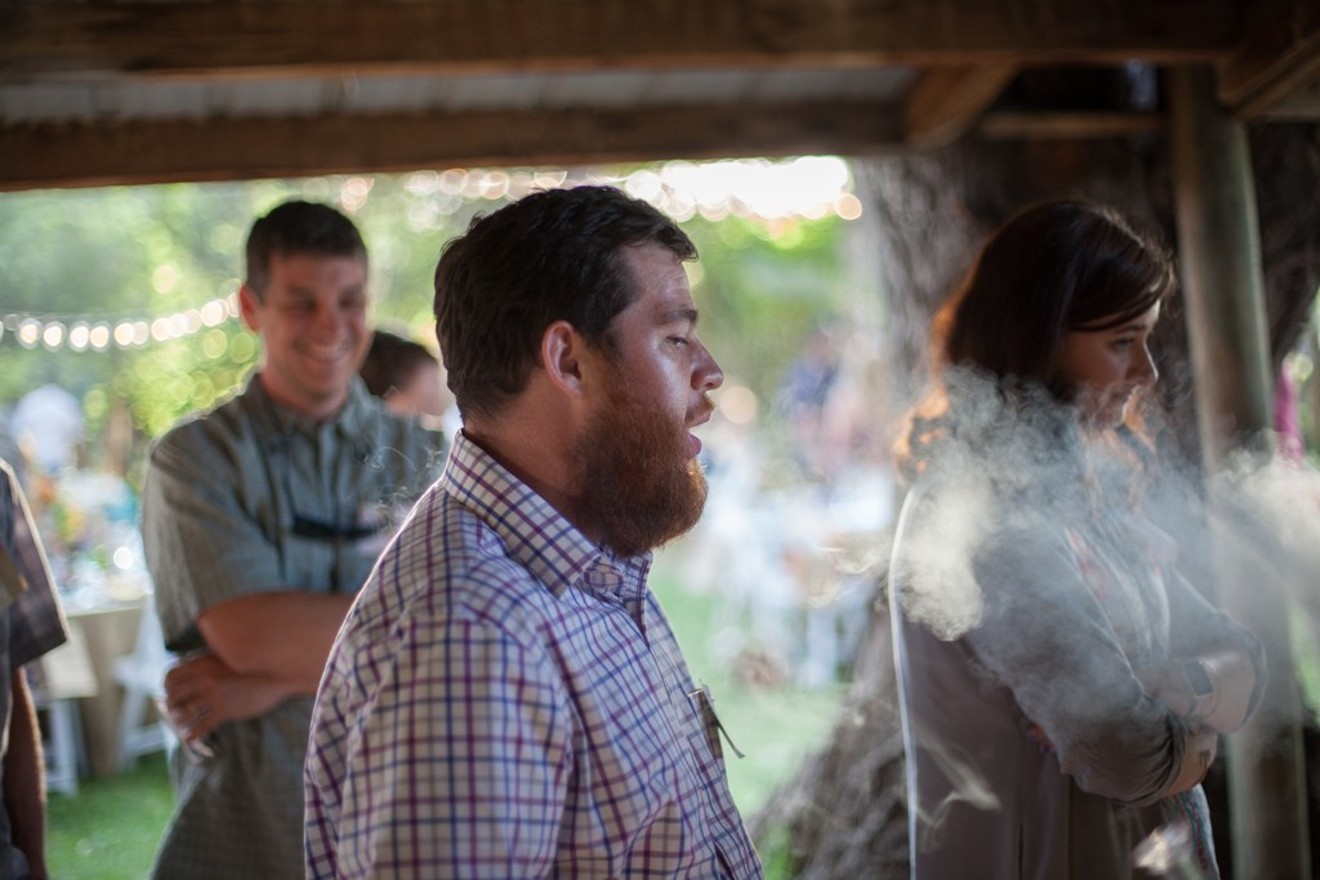 Patrons of a private cannabis consumption event in Longmont wait for a free dab. Jacqueline Collins
The City of Denver announced it was ready to accept applications for social cannabis consumption areas in late August, but no businesses have yet applied for a license. That may change soon, however, now that three local entrepreneurs plan to open a cannabis vaping lounge – once they find a location, that is.

In a video posted on their Facebook page over the weekend, Sterling Barrus, Jason Galeone and Taylor Rosean announced that they plan to open Denver Vape and Play, a vaporizing lounge for cannabis consumption. All three have experience in the cannabis or vaporization arenas: Barrus has been developing cannabis vaporizers for over a decade, while Galeone and Rosean have worked for several dispensaries in various capacities.

"We were kind of late to the game. We didn't hear about the movement until during the winter, and we've been developing the idea for a while," Rosean says. "Once we were in, we started reaching out and getting involved as far as we could."

The partners say they've been meeting with city officials to make sure everything is in order before they submit an application; they've also been working with attorneys at Vicente Sederberg, a well-known leader in cannabis policy that was instrumental in drafting Initiative 300, the measure voters passed last November that allows social consumption in Denver.

Their biggest hurdle, Rosean believes, will be securing written approval from a neighborhood organization in the area where they hope to open up shop, a requirement for any business applying for a consumption license. "We've been spending the better part of summer and the past year developing a good relationship and business model that would be accepted in their neighborhoods," he says.

Unlike already-established businesses that might be prohibited from allowing common consumption because of I-300's location restrictions, Denver Vape and Play doesn't yet have a physical location. This allows its founders to search for a location that's the required 1,000 feet away any school, child-care establishment, drug or treatment facility, city park, pool or recreation center.

Until the application is officially submitted, Rosean won't share which parts of town Denver Vape and Play has been looking at or which neighborhood groups it's been talking to, but he does say that possible locations are all in high-traffic areas, and that his team has an open invitation from several neighborhood organizations to submit its final business plan for review.

Denver Vape and Play founders Taylor Rosean (second from right) and Jason Galeon (right) meet with Denver Mayor Michael Hancock.
Denver Vape and Play
The proposed lounge will have a U-shaped bar where an attendant will load and operate around a dozen handmade vaporizers with disposable mouthpieces for customers. There will also be electronic nails available for concentrates, as well as vending machines with international food and simple, classic munchies like chips and sweets, Rosean says.

Because of the Colorado Clean Indoor Air Act, there will be no smoking allowed inside. "I think I prefer it like that, anyway," he says. "It's healthier for our customers and employees."

Denver Vape and Play expects to open in early 2018 if all goes according to plan, Rosean says. The company plans to launch a crowdfunding campaign on Indiegogo within the next week and will reveal more about the concept then, he adds.

Mutiny Information Cafe owners have also said they're interested in applying for a social-consumption license, and might host monthly parties with cannabis consumption. Like Denver Vape and Play, though, Mutiny has not yet submitted an application while it continues consulting with attorneys and city officials.