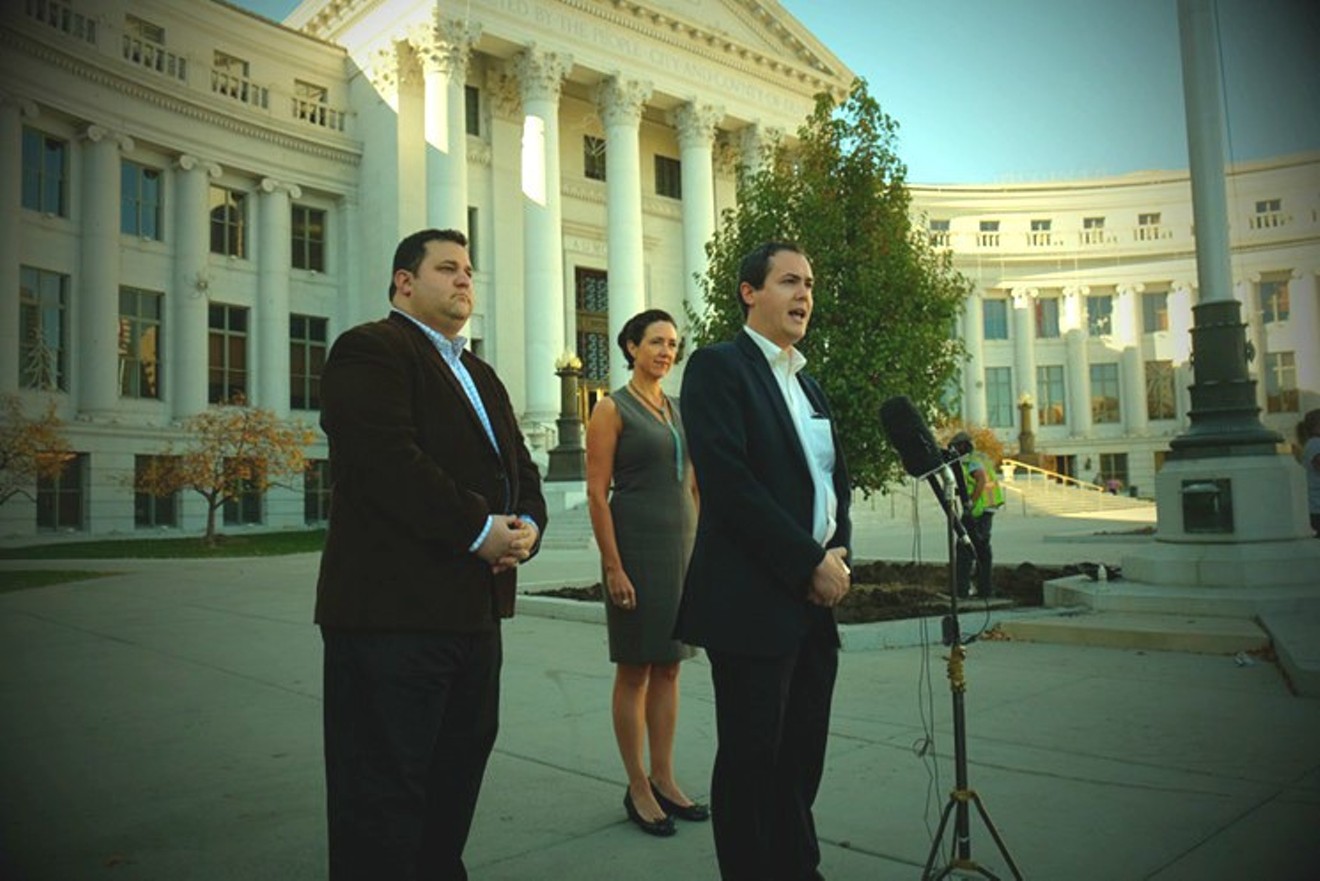 Emmett Reistroffer announces the passage of I-300 in November 2016. Kate McKee Simmons
Emmett Reistroffer was one of the authors of Initiative 300 and worked on the campaign to get the social-use ordinance passed last November. Now the event planner and policy consultant for Denver Relief Consulting serves on the city's Social Use Advisory Committee. We sat down with Reistroffer to chat about social use, the first committee meeting, and what he thinks about how the process is going.

Westword: The social-consumption committee had its first meeting last week. How do you think it went?

Reistroffer: I think the first meeting went very well. It was a productive dialogue, and it was a chance to hear a lot of different concerns from the stakeholders; I think we found some common ground. I don't think there was necessarily consensus on any of the proposed rules, but I believe we figured out where we can find consensus at the next meeting and at future meetings.

What topics do you hope to tackle in upcoming meetings?

We really think a lot of the concerns that come up are things that should be addressed by the neighborhood. These businesses have to go to their neighborhood group to get support to be able to get a permit. Also, the neighborhood group is able to add conditions to the permit, so they can discuss things like hours of operation, the style and nature of the events and what will go on at the facility. They can discuss additional building modifications if they need to build a different wall or a gate or whatever. Each place is unique to their neighborhood, so I don't want to necessarily support a bunch of rules that are going to tie our hands. We want neighborhoods to figure it out and work together, and ultimately, I think we're only going to see these permits in a few parts of Denver where there already is cannabis consumption and cannabis businesses and there's also a lot of creative culture in these areas. So I'm thinking of the Santa Fe art district, the RiNo art district, East Colfax, South Broadway as the main areas where the people want it, so I don't think there'll be a lot of resistance. I think that's where you'll see businesses get started.

The group mostly spoke about location restrictions. Can you give our readers a little insight into what the original intention was when you wrote I-300 and how things are shaping up now?

The intention was that a business would have to get support from their neighborhood before they could get a permit. So ultimately, that means the business will have to put together a really good proposal to get support from their neighborhood. Anyone who's involved in the neighborhood groups knows that these are not the most liberal organizations out there. They have not been advocates for cannabis, historically. In fact, they've been sometimes oppositional to cannabis businesses coming into their neighborhoods. But we think this was the right approach, because we don't want to just flip a switch and have cannabis clubs on every corner. We want it to be done carefully, something we can learn from and really kind of manage on a case-by-case basis, so having the neighborhood support, I think, will ensure that these only open in the appropriate locations where there are already people shopping in those areas, hanging out in those areas, that want this type of option.

It's a diverse group on the committee! There are a lot of stakeholders present, including a few people who spoke out against social use during the campaign. What issues do you think will arise as you work through more of the rules and regulations?

Well, I think there could be some efforts to make the program as restrictive as possible — and we think it's already very restrictive. So, again, every rule or suggestion that comes up, I want to think about first how that issue or concern can be addressed by the neighborhoods when they are considering permits. Whatever rules we pass in this committee, or whatever regulations we recommend to the licensing director, will be a baseline for the entire city. I just want to make sure it doesn't tie our hands or have inadvertent consequences. We've already seen that with state regulations and other types of laws, where we pass a rule that's meant to do this, but it ends up doing something completely different or causes another problem — so we have to be really thoughtful.

I think a good example of that at the first meeting was the suggested proximity rules on the whiteboard that were just merely suggestions, but they suggested that we prohibit 300 permits from being issued within 1,000 feet of each other and 1,000 feet from other marijuana businesses — and with over 400 licensed marijuana businesses in the city, it would seem like those rules would basically frustrate the intent of the initiative, because we would not have anywhere in Denver that would be eligible. I thought there was a fairly good consensus that we couldn't make those restrictions and prevent these permits from happening anywhere in the city — but also, one of those opponents spoke up and said that it could be worthwhile to discuss the concept of a green zone and talk about the concentration of these places, because actually there could be a big benefit to having these locations next to each other and a concentration of them to encourage people to be responsible and be social without driving under the influence and that sort of thing. So I think there are benefits to having concentrations, and the initial suggestion rules for all the proximity restrictions simply went too far.

Was that the first time that you considered a green zone or something similar?

No, not really, because I thought through this neighborhood-support provision in our initiative, and that's really what we thought we'd see happen in Denver: We would see a lot of neighborhoods not be interested. There are just a lot of residential neighborhoods where this type of thing doesn't make sense. There's not a lot of bars in certain neighborhoods, not a lot of entertainment — they want to be quiet neighborhoods, so that makes sense. But RiNo Art District is a great example: If you look at the voting results, some of those precincts had some of the highest concentration of support in the city, so overwhelming support from the people who live there, overwhelming support from the people who hang out and shop there, and it's a pretty area where there are artists and creative things happening already on a daily basis, and we think there's a shared experience with a lot of these creative activities with cannabis. A lot of artists use cannabis, they accept it, it's just a big part of our culture here, so we think this would make a lot of sense in the art districts, where there could be quote-unquote a green zone and have five or six places on the same block.

This has never been done before.  Do you hope social use will take off the way recreational legalization has?

We already know that there were provisions for social use in the California and Nevada initiatives that passed this year. It's also being debated in the Oregon legislature and was debated in Alaska and pretty much stalled [there] based on the legalities up there, so they're still working through it. It's a little trickier than that first step into legalization, I think, because it's not just the product, it's the behavior. And it is a kind of normalization of that behavior, and you can still see that kind of prohibition resistance in the community from people as they think about that. They're not really comfortable. They know it's legal, they're living with it, they might not be happy with it, but they don't want to take any more steps in that direction.

But I think that's becoming more and more a minority of the population, and we want to incorporate their interests and respect their rights in these polices. That was always our intention, and that's why I think Initiative 300 was a very conservative approach with the neighborhood-support requirement, because we want people who don't like cannabis to enjoy Denver just as much as people who do like cannabis. We should all get to share this city and enjoy it and walk down the street and be happy with it, so, you know, we're trying to present a proposal that respects their rights and does that in a meaningful way that also protects the rights of those who want to use cannabis.

What are you most excited about for the upcoming meetings?

I look forward to hearing more from Denver police and fire and different stakeholders in city government. I think it's really important that we all work together right now, because we're able to get ahead of the curve and figure out a lot of these issues before they occur in reality — just by talking about them. I also think we're ready to do this. Even with some opponents on the committee, I felt really optimistic coming out of the first meeting that we're going to get this done, we're going to have permits available by this summer, and by the end of 2017 we should have consumption venues somewhere in Denver.

The next social-consumption meeting runs from 9 to 11:30 a.m. Wednesday, February 8 , at the Wellington Webb Municipal Building, room 4.G.2. It's open to the public; find out more here.