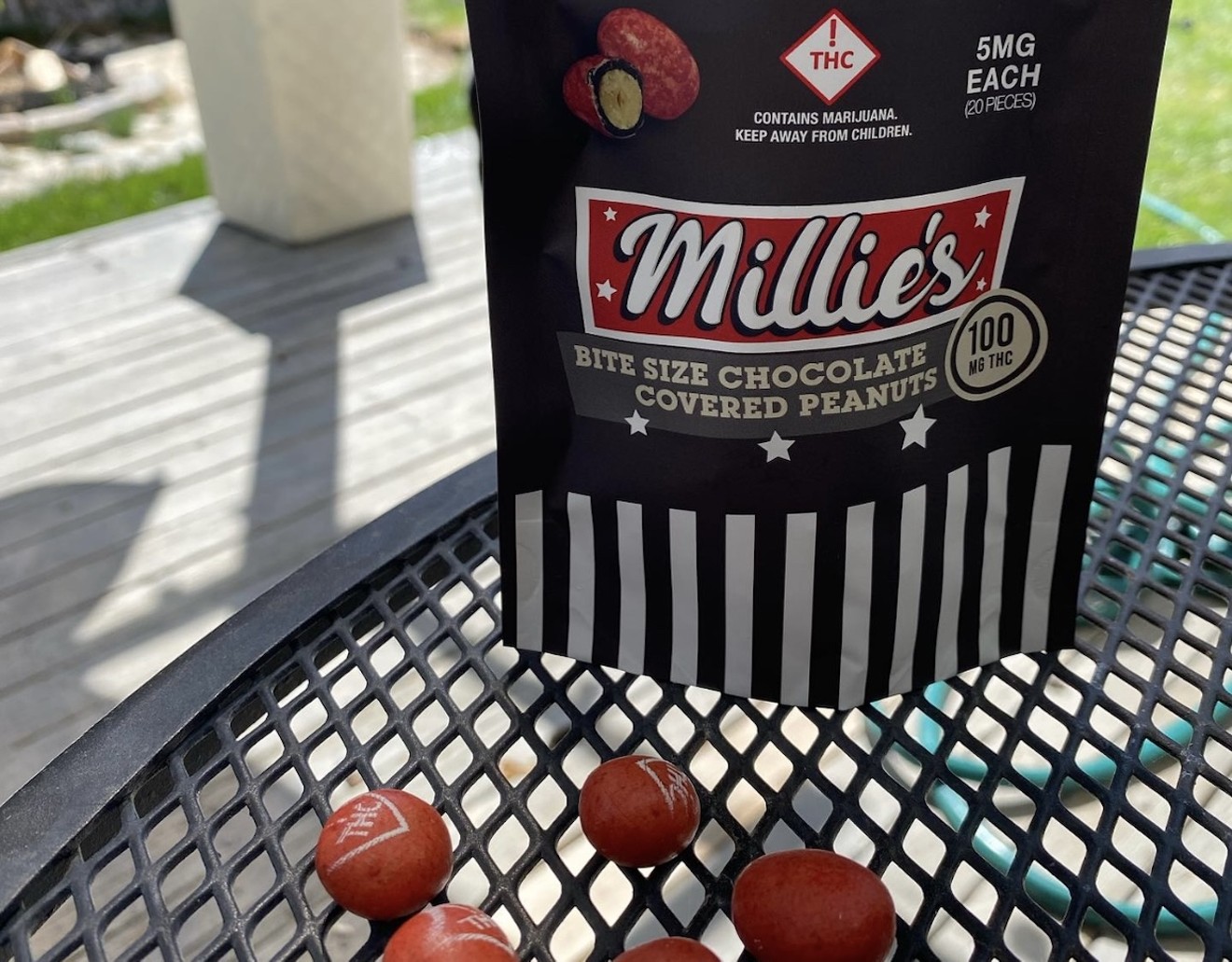 At 5 milligrams of THC, Millie's chocolate covered peanuts are dangerously delicious. Courtesy of Millie's
Edibles are going through something of a boring period. Gummies are dominating dispensary shelves, and the callbacks to other treats have become few and far between. Enter Krystina VanCleef.

A published edibles chef who's worked with some of Colorado's largest cannabis brands, VanCleef wanted to create her own line of dispensary edibles. So the former pastry chef launched Millie's, a nostalgia-focused cannabis candy company that currently specializes in chocolate-covered peanuts (think M&Ms) and Skittles-inspired fruit candy.

Evoking drive-in movie theater snacks, Millie's gives today's cannabis users a sweet taste of the past...but VanCleef isn't scared of the future. Now hard at work in the Millie's lab while writing another cookbook, she took a break to sit down with us and talk about her infused goodies.

Westword: How did you start mixing cannabis and food as a real profession?

Krystina VanCleef: I've been working in cannabis and developing products for over a decade. I started in Colorado around 2011 with some medical marijuana products, and really started getting into it around 2013. I developed products for Blue Kudu, designed the Green Solution's product line and developed their entire kitchen and canning operation. From there, I went on to do product development for LivWell and worked on some gummies, hard candies, chocolates, tinctures — that sort of thing. I've also done a lot of work for some [multi-state operators] and consulting in the industry.

Then I published my first cookbook in April 2019. I really wanted it to be in line with how the cannabis industry is and where it's going. Most of the cannabis cookbooks use cannabutter, and there's no real dosing formulations and calculations. It was sort of just "add some pot to brownies and hope for the best." So my book doesn't have cannabutter, and it only calls for distillate, isolate and more modern extracts on the market today. I'm working on writing a second cookbook, which will hopefully go to publishing in December. That one will focus even more on innovating technologies in the edibles industry, like tableting, water-soluble technologies, transdermals, more improved gummy recipes, rosin and that type of stuff.

Were you always into cooking, or did cannabis bring you into that world?

Oh, I've always been into cooking. My parents owned a restaurant. I grew up working in restaurants and went to culinary school. I have food science and confectionary art degrees, and worked in high-volume fine dining before getting into cannabis. In my previous lifetime, I was an award-winning pastry chef.

As a former pastry chef, what do you think of the state laws stopping you from making fresh cannabis-infused goodies?

There are baked goods in the cannabis industry, but I don't think any of them are done that well yet. Baked goods have to be fresh, right? That won't change until packaging regulations change and we have some sort of consumption lounge with something like a small bakery; that way, you can have treats that are made fresh daily. I think that will happen eventually, but right now the challenge is making baked goods and keeping them fresh. I helped the Green Solution come up with a package design to help baked goods stay fresh with thermal-form packaging that's nitrogen-flushed. It completely seals them, like a Lunchables container, which is a way to sort of get around that right now.

If the laws ever allowed it, would you try to open something like a cannabis bakery?

Probably not. I started Millie's because I was always developing what everyone else wanted me to develop. I obviously had some say, but I did save the best ideas for myself [laughs]. I launched Millie's so I could control everything —  the product design, branding, the look and feel, taglines and all of that stuff. Millie's will always be hand products, so we won't have a plain chocolate, baked good or regular gummy.

What other products do you have in the works?

We currently have the Skittles-type fruit chews, peanut M&Ms, and we're about to launch a milk chocolate M&M to go with our dark chocolate version. We're also launching some rosin products, and we're trying to come out with a peanut butter cup M&M candy, like Reese's Pieces. Down the road, we'll be doing a jelly-bean-style product, and some other nostalgia candies like Mike and Ike.

We also might do some collaborations with other brands, like adding our M&M candies to Hot Box's [dispensary] brownie mix.

What made you want to go down the nostalgic-candy path?

I always felt like there's a large portion of edibles consumers, such as older consumers and people newer to cannabis, who might like our products and packages. They're nostalgic and tried-and-true products that can resonate with people and bring back old feelings. We use the same chocolate used by world-renowned chocolatiers, and try to use only high-quality ingredients. No titanium dioxide, dyes or corn syrup. Doing that appeals to everybody, and since both products are microdosed, fast-acting and don't melt, you can choose the experience.

Any at-home recipes in your upcoming cookbook you're most excited about?

I'm constantly trying to be creative for this one. I'm doing something like a milk jelly, which is a cross between a caramel and a gummy. And more spins on classic favorites. I don't know if you remember Cream Savers, but I'm working on something like those. I've been playing around with some licorice ideas, too. I like to look to the confectionary industry and reverse-engineer what people like, whether it's Starbursts or Listerine strips.
KEEP WESTWORD FREE... Since we started Westword, it has been defined as the free, independent voice of Denver, and we'd like to keep it that way. With local media under siege, it's more important than ever for us to rally support behind funding our local journalism. You can help by participating in our "I Support" program, allowing us to keep offering readers access to our incisive coverage of local news, food and culture with no paywalls.
Make a one-time donation today for as little as $1.