A Fantasy Diet from the Bronnor Corporation's Pot-Infused Factory 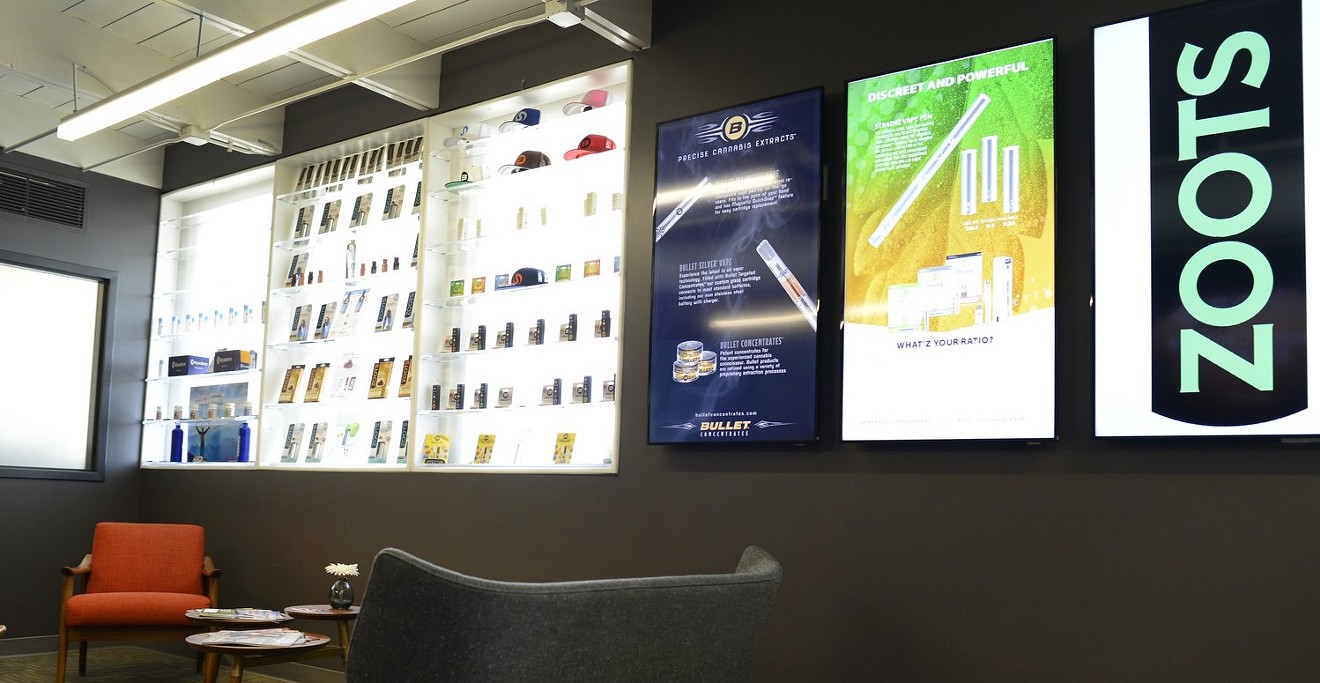 For a stoner, walking into the Bronnor Corporation lobby is like walking into Willy Wonka's chocolate factory. Scott Lentz
Instead of creating its own edibles, tinctures, topicals and vaporizer cartridges, the Bronnor Corporation makes them for other companies that don't have manufacturing facilities in the state. All of that deal-making has resulted in quite the fantasy factory up at 4809 Colorado Boulevard, which is evident the second you set foot inside the lobby. It's hard to pick just one item to focus on; this place manufactures an assortment of creations that could either take you to the moon or get you ready to knock out a full day of work and then cross off a list of errands afterward.

I was lucky enough to visit the factory recently when photographer Scott Lentz captured the smorgasbord of pot-infused products that are churned out each day. Between products from Bullet Concentrates, Medamints, Myaderm THC and Zoots, you could create an entire cannabis regimen – and that's exactly what I did for two days. What else was I supposed to do with a goodie bag, give it away? Here's my fantasy diet:

Morning: I started the day with a ZootBlast, a shot of yerba mate infused with thirty milligrams of THC. The shot, apply named "Carpe Diem," kicked in about an hour after I drank it, pulsating my heart for about five minutes before my body settled down. The burst of energy gave me a can-do vigor that I usually don't have at 10 a.m. on Saturday, and the edibles high allowed me to harness that energy into productivity rather than the aimless wandering I've been known to do after too much caffeine. While I wouldn't recommend taking the entire shot before work or if you have a low tolerance, splitting it in half makes for a helluva micro-dose.

Zoots Carpe Diem shots come in ten- and thirty-milligram doses.
Scott Lentz
Afternoon: Bullet Concentrates is Bronnor's partner for distillate vaporizer products, which have become all the rage among the hash-pen crowd. Creating a reliable vaporizer cartridge has proved challenging for even the well-established concentrate brands, however; Bullet's take on the cartridge is a little less discreet because of its clear casing and unique mouthpiece, but the quality and consistency are solid. While I'm not a huge fan of reintroducing terpenes into concentrates for vaporizing (the flavor is rarely authentic) — which Bullet does for its strain-specific products — the flavor enhancement is kept to a minimum.

My afternoon delight from Bullet came in the form of a Green Crack cartridge. The flavor was mild, though it could be much more present if the battery temperature were turned down. The potency was intense, however. Users have a tendency to underestimate hash pens when they first hit them, and a distillate is even more dangerous. Start small, or you'll be hacking out a lung in public.

Evening: After already consuming enough THC to put Jimi Hendrix to bed for a day, I didn't need much to calm down, so I popped a few indica Medamints. The THC-infused mints come in five-milligram doses, making them easy to regulate. My Medamints flavor was infused with myrcene, a terpene found in cannabis and other plants like hops and mangoes, so choosing mango berry as the flavor makes sense – but that doesn't mean it'll taste good. The flavor was bitter, hash-y and would be tough on the tastebuds if you wanted to eat more than one or two at a time.

The effects checked out, though. Fifteen milligrams was more than enough to gently relax me to sleep without getting me too stoned, and they kicked in within an hour. The other Medamints indica flavor, vanilla mint with chamomile, might be more up my alley. 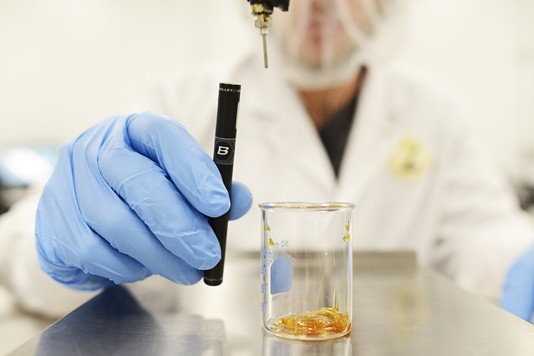 If oil is black gold, what does that make this? Amber gold?
Scott Lentz
Day Two

Morning: Zoots makes much more than energy shots, with a lineup of cookies, candies and infused drink enhancers to get you through the day. Dessert for breakfast is a perfectly nostalgic way to enjoy the final mornings of summer, so I nibbled on some caramel espresso brownies infused with ten milligrams of THC (five milligrams each), though I couldn't taste it. Although smaller-dosed edibles aren't the best for high tolerances, the lack of hash oil or infused butter creates a much more authentic taste without the earthy overtones.

Still craving sweets, I washed down my brownies with a glass of strawberry-orange-banana juice enhanced with a few Zoot Drops. The mandarin-lime-flavored liquid drink enhancer, which measures five milligrams of THC per capful, added a sharp citrus tartness to my morning glass, readying me for the day in a way that Tropicana — or even Folgers — could never accomplish. The concentration of THC in each small drop makes it an easy shot of cannabinoids for those looking for a quick hit, but Zoot Drops are much easier to enjoy mixed in a drink or cocktail. Think of it like Mio, Kool-Aid or any other concentrated liquid for drinks — but with a definite twist.

Afternoon: Bullet cartridges had proved themselves potent and reliable on my first Bronnor diet day (and many days thereafter), but I was much more interested to see how the disposable pen worked. Unlike cartridges, disposable pens have been consistent from the beginning — consistently bad. Known for short lives, terrible inhalation and dying if too long unused, disposable hash pens are usually found in the clearance bin. However, new advancement in vaporization and packaging technology has made disposable pens worth another look.

While EvoLab has beaten Bullet to the punch in releasing a quality, reliable disposable pen, the Bullet disposable distillate vaporizer is one of the best I've come across. Bullet's new method of packaging, which Bronnor keeps close to the vest, has enabled enough air flow for even the heaviest dabbers to get a strong buzz. And, oddly enough, I think my Sour Tangie disposable tasted better than the cartridge, which could mean I was vaping the cartridges at too high a temperature at three-plus volts.

Myaderm THC cream on display at the Bronnor facility.
Scott Lentz
Evening: Already a little aloof from one hit too many from the disposable pen, I wasn't in the mood for any more psychoactive effects. But some high-CBD cream was just what the Stoner ordered for a stiff shoulder and neck. Myaderm THC, a transdermal cream infused with cannabinoids, is the house topical specialist at Bronnor. With each squeeze, or "pump," of the Myaderm bottle, you should get about five milligrams of THC and two milligrams of CBD. While two pumps wasn't as fast or numbing as Icy Hot or Bengay, the Myaderm did provide a soothing effect, as though someone was gently massaging my painful areas with a warm towel.

As a spry, barely-out-of-shape person in his twenties, I don't need daily doses of Myaderm as much as I do Bronnor's recreational products, so I gave it to my girlfriend, who has chronic elbow pain. She reported less burning pain than usual after two days of application in the morning, and got through her much-dreaded day of moving into a new home with minimal discomfort. My next move might be giving it to my stubborn dad, who has a hurting back that's more stubborn than he is, without telling him what's really inside.