A 14,000-Square-Foot Vinyl Pressing Plant Is Coming to RiNo 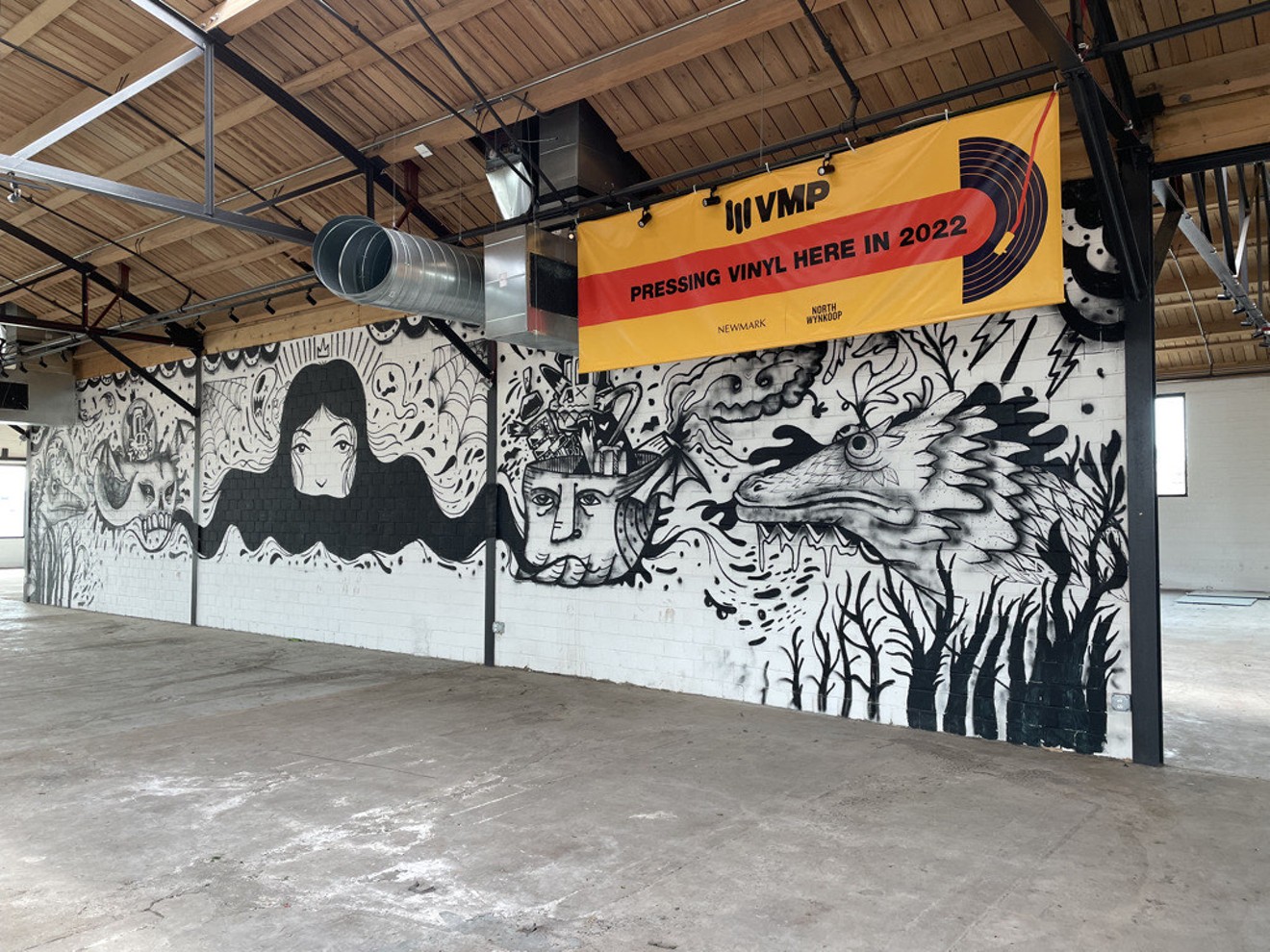 The future location of Vinyl Me, Please's RINO pressing plant. Vinyl Me, Please
Since 2007, the vinyl record industry in the United States has grown year over year in a fairly linear fashion. That is, until the past two years, when it went parabolic. In 2020, the industry started out producing around $550 million in new sales, rocketing to a little over a billion dollars in 2021.

The explosion in demand led Vinyl Me, Please, a Denver-based record club, to announce that it's opening a 14,000-square-foot, state-of-the-art vinyl pressing plant right across from the Mission Ballroom in RiNo. The facility will be run by vinyl manufacturing stalwart Gary Salstrom and promises to be an audiophile's paradise, offering tours, a full bar and daytime cafe, listening areas and other immersive experiences. The plant will also have a plating operation, where it will lathe the stampers that press the records — one of only a handful of places in the country capable of doing so.

“What we've seen is, essentially, the demand for pressing vinyl over the last two years far outpacing supply for pressing records,” says Vinyl Me, Please CEO Cameron Schaefer. “About a year ago, we were really digging in on this analysis, because obviously, the vinyl supply chain was pretty critical to our business. And as we started interviewing heads of major labels and heads of pressing plants and distributors, we learned that last year at this time, there were about 300 million units of pressing demand worldwide, chasing about 150 million units of global capacity.”

Vinyl Me, Please saw that it was going to take two to three years to move through the global vinyl backlog. As a company that relies on pressing plants to press the custom, commemorative vinyl that it provides for its record club, the team members realized they were in a bind. They began researching whether it made sense for them to either buy an existing pressing plant or build one themselves. The analysis surprised Schaefer: It would actually be a better business decision to build Vinyl Me, Please its own plant. So in the summer of 2021, the company started putting together the people needed to make the plant a reality.

That's where Salstrom came into play. Until recently, he had been the general manager of Quality Record Pressings (QRP) in Salina, Kansas, a plant renowned worldwide for its high-quality pressings. To Vinyl Me, Please members, pressings at QRP are a gold standard that set the bar for all other pressings. Schaefer says that he once asked Salstrom why his records are so much better than everyone else's, to which he replied, “I throw away more than most plants.”

Salstrom's career is an illustrious one. Over the past forty years, he’s been responsible for managing plants including Wakefield Manufacturing, which pressed albums like Fleetwood Mac’s Tusk, and Record Technology Inc (RTI), which manufactured albums by acts such as the Beastie Boys, the Eagles and Tortoise.

Initially, Schaefer took Salstrom to some of the scouting locations and asked him if Vinyl Me, Please would be able to press the same-quality records as he pressed at QRP. “I was expecting him to either tell me, ‘Yeah, I think we can,’ or ‘No, it's going to be tough,' or whatever. And what he said is, ‘Well, I actually think we can do even better,'’’ says Schaefer. “And basically, we had told Gary from the get-go that, 'If you'll do this with us, we're going to just try to provide you with every single thing you need to realize your dreams of pressing the best records ever made.'” Floorplan's for Vinyl Me, Please's plant.
Vinyl Me, Please
Acony Records co-founder David Rawlings is also a partner in this endeavor, and will serve as the plant’s "chief groove officer." “Dave and Gary have worked together on his projects for years. So the minute that he found out Gary was going to be coming to join VMP to build out this plant, he basically said, ‘What do you need? I want to be involved,’” says Schaefer. “It's funny, because you hear those two talk so passionately about vinyl, sitting there talking about the chemical formulations of the PVC compound, which they're always doing custom blends of and testing of. So I mean, they're in the weeds on it at a level that I think would kind of blow people's minds.”

However, working with polyvinyl chloride (PVC) isn’t without its environmental concerns. Greenpeace calls PVC the “single most environmentally damaging type of plastic.” It's a problem that Schaefer recognizes and is trying to remedy. First, he says, manufacturing domestically will save a lot in terms of shipping, which Vinyl Me, Please claims will reduce its carbon footprint. Additionally, the company is looking at “green vinyl,” a type of vinyl record that uses sustainable processes and recycled materials to mold the disk.

“I think that over the next few years, you're going to see a lot more development [in green vinyl],” says Schaefer. “Vinyl as an industry has been super under-invested in it up until recently. And so there hasn't really been much funding going toward trying to find alternatives, because frankly, everyone just kind of viewed it as a super-niche industry that maybe was more of a trend. And now I think that people are realizing that there's some longevity here. You're starting to have people invest, and part of that investment is figuring out more eco-friendly ways to do vinyl.”

Green vinyl’s biggest stumbling block thus far has been sound quality, which is paramount to people who drop big money on vinyl and the equipment that plays it. "Most consumers haven't been willing to sacrifice sound quality to use a different material," Schaefer says. "But like I said, I think what we're seeing is people are starting to really make some advances in that area. And it's certainly something that we're wanting to be a part of and are keen on.” This commitment to pleasing the company's customers while also being cognizant of the realities of the industry is central to Vinyl Me, Please’s operations.

It was also important to make the space more experiential. “What we're trying to do is create those experiences with music on a monthly basis for our customers," Schaefer says. "And so we've always viewed the experience and the idea of exploring music together as the ultimate goal."

At the new plant, visitors will be able to take a tour and see firsthand how the records are made. They’ll be able to witness the entire process, from pressing to quality control, packing and shipping. At the end of the tour, there will be a shop where tourists can buy records pressed at the plant and an area where they'll be able to listen to their records with a cocktail from the bar.

Schaefer says his team is excited about the possibilities with the plant being right across from the Mission Ballroom, as the company has had a long relationship with AEG. “A lot of the artists that come through are artists that we have already partnered with on past projects or are planning to do so," he says. "So I think there's going to be a lot of opportunities to bring artists over to the facility before and after a show to do all kinds of stuff, like meet-and-greets, live sets, private parties and things like that.”

The Vinyl Me, Please plant will start its buildout in June. The company estimates that the plant will be operational by October, with the bar, lounge and tour being ready by the first quarter of 2023.

Find more information at vinylmeplease.com.
KEEP WESTWORD FREE... Since we started Westword, it has been defined as the free, independent voice of Denver, and we'd like to keep it that way. With local media under siege, it's more important than ever for us to rally support behind funding our local journalism. You can help by participating in our "I Support" program, allowing us to keep offering readers access to our incisive coverage of local news, food and culture with no paywalls.
Make a one-time donation today for as little as $1.